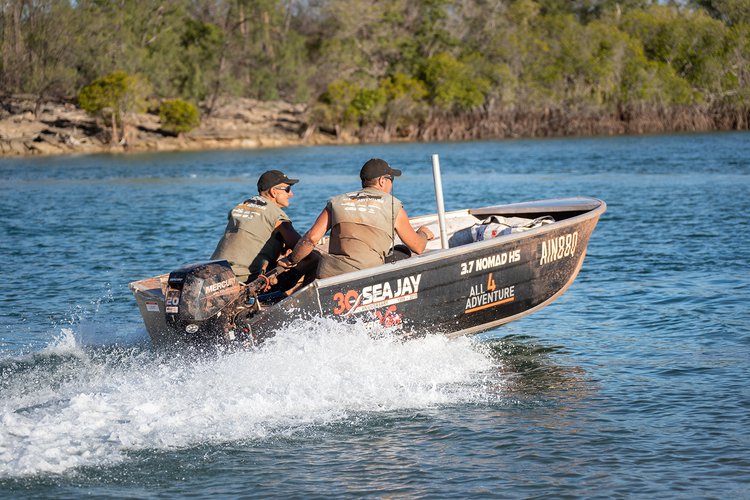 Mercury Marine is excited to announce its new partnership with the renowned All 4 Adventure team.

Exploring the harshest and most beautiful parts of Australia for more than a decade, Jase Andrews and the All 4 Adventure team have built a legion of fans by continually pushing the boundaries of where they can go and what they can do – on both land and water.

And now, whenever they hit a lake, a river, or the open ocean they are going to be propelled and protected by Mercury outboards.

“Obviously, when we select our equipment we have to put a lot of thought into it,” said host, Jase Andrews who’s spent most of his life traveling into and through the most remote regions of Australia.

“We love pushing the envelope and that means we have to have the best equipment - equipment that not only does the job but that you can absolutely trust as well.

“Mercury has outstanding reliability, which for us is a must. But Mercury engines tick a lot of other boxes too. Weight is a killer for us, and Mercury has a fantastic power-to-weight ratio and their fuel economy is right up there, so we can go further... which is what the show is all about.

“We’ve got a new member of the team joining us for Season 11 who’s no stranger to the fishing scene: he’s a die-hard fisho! I know that once on the water, myself, Simon and our new mate are going to really appreciate how quiet Mercury engines are.”

When All 4 Adventure Season 11 hits screens around Australia later this year, Jase and Simon and the rest of the crew will have two 150hp FourStrokes on the back of their Sea Jay 7.2 Pursuit GS, a 50hp FourStroke with a Mercury Big Tiller on their Sea Jay 4.2 Avenger, and a 20hp EFI FourStroke on both of their 3.7m Nomad tinnies.

“We’re really excited to be teaming up with the guys from All 4 Adventures,” said Anthony Brown, Marketing Manager at Mercury Marine.

“Anyone who knows what Jase and Simon get up to knows they need the very best engines, and that’s where Mercury comes in.

Mercury FourStroke are designed for less weight and high displacement, so they generate abundant torque and immediate power. And because they don’t have to work as hard as heavier engines or those with lower displacement, they make boats plane faster and accelerate better with optimal fuel efficiency at cruising speed.

“We absolutely love what we do, making the best 4X4, fishing and adventure show on Australian television and there’s no doubt these Mercury are going to play a big role,” Jase said.

To check out Jase, Simon and their amazing journey’s, just go to all4adventure.com or visit https://unleashed.tv/