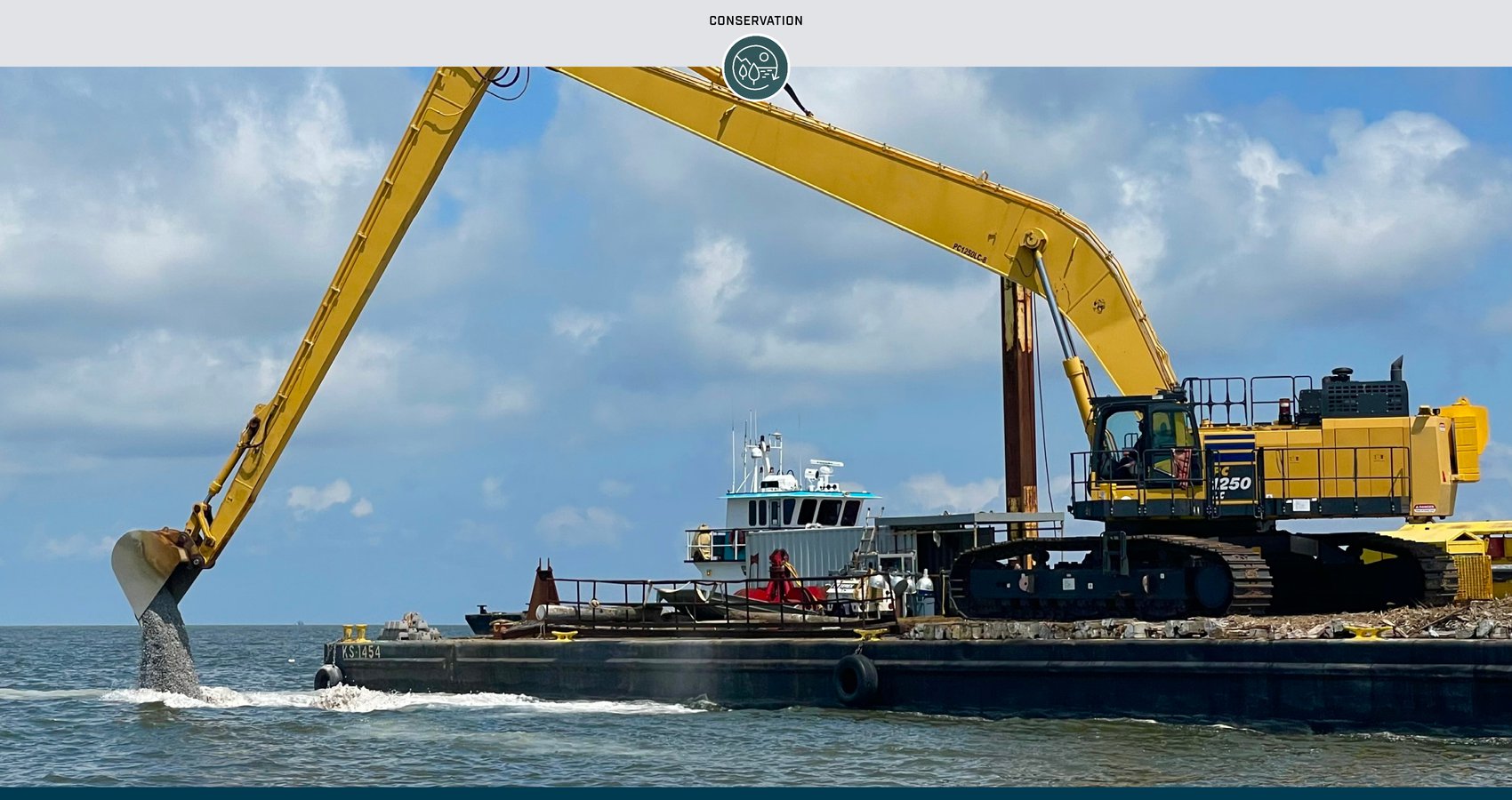 More than 4,000 oil rigs have been constructed in the Gulf of Mexico, one of the world’s most diverse and valuable ecosystems.

A beneficial byproduct of those platforms is the generation of thriving fish habitats as oysters, mussels, barnacles, sponges, corals and other organisms attach themselves to the underwater portions of the rigs, providing food and shelter for a variety of small fish. Those small fish soon become dinner for larger fish that are eagerly sought by anglers who arrive by the boatloads.

However, oil deposits don’t last forever and non-producing platforms, commonly referred to as “idle iron,” are eventually removed due to serious safety, environmental and navigational risks. As each defunct rig is removed, the accompanying fishery also disappears – much to the disappointment of anglers.

But ongoing projects by the Coastal Conservation Association of Louisiana (CCAL) provides a solution that can right the ship.

CCAL is a nonprofit organization dedicated to the conservation of Louisiana’s marine resources. Founded in 1983, CCAL has been instrumental in banning gill nets in state waters, establishing redfish as a gamefish, ensuring good stewardship of Louisiana ‘s coastal resources and building life-sustaining artificial reefs.

Creating healthy fisheries through the construction of artificial reefs where oil rigs once stood or atop former oyster beds and islands is CCAL’s most impactful work today, according to Rad Trascher, director of CCAL development and the CCAL STAR Tournament. “Like natural reefs and oil platforms, artificial reefs attract varieties of life that create healthy food chains.

“We’re constantly building reefs and other conservation projects here in Louisiana, as well as tackling fisheries-management issues that affect Louisiana and the Gulf Coast,” said Trascher. “All our tournaments, banquets and other events feed our mission to protect and preserve our marine resources. And Mercury outboards have been a huge part of that help for over 30 years.”

Mercury Marine’s sponsorship of the annual CCAL STAR family fishing tournament includes outboard engines for tournament winners. The 2022 CCAL STAR Tournament started in May and ended Sept. 5. The first oil rig in the Gulf of Mexico was built in 1938. Trascher said those rigs rarely function for more than 50 years, and as many as 1,000 defunct platforms are removed annually, creating a never-ending need to construct new artificial reefs.

“The Coastal Conservation Association (parent association of CCAL) builds artificial reefs when there’s an absence of good fishing and habitat – not only absence of fish, but also the habitats that help fish survive. Companies must remove unused platforms and return the state of the (seabed) to its previous state – basically, back to bare sand,” according to the CCA’s website.

CCAL’s current primary purpose is to raise funds to finance new artificial reefs, construct those reefs and share relevant information with the public.

The Louisiana Artificial Reef Development Council was created in 1986 to provide guidance to the Louisiana Department of Wildlife and Fisheries concerning the artificial reef program.

“We asked the Artificial Reef Council for the locations of every potential artificial inshore reef, and there are currently 903 approved viable sites,” said Trascher. He added that CCAL has completed four new artificial reefs in 2022 and intends to construct three or four additional reefs by the end of the year.

CCAL’s goal, he said, is to build six to 12 artificial reefs each year.

“The only thing holding us up is money and materials,” Trascher said. “Fortunately, we’re able to use ‘materials of opportunity,’ such as old concrete from contractors or materials headed for a landfill.”

CCAL’s next artificial-reef project is the former site of South Timbalier 165, an iconic platform that anglers fished heavily before it was removed. The skeleton of an old ship will serve as the foundation of a new artificial reef that will rise 30 feet from the ocean floor.

Who Funds the CCA and CCAL?

“CCAL is not government-affiliated,” said Trascher. “It’s a ‘conservation first’ group, with the belief that what’s best for fish will usually be best for anglers, though that doesn’t necessarily align with every situation.”

“We’re part of the national CCA organization, but every state has its own office and projects – all funds raised in Louisiana stay here. All CCA states have the same bylaws, and we all answer to a national board, but it was the founding members’ vision that all states have the ability to address their own issues and concerns. The plan was to allow each state to do what it sees as best for its region.”

The stated purpose of the Coastal Conservation Association is to “conserve, promote and enhance the present and future availability of coastal resources for the benefit and enjoyment of the general public.” Nineteen state chapters spanning the Gulf of Mexico, the Atlantic Seaboard and the Pacific Coast comprise today’s CCA, which dates to 1977 when 14 recreational anglers met in response to commercial overfishing along the Texas coast that decimated redfish and speckled trout populations. Those angler activists formed the Gulf Coast Conservation Association (GCCA), and their successful “Save the Redfish” campaign captured the attention of anglers across the Gulf.

The GCCA grew rapidly and became the Coastal Conservation Association, and the organization continues to grow.

Fish on the Eastern Seaboard, the West Coast and the Gulf Coast can vary, but the challenges they face are often the same – destructive commercial gear, degraded habitat and misguided management concepts, according to the CCA.

Conservation Begins with Volunteers and Donations

“We budget to make nothing from STAR,” said Trascher. “The tournament is all about bringing volunteers into the fold who are so important in accomplishing our projects.

“STAR is CCAL’s largest membership drive and is by far the most visible part of our business. Mercury has been an important sponsor since STAR was created, and the engines provided by Mercury attract more anglers to CCA Louisiana and its projects than perhaps any other entity.

Trascher said volunteers are “absolutely critical to the success of every project of CCA Louisiana.”

“We have 25,000 CCAL members in Louisiana and a board of unpaid volunteers. Our volunteers do everything from loading equipment and trailers to organizing projects.”

“Louisiana is an incredibly philanthropic state, even though we have a very small population (4.6 million) compared to some states (Texas has about 30 million) and a relatively small economy. But we are very outdoorsy – and that’s what makes this state work so well. I don’t know many places where virtually everyone owns at least one boat. Where I am, our average member owns 2.4 boats per household.

“CCA is built on four pillars – conservation, advocacy, outreach and fundraising – and we can’t accomplish the first three without fundraising. All four aspects are important, and, at the end of the day, they all flow together.”

When zebra mussels were spotted in a lake just a mile away from his South Dakota home in 2020, Mercury Pro Team member Dave Charron sprang into action. As an angler and retired marine dealership owner, he knew if this ...

Coral reefs form some of the largest and most important ecosystems on Earth. According to the U.S. National Oceanic and Atmospheric Administration® (NOAA), about 25 percent of ocean fish depend on healthy coral reefs to survive. Because they are home ...

Balloons at a birthday party are super fun, especially the helium-filled Mylar kind. You can see them every weekend in countless backyards, city parks and neighborhood swimming pools proclaiming, “I’m 5!” or “Over the Hill …” and the images are ...

Research, Education and Conservation at the “Shark Lab”

Often depicted in movies and TV shows as ruthless, razor-toothed monsters, sharks long have been feared by humans. But thanks to the scientific research efforts undertaken by facilities like the Bimini Biological Field Station, nicknamed “Shark Lab,” in the Bahamas, ...

Making a Difference, One Fish at a Time

As the saying goes, “Everything is bigger in Texas,” and that includes its saltwater fishery. “We have the best fishing in the world, in my opinion. Texas is known for its abundance of speckled trout, redﬁsh, snook and ﬂounder,” said ...