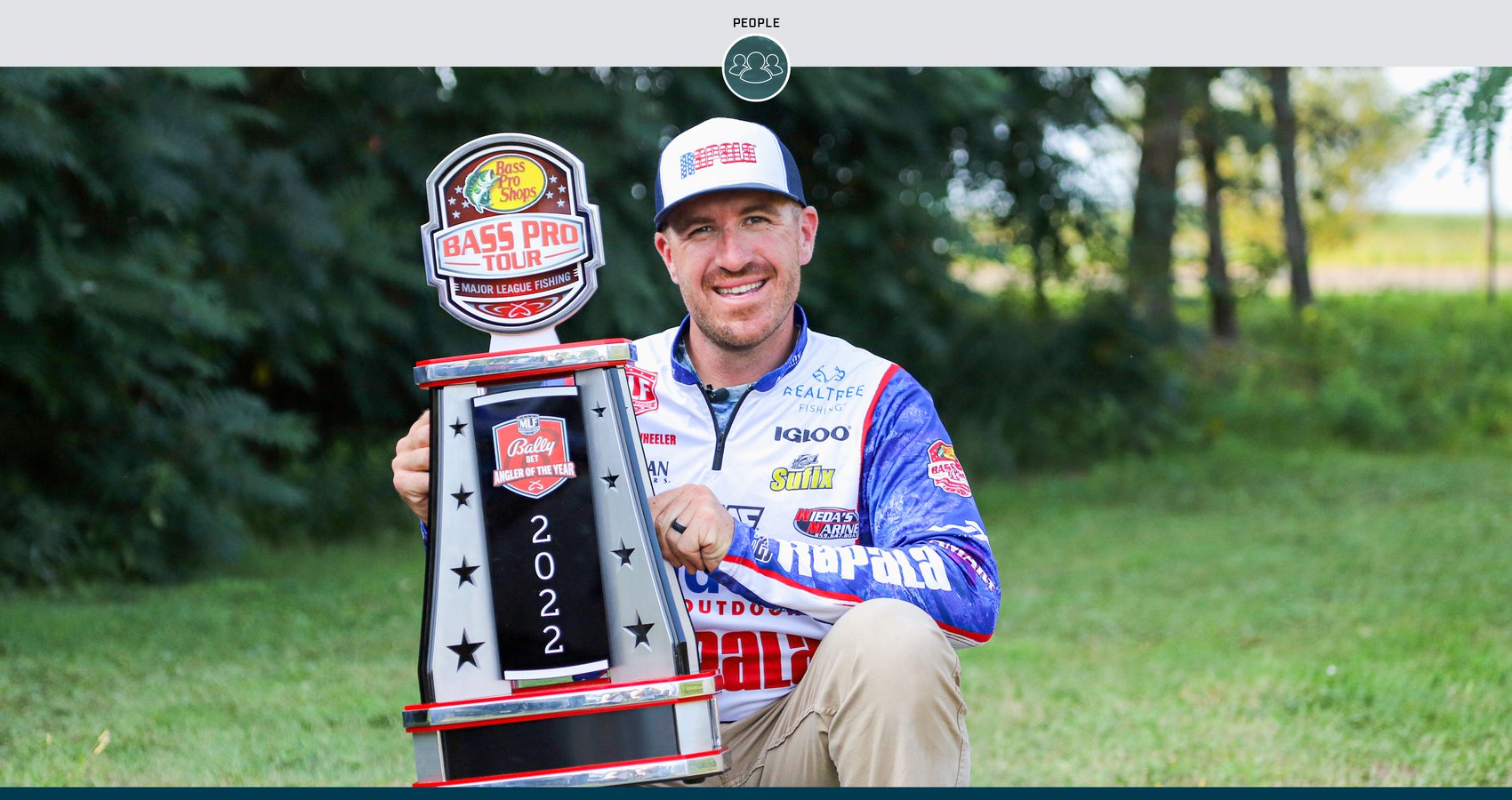 Mercury Pro Team member Jacob Wheeler is the 2022 Major League Fishing (MLF) Bass Pro Tour Angler of the Year (AOY). After a remarkable season in which he finished no lower than 11th over seven events, he claimed the title for the second year in a row.

By way of Indiana, the Harrison, Tennessee, pro just celebrated his 32nd birthday and is widely considered the current best bass angler in the world. He has always been a home run hitter, with multiple top-level wins to his credit, and now has two of the sport’s most difficult-to-achieve titles on his resume.

“Angler of the Year is always your goal to start a new year,” Wheeler said. “It’s special and so hard to do; it’s an honor and one of the highlights of my career.”

A Pattern of Consistency

Finishing high in the year-end points race is not a new trend for Wheeler, and he’s shown remarkable consistency over the years, regardless of the organization he was fishing with at the time.

Wheeler began his professional career on the FLW Tour and finished as high as fourth in the AOY race in 2016 before switching to the Bassmaster Elite Series, where he finished third and ninth in his two seasons on that professional bass fishing trail.

In 2019, he moved to the MLF Bass Pro Tour, a series that offers a unique twist on the standard tournament protocol, swapping the traditional five-fish limit for its every-fish-counts format.

Wheeler made the transition in stride and has become even more dominant, finishing fourth and third in the first two seasons and now, back-to-back Angler of the Year titles. Wheeler attributes his success mainly to his strategy to become a more consistent angler.

“I’ve worked hard to become more consistent,” he said. “That has been the priority for me the last two years, and I have practiced harder and tried to become a more versatile angler who can catch them with any technique. I believe doing this helps to minimize bad events.”

His lowest finish this year was at the final event on Minnesota’s Mille Lacs Lake, where he landed in 11th.

“Your best finish doesn’t matter as much as your worst finish,” Wheeler added. “Having a bad tournament will ruin your chances in a hurry. You can’t slip with these guys, and being consistent all year long with solid finishes is what wins AOY titles.”

Now a repeat AOY winner, he’s in elite company in professional bass fishing lore, but the humble pro knows all that talk is premature at this point in his career.

“To look at what guys like Kevin VanDam (7 Bassmaster and 1 FLW AOY titles), Roland Martin (9 Bassmaster AOY titles) and others have done is just insane,” Wheeler said. “I’m super happy with two and hope one day the opportunity comes up where I win another. That’s what I hope for, just to be in a position to win more of them in my career.”

A Season of Watching His Back

Even with a tremendous start to the season, where he finished seventh, third and eighth to begin the year, Wheeler did not take over the points lead until the fourth event. Eventual second-place finisher Jordan Lee matched or bested Wheeler’s excellent finishes at each stop early on.

“He had a phenomenal season and is an excellent angler that wins so many events, so I knew I couldn’t let up for a minute,” Wheeler said of Lee. “When I had a good event, he caught them too. It was kind of like a shot across the bow every time. I knew it was going to be a battle to the end.”

But Wheeler continued his hot streak and eventually pulled away. Going into the season’s last event, Wheeler held a 65-point lead over Lee, each of them widely considered to be key figures in the sport and among the next generation of superstars.

With 80 anglers fishing the tour, the maximum points awarded in an event is 80. With a massive lead, Wheeler had all but sewed up the title going into the finale but never once felt safe.

“I had writers calling me before the event to try to get a jump on their AOY stories, and I told them that’s a horrible idea,” he said with a laugh. “I’m never one to count my chickens before they hatch; these guys are too good. It’s fishing, and I know anything can happen on the water, and I didn’t let up at all.”

The Reliability of Mercury

Wheeler runs a Triton 21 XrT bass boat with a Mercury 4.6L V8 250hp Pro XS® outboard, his second full season running a Mercury outboard and also his second time as the angler holding the AOY trophy when the points were tabulated after the season finale.

“Both years, I’ve been fortunate to win it while running a Mercury, and I don’t think it’s a coincidence,” he said. “I have so many good things to say about the motor.”

Reliability is at the top of the list among the many things Wheeler appreciates about the Pro XS engine.

“There’s never a thought in my mind that I won’t be able to make it to my next spot,” he said. “One hiccup or mechanical failure along the way during a season could easily change the outcome of the points race. Every fish catch and every point you earn in a season is so important; even a small amount of lost fishing time could ruin your chances of winning Angler of the Year.”

In March, Wheeler will compete in REDCREST 2023, the Bass Pro Tour championship, in Charlotte, North Carolina. He hopes to take home the title, but the opportunity to win AOY for the third time is the primary goal for next season.

Wheeler already holds a championship title with his 2012 FLW Forrest Wood Cup triumph, where he also became the youngest to win that tournament at age 21. While he doesn’t downplay the significance of these victories, he views AOY awards differently at this stage of his fishing career.

“Winning a championship is a major accomplishment and a life-changing moment, but to me, that means you were the best angler for three days of fishing,” he said. “AOY takes consistency, day in and day out, over a full season on different bodies of water. That’s become my main goal and something I now strive for every season.”