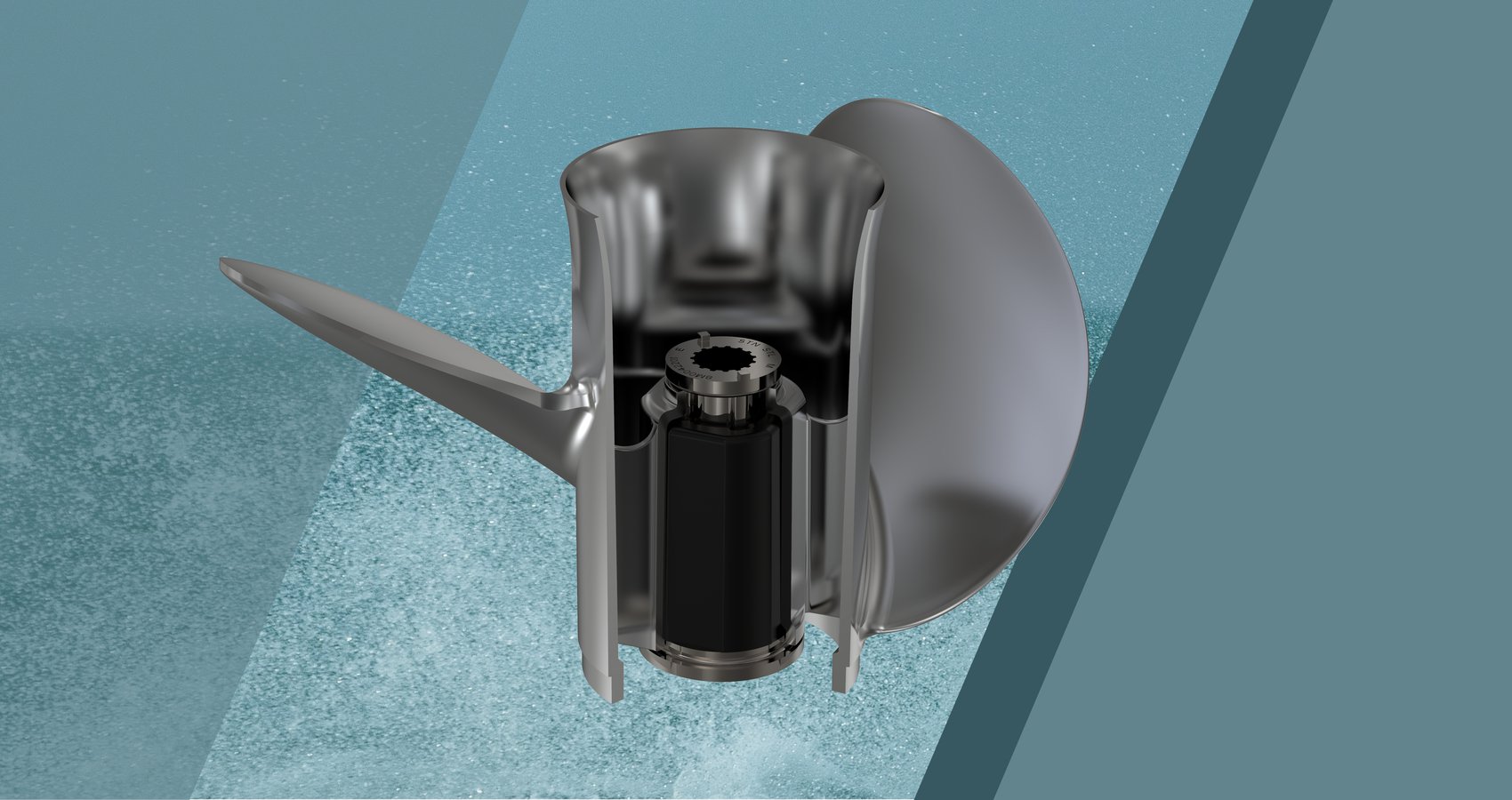 Over the last several decades, technology has changed boating for the better. It’s not only the “smart” technology, like digital controls and electronic fuel injection, that are improving the boating experience. The technology of materials science has also evolved, allowing Mercury® to engineer superior parts and products throughout the propulsion system.

A prime example is a simple-looking, yet vital part of your engine – the prop hub. The hub is a sleeve that slides inside the center of the prop and on to the prop shaft, and its innovations go far beyond creating a good fit. The hub helps transfer power from the drive train to the prop, while providing enough cushion to reduce shift clunk and, if needed, to be a sacrificial component should the prop impact a hard object. The “spun hub” that can result from an impact is an annoyance, but it’s a far less troublesome outcome than a bent prop shaft or worse. And the hub is easily replaceable, allowing boaters to swap out a damaged hub on the water or change props and hubs when trying to dial in optimal performance.

Those are the benefits of the modern Mercury prop hub. How Mercury got here is a bit longer story, and a tale of constantly striving for better all-around performance.

Prior to through-hub exhaust systems – and still today for some inboard props – propeller blades were integrated with a small central hub that installed directly on to the prop shaft. Early drive train protection came in the form of a simple “shear pin” or “drive pin” that passed through the prop hub and the prop shaft. The pin transferred the drive energy of the engine to turn the propeller, and because the pin was made of a slightly softer metal, it would literally “shear off” when sufficient force stopped the propeller.

As higher horsepower engines were developed, better solutions were needed to more efficiently and effectively get the engine’s power to the propeller and mitigate the upstream damage of striking an underwater object. In the 1940s and ’50s, some Mercury engines were built with a stacked clutch system, with fiber plates meshed with steel plates inside the gearcase to help transfer power.

Also in the 1950s came the first adoption of a shock-absorbing bushing between the propeller and the prop shaft. It featured a rubber sleeve tightly wound around a splined metal tube. The rubber sleeve was eventually vulcanized and attached to the splined tube through a heating process. Mercury worked closely with the LORD Manufacturing Company of Erie, Pennsylvania, and Goodyear® Tire & Rubber Company to introduce these early vulcanized rubber hubs, which became the industry standard by the 1960s and ’70s.

But here’s the rub: The hub was squeezed into the tube of the propeller under compression, and if the propeller struck an underwater object, the force broke loose the friction bond between the rubber sleeve and the propeller tube. Once that friction was lost, it could not be regained until a new rubber sleeve was installed – something boaters could not manage on their own, particularly on the water.

The rubber hub system experienced another evolutionary step when Mercury introduced the Jet Prop through-hub exhaust system on its 20hp outboard. To quiet the engine exhaust sound, the exhaust was channeled through the outboard midsection and gearcase then out through the propeller tube. Through thousands of hours of lab and on-water testing, new rubber compounds were developed to handle the extra torque and heat of the new system. Some of the propeller hubs stayed with a round cavity while others changed to a squared cavity with radiused corners, and the resulting technology withstood through the ’80s and into the ’90s.

Going Beyond the Rubber Hub

Despite the evolution of the vulcanized rubber hub, the dilemma for boaters who spun a hub on the water still existed: Because the rubber was bonded to the prop, repairing a damaged hub required a skilled technician.

In the early 1990s, Mercury solved the problem. The company introduced a new concept that has become the modern standard for propeller hub design on high-horsepower engines. The rubber hub was replaced by a two-piece hub kit. It was the first field-serviceable hub kit, and it was designed to fit into the lineup of premium – and highly regarded – propellers Mercury was already manufacturing.

The two pieces included a thin, inner splined drive and an outer “buffer” sleeve. The splined drive would always be brass. Designers experimented with several outer sleeve materials to find the right combination of hardness and shock-absorbing ability to handle both the initial shock when the gears of the drive were engaged and the change in torque associated with a drastic change in engine speed. Eventually, they determined the optimal material to be Delrin® from DuPont®.

Delrin is a high-performance acetal homopolymer created for high-load mechanical applications. It was developed to replace metal in some applications while delivering shock mitigation and impact and wear resistance.

Mercury worked with DuPont to select the ideal Delrin formula with the optimal blending of strength, durability and “lag” (forgiveness) to meet the high demands of boaters. This launched the Mercury Flo-Torq® II series of prop hubs.

The system was later adapted so boaters can use Mercury propellers and hubs on engines by other brands. The splined brass drive – known as the insert, or aft adapter – can be swapped and paired with any necessary thrust washer or aft adapter to provide the proper connection.

This allowed nearly all boaters to enjoy the convenience of an easily replaceable hub and the versatility to use one hub system inside propellers with different pitches to better tailor their boat’s performance to their on-water activity.

Mercury has continued to develop prop hub solutions to accommodate new engine designs and specific boater demands. Several generations of Flo-Torq hubs were created that included tougher hubs designed to handle the highest-horsepower, high-performance engines, and models designed to reduce shift clunk when using stainless steel props. There were, and still are, combinations of components configured to fit many engines and meet different boater needs.

Today, the Flo-Torq family has expanded to include the Flo-Torq SSR lineup, which features Soft-Shift Rubber technology. There’s an SSR hub to fit in the tube of most Mercury propellers for use on engines from 40 to 225hp. There’s also an SSR for the more demanding surface-piercing applications and for higher-horsepower engines up to 400 ponies with a 1-inch prop shaft. Plus, there’s an HD model to fit a 1 1/4-inch prop shaft.

The design and compounds of the SSR hubs deliver a 22-23% decrease in shift noise, or clunk, along with significantly attenuating vibration.

The Flo-Torq II hub is still a popular hub kit for most Mercury propellers that can accept the system. The Flo-Torq II is also still the hub of choice for the remaining universe of two-stroke outboards on the water, while Flo-Torq SSR is now the recommended hub system for Mercury FourStroke outboards.

And that, ultimately, is why the history of the Mercury prop hub is a story of success. Through tireless trials and constant innovation, Mercury has been able to deliver a product to improve the boating experience for just about any marine engine, any boater and any on-water activity.