“Love in Adventure” couple Missy and Kyle Lukey complete the first leg of their life-changing voyage.

In the second installment of "Love in Adventure," we check in with Missy and Kyle Lukey as they continue their journey from Sheboygan, Wisconsin, to the British Virgin Islands. To get caught up on the first installment of their story, please click HERE. You may also follow their travels on Instagram and YouTube.

“I can still hear Kyle’s Grandpa’s jovial voice as he uttered his signature parting farewell, ‘Bye for now,’ as we were saying goodbye to family and friends at the start of our trip last September,” Missy Lukey recalls. “It is a cadence that replayed in my head as we slowly but deliberately made our way through the Great Lakes and out through the Erie Canal to the Atlantic. Each giant farewell hug we got at the dock back in Sheboygan brought a crazy flood of emotions. Each goodbye was a reminder of just how many incredible individuals we had supporting us, cheering us on.” 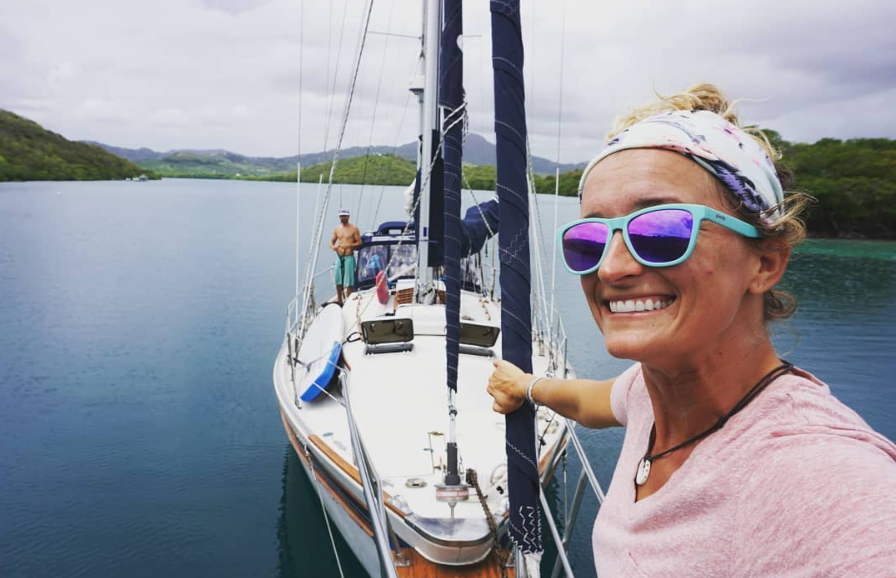 By setting off on their voyage from Sheboygan, Wisconsin, to the Caribbean ‒ just the two of them alone against the elements ‒ Missy and Kyle would test not only their 40-foot sailboat, but also themselves. “This is it. I genuinely do not know where the future will bring us,” Missy remembers thinking. “I am grateful, I am anxiously overwhelmed, I am so ridiculously excited to see what tomorrow has in store.”

Both Missy and Kyle grew up around the water. “As soon as I learned to walk, I was being towed behind a boat on skis. Boating is second nature,” she says, but adds, “Sailing, on the other hand, has been an endeavor we have only taken up in the last few years ‒ a process we are still learning as we go. Each sail has been a whole new experience with all-new skills to master.”

The couple spent the autumn cruising through the Great Lakes: Michigan ‒ Huron ‒ Lake St Clair ‒ Erie. Instead of tying up in marinas, however, they spent most nights on the hook under the stars in a secluded bay or cove. “In the Great Lakes, we primarily anchored; it’s free!” she says. 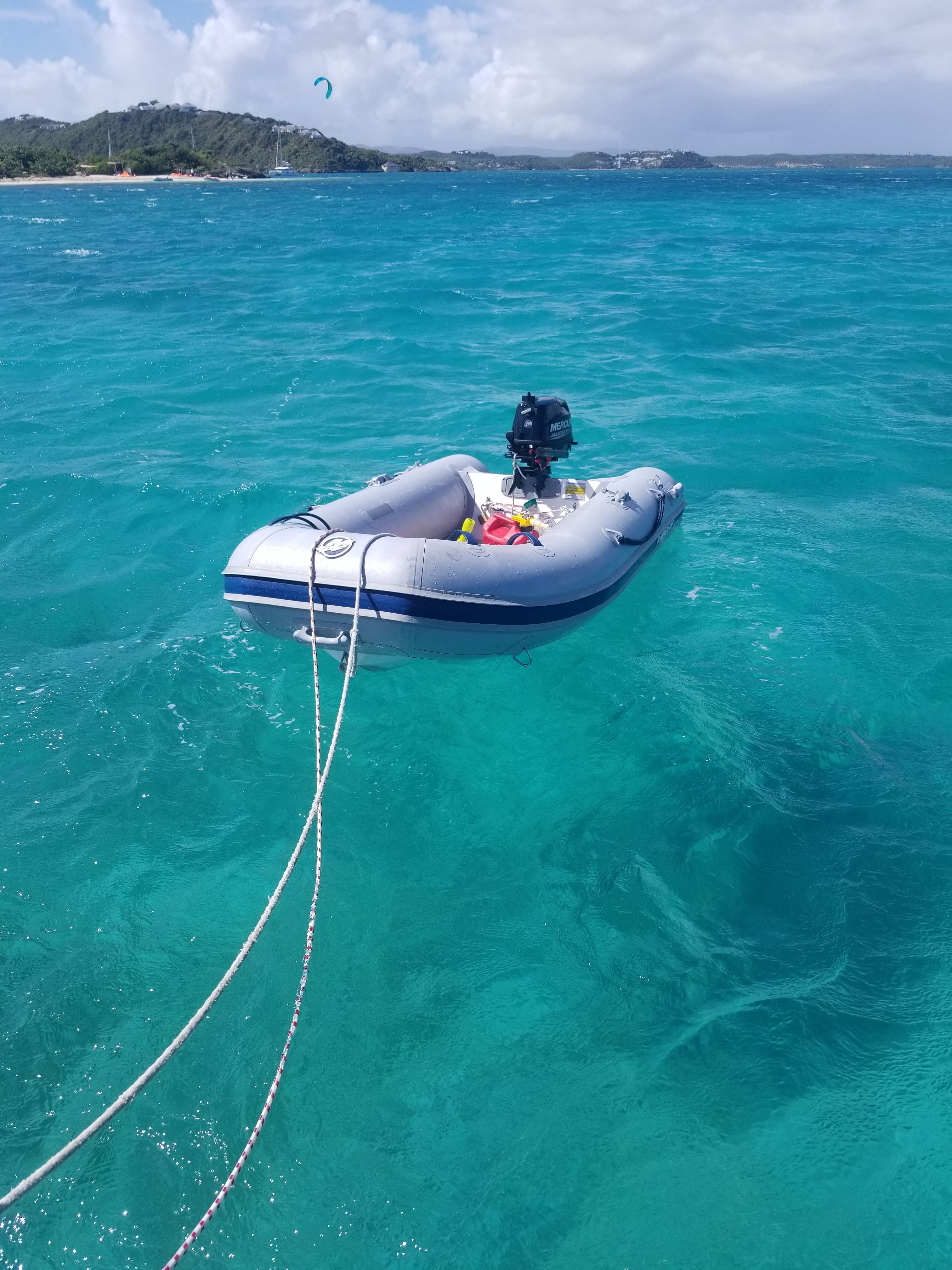 Without shore power, however, it was essential for them to be self-sufficient. That’s where the solar panels they had installed on Macushla’s deck came in. “We have 400 watts of solar panels on board distributed between three panels with three separate solar controllers,” she explains. “On an average sunny day, that yields approximately 130 amp hours of energy.  We use about 100 amp hours of energy daily, which keeps us just slightly ahead of the energy curve.”

Anchoring out also meant the couple had to rely on Macushla’s dinghy to get back and forth to shore to buy food and supplies. It is an 8'10" Mercury 280 RIB (rigid inflatable boat) with gray Hypalon tubes, powered by a 6-hp Mercury FourStroke outboard engine. “It’s the only way to get to land ‒ the sailboat’s ‘station wagon,’” Missy says. “This lifestyle would be impossible without one. We are often anchored a ways from shore or any sort of provisions. The ability to get to land is critical to survival.”

Using the boat’s chart plotter and the Navionics app on their iPad to navigate, Missy and Kyle reached the entrance to the Erie Canal in Buffalo, N.Y. There, they had to drop Macushla’s masts to the deck in order to get under the various bridges along the next part of their route.

“The canal was really amazing because the towns all offer free tie-up,” Missy says. “Most of them offered all the amenities at no cost, or requested a small donation. It was a really great experience; we found incredible hospitality, great little towns, a little piece of history.” 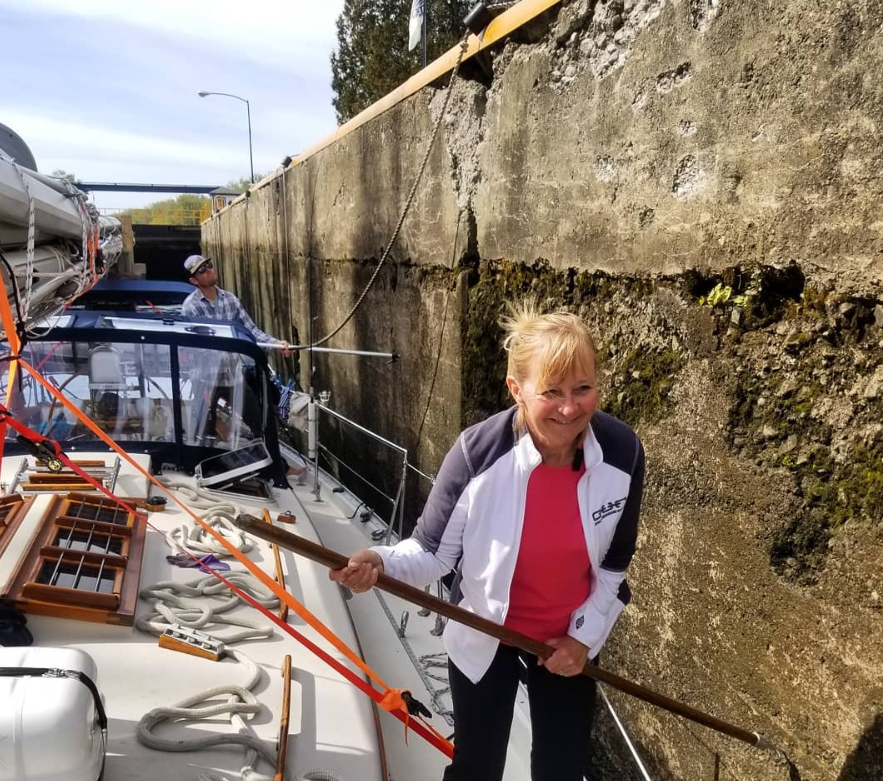 Missy’s mother came aboard for part of the Erie Canal leg. “Between reading pages of her book, we put her to work tying fenders and grabbing lines,” Missy says. “We constantly rushed from bow to stern with a boat stick in hand fending of the slick slimy lock walls as we slowly descended through 35 locks over the course of nine days.”

Missy and Kyle also enjoyed meeting new people along their route, “…fellow sailors with all sorts of inspiring stories,” she says. “A quickly formed bond and suddenly you cannot remember a time they weren’t a part of your life. You say goodbye with confidence that your paths will cross again soon.”

In particular, they enjoyed meeting Nate and Kate on their boat Grace, a couple of self-described “30-somethings” who post videos to their YouTube channel “Stray Dog Sailing” as they cruise. “We met them in Erie, Pennsylvania, and stuck together through the canal and out to Sandy Hook,” Missy says.

Running past New York City on the Hudson River was one of the most memorable parts of the trip for Missy. She recalls, “seeing the skyline from the sea. The towering city on one side, Lady Liberty on the other. So many people passing through this exact little gap. So many dreams being chased. So many stories to tell. The comfort of the Great Lakes behind us. The dream of the great Atlantic sea ahead.” 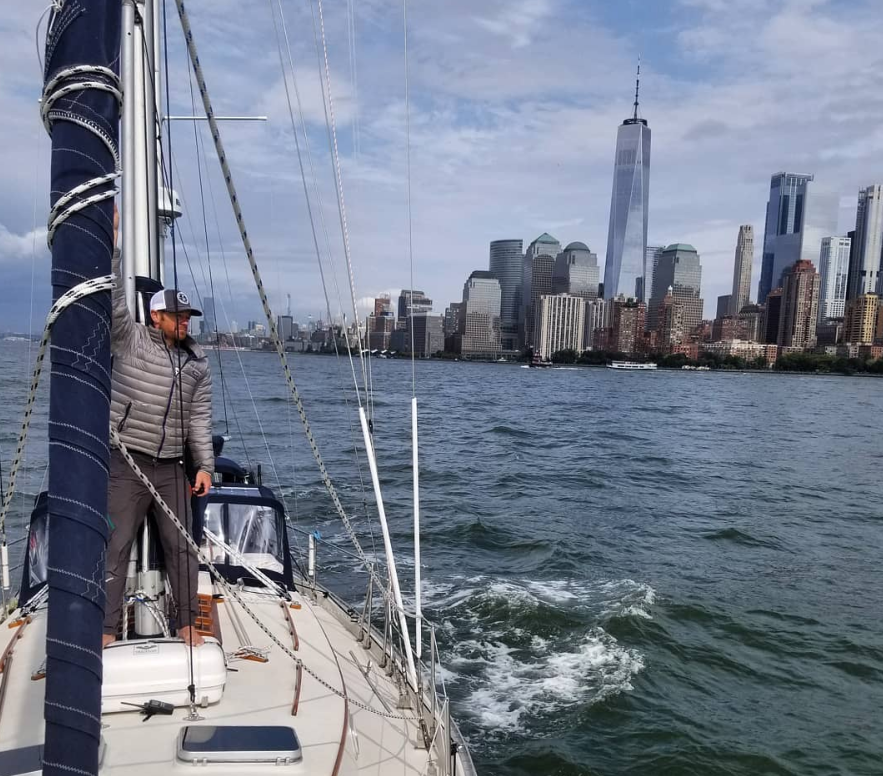 The couple got their first taste of sailing in the Atlantic as they cruised out of New York Harbor around the coast of New Jersey to Delaware Bay. Returning to the protected waters of the ICW (Intracoastal Waterway), they headed south, joined by Kyle’s father for a few days. “Sailing when we can. Navigating through some of the narrowest cuts in land we have ever taken Macushla,” Missy says. “Navigating and spotting for shallow spots as we poke our way into some pretty wild and equally as serene anchorages….”

The first time Missy set foot on a sailboat, she wound up clinging to the rail, desperately seasick. She says that never in her wildest dreams did she think she would end up living aboard one. But in the years since she met Kyle and they bought and refurbished Macushla, “Sailing has gone from an activity I apprehensively partook in, to a challenge I look forward to. It’s an amazing way to explore; to see places you have never seen, and to see places you know so well in a whole new light,” she says. “It was the dream of exploring new destinations that lured us in. It was the wild, beautiful, crazy, scary, serene moments that keep us hanging on; seeing what the wind and seas have in store for us as we embark on this new adventure.”

Beaufort, North Carolina, was the couple’s final stop on the ICW before finally heading out into the open ocean for the next leg of what Missy terms, “a wild and crazy undertaking….a multi-week run with hopes to make landfall somewhere in the Caribbean. A 1,400-plus mile journey we have planned and prepared for the last two years. A journey that intrigues and equally scares the living daylights out of me. A journey I know will be so very hard, yet so very rewarding. A journey I know we will be telling stories of for the rest of our lives.

In the third installment of "Love in Adventure," we check in with Missy and Kyle Lukey as they continue their journey from Sheboygan, Wisconsin, to the British Virgin Islands. To get caught up on the first installment of their story, ...