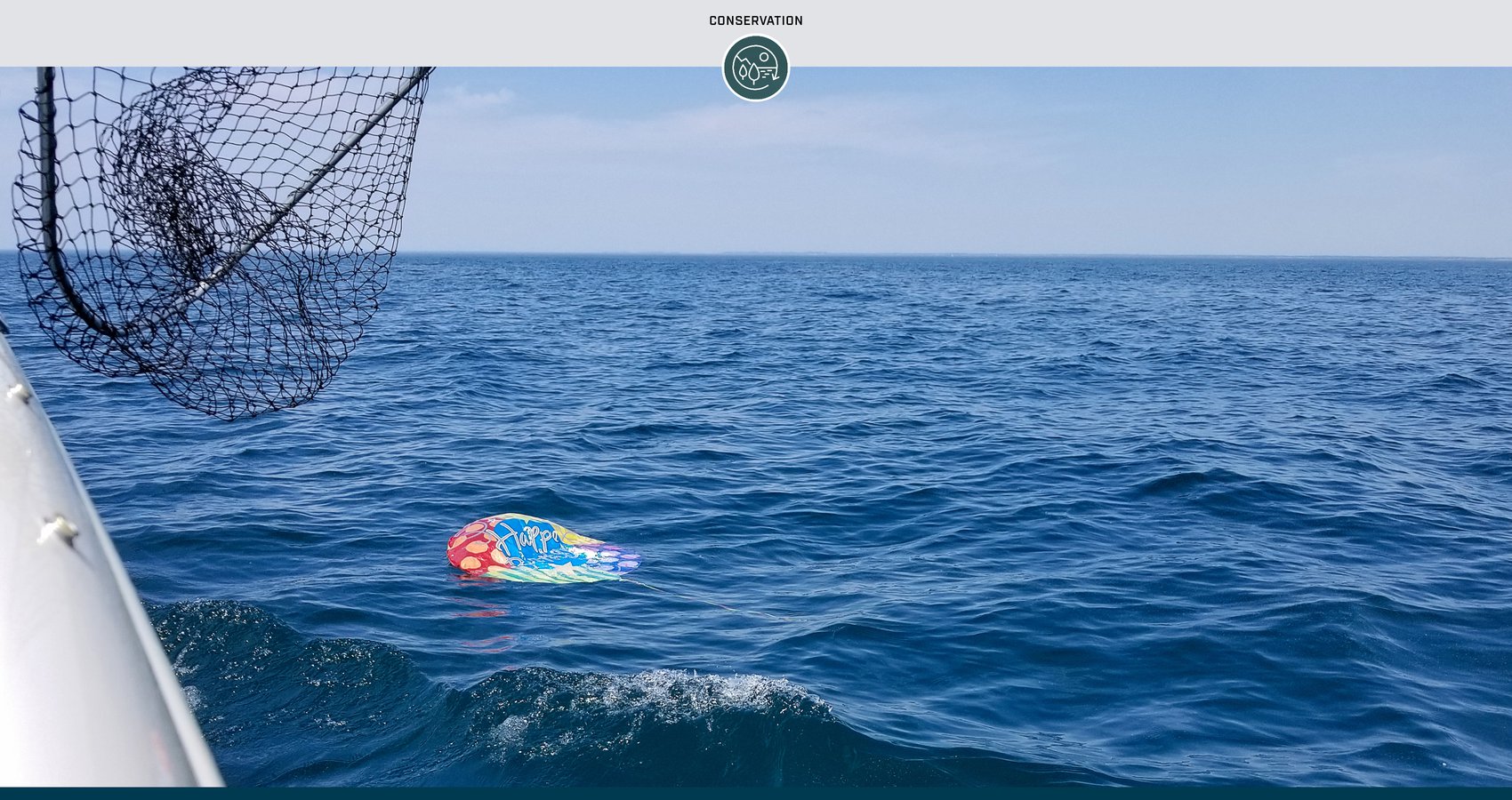 Balloons at a birthday party are super fun, especially the helium-filled Mylar kind. You can see them every weekend in countless backyards, city parks and neighborhood swimming pools proclaiming, “I’m 5!” or “Over the Hill …” and the images are undoubtedly celebratory and congenial.

But after the cake is gone and real-life routines resume, those same balloons are a lot less fun. They’re actually pretty awful, in fact. Because not only will Mylar – and other similar plastic sheeting products used to make long-lasting balloons – take decades to break down even when properly disposed of, but also because balloons are often inadvertently released into the air during or after the party. After a time, these once-festive decorations fall back to earth and become environmental hazards. Many end up in our lakes, rivers and oceans where they have been known to float for months or years, often trailing ribbons or string behind them.

Nowhere is the problem more evident than in our nearshore and offshore waters, where they can get tangled up or even consumed by marine animals who mistake the debris for a food source. Fortunately, the people who work or spend their free time on the water have taken notice. More importantly, some of them are really doing something about it in the form of awareness and cleanup efforts such as the DEEP Balloon Challenge.

Rhode Island-based DEEP Apparel is a clothing line designed for the outdoor enthusiast. Its clothes are stylish, durable and functional, and the brand has carved out a nice niche in the market since its humble beginnings in 2010. But founders Mike Croteau and Matt Smalley are more than just entrepreneurs. They’re passionate anglers and outdoorsmen with an unwavering commitment to caring for the environment that plays host to their and their customers’ passion for fishing and other outdoors activities. The short version of how they started their campaign is that they simply got tired of seeing balloons floating around every time they hit the water.

According to Smalley, the initial awareness of this problem was brought to the forefront by late Rhode Island lobster boat operator, Capt. Norbert Stamps. His legacy is one of protecting the environment while advocating for properly regulated fisheries along the east coast. He brought political awareness to this issue and saw the balloon epidemic as the single biggest pollution issue in the Northeast.

“DEEP Apparel stood on the shoulders of Norbert’s movement,” Smalley said. “It just kind of came to me one day when we were out. It typically happens more in the spring where we are in the Northeast, probably because of graduations and things like that, and that’s also when I start spending more time on the water. Anyway, you go 5 to 100 miles offshore and it’s remarkable how many Mylar balloons you pass.

“As I spent more time on the water and retrieved more and more balloons, I realized that we could create a unique way to get more people on board with doing the right thing, and also incentivize them for it.”

And thus the DEEP Balloon Challenge was born. The task and rules are simple: Every time you see a balloon on the water, stop and pick it up. Then take a photo of yourself with the balloon and post it to Instagram with the hashtag #deepballoonchallenge. Whoever recovers and properly documents the most balloons in a calendar year wins the grand prize, a premium gift package with apparel and goodies from DEEP and other brands that have signed on to support the cause.

“We’d love to think that everybody would just do this organically,” Smalley said. "But we’re realistic, and rewarding people for doing good deeds will definitely encourage the right behavior. This is just us trying to do the right thing and recognizing that there are a lot of people out there who would be a part of the eco movement if we could just get them engaged.

“Luckily, we had the follow through from our social media following, and we made it easy for them to share their posts, and for us to share them from those platforms. We ended up unable to keep up with the notifications coming through social media, and we still can’t. That tells me there’s something there and we’re very happy to keep it going.”

DEEP has more than 41,000 followers on Instagram alone. 2021 marked the first year of the challenge and because two individuals have stood out from the rest of the field, we’ve awarded two sets of grand prizes. Capt. Damon Burden of Pythias Sportfishing, South Yarmouth, Massachusetts, and Capt. Chris Spies of Holbrook, New York, brought in hundreds of balloons between them, and were each rewarded with a prize package worth more than $2,000, which included DEEP gear, Costa Del Mar sunglasses, and goodies from Guy Cotton, Grizzly Coolers, ChatterLures and Gibbs Lures.

Elena and Bobby Rice of Truro, Massachusetts, are co-owners of Reel Deal Fishing Charters, founded over two decades ago and operates some 500 charters a year. Both are licensed captains and members of the Mercury Pro Team, and everyone in their organization has become an avid participant in the DEEP Balloon Challenge. While some people who aren’t very familiar with the industry might be under the impression that charter boat operators and commercial fishing crews don’t really care about the environment, Elena Rice is quick to set the record straight.

“I feel like there’s a stereotype out there that’s inaccurate because we (people who make their living on the water) care very much about the ocean, to the point that we’re concerned about microplastics,” she said. “We’ve been to the Marathon (Florida) Turtle Hospital and we’ve seen what they are taking out of the stomachs of turtles. It’s a big problem.”

Many of the sea turtles that are rescued and rehabilitated by The Turtle Hospital have ingested plastic items such as balloons – mistaking it for food – which they are unable to break down or pass, according to the organization’s website. If left untreated, turtles with such intestinal blockages often die of starvation.

“Aside from us gathering balloons and just trash in general, we’ve stopped buying disposable water bottles and soda,” Rice continued. “And our captains have gotten a lot more on top of making sure customers don’t let things blow off the boat, just small changes like that.”

“The ocean isn’t forever if you don’t take care of it.”

DEEP’s Mike Croteau said his company is also fighting the battle on several other fronts, and isn’t afraid to ruffle some feathers with its business partners or change the way merchandise is packaged for shipment and sale if it means reducing waste and the potential for pollution.

“I saw how much plastic we were putting out every year,” Croteau said. “It was required by our wholesalers that every single shirt had to be individually wrapped, and we realized we were putting out tens of thousands of little plastic bags that were just going to end up in landfills.

“So we literally just stopped using them. So now with every online order from DEEP you get a hand-written note that thanks you for your support in helping us eliminate single-use plastic so the customer understands why the merchandise isn’t in a bag. And we just let our wholesalers know that this is our new practice. Like it or not, we’re not going to use plastics whenever possible. Luckily there hasn’t been any pushback.”

DEEP is also exploring making clothing out of recycled plastics as well as non-traditional, organic materials such as coconut husks.

Mercury Pro Team member and noted television host Carter Andrews is also extremely passionate about taking care of our oceans. He has recruited a multitude of other boaters and anglers to do their part via his One Piece a Day campaign, which encourages every single person to pick up at least one piece of trash each time they are out on the water. He agrees that Mylar balloons are a huge problem that needs to be addressed.

“I can tell you that I’ve pulled thousands of balloons out of the water over the years with One Piece a Day, so I’m glad to know that (DEEP) is doing this,” he said. “People simply do not understand the process of what really happens when they open their hand and let those balloons go. All of a sudden, it’s out of sight, out of mind. They think it’s like releasing doves up into the sky. Well, Mylar balloons and doves aren’t the same thing. Those balloons go up and they’ve got to come down somewhere, and unfortunately, because of our prevailing winds, a lot of what’s released ends up in our oceans. It’s no different than throwing garbage out of your car window.

“Out of everything I see collected from One Piece a Day, I would say Mylar balloons make up at least half of it.”

The 2022 DEEP Balloon Challenge will continue through the end of the year, and the winner will be announced shortly after. The 2023 contest will start on January 1, 2023, and available prizes will be announced at that time. However, Croteau urges everyone to participate whether they think they have a shot at winning a prize or not.

“When you pull a balloon out of the water and post a photo, you’re not just helping clean up your waterways, you’re encouraging others to do the same,” he said. “And the more we build awareness of the problem of Mylar balloons in our oceans, lakes and rivers, the better chance we have of changing the behavior of people who are unknowingly releasing balloons without regard for where they end up.”

To get involved in the DEEP Balloon Challenge, simply start picking up balloons when you’re out on the water, then post a photo of it to Instagram using the hashtag #deepballoonchallenge. You can also tag each photo with #onepieceaday to multiply the awareness via Carter Andrews’s 40,000 Instagram followers.