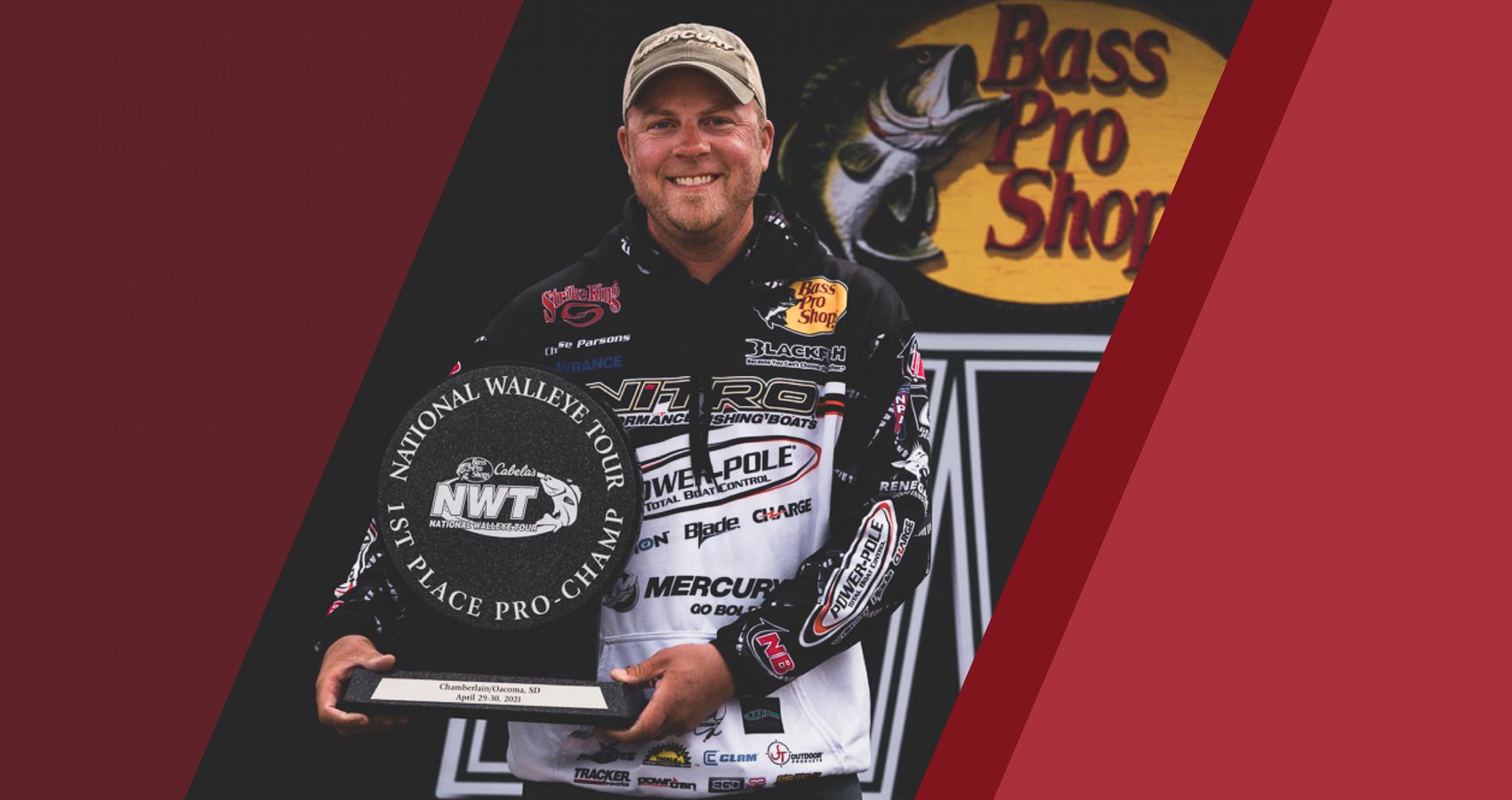 Mercury Pro Team member Chase Parsons says there’s just something about the Missouri River system – particularly in South Dakota – that he likes. And it’s pretty easy to see why.

In 2011, Parsons, of Denmark, Wisconsin, earned his first professional fishing win at the FLW Walleye Tour event held on South Dakota’s Lake Oahe – a Missouri River reservoir. That win was historic for the fishing technique that Parsons and the rest of the crew from “The Next Bite” TV show revealed to the walleye world. He caught his winning fish trolling the style of wire spinnerbait traditionally used for bass fishing. 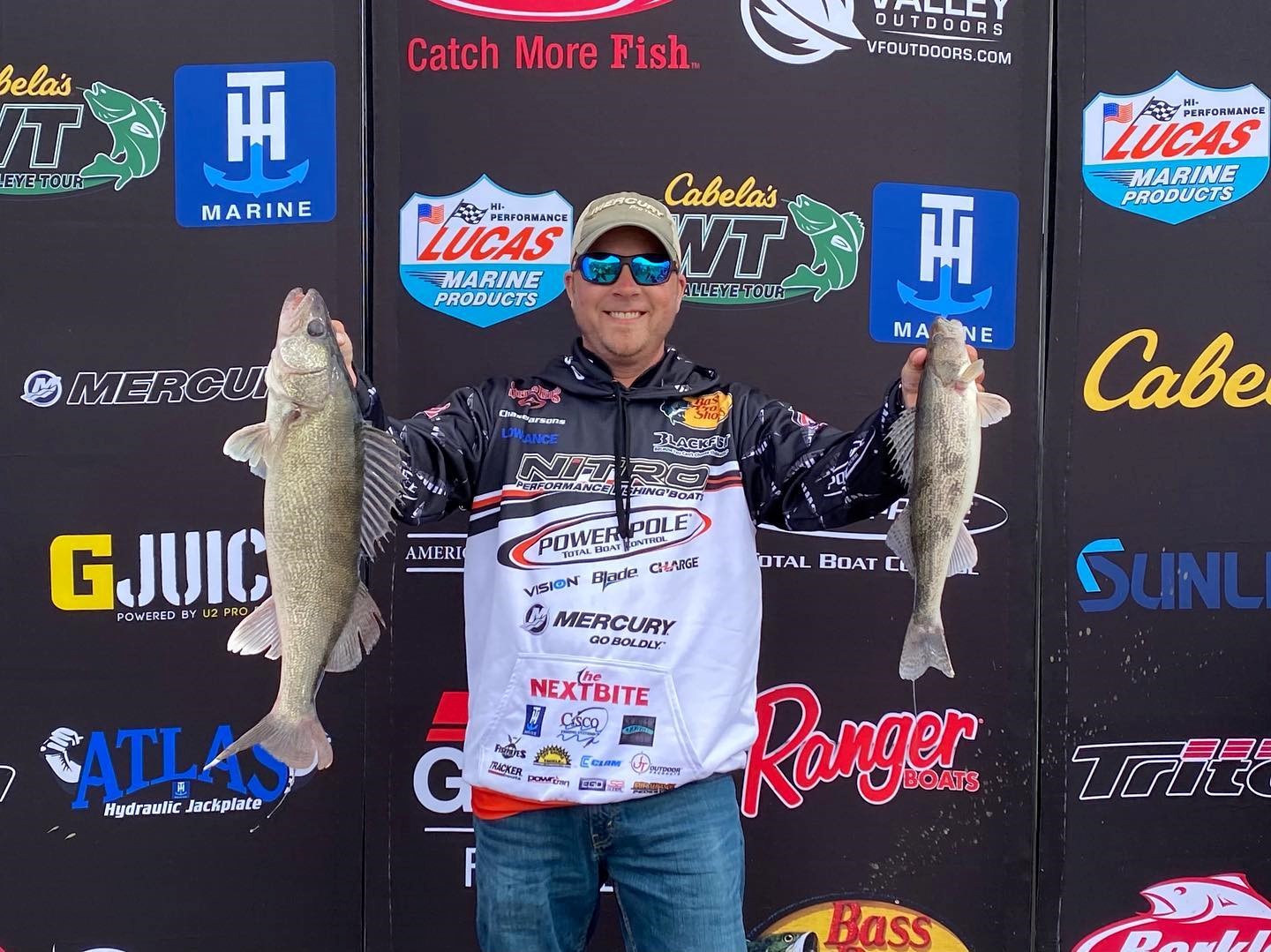 This time, Parson took nearly the opposite approach to catch his fish, yet he achieved the same result.

After a mediocre pre-fish period before the tournament, Parsons and fellow Next Bite host Tommy Kemos decided to do something rare on the second-to-last day of practice: They fished together. With time dwindling, they wanted to be thorough as they searched for a specific pattern.

“We basically just started looking for a shallow pitching bite,” said Parsons. “With side scan (side-viewing sonar), we could see some packs of fish. We’re pretty confident in our pitching abilities, and most of the time when we’re pitching, we’re artificial (lure) guys. Tom threw an artificial, and I threw a fathead (minnow). Almost immediately I got a bite with the fathead. And then in the next 20 minutes, we caught five big ones on fatheads. All we did from then on was try and find similar spots.”

Parsons and Kemos, who eventually finished runner-up, targeted walleyes in an area just south of Snake Creek, about 65 miles south of the takeoff site at Arrowwood Resort.

“We were targeting the backs of creeks,” Parsons said. “I’m talking the ‘back-back’, where it comes up and it’s just sand. In practice, we caught some prespawners, and during the tournament we caught some postspawners. I assume that they were going back there to spawn. The water was dirty, but you could see the fish plain as day on side scan. Some of the bays had catfish, pike and smallies, and some of the bays had mainly walleyes. They were just sitting way back in the warmer water in 2 to 8 feet. It’s fitting we took first and second because we figured it out together. We sort of did the opposite of everyone else, and it worked.”

This pattern didn’t produce numbers of fish. Parsons knew other competitors were catching more than 60 walleyes a day fishing other techniques. Yet, during each of the two tournament days, Parsons had only three walleyes in his livewell at noon.

The program worked largely because Parsons didn’t have to get gas to get back from Snake Creek and was therefore able to maximize his fishing time. His 20-foot Nitro ZV20 boat holds 65 gallons of fuel, and his Mercury 4.6L V8 300hp Pro XS outboard is easy enough on fuel that Parsons pulled off the 130-mile round trip with about 15 gallons to spare.

“I would give the rod only small whiffs, not popping them,” he said. “(The fish) were super lethargic. On only about 20 percent of the bites did you actually feel the ‘tick.’ I think they were just chilling back there. They would just mouth it a lot of times.”

Though Parsons admits that his pattern was starting to “go away” during the tournament, it was certainly consistent enough. He put together back-to-back limits of more than 15 pounds and was the only pro to do so. After opening the tournament in fifth place on day one, his consistent performance on day two allowed Parsons to overtake the pack when the bite slacked off for most of his competitors. He wound up with a two-day total of 31.7 pounds, which earned him a Ranger 2080MS boat with a Mercury 250hp outboard, a $15,000 prize plus contingency bonuses that pushed the value of his total prize package to more than $91,000.

Reflecting on his latest win, Parsons admits that he feels a special connection to the legendary fisheries of the northern plains.

“This entire Missouri River system is special to me and to my dad (Mercury Pro Team member Gary Parsons),” Chase said. “The style of fishing just fits my eye. You have to move around a lot and adjust. I’m confident out here, and when you’re confident, you just fish better. It’s funny. at Oahe, I was using probably the most aggressive technique possible. And this week, it was the polar opposite. Instead of finding them with down scan and fishing fast (like at Oahe), we found them with side scan and fished slow.

“At Oahe, I was in by 10 a.m. every day. I knew I had that one won. This one I didn't expect to win. I’ve had a rough last two or three years. This one lets me know in the back of my mind that I’m doing everything right. The best feeling of all is knowing I have my 7- and 9-year-old watching back home.”