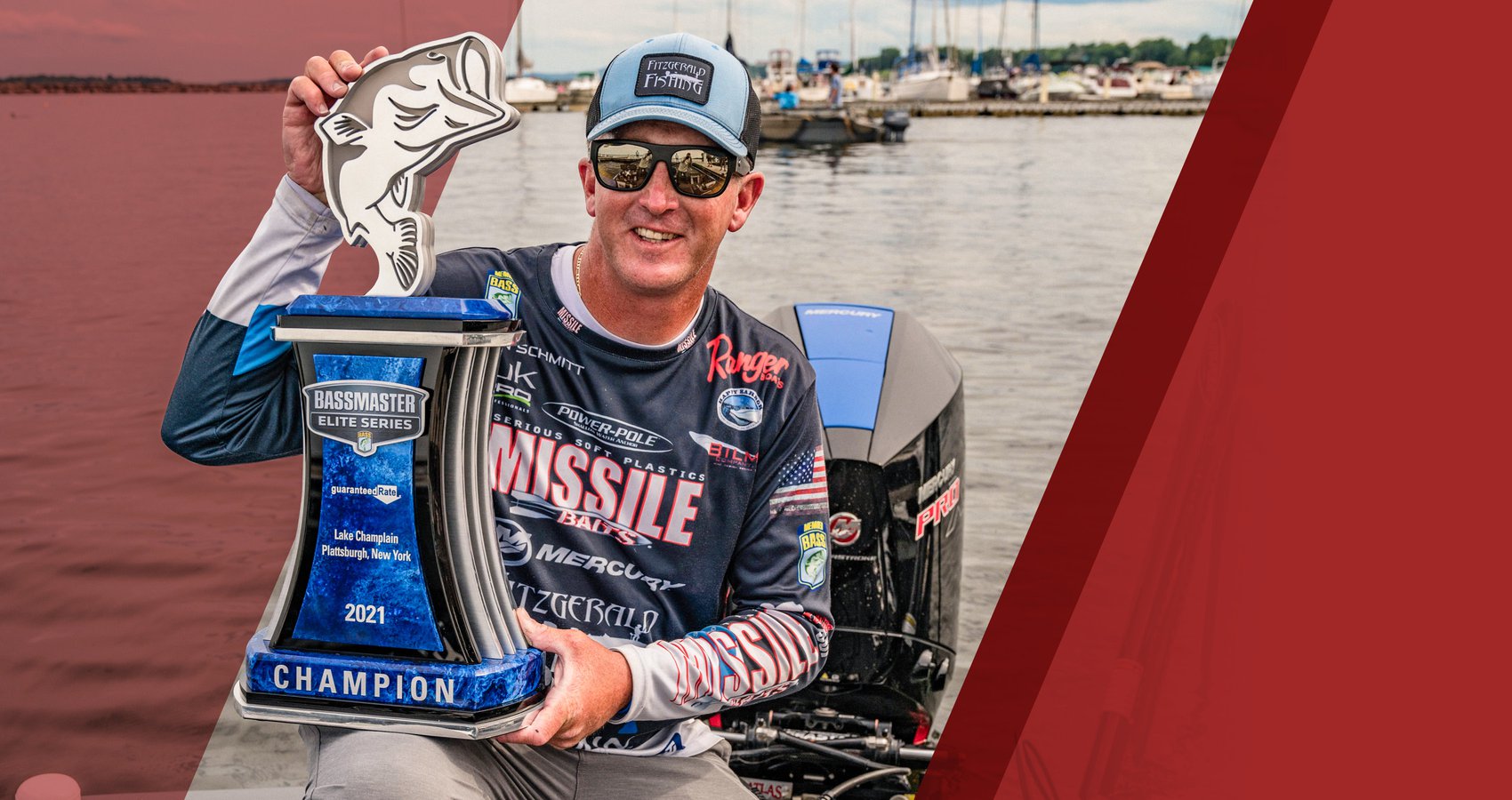 Mercury Pro Team angler Bryan Schmitt talked all week about “special little things” that were happening to help him maintain the lead at the Bassmaster® Elite Series event at Lake Champlain. 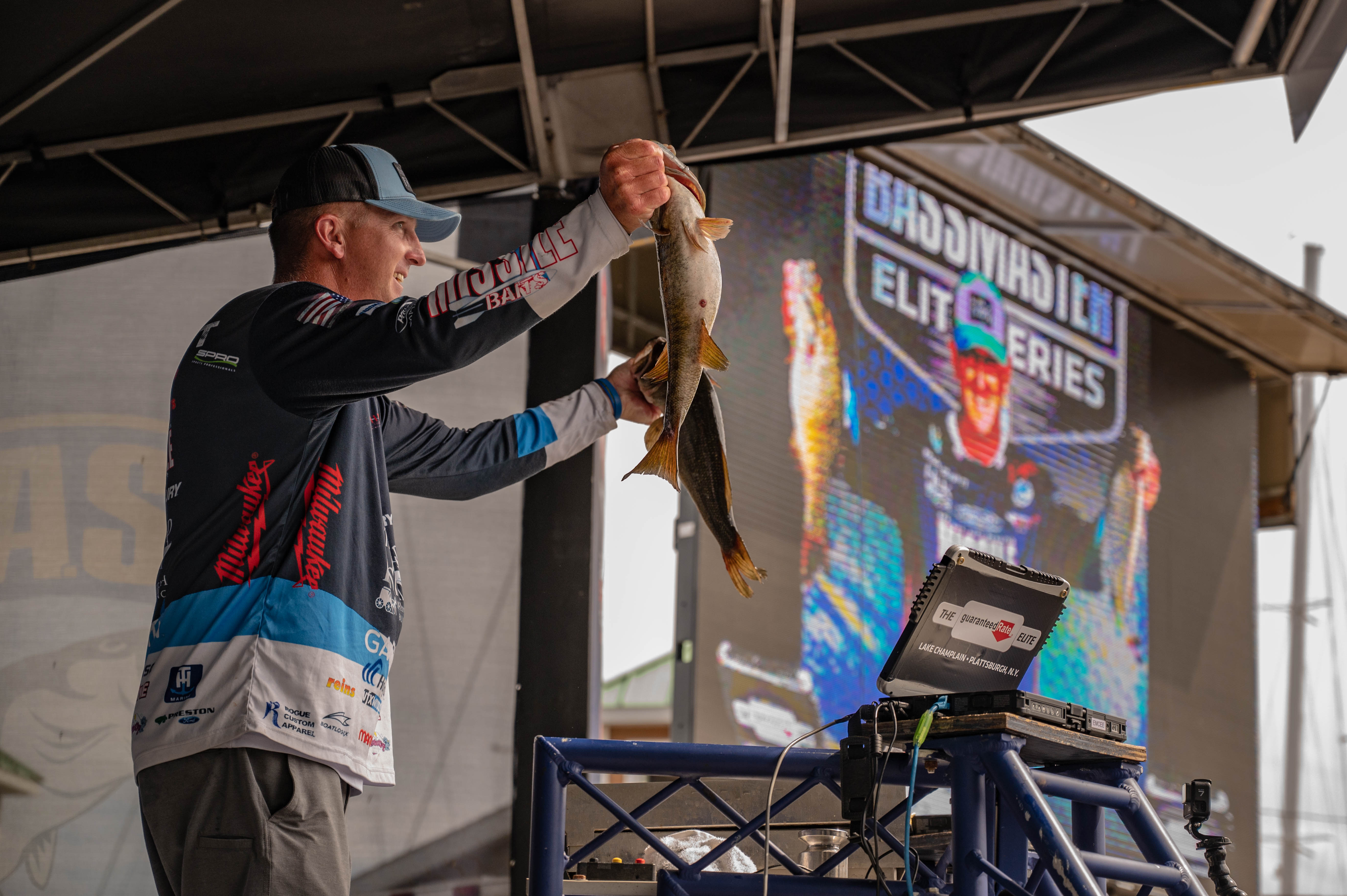 But the most special one happened just 15 minutes before the final weigh-in on Sunday, July 11, as Schmitt landed a 3 1/2-pound smallmouth that gave him a 12-ounce upgrade. That was enough to secure his first Elite Series win with a four-day total of 78 pounds, 5 ounces.

Call it luck. Call it fate. But the win seemed meant to be for the second-year Elite Series pro from Deale, Maryland.

“I pulled up to a buoy cable this afternoon (Sunday) right before time to come in and saw two fish on my (Garmin® Panoptix) LiveScope (forward-looking sonar),” Schmitt said. “I threw that drop-shot in there, felt the bite and didn’t really think it was a bass. But it turns out it was a bass, and without that fish, I don’t win.

“When things like that are happening, man, it’s a special week. A lot of times, that last-ditch effort, stopping at one last spot, doesn’t pay off. I caught this fish on my first cast in there. Did I think it was the winning fish? No, but it turns out that it was.”

“I just love Lake Champlain,” said Schmitt. “Sometimes, as an angler, you just click with certain lakes. The first time I ever went there, I clicked with it. I’ve done well in different places, too. I don’t have any magic spots. When I showed up the first morning of practice, I started getting some bites. It all happened quickly, and I got dialed in and was able to duplicate the pattern. I knew pretty quickly I could do all right.” 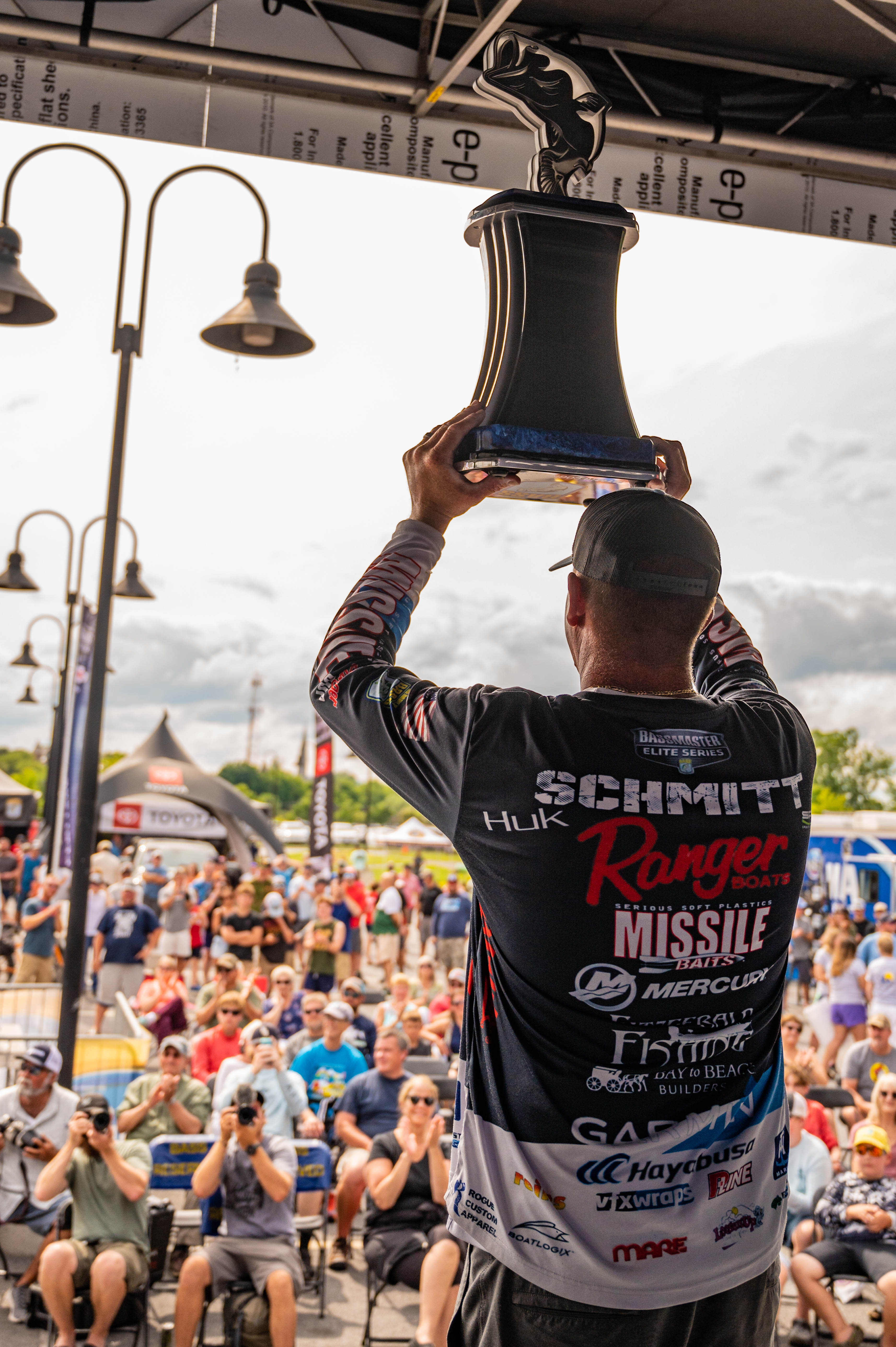 With 435 square miles of water, Lake Champlain is an extensive fishery, and according to Schmitt, many of the best spots require making a long run. The efficiency of his Mercury Pro XS® outboard allowed him to run and gun across large expanses of water on each tank, and he also relied on integrated SmartCraft® technology to be sure he was managing his fuel consumption properly.

Schmitt talked about a waning bite each day, but he still managed to catch 21-11, 21-5 and 19-4 over the first three rounds. Then on Championship Sunday, things did get tougher, and he only managed to bring in 16-1.

That barely helped him hold off a hard charge from Texas pro Keith Combs, who finished with 77-13 – just 8 ounces behind.

Another special element for Schmitt was the ability to overcome several unfortunate moments.

On Saturday, he had two key fish break his line. Then on Sunday, he lost several bass because of something he says he should have never allowed to happen.

“It took me three lost fish to realize that the point on my drop-shot hook had bent in,” he said. “That’s not a smart move. Out of those three, I’ll bet you at least one of them was a big one because they were on a spot where I had caught three 4-pounders this week.

“I was able to overcome those kinds of mistakes – somehow.” 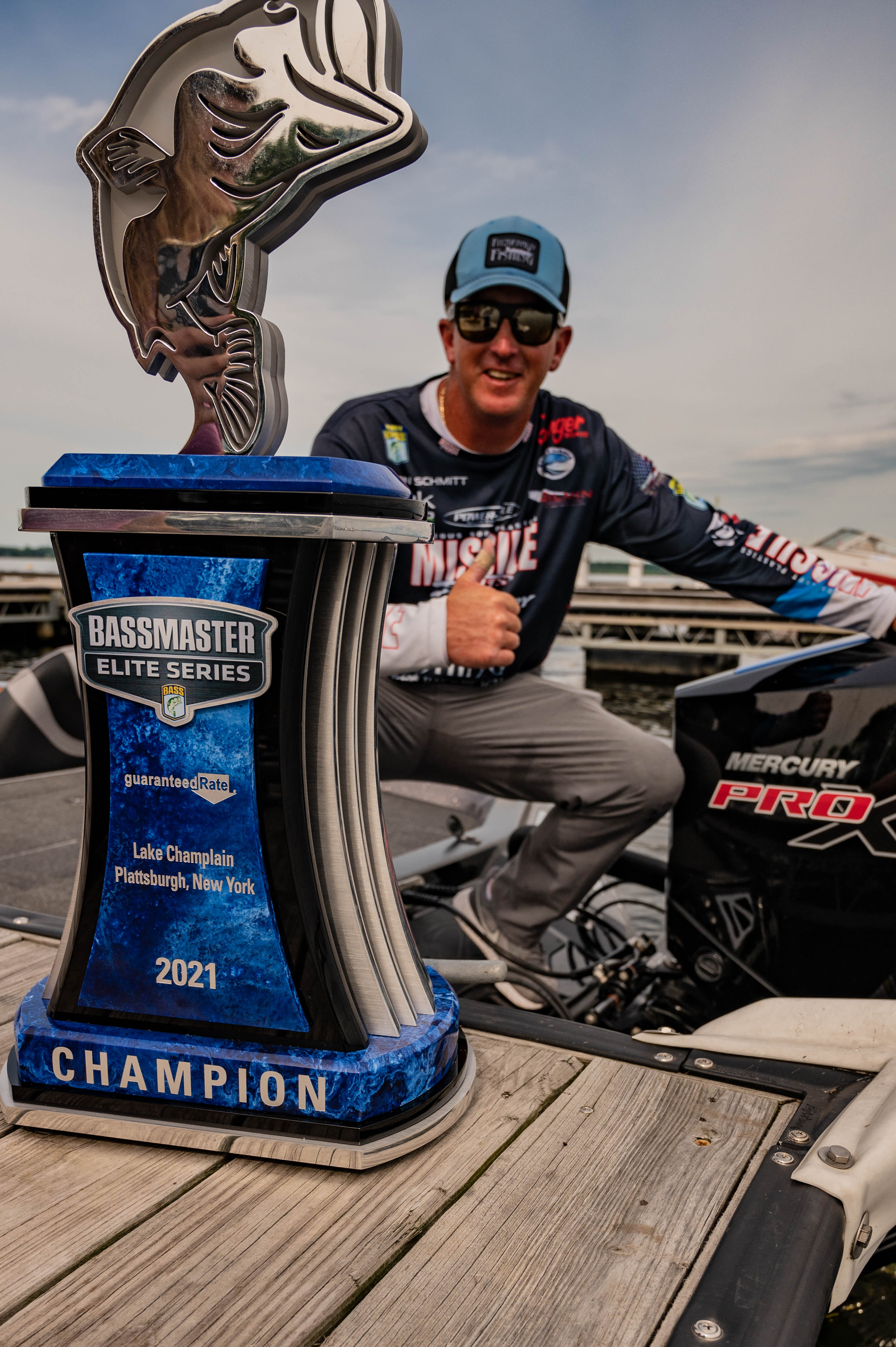 Even as he was standing in the weigh-in line the final day, Schmitt thought he’d blown his chance.

“I thought it was over; no way,” he said. “I knew one of these guys was going to have a good day, and Keith (Combs) did.”

Schmitt was right about Combs’ catch, but wrong about the outcome. Despite bringing in an impressive 19-3 limit, Combs didn’t have enough to catch the champ.

The Elite Series trophy is Schmitt’s second B.A.S.S. triumph. He also won the 2016 Bassmaster Northern Open also on Lake Champlain. Earlier in 2021, Schmitt won the Major League Fishing® BIG5 Toyota Series tournament on Lake Toho in Florida – his sixth win and the most ever on that circuit.

“I need to make the weekend cut at the St. Lawrence River (the final event of the season July 15-18) to feel guaranteed I am a Bassmaster Classic qualifier,” said Schmitt. “Making the Classic is 100% the reason I moved over to fish the Elite Series in 2020. I have attended a couple of Bassmaster Classic Expos before, and I can’t wait to fish one.”

“I love that accent panel. I really like the way it looks; I really do.”

Mercury pro Seth Feider, who came into the event just needing to avoid a total flop to maintain his lead in the Bassmaster Angler of the Year standings, did far more than simply survive. He finished in fourth place – his fourth top 10 of the season. Feider now has 699 points and holds a commanding lead over his closest competitors, Patrick Walters of South Carolina (644) and Mercury pro Chris Johnston of Canada (630).

Rookie of the Year Race

Nine rookies are competing in the 2021 Bassmaster Elite Series, all vying for the title of Rookie of the Year. With one event remaining, the top six anglers are all powered by Mercury. KJ Queen, of Catawba, North Carolina (523); Bryan New, of Belmont, North Carolina (499); Matt Robertson, of Central City, Kentucky (496); Justin Hamner, of Northport, Alabama (480); Josh Stracner, of Vandiver, Alabama (468); and Marc Frazier, of Newnan, Georgia (450), all have a shot at the title.

The final Elite Series stop of the year is July 15-18 on the St. Lawrence River out of Waddington, New York. You can follow the action and the Angler of the Year race at Bassmaster.com.