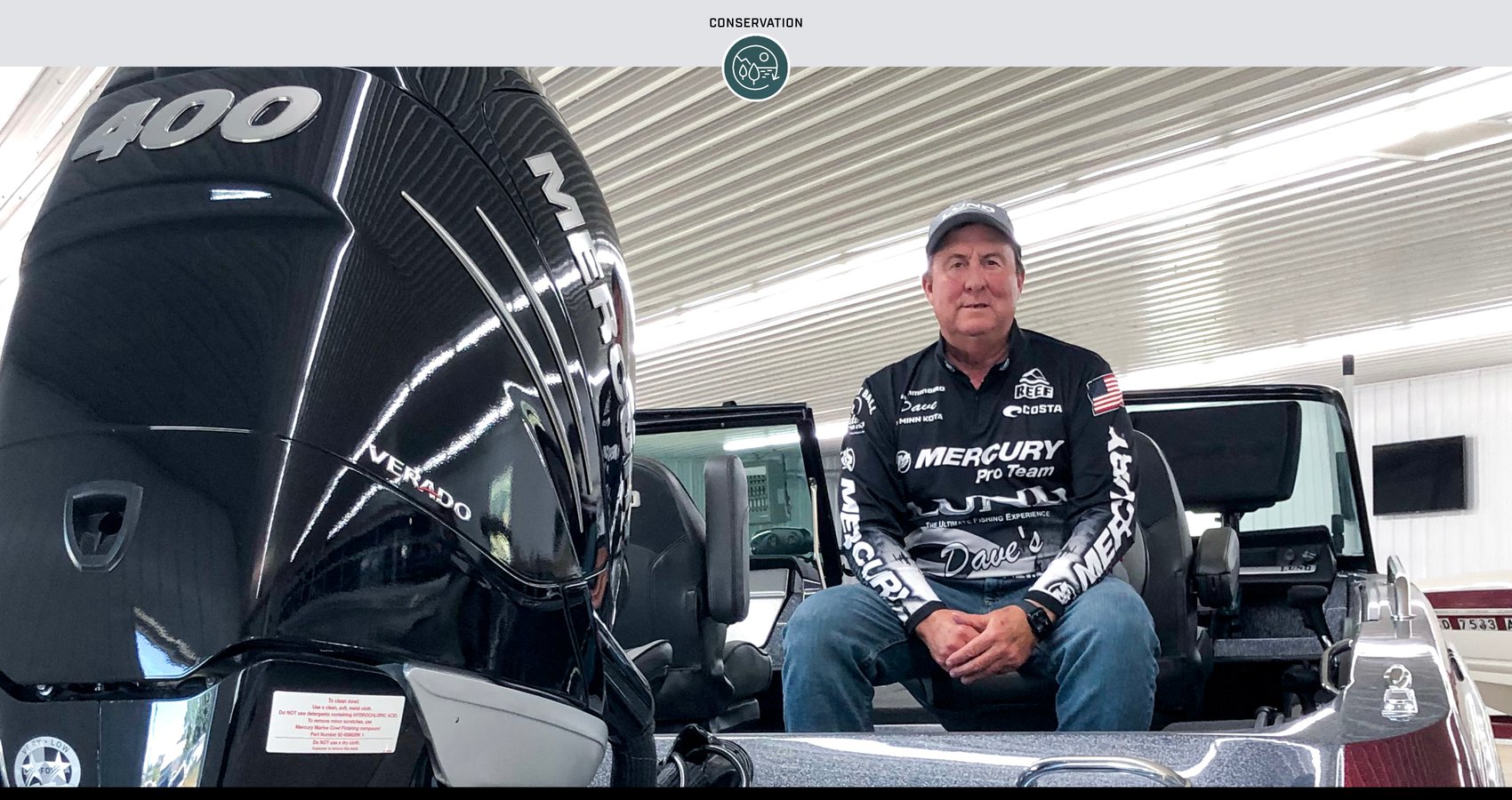 When zebra mussels were spotted in a lake just a mile away from his South Dakota home in 2020, Mercury Pro Team member Dave Charron sprang into action. As an angler and retired marine dealership owner, he knew if this aquatic invasive species (AIS) was allowed to spread to Enemy Swim Lake where he and his wife, Bonnie, owned a waterfront cabin, the impact could be devastating.

Small, zebra-striped freshwater shellfish that are native to the Caspian and Black seas south of Russia and Ukraine, zebra mussels are thought to have arrived in the U.S. in the ballast tanks of commercial ships. The first established colony was discovered in the Great Lakes region in 1988. Since then, zebra mussels have continued to spread westward by hitching rides on trailer boats that travel from boat ramp to boat ramp.

“In 2020, a barge service started pulling boat lifts out of a neighboring lake, and they had zebra mussels stuck on them. That really got my attention,” Dave said.

Wanting to learn more about the problems an invasion of zebra mussels could cause to Enemy Swim Lake, Dave contacted the Minnesota Aquatic Invasive Species Research Center (MAISRC). He learned that these shellfish use threads of protein to firmly attach themselves to hard surfaces such as boat hulls, boat lifts and docks, as well as natural surfaces like rocks and native mussels. Once a zebra mussel colony is established, it is extremely difficult to eradicate from a lake.

“They are filter feeders. They eat all the plankton in the lake until the water is clear. Then the sun is able to shine through to the bottom of the lake, and you have this explosion of weeds and algae blooms. It will ruin a lake,” Dave said. “Zebra mussels also leave sharp shells on the shore that if stepped on barefoot will cut your feet.”

Dave set up a series of Zoom meetings with MAISRC to educate his neighbors on Enemy Swim Lake about the potential dangers posed by zebra mussels. He also contacted to the South Dakota Department of Game, Fish, and Parks (GFP) to find out if it had any solutions to offer them.

“The GFP recommended we organize a lake association, which we never had before,” he said. As a result, in late 2020, Dave, Bonnie and other concerned local homeowners formed the Enemy Swim Preservation Association.

The new association received permission from the South Dakota GFP to start a pilot program to inspect watercraft before they were launched into the lake via its boat ramps. The cost to fund this program was estimated to be approximately $30,000.

“The Enemy Swim Preservation Association started a funding drive through a Facebook page, website and email list, and raised $48,000 in three short months, just in time to start inspecting watercraft in the spring,” Dave said. “Volunteers also were needed to help with the inspections, so a volunteer drive was started, and 50 to 60 people stepped forward to help.”

Throughout the 2021 boating season, signs were posted at the Enemy Swim Lake boat ramps that read, “All Watercraft Must Stop.” Volunteers registered the hull number of each boat and watercraft that arrived at the ramp and asked the owner whether the vessel had been on a lake known to be infested with zebra mussels. That was followed by a physical inspection of the vessel and its trailer. “It only takes about five to ten minutes if the boat is clean,” Dave said.

If the watercraft had been in a contaminated lake, or has visible signs of zebra mussels, volunteers used a decontamination unit filled with 140-degree water to pressure-wash both it and its trailer. That procedure takes about 15 minutes. Zebra mussels cannot survive the hot water.

“Inspections were 10 to 12 hours a day, seven days a week. Last year, approximately 1,700 watercraft were inspected, and 70 boats were decontaminated. The response from watercraft owners who went through the inspection was very positive,” Dave said.

This summer, the inspection program is back in full swing. Unfortunately, in July, one of Dave’s neighbors found a lone zebra mussel stuck to a rock near a boat ramp on Enemy Swim Lake. “We think it probably came in on a boat that was launched after hours,” he said.

However, the good news is that around the same time, Dave and his family took 15 water samples from around the lake and sent them to a laboratory for veliger testing.

“Veligers are the larvae hatch (baby zebra mussels) that float on top of the water when the water temperature is above 62 degrees,” Dave explained, adding that the results were negative.

Now, the Enemy Swim program is being offered as a template to other lake associations that want to protect their lakes from zebra mussels. While some states, such as Minnesota, already have watercraft AIS inspection programs in place, “There is no way any state agency can cover all the boat landings and launch ramps. It’s up to the lake associations, homeowners and sportsmen to do it,” Dave said.

Reflecting on what the Enemy Swim program has accomplished over the past couple of years, Dave said, “I think it shows if you are passionate about something and put your mind to it, you can make a difference. I would like to do my part to help preserve and protect our natural resources for future generations to come.”

He added, “All of the above could not have been accomplished without so many dedicated, passionate friends and volunteers who have donated a lot of time and money to this project and continue to do so. Our Enemy Swim group realizes that slowing or stopping the spread of aquatic invasive species is very hard to do, but the general attitude is, ‘We are not going down without a fight.’”

Quick Tip: How to Remove Aquatic Invasive Species from Your Boat

The boat is secure on the trailer, the sun is going down and the whole crew has that special mix of happy and tired that only comes from spending a great day on the water. It’s incredibly tempting to call ...