Creating the illusion of a feeding frenzy behind your boat is crucial for successful offshore trolling. 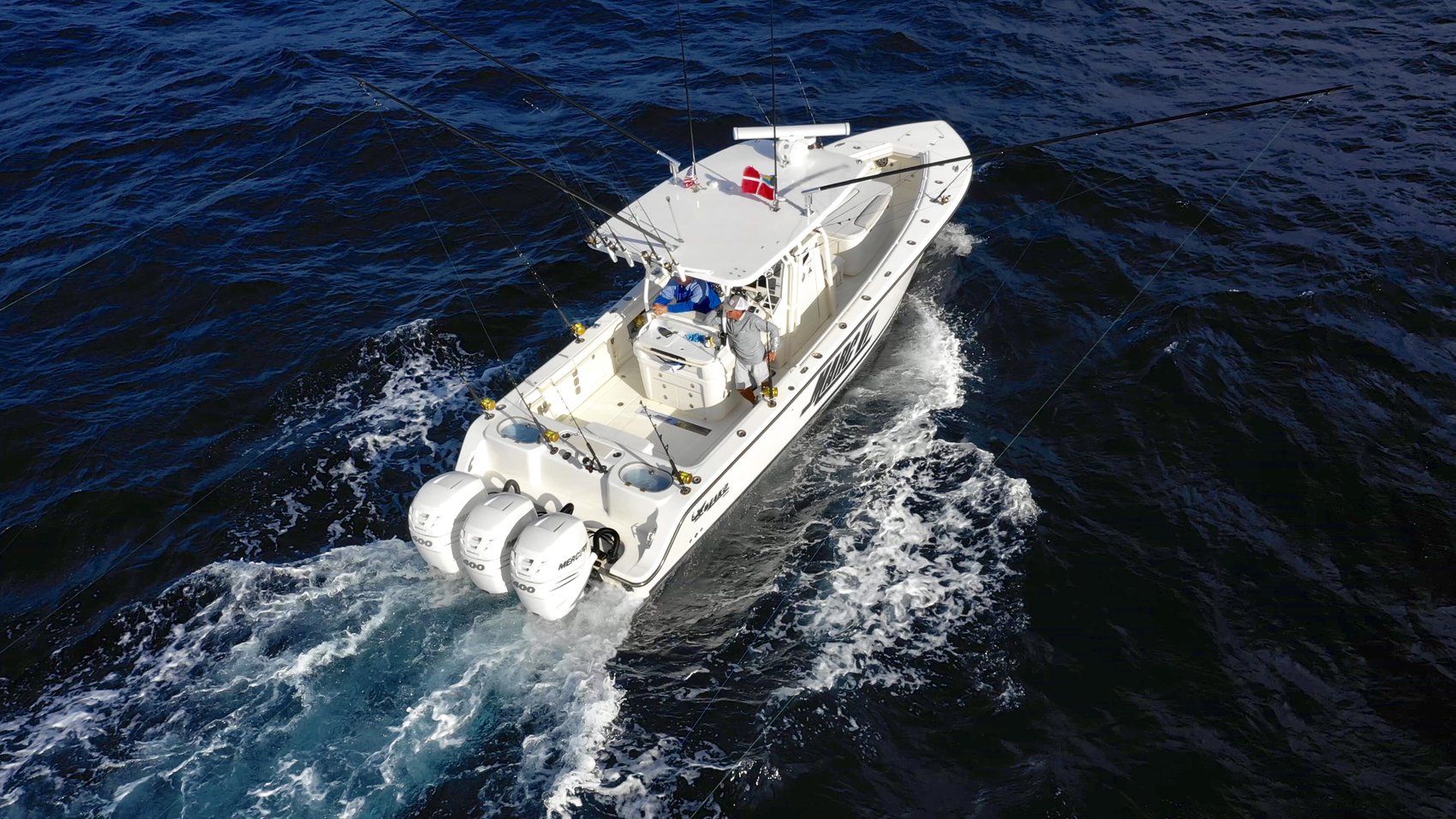 Creating the illusion of a feeding frenzy behind your boat is crucial for successful offshore trolling. Done properly, pelagic species such as billfish, mahi, tuna and wahoo will rise up behind the transom, looking for an easy meal.

I'm a firm believer that engines and prop wash attract fish from the deep. Aboard my MARC VI, a Mako 334 center console powered by triple Mercury 400hp Verado outboards, the sound of my outboards at trolling speed resonates through a deep, quiet ocean, eliciting a fish's attention. As a fish rises for a closer look, the air bubbles and trail from the prop wash appear as panicked, tightly-corralled baitfish. This feeding frenzy illusion also triggers that fish's competitive nature and, in turn, an aggressive feeding attitude.

Playing off the outboards, we'll deploy a hookless teaser off each outrigger, in the clean water to the outside of the prop wash and approximately where the wash begins fading. These teasers, often a squid daisy chain or hookless marlin lure, splash enticingly at the surface and appear as baitfish that have separated from their school.

At times, a dredge is also deployed off each transom corner. A dredge can be as simple as several long, clear plastic strips decorated with reflective fish decals, or intense as 50 to 300 fresh, hookless ballyhoo or mullet. They're weighted, so the baitfish school illusion undulates several feet beneath the surface. Position dredges just far back and deep enough to where they're still in view, along with any gamefish rising to one.

With the water right behind the transom "lit up" like a Christmas tree with teasers and dredges, we'll deploy five trolling baits in a staggered formation. These typically include a pair of flat line baits positioned not that far behind the dredges and teasers, a pair of outrigger baits some 200 to 250 feet behind them, and a center rigger bait way behind the spread.

We'll keep two "pitch" bait outfits ready for gamefish rising to a teaser or dredge. For mahi, sailfish, and white marlin, we’ll have a 20-pound-class spinning outfit with a 50-pound fluorocarbon leader and small ballyhoo bait. For blue marlin, we’ll use a 50-pound-class standup outfit rigged with a 300-pound fluorocarbon leader and a Spanish mackerel bait.

When setting the hook, regardless if it's with a pitch bait or trolling outfit, keep the boat heading straight and at the same trolling speed for 30- to 45-seconds. Doing so will help set the hook more effectively by taking the stretch out of a monofilament line. In addition, the remaining baits will still be in play, and this is how you score those double, triple and sometimes quadruple headers!

The weekend is finally here! Time to leave the stress of the weekdays behind and pit your wits against your favorite species of fish, or perhaps just relax and enjoy fresh air, beautiful water and awesome sunshine. However, you first ...