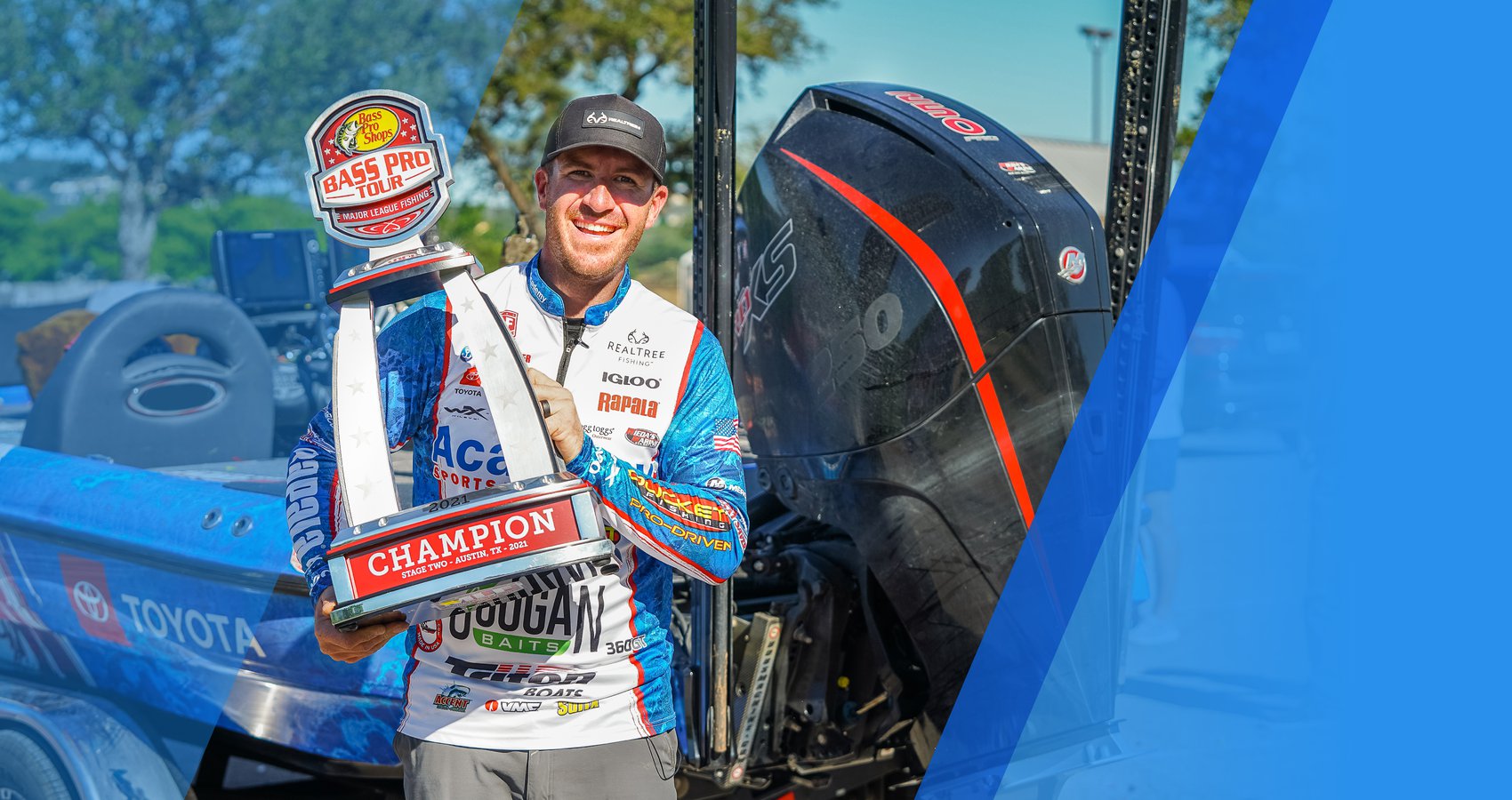 In the closest finish in the three-year history of the Major League Fishing (MLF) Bass Pro Tour (BPT), Mercury Pro Team member Jacob Wheeler of Harrison, Tennessee, won the BPT Berkley Stage Two at Lake Travis Presented by Mercury by a 2-ounce margin. He took home the top prize of $100,000 for the event, which was held April 30-May 5 in Austin, Texas.

The win will also add more distance to Wheeler’s lead in the BassFan World Rankings. As of March 3, 2021, Wheeler led the rest of the MLF and B.A.S.S. anglers by a healthy margin of 35 points and has held the top spot since mid-2019. From the looks of things, he could maintain it for the foreseeable future.

At age 30, Wheeler now has six career tour-level victories to his credit. In addition to the three BPT wins, Wheeler’s resume includes two Bassmaster Elite Series wins (2014 on Lake Chickamauga and 2017 on Cherokee Lake), a Forrest Wood Cup title (2012 on Lake Lanier) and an MLF Pro Circuit win (2020 on Lake Chickamauga). Wheeler also won the 2011 FLW Bass Fishing League All American tournament on Cross Lake in Louisiana to jump-start his rise to the professional ranks.

“Winning tournaments is a factor of two things for me,” said Wheeler, “having a winning mindset and preparation.”

The Mindset to Win

For Wheeler, success at the top levels feeds more success.

“Once you get a taste of winning, you just ‘get it,’” said Wheeler. “Look at guys who have won multiple tournaments. They learn the mindset it takes to win. Look at Ott DeFoe. He wins every year, it seems. Winning a tournament just helps you understand what it takes to win. It is hard to explain. Winning helps me visualize future wins.

“Part of that winning mindset is putting yourself in positions to win. Yes, I have some wins, but I also have a ton of seconds, thirds and top 10s. So putting myself in a position to win is where the preparation comes in.”

All professional bass anglers pour incredible hours and dedication into tournament preparation. In Wheeler’s case, he consistently tries to go above and beyond the competition.

“I’m OK with not winning if I know I gave the whole event 110%,” he said. “I don’t like to be out-worked. For each tournament, I do map study and internet research for an average of two full eight-hour days. It just takes a lot of time. And that’s not including tackle prep, either – rods and reels and getting my boat rigged up. That two days is just the time spent preparing and visualizing.

“I started looking at Lake Travis last year in December when the schedule came out. I looked at aerial photos and started thinking and visualizing how I thought the event would play out. The funny thing about this event is that I thought the fish would be out in deeper water, but that was not the case. As the event progressed, it became clear where the fish were.”

Wheeler’s Lake Travis one-two pattern involved a vibrating jig and a topwater bait fished around boat docks. He would pick apart a floating dock with the vibrating jig, then throw the topwater bait in between while making his way to the next dock.

“The big key with the docks was that there was only a certain zone of the lake that had a little bit of dirtier water. The water clarity was the key more so than anything,” Wheeler said. “I couldn’t catch them on the flatter docks; it needed to have a channel bank or deeper bank adjacent to it. If it didn’t have 10 feet of water or more (beneath it), I wouldn’t get a bite.

“The little ones (bass) would stay on the outskirts,” Wheeler continued. “I realized the big ones were in the top 5 feet of the water column, and that was the key with the vibrating jig.”

While Wheeler had visualized winning in deeper depths, he was prepared to adjust and use whatever equipment was necessary to get the win.

“Boat and tackle prep is another full eight-hour day,” he added. “I try to have 40 rods and reels rigged up and ready to go. I do a lot of behind-the-scenes work that no one ever sees.”

Then there is the part of his career that everyone does see. Wheeler is a fan favorite on social media. His YouTube channel boasts 115,000 subscribers.

Wheeler chronicles his tournaments from start to finish, so fans get glimpses of that preparation as well as in-the-boat action.

The next event for Bass Pro Tour anglers will be the Favorite Fishing Stage Three Presented by Bass Cat Boats, held May 21-26 at the Harris Chain of Lakes in Leesburg, Florida.

In addition to online research and map study, Wheeler spent considerable time at the Harris Chain before it went off-limits to the competitors.

“I rode around for a day and a half to get a feel for the playing field,” he said. “I have never been to the Harris Chain for a tournament, so I spent time riding around looking. I put some serious hours on the Mercury checking everything out.”

“In other sports, the playing field is pretty much the same every time, with just a few variables. Our court changes every week, so I have to do my due diligence,” Wheeler added. “I have to see the field so I can visualize how it will set up, see what cover is in the water, what the water clarity is – factors like that. You can rest assured I’ll be ready come tournament time.”

Full results for the entire field can be found at MajorLeagueFishing.com.