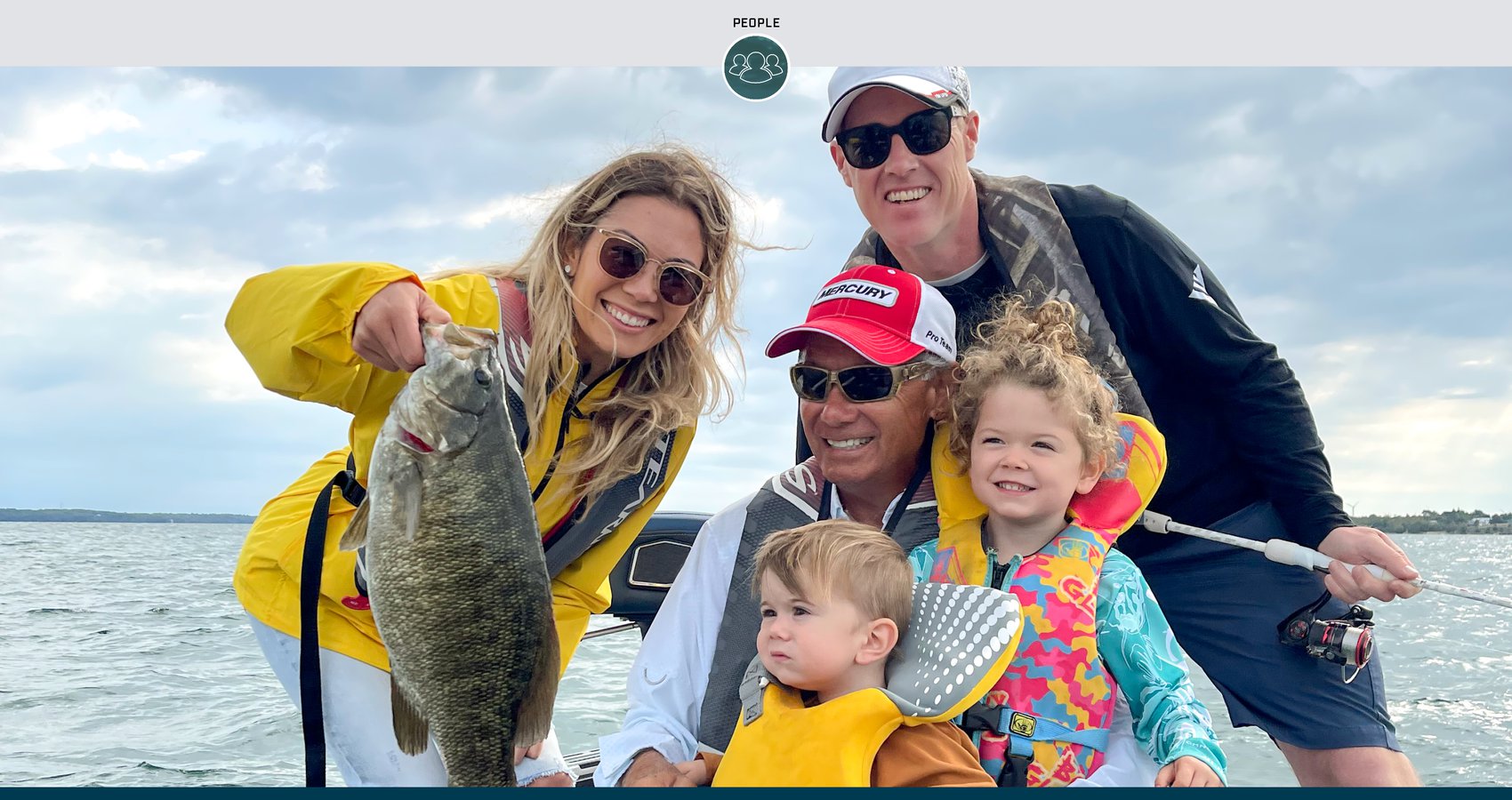 But Mariko – who was coincidentally born in 1983 – gets full credit for determining who she would become.

On the surface, Mariko is an accomplished angler and outdoors TV host. From 2009 to 2015, she starred in “Hookin’ Up with Mariko,” a popular fishing and travel show on the World Fishing Network. That job earned her “street cred” in the broadcast world, and in January she launched her second TV show, “Instill the Catch,” which encourages families – especially moms and their children – to explore the outdoors together.

Like her famous Uncle Bob of “Bob Izumi’s Real Fishing Show,” Mariko is a TV sensation. Her friendly demeanor and strong, believable on-air presence are backed by first-hand knowledge of topics on her show.

But Mariko is much more than a TV host. When not in front of cameras, Mariko is the mother of two young children, the spouse and business partner of a former pro hockey player turned fishing guide, a popular blogger, an avid angler and a boundary-breaking innovator who coincidentally clears paths for other women.

Knowing how and why those paths should be cleared is perhaps Mariko’s greatest strength.

“The reality is, as a woman, you will likely have to balance more roles in life (than men) but pursuing a job that you are really good at and passionate about is worth the extra life management,” Mariko said.

“Since I'm really in the meat of being a mom of such young kids, I tend to want to make life as simple as possible because, as a mom, you're just totally overrun with thoughts and responsibilities twenty-four/seven. So, I understand not wanting to add to the pile. However, I truly believe there’s a lot to be gained by adding to the pile – even during the craziness of being a mom of young kids.

“If you can just see the beauty of things, whether it's travel or adventure or fishing or all of those things, and just be comfortable knowing that no matter what you do you'll face more challenges – they're just different challenges – I think you'll get a lot out of life.”

How This All Got Started

Wayne Izumi (Mariko’s father) said he and his brother Bob became promising anglers “growing up poor on the north shore of Lake Erie” in the 1960s.

That low-cost entertainment created a huge career opportunity for Bob when, in 1979, he became Canada’s first full-time professional angler. He went on to win more than 70 major events – the most by any Canadian angler.

In 1983, Bob and Wayne created a TV fishing show – the first of its kind in Canada – titled “Bob Izumi’s Real Fishing Show,” with Bob hosting and Wayne managing the business. It started out as a hit and grew consistently stronger for 38 years.

Mercury Marine was one of the first sponsors to climb aboard Team Izumi in 1983, and the partnership remained solid for nearly four decades. Bob and Wayne announced in February that 2021 was their final year of broadcasting “Bob Izumi’s Real Fishing Show.”

Mariko was born in Ancaster, Ontario, a small but historic town (founded in 1793) not far from Toronto. She said her early years were dominated by television productions and fishing trips – including unscripted appearances on Bob and Wayne’s “Real Fishing.”

“I grew up with TV cameras always on around us and business being discussed at the family dinner table,” she said. “We (the extended Izumi family) just got used to it.”

Mariko would graduate with honors and a bachelor’s degree in French studies from Queens University in Kingston, Ontario – the first Canadian university west of the “maritime provinces” to admit women.

But it wasn’t long before she returned to the family’s roots and hosted a webcast called The 5 Cast with Mariko Izumi on the World Fishing Network. Success with the webcast led her to pitch a TV show that combined travel, people, food and fishing – and WFN gave her a shot.

When “Hookin’ Up with Mariko Izumi” hit the airwaves, Mariko’s on-air persona – and the tone and content of her show – were strikingly different from those of her famous fishing uncle. By that time, Bob Izumi had been the engaging, down-to-earth and extremely credible host of his how-to-catch-fish program – sort of a Canadian version of Bill Dance Outdoors – for 26 years.

But Mariko said “Hookin’ Up with Mariko” allowed her to create something new, to serve as an on-air guide for excursions to far-off lands, waters and cultures. She introduced viewers to exotic locations around the globe and helped them plan their own “next fishing vacation.”

But food, culture and people always played equally key roles in “Hookin’ Up.”

In contrast, Mariko’s current show, “Instill the Catch,” explores aspects of life she hadn’t experienced before having children. Throughout 2021, Mariko and a crew from InMist productions created 13 original episodes of “Instill the Catch” that offer unique looks at traveling and fishing from Mariko’s new point of view as a spouse and, more relevantly, as a mother.

Accompanying Mariko on every “Instill the Catch” journey – and appearing on every show – are her 4-year-old daughter, Yale, and her son, Tiger, who will be 2 this year. Their father, Kevin Estrada, and Mariko have been together since 2015.

The pilot show that introduced “Instill the Catch” opens with two sleepy-eyed youngsters getting buckled into the backseat of an SUV that is soon heading down a dirt road road with their mom at the wheel. That scene fades out and is replaced with fishing rods in the hands of both kids, who are now fishing from a boat while sporting mini lifejackets.

On each episode, wherever Mariko goes, Yale and Tiger are right there with her, fishing, boating, exploring and learning.

“Mariko has an ability to tell stories about life issues,” said her father. “Her show ‘Instill the Catch’ isn’t your average fishing show – it’s not catching fish after fish then saying, ‘Well, here’s how you do it.’ She’s very good at speaking from the heart and she’s very articulate.

“The show is an interesting concept and she does a wonderful job presenting it.”

Like the “Real Fishing Show” before it, “Instill the Catch” is sponsored by Mercury Marine.

“When we first came up with the concept of this show, Tiger was six months old and Yale was 3 and a half,” said Mariko. “I've never been an actress; I've always just portrayed myself. So it was, ‘OK, let's feature this life of ours,’ which in some ways is relatable to everybody, but in other ways it's not so much because we're so fishing-heavy as a family – and we still travel a lot, even with the two kids.”

Partners in Life, Partners on the Water

Kevin Estrada is the founder and owner of Sturgeon Slayers, a highly regarded fishing-charter company based in Chilliwack, British Columbia, which is home to the family of four. Mariko is the company’s director of operations.

Kevin was born in nearby Surrey – less than an hour drive from Chilliwack – and started playing hockey when he learned to walk. Those years of experience, combined with exceptional talent and sharp skills, ultimately led him to play hockey for the University of Michigan and being drafted by the Carolina Hurricanes of the National Hockey League.

After a decade playing in various leagues around the world – and surviving a life-threatening plane crash – Kevin founded Sturgeon Slayers and started plying his angling skills on the Fraser River during the summer while continuing to play hockey in the winter.

Contradictory to the name of the charter company, Sturgeon Slayers is a catch-and-release outfitter, and Kevin works constantly to protect fish – specifically sturgeon – and the fisheries where he works and lives.

Mariko plans to stay on the water and on TV so she can share nature and her outdoors world with mothers and their children.

“I would love to continue showing parents the possibilities of taking advantage of all the nature that surrounds them – really taking advantage of it and immersing their kids in a way that they can learn all sorts of life lessons they can’t learn in school,” she said.

Matty Wong needs a new home, but he’s in no rush to find it. Despite competing in the 2022 Bassmaster Classic – the pinnacle of bass tournament fishing – Wong, a rising figure in the bass world, will tell you ...