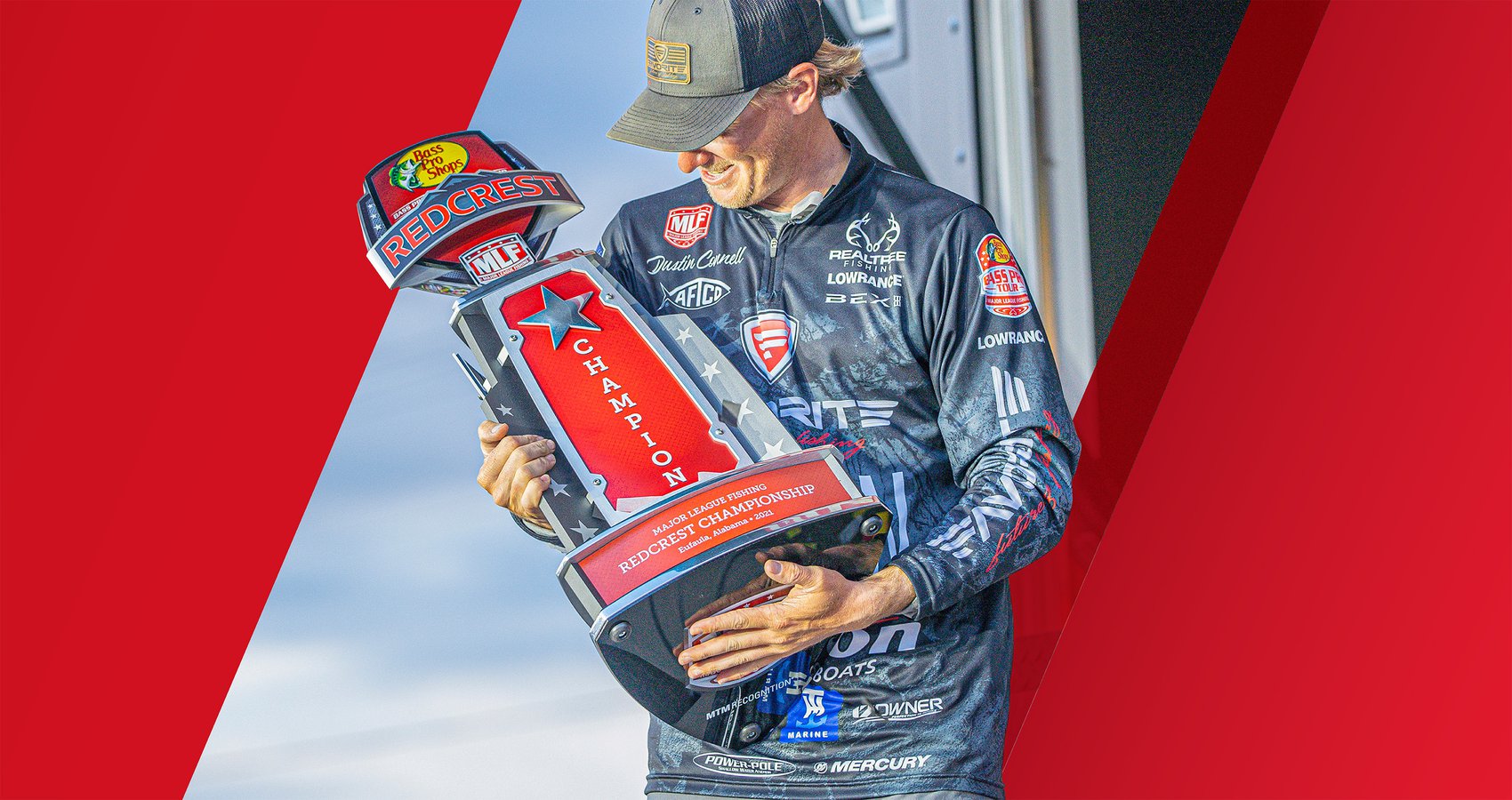 Mercury Pros took the top five spots and nine of the 10 positions in the finals. Connell becomes the second-ever REDCREST Champion. The nine Mercury Pros in the final round earned a total of $537,000 in winnings from the no-entry-fee event. Mercury Pro Edwin Evers of Talala, Oklahoma, won the inaugural event in 2019 on the Mississippi River.

After the 2020 Bass Pro Tour season-opener, also held on Alabama’s Lake Eufaula, Connell was featured in a Dockline blog. He had finished fifth in that tournament and credited much of his success to the sheer amount of fishing he does.

“I love fishing so much that I just can’t not go,” he said in that blog. “I fished all winter. I feel like it keeps me in the groove. My casting mechanics are better, and it keeps me sharp mentally. If I don’t fish for a couple of weeks, then I am not as sharp as I can be.”

2020 was a year filled with fishing trips for many, as people sought refuge in the outdoors. Connell also spent more time fishing.

Case in point, Connell took the day after the tournament off to unpack, respond to media requests and spend time with family, but then went fishing the next day on Lake Jordan in Alabama.

The Journey to REDCREST on Lake Eufaula

Finishing sixth in the Bass Pro Tour points standings qualified Connell for the 2021 REDCREST Championship, scheduled for Texas’s Lake Palestine. Historic cold weather forced a change in venue at the last minute, and the event moved to Lake Eufaula only days before the tournament.

Lake Eufaula is two hours away from Connell’s hometown of Clanton, Alabama, and he was intrigued by the development.

“I’ve fished Lake Eufaula for about 10 years now, but I haven’t fished it much,” Connell said. “I had taken a pre-practice trip to Lake Palestine and liked it. I was all rigged up for tough fishing in freezing weather, but I was excited about it because none of us (the other 39 competitors) had really fished the lake before.”

Connell had been fishing a lot lately on his home waters of Lake Mitchell. While a vastly different type of fishery than Eufaula, Connell was spending valuable time learning the ins and outs of utilizing forward-facing sonar to catch bass in cold water. Lowrance’s ActiveTarget recently joined Garmin’s LiveSight sonar in the market, and anglers like Connell are learning how valuable it can be.

“I would have caught some fish, but I would not have won this tournament without my Lowrance ActiveTarget,” Connell said. “I literally watched every single fish that I caught (in the final round) come out of the brush piles and eat it on it.”

The top four finishers were all using forward-facing sonar and seeing bass eat their baits on the screen.

While the style of fishing was much different than in past major fishing championships, the emotions and deep sense of accomplishment was not.

“I still can’t believe this; I really can’t,” said an emotional Connell on-stage after being awarded the REDCREST trophy. “This is truly what dreams are made of. I look around, and I see guys like Jacob (Wheeler), (Bryan) Thrift, Ott (DeFoe), and I am just so blessed to be fishing against these guys. It’s an honor just to be here and compete. To come out of here with a win, this is a dream come true.

“I was shook up the entire third period,” Connell went on to say. “It got real for me when there were 10 minutes left. I was standing on the deck and just praying. All the work, the time that I have spent learning, the sacrifices my family has made, it all came down to that moment. I haven’t been this emotional in a long time. I am so incredibly thankful and blessed. I’ll say it again – this is my dream come true.”
Connell’s quest to get to Championship Friday was not easy and certainly reflected his prowess as an angler. On Monday, the first day of competition, Connell caught five bass totaling 15 pounds, 5 ounces to finish the day comfortably in 12th place. Tuesday, Connell only managed two bass and squeaked into the top 20 cut in 19th place to barely advance.

“I threw a swimjig all day long on day two, and it just wasn’t happening,” Connell said. “I caught a 5-pounder on a crankbait, and I am so lucky – had that fish not bit, I would not be here today.”

In Wednesday’s Knockout Round, Connell started to put the pieces to his winning pattern together.

“Near the end of the Knockout Round, I knew I had made the Championship Round. So, I spent the last 45 minutes idling in one area and marking every single brush pile that I could. I was going to fish them all on the final day.”

On Friday, Connell returned to the brush piles and caught fish consistently all day to earn the victory.

The Dockline blog from last year concluded with the statement: “Calm nerves, spending time on the water, and a deep love for fishing are serving Connell well competing against the best anglers in the world. He’s showing no signs of slowing.”

Based on the past season and Connell’s REDCREST win, it looks like he might just be getting started.