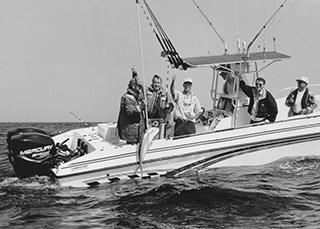 The power of the President, in the case of George H. W. Bush, also means horsepower, and Mercury Marine has powered Bush family boats since 1974.

It was then that the future 41st President of the United States, an avid boater and angler, purchased a 28-foot Cigarette boat powered by MerCruiser sterndrive engines. “Fidelity” became world famous, serving Bush — through two engine repowers — until he left the White House.

Wanting a replacement better suited to fishing, Bush took delivery of a 31-foot center console Fountain with twin 200hp OptiMax outboards during a visit to the Fountain factory in 1998. Bush traded up in 2004 for a 34-footer with 275 Optis and again in 2006, when Fountain owner Reggie Fountain and Mercury executives delivered a 38 Fountain with triple Verado outboards to the Bush family compound in Kennebunkport, Maine.

Mercury sponsored the George Bush Bonefish Tournament, benefiting the Barbara Bush Foundation and the Florida Conservation Association, and the former President was the keynote speaker at Mercury’s dealer meeting in 2000.