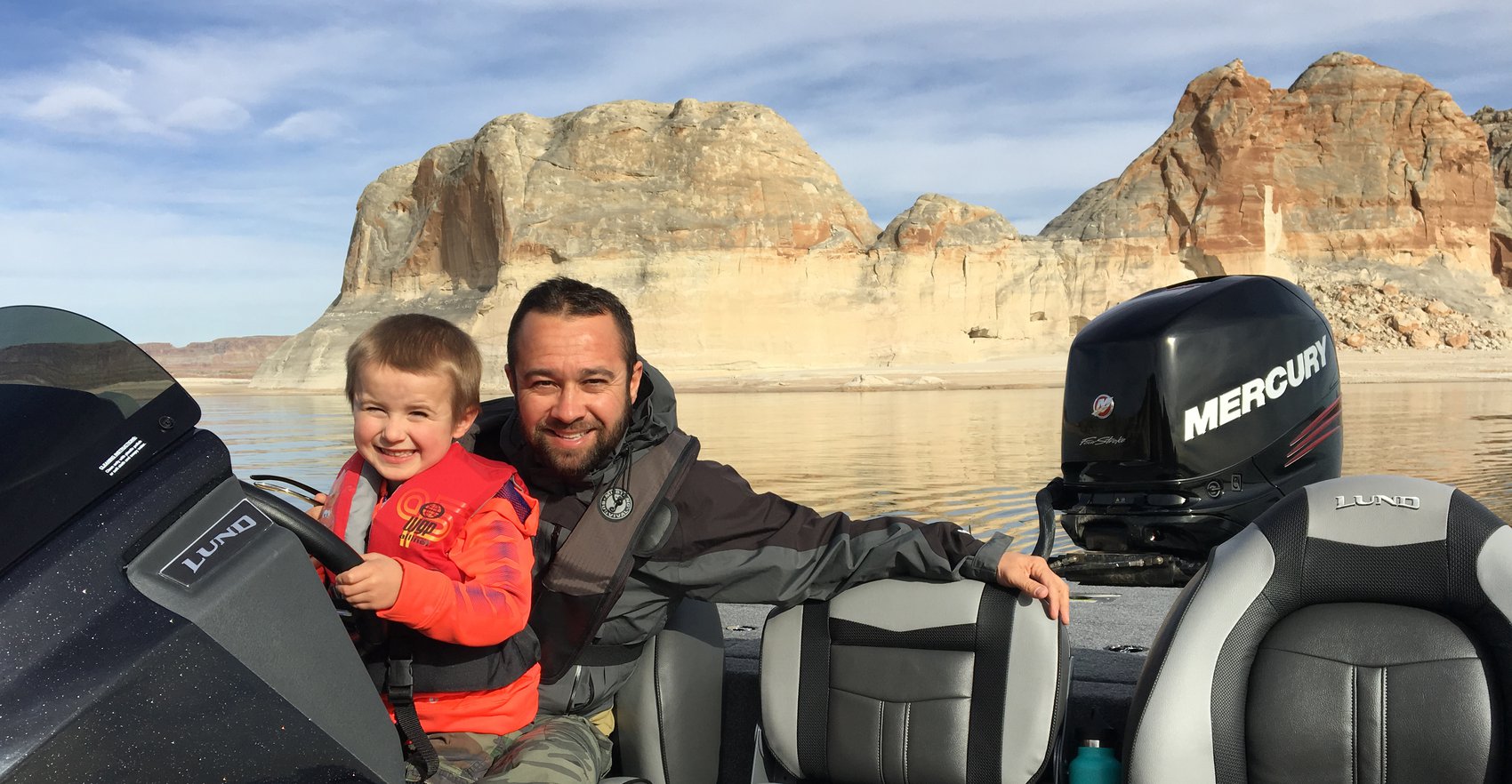 It all started with a single fish.

But in 1997, Edwards was just a 17-year-old kid from tiny Del Norte in southcentral Colorado who loved to fish. He was already an avid angler and outdoorsman, but still just a kid – like countless others – with big dreams and boundless energy, trying to help steer where life was going to take him. He had expressed a desire to forego college to pursue professional angling, so his father challenged him to prove he could do it. Thus Edwards launched a quest to catch the state-record largemouth bass, traveling almost an hour each way over a mountain pass every day after school to fish. On Sept. 22, 1997 – the 31st day of the quest – Edwards struck gold and started down a path to angling stardom.

That day on Echo Canyon Reservoir, an obscure lake in southwestern Colorado, Edwards defied all odds and reeled in an 11-pound, 6-ounce largemouth to establish a state record that still stands. He had called his shot and delivered.

“The good Lord set that one up for me,” Edwards, now 40, said of his goliath catch. “And being just 17 years old it opened a lot of doors. Suddenly I was making appearances at outdoor shows and learning to deal with the media; it taught me a lot.”

That fish was just what he needed to jumpstart his fishing career. He was soon entering every tournament he could find, and after graduating from high school he moved to the Lake Powell region in Arizona to work as a fishing guide. After competing in the Bassmaster Western Open tour a couple of years, he landed in the ESPN Bassmaster Top 150 Series – at the time the premier tier of the sport – at just 22 years old. Three years later, he became the youngest qualifier for the prestigious Bassmaster Elite Series and was fishing fulltime against the best bass anglers on the planet – and was holding his own. In just eight years, the far-fetched dream had become a happy reality.

Then it all nearly ended with what seemed at first like a little bump.

He was fishing a tournament in Georgia in 2005 when he felt a small knot under his left collarbone.

“It was like 34 degrees out, so I had borrowed a helmet that day,” he said. “Coming in, the waves were close to three feet and that helmet was bouncing around really bad.

“That night, I felt a hard knot under my left collarbone where the helmet had been hitting me, which I thought was really unusual.”

At his next tournament near Charlotte, N.C., he stopped at an urgent-care clinic to get it looked at. The doctor there said it was from a cold and sent him away with a prescription. Still concerned, he visited a hospital emergency room, where doctors took his condition more seriously and ordered a CT scan.

“The next day I’m coming in off the water and my wife is standing at the boat landing crying,” he said. “They found four tumors. They told me they didn’t know what kind, but that I definitely had cancer and needed to see an oncologist right way.”

Soon after, doctors in Denver diagnosed him with Stage 2b Hodgkin’s lymphoma, a cancer of the lymphatic system. He was just 25 years old, yet suddenly his career and very life were in serious peril.

Hodgkin’s lymphoma most commonly strikes people in their 20s and 30s. There are many high-profile survivors of the disease – NHL legend Mario Lemieux, Major League All-Star Anthony Rizzo and actor Michael C. Harris of “Dexter” fame, to name a few – and five-year survival rates in the US are greater than 85 percent. However, it’s still cancer, and surviving it means enduring months or years of treatment and setbacks, not to mention pain, fatigue and a limited ability to work and enjoy much of what life has to offer.

“The first round of chemo literally nearly killed me,” he said. “It’s a time that taught me what’s really important in life.

Edwards’ treatment culminated in three rounds of intense radiation treatments and chemotherapy. It was a living hell, but the one-time angling prodigy endured and kept his eye on the goal of beating the disease. Eight months after discovering the innocuous little bump, he was pronounced cancer-free. He said cancer tested – but didn’t alter – his Christian faith, and he credits his relationship with God with helping him beat the disease and saving his life.

He returned to the tournament trail and enjoyed some early success, but ultimately the toll taken on his body and psyche sent him home. He was mentally and physically exhausted, and the chemo left his skin so vulnerable to the sun he was continually blistered and sore.

“Mentally, I thought I was ready, but I wasn’t,” he said. “Financially I needed to be out there, but at the time my body couldn’t take it and my heart wasn’t in it.

“My dream of wanting to fish was silly to me at that point. It was all I had wanted to do for so long. But after cancer, catching fish and weighing them on stage became not that big of a deal to me.”

After a bit of reflection, he emerged with a new dream of making his mark in television. He tackled it with the same single-minded purpose that had propelled him to bass fishing’s highest ranks, and he’s been rewarded with perhaps even greater success than he had on the tournament trail.

Today, he’s best known for hosting Jarrett Edwards Outdoors, an award-winning fishing show that airs weekly in the US, Canada and Mexico. The show features celebrity guests and professional anglers accompanying Edwards on all types of freshwater fishing excursions across North America. For more than a decade, Edwards – a Mercury pro angler for 20 years and counting – has been one of the most recognizable figures in outdoor television, now delivering some 400 hours of television per year and controlling 100 percent of the production. It’s a family operation, manned by Edwards, his wife, Rebecca, and a handful of employees, and it allows him not only to keep costs manageable, it also gives him tight control of content and quality. He believes it also has allowed him to stay competitive in a market that is continually getting more crowded.

Aside from the JEO broadcasts, he stays busy making about 60 appearances annually at trade shows, fishing tournaments and the like. He also sits on the board of the Lone Survivor Foundation, which helps wounded service members and their families through health, wellness and therapeutic support, and he actively participates in a number of other charitable organizations. He also donates a generous amount of time and support to those who are fighting the disease that nearly took him down.

“If there’s anything I love to do is to pay it forward. I love to lead by example by doing that,” he said. “When you lead with your heart like that a lot of good stuff can come out of it. God has taken the most difficult thing I could imagine and turned it into a positive.”

Though Edwards has generally enjoyed good health since beating cancer, he was recently presented a stark reminder of how fleeting it can be: He suffered a heart attack on May 23, attributable to the radiation and chemotherapy necessary to save his life back in 2005-06. As one would expect, it makes him savor every moment he has with his wife and their children, son Westin (7) and daughter Grace (4).