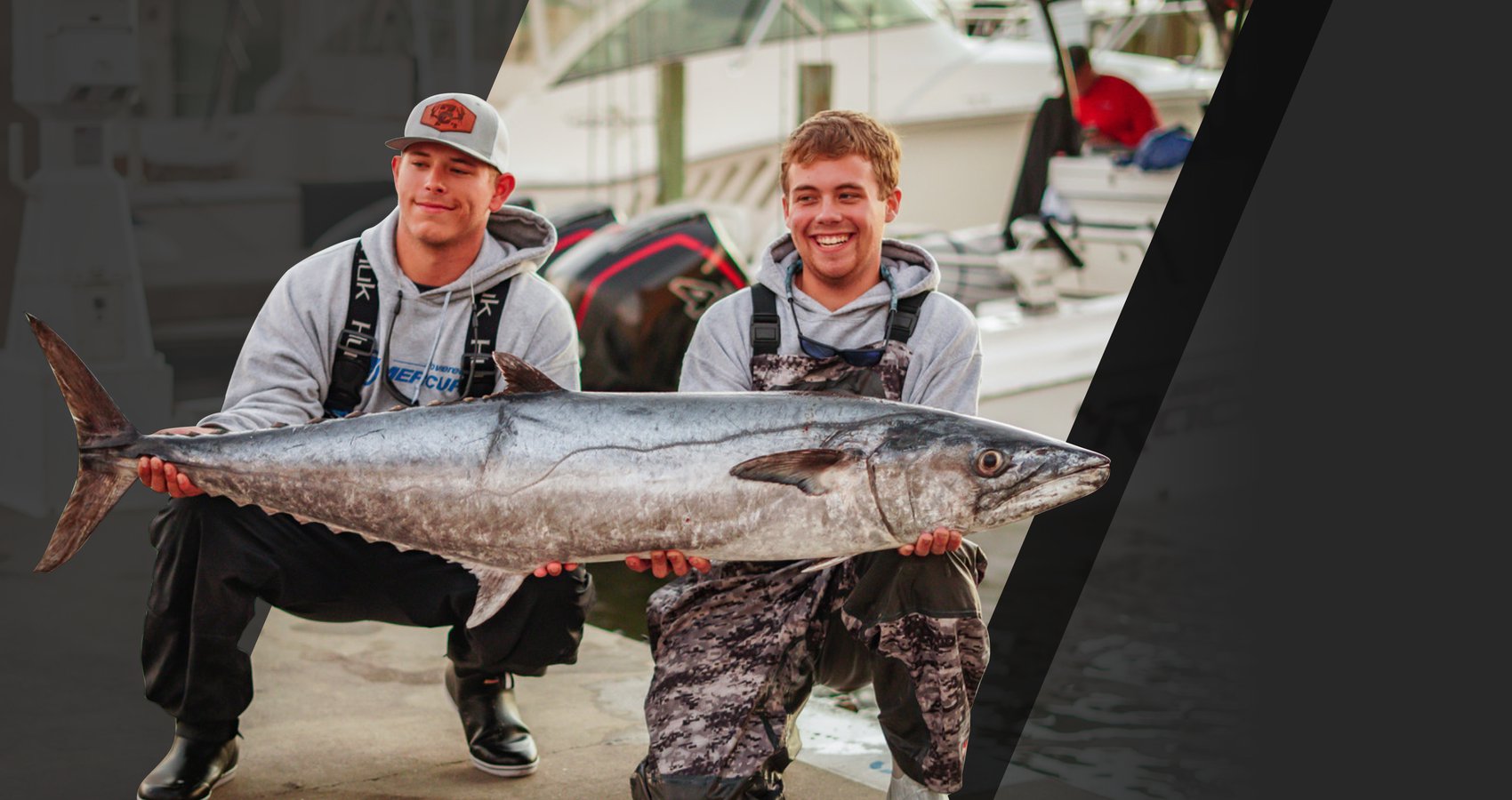 The well-respected waters off the shores of Biloxi did not disappoint, as there were multiple kingfish weighing more than 50 pounds brought to the scales during the November events. They included a Meat Mayhem tournament organization record 70.25-pound kingfish weighed in by Team Gotcha in the Open event on Nov. 20.

Team Gotcha, from St. Augustine, Florida, with the help of quad Mercury 450R outboards, made a 200-mile round trip to catch the record-breaking fish and knew it was a potential record when it hit the deck.

“Those 450R motors were able to get us out there in a hurry, allowing us to get to the spot first and catch that fish,” said team member Max Deloach. “We’re just all completely stoked about this, and we were speechless when it happened (landing the fish). We had no clue what to do. It’s the biggest kingfish I’ve ever seen.”

Brothers Ross, Zack and Chase Crabtree, along with their cousin, Will Perry, make up the Vamoose fishing team. Arriving on Monday morning of tournament week, they pre-fished through Wednesday, catching bait and putting together a game plan of where they would start. Running a 32-foot Yellowfin with twin 350hp Verado outboards, they had high hopes for the championship, knowing that the waters off Biloxi produce big fish.

Team Vamoose had a rough start to the tournament, weighing in a 45-pound kingfish during Thursday’s first round of competition. The family team made it happen on day two – held Saturday after a lay day – by bringing in a 66.5-pound kingfish to claim the victory.

“What a turnaround from Thursday,” said Zack Crabtree, “We left this morning (Saturday) and still went out after finding out Will had lost his grandad, which is basically our grandad, and we caught it for him.”

Despite fishing with a heavy heart, the family team rallied together, remaining positive and focused. They caught the big fish very early in the morning on the first bait they put out.

“We had a good feeling about the day though, heading out,” said Ross Crabtree. “It’s funny how things work. Will put out the first shotgun bait, and it wasn’t out there for more than 10 minutes before it started screaming. When the fish hit, we knew it was the one, so it was pretty cool. One bait, one fish.”

Seeing the size of the kingfish, the members of Team Vamoose knew they had a great shot at taking first place and couldn’t help but have a small celebration on the boat. However, knowing what Biloxi is capable of, they were still aware of the size fish their competitors would likely be catching.

“We knew there was going to be other big fish, so we couldn’t celebrate too much, you know,” said Perry. “We had heard that some other guys had big fish to weigh also and didn’t want to celebrate hard and then find out we weren’t first. But we came in, and ours was 66.5 pounds, and theirs was 64.”

2022 Season Just Around the Corner

All the teams that compete in Meat Mayhem tournament circuits and open events are looking forward to the 2022 season. Events kick off in January with leg one of the Pro Series in Key West.