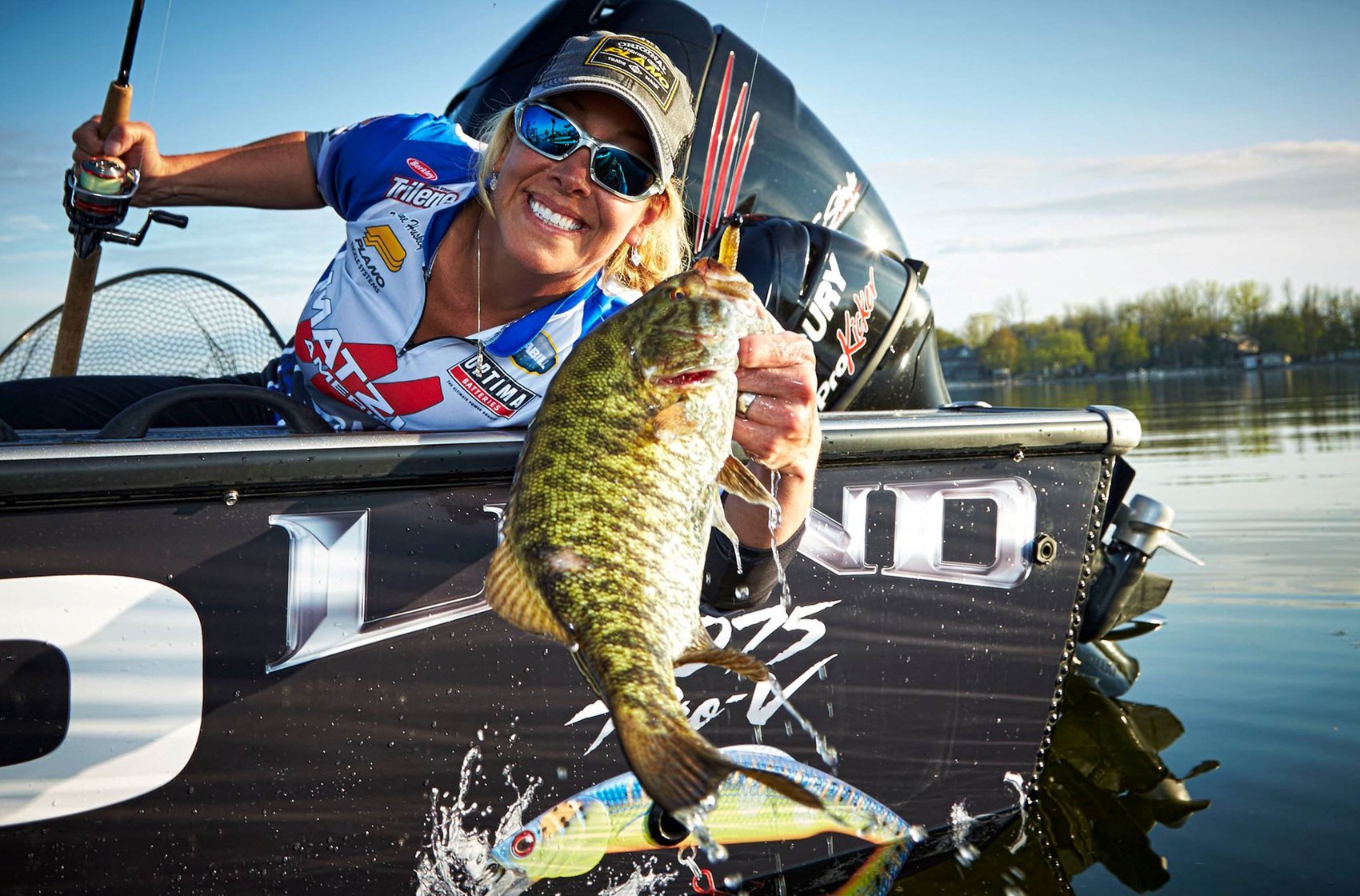 In celebration of International Women's Day on Sunday, March 8th, Mercury Marine is sharing the stories of a few women who have had profound impacts on the marine, angling and boating industries. We begin by introducing you to Marianne Huskey.

The story of Mercury pro angler Marianne Huskey is the stuff of movies – an idyllic youth, followed by heartbreak, tragedy and, ultimately, redemption and triumph.

But mostly it’s a story of perseverance, and what is possible when a talented and driven individual simply refuses to stay on the canvas.

Huskey was born in Detroit but moved at a young age with her family to Charlevoix, a small town in the northwest part of the lower Michigan peninsula. She was just 6 years old when her grandfather from Detroit, Anthony "Tony" Dunaski, retired in Charlevoix and bought a big Sea Ray boat intending to salmon fish on Lake Michigan. Little did Huskey know this would be an inflection point that would forever alter the course of her life.

“I had a love of the water since I was very young, and I was the oldest grandchild, so I was the first one to jump in the boat and go with him,” she said. “We tried to do some salmon fishing. He was a not very talented angler, but he did have a passion for it. We had much better luck while we were fishing for perch off of some sunken freighters. We’d anchor up there with a simple (night)crawler and a bobber and we’d have a great time.

“Having my grandfather so close to where I grew up was wonderful. We spent a lot of time on the water together.”

The World War II veteran – who’d helped liberate Paris, no less – enjoyed a long and happy retirement, and he continued to take his eldest granddaughter fishing at every opportunity. As time passed, the roles were reversed.

“When I got a little older, I bought my own boat, and I’d take him fishing with me, until he finally couldn’t go anymore,” Huskey said. Dunaski passed away in 2011.

But it’s a long way from being an enthusiastic youth fishing with granddad to becoming a world-class walleye angler, and there were no shortcuts for Huskey. 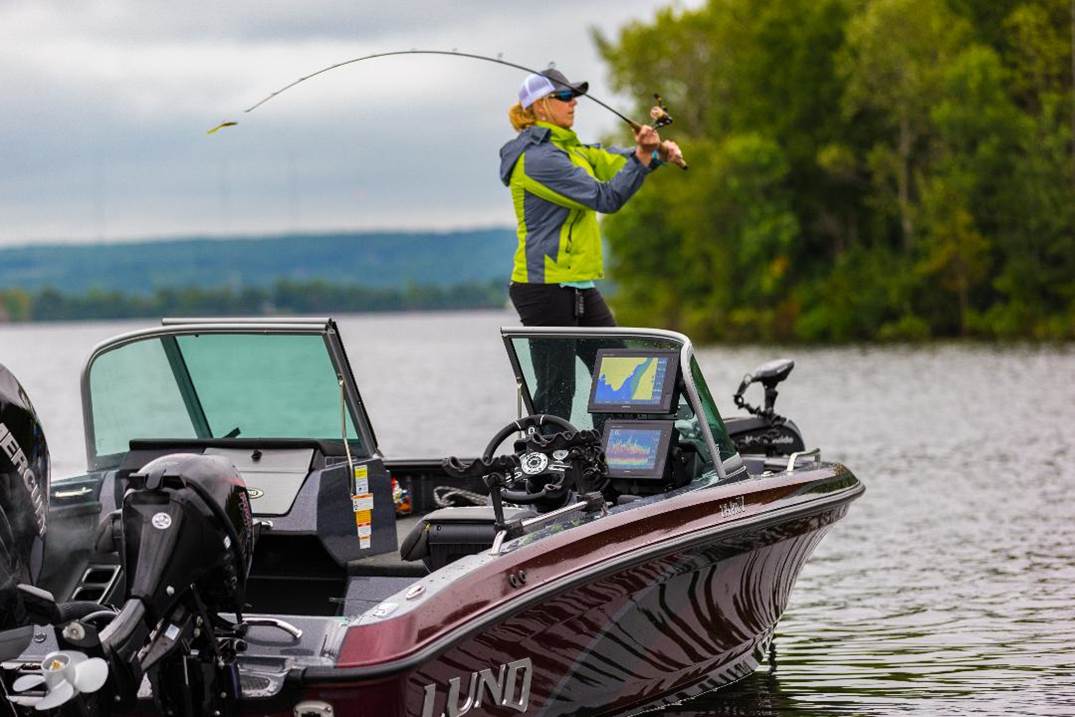 “It was the passion for the sport and a love of being on the water – a combination of the two,” Huskey said of her road to success, “because I don’t have any family members who are avid anglers or involved in competitive angling in any way, shape or form. When I was younger it was a way to spend time with family, and when I got older, I took to the rivers and streams and explored them on my own.”

As an adult she moved to the Upper Peninsula of Michigan for 13 years, and it was there she discovered ice fishing and the toothy species that would be her true calling.

“I started doing some ice fishing and caught my first walleye,” she said. “After I bought my first boat, I found out there were small side tournaments and bar tournaments and I started competing in those. And just like that I was addicted. I started keeping notes and keeping track of dates, times, water clarity, temperature. It almost became an obsession.”

Huskey competed as often as possible and was enjoying success at the grassroots level – professional anglers she knew urged her to take the next step.

“They said ‘Don’t waste your time, you’re ready to make the jump.’ And I did,” she said.

That was in 2009. She was competing in an elite professional tour – often as the only woman in the field – and learning the ropes. But this wouldn’t be a Hollywood story if Huskey took a straight path to victory, and she didn’t. The week after her first professional tournament her husband, Tom Huskey, died suddenly in an accident.

“At that point your whole world ends,” she said. “You’re at a standstill. You don’t even know which way is up. The only reason I continued, honestly, was the outreach I received from the companies I was affiliated with for that short period of time, and the small group of professional anglers I knew. They reached out and said ‘Marianne, you need to keep going because this is what will get you through it. The time on the water doing what you love is going to help you get through this.’ And they were right.” 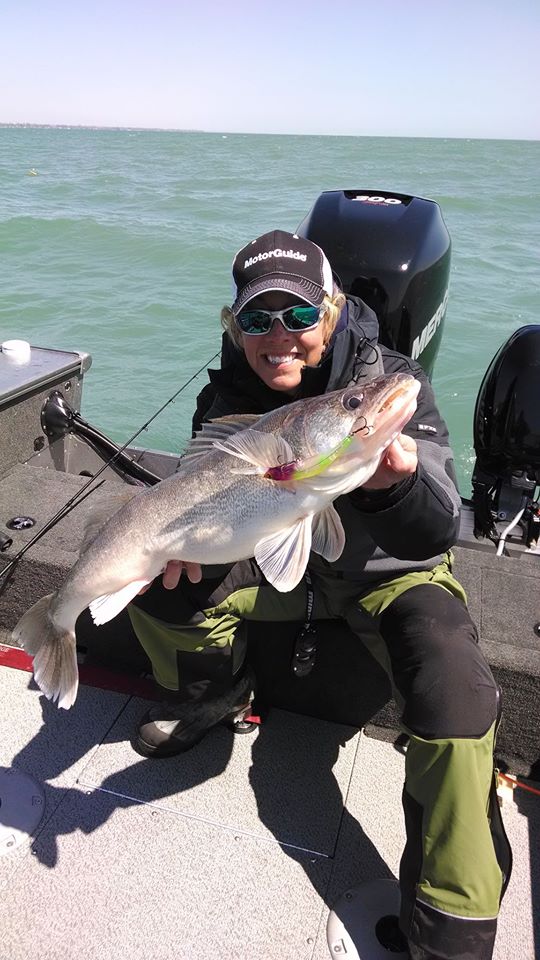 She cried all the way to the next tournament, she said, not even knowing how she got there. Understandably, she did not perform well and was still exhausted and stressed to the breaking point. But she did fish and compete. It was the first step toward finding some sense of normalcy and peace after experiencing the lowest point of her life.

Her fellow competitors saw and appreciated how she pressed on and worked through a brutal rookie learning curve while dealing with a profound personal loss. By a vote of her peers, she was named 2010 Sportsman of the Year for the National Professional Anglers Association.

By 2012, the rookie jitters were gone and Huskey was primed for a breakout season. The first event of the AIM Pro Walleye Tour took place on the St. Marys River, which connects Lake Superior and Lake Huron. It was a homecoming for her, and just what she needed to start her year.

“I spent 13 years on that body of water, and that’s where it all started for me with walleye,” Huskey said. “So, I had a lot of history there, which was extremely helpful. It worked out that I finished in second place, so I started the year off really well.

“And when you come out of the gate in the top five, it’s an adrenaline rush and your whole year changes. You can lose the Angler of the Year in your very first tournament. You can’t win it, but you can sure as heck lose it. But I was off to a really good start.”

The AOY race would come down to the last tournament of the year, on Lake of the Woods in the far north tip of Minnesota. She was in the hunt but needed a strong finish to have a real shot at the crown. Then the Hollywood script took over when the first day of the tournament was scrubbed due to weather. The field was able to fish the second day, and Huskey had a decent showing.

On the third and final day, the very first fish she hooked was over 10 pounds. Suddenly the trophy seemed a whole lot closer. That is, until she made a snap decision to hold onto the rod and let her amateur co-angler – it was a pro-am event – man the net. To her horror, he missed and knocked the fish off the lure.

“I swear at that moment I saw the Angler of the Year swim away with that fish,” she said. “It was a horrible moment and I was so upset. I said more than a few choice words.”

The rest of the day was frustratingly ho-hum – until the very last fish. Another 10-plus pounder. This time she handed her rod to the co-angler, not even telling him the size of the fish, and grabbed the net. She boated the fish and returned to the weigh-in with hope and a legitimate shot. 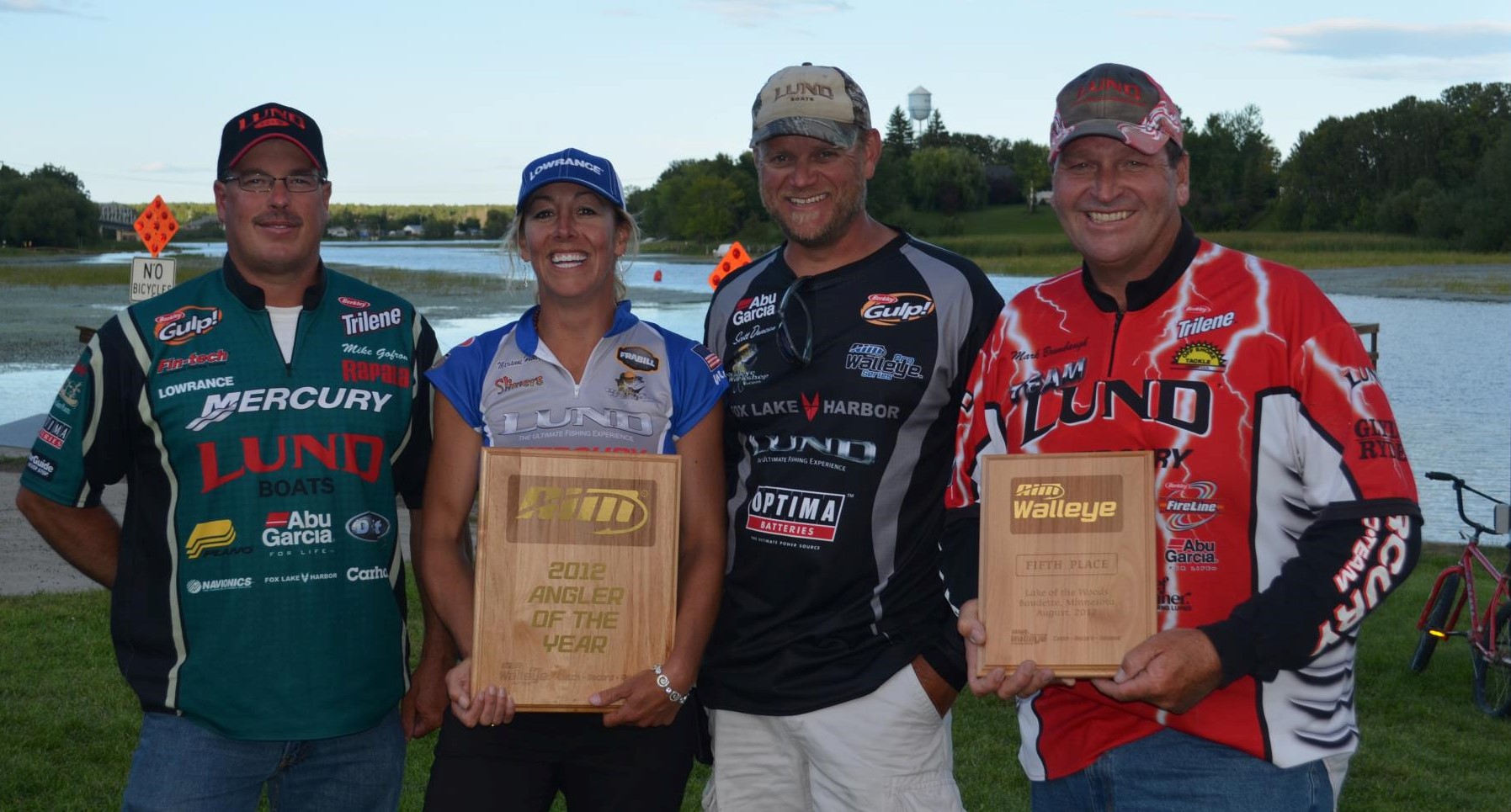 After an agonizing delay while the results were tabulated and verified, she was announced as the 2012 AIM Angler of the Year. It was Aug. 18, her grandfather’s birthday.

“It was like everything had come full circle,” Huskey said. “It was an incredibly emotional moment after all I’d been through.”

To date, she remains the only woman to win an Angler of the Year title in any major professional walleye or bass fishing series open to both men and women.

Today Huskey lives in Green Bay, Wisconsin, and is remarried to Matthew Pikka, an engineer who fishes but not competitively. The couple loves to travel and is planning a tour of the Scandinavian countries in 2021. Her son, Gunnar Huskey, is 27 and lives in California.

Marianne Huskey is the chief operating officer of a construction company and still a giant in professional walleye angling. She will fish all four events on the National Walleye Tour in 2020 and a handful of other events. Her tournament rig is a 2020 Lund 2175 Pro V powered by a Mercury 400hp Verado outboard. 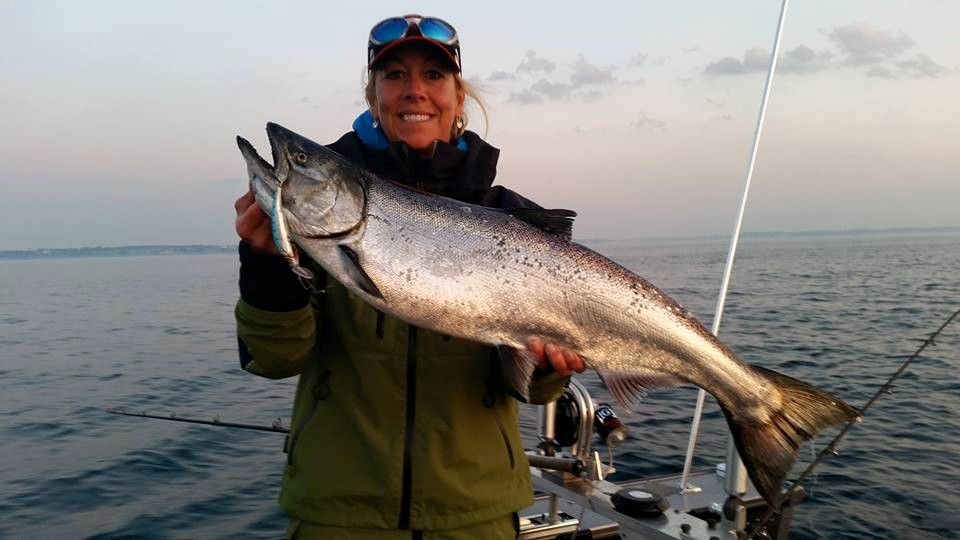 Huskey is also a popular keynote speaker at large regional outdoor shows and is slated for four such engagements this year. She’s passionate about teaching and encouraging the next generation of anglers as well, having served six years as the director of youth clinics for the National Professional Anglers Association. Each July Fourth she hosts a youth tournament in Green Bay that draws 25-50 participants annually.

“I not only talk to the kids, I’m talking to the parents about getting their kids on the water or in the woods at every single seminar,” she said. “I tell them “Nothing that you do is the wrong way, it’s okay to try new things and it’s okay to make mistakes.

Sarah Lovel has come a long way since the days when her parents would attach a tow-rope to her life jacket, throw her behind the boat and pull her around Puget Sound, telling her she was water skiing. “As far ...