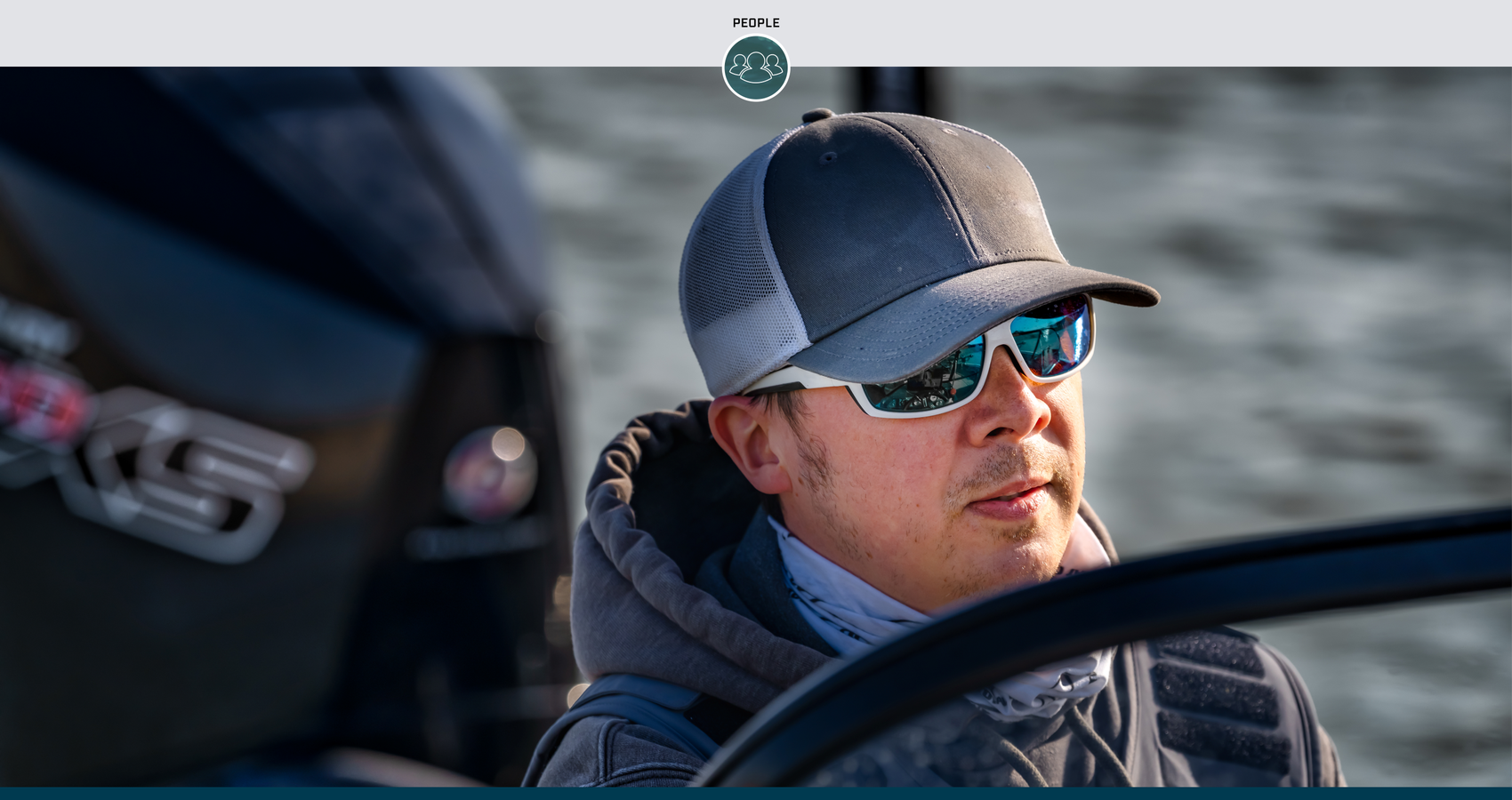 Two years ago, in the midst of a pandemic, Mercury Pro Team member Tom Huynh entered his first walleye tournament on a whim with friend and campground neighbor Nate Wolske. While Huynh considers many traditional walleye methods to be monotonous, the competitive fire burned, and this Anglers Insight Marketing (AIM®) Weekend Walleye Series Minnesota Division event on Leech Lake represented an opportunity to try something new. Fast forward to 2022 and Huynh is now widely considered the hottest professional walleye angler in the sport. While Huynh’s success in such a short time frame is astounding, his journey to the sport’s summit is even more perplexing.

For starters, the 42-year-old grew up not in the heart of walleye country in North Dakota, Minnesota or Wisconsin, but in Charlotte, Arkansas, where his family operated a small cattle farm. As a child, he fished for catfish, panfish and an occasional bass. It was catching those bass that first piqued his interest.

“We did have little largemouth bass in our clay-colored farm ponds,” recalled Huynh. “I would walk the bank and work the edges with a Mepps® spinner. The older I got, the more I wanted to bass fish. It was more intriguing to me – working a bait instead of just sitting and waiting for a catfish to come to me. Growing up, we didn’t have much for TV, but the few channels we could get had fishing shows on weekend mornings, including bass tournaments.”

In 1999, after two years at Arkansas State, Huynh moved to the Fargo-Moorhead area on the North Dakota-Minnesota border to study computer information systems at Minnesota State University Moorhead. To help fund his education, he took a job in a nail salon. While Huynh finished college and earned his degree, he discovered a true talent with nail art. Today, Huynh owns and operates two Polished Nail Spa locations in Fargo, where he employs 27 nail technicians.

With his businesses established and profitable, Huynh eventually returned to his passion. In 2015, at 35 years old, he purchased his first boat. Shortly after, he was scratching his competitive itch on the Bassmaster Opens. It wasn’t until the pandemic caused a complete schedule makeover that the Moorhead, Minnesota, angler was forced to explore other options closer to home.

“Before that first AIM tournament on Leech Lake, I don’t even think I had ever caught a limit of walleyes,” he said. “I remember we grabbed one of two spots left in the tournament. With three days of practice, we just went looking for big fish. We ended up catching seven or eight in the tournament, and our five biggest weighed just shy of 40 pounds.”

His first win was labeled beginner’s luck, but a month later Huynh and Wolske took fourth place at the AIM event on Lake Winnibigoshish. That September, at the Masters Walleye Circuit (MWC) event on Cass Lake, Huynh and Wolske won again – setting a lake record with 37 pounds over two days.

By this point, the two newbies were turning heads, but their success was just beginning. After finishing just 38th at the 2021 AIM Minnesota Division season-opener, the duo took sixth on Mille Lacs and then won again at the Leech Lake event.

After a solid, but unspectacular 23rd-place finish at the St. Louis River event, the season concluded with the Mercury Marine Minnesota State Championship on Lake of the Woods. While it’s beginning to sound like a broken record, Huynh and Wolske won again. More precisely, they accumulated 88.62 pounds and won the two-day tournament by more than 35 pounds, setting records for overall weight and margin of victory. While massive Lake of the Woods is known as a troller’s paradise, Huynh refused to troll, even in 6- and 7-foot waves. Fishing from the bow, Huynh continued casting and reading his forward-facing sonar even as the wind churned and the swells tossed him around.

“Not only did we win the championship, our margin of victory allowed us to win Team of the Year. I can promise you I had a rod in hand the whole time,” Huynh said. “That one really put everybody on notice as far as how we fish.”

If you thought the hot streak was over, think again. In mid-April, Huynh and Wolske won the 2022 AIM Minnesota Division season-opener on the Mississippi River, even though Huynh considers rivers to be his angling weakness. Most notable was that they won the tournament pitching a soft-plastic crawfish lure on shallow riprap – a classic bass fishing pattern. In early June, they won the AIM National Championship Shootout on Lake Miltona with another unconventional and bass-related strategy: fishing docks.

Altogether, Huynh and Wolske have notched four AIM wins out of their past six events fished. Up next for Huynh is the NWT event on Green Bay and then another AIM visit to Leech Lake, where he and Wolske will attempt to accomplish the three-peat.

When discussing his success, Huynh is humble and somewhat reticent.

“I want to give credit to Nate,” emphasized Huynh. “Typically, we both prefish separately. He prefishes out of his boat, and I prefish out of mine. I’m the point person, but I trust him 100 percent. If he’s found bigger, more consistent fish, I have no hesitation to go with his program. Mille Lacs, for example, was all him. Nate’s also the master of boat control. While I’m up on the bow reading the electronics, he’s keeping us steady. Our strengths really complement each other.”

Wolske, who owns and operates Wolske RV, a sales and service business out of Boy River, Minnesota, has seemingly bought into Huynh’s unique approach.

“He’s like me in that he just started tournament fishing a couple years ago, but he’s learning so fast,” Huynh explained. “We want to win every tournament. That means I’m always looking for structure that holds the biggest fish. Overall, I think I just approach things differently. I know the techniques traditional walleye fishermen use, and I’m just using variations of things that have been around a long time. I’m proving, mainly to myself, that the way I like to fish can be done anywhere.”

Huynh believes his lack of experience is actually helping him. The skills and techniques he has refined are truly his own.

“I never stepped into a boat until seven years ago. I learned everything on my own, from launching and taking care of a boat, to learning techniques and understanding electronics. At the time I didn’t think anything of it, but I now think that’s part of why I’m doing well. I had to rely on myself. I think that’s part of what sets me apart.”

Huynh currently runs a NITRO® ZV20 powered by a Mercury 300hp Pro XS® outboard. While walleyes are in his immediate future, Huynh is still open to downsizing his deep-V vessel and returning to bass fishing with one goal in mind.

Like a lot of young ladies, 12-year-old Maggie Plautz has a lot on her plate. For much of the year the rising eighth-grader from Lake Mills, Wisconsin, has dance classes up to six days a week, and, in season, also ...