Angler Fitness: How To Improve a Hookset

Enjoy the best part of fishing even more.

That is a standard piece of advice proffered to new anglers, essentially telling them if there is any chance a fish is biting, then to set the hook. For the most part, it's good advice for beginners learning the difference between a bite and the lure hanging on grass or the bottom.

Hooksets may indeed be free, but they are not all equal. The proper hookset technique, combined with the optimal amount of force, is built over time.

"Hooksets are the best part of fishing, and if you don't enjoy them, I don't know why you fish."

It's a bold statement, but for the majority of anglers, it is 100% true. Setting the hook and beginning the fight is when adrenaline kicks in. In addition to being fun, a solid hookset and subsequent tension on the fish is critical to landing it.

The Keys to a Good Hookset

When strengthening the hookset, Hanks encouraged the use of resistance bands. He demonstrated the exercises on his boat's front deck, but they can be performed just about anywhere.

The key muscle groups in a hookset are the biceps, shoulders, chest, and core. Hanks recommends the following three exercises for improving the physical part of a hookset and the subsequent tension needed to land a fish. 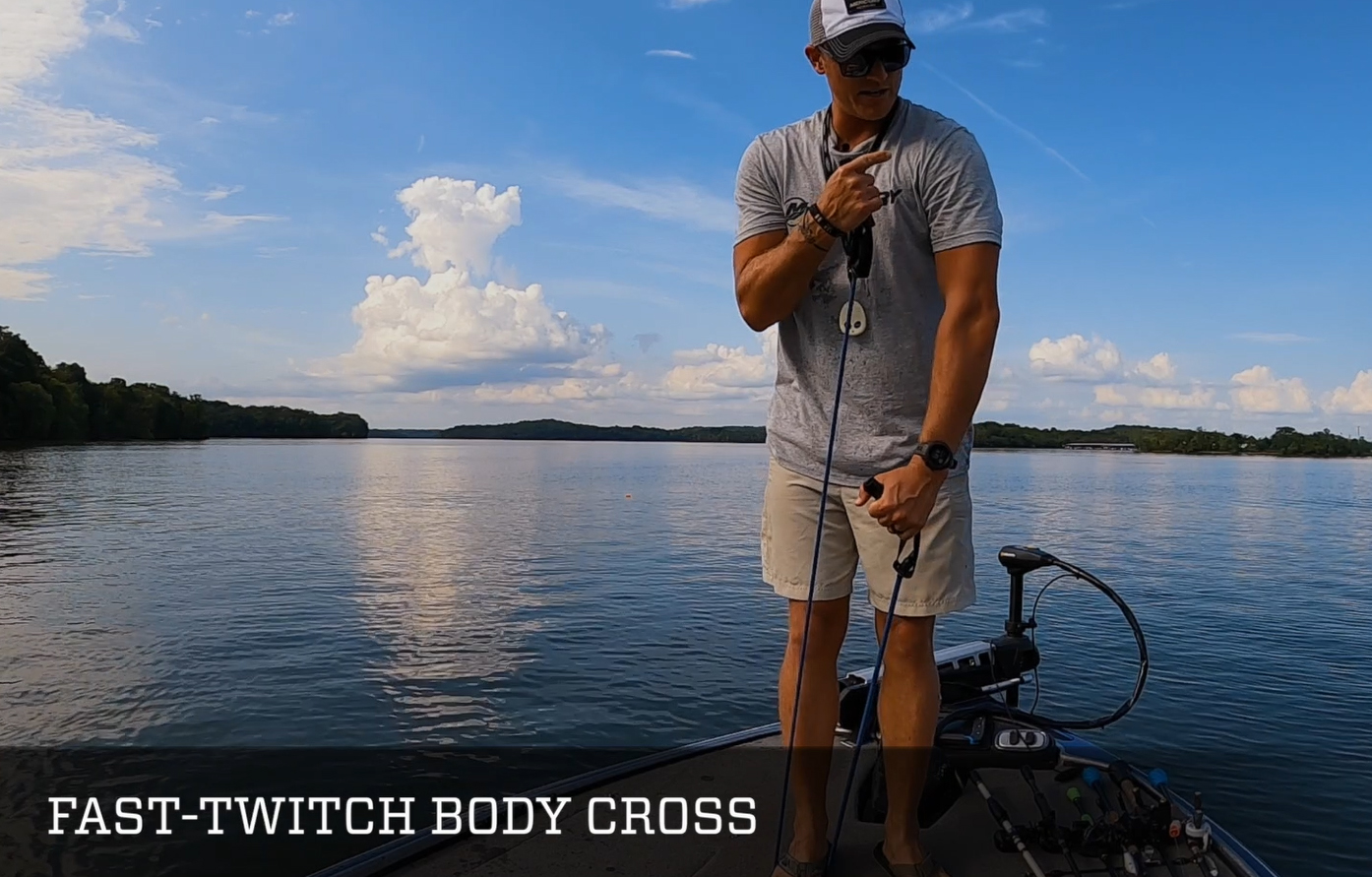 Place the resistance band under the feet with both hands resting at the side. Explode upwards and then slowly lower each arm back to the resting position. This exercise works mainly the biceps.

Place the resistance band under the right foot with both hands resting at the side. Explode upwards and across with the left hand across the body and then slowly lower the arm back to the resting position. Repeat with the opposite side of the body. This exercise works the shoulders. 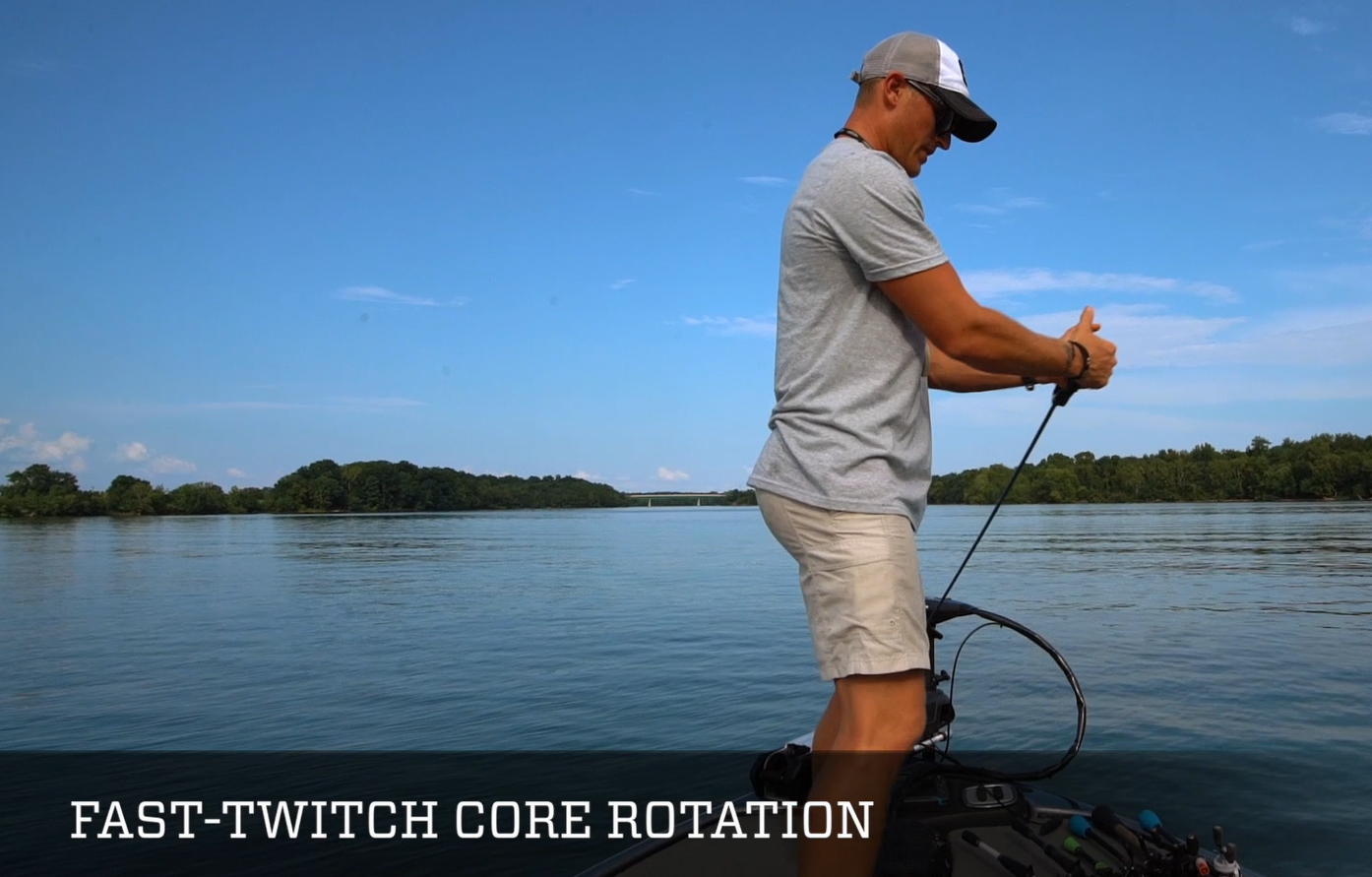 Place the resistance band on a doorknob or the trolling motor in the boat and extend both arms out in front of the body. Explode in the opposite direction doorknob and then slowly return it to the resting position. Repeat with the opposite side of the body. This exercise works the core, chest, shoulders, and biceps.

For all these exercises, Hanks recommends ten sets of one perfect repetition.

“Concentrate on doing the exercises perfectly each time. One “perfect rep” completed ten times keeps our mind concentrated on what we are doing.

"The key with all these exercises is to explode up quickly and then control the bands down," said Hanks. “It's also known as time under tension.

"I encourage people to work on both sides of their body with these exercises. Sometimes on the water, we are not in a position to set the hook with the same motion every time. The best anglers can set the hook well on the left side of their body and their right.

"Look at your hooksets to see just how different they are between setting the hook across your body versus on your non-dominant side. They're probably a good bit different. The non-dominant side probably needs a lot of practice and a lot of strengthening. Consistently strengthening the muscles involved in the hookset will improve the hook-up ratio. The time under tension portion of these exercises will help keep endurance up while fighting the fish."

Mercury Pro John Crews of Salem, Virginia, is well-known in fishing circles for being in top physical shape. He physically looks as ready to wrestle in the Olympics as much as he does to fish a Bassmaster tournament.

"Working out helps me not to be mentally tired all day since I am not physically tired. The act of the hookset is all about your mind trying to control your adrenaline. In my opinion, a stronger hookset is not as important as keeping the rod fully-loaded or flexed throughout the fight of the fish. People get out of position on hooksets, and that allows the rod to be less than fully loaded. That is when fish come off.

"Another piece of advice is to make sure and reel up the slack before you set the hook. That is far-and-away the biggest mistake I see people make."

Hanks agreed. "An angler can have the strongest hookset in the world, but if they are either worn out or get lazy and don't reel up the slack on the fish, they won't succeed. Time under tension is so critical here. Development of fast-twitch muscles using the resistance bands and building up endurance to keep the pressure on the fish are the goals with these exercises.

Angler Fitness: Get Your Legs Fishing Fit with Tom Rowland

Sea Legs – some people have them, some people don’t. Of course, having sea legs has much to do with balance but it also has to do with strength in your legs. With a boat constantly rolling back and forth, ...

Angler Fitness: The Importance of Stretching and Strengthening

Fishing is enjoyable at any age. While some people may take their fishing trips a little more seriously than others, a day on the water is best spent when both mental and physical stress stay behind at the dock. An ...

Creating the illusion of a feeding frenzy behind your boat is crucial for successful offshore trolling. Done properly, pelagic species such as billfish, mahi, tuna and wahoo will rise up behind the transom, looking for an easy meal. OUTBOARDS FIRST! ...