In recognition of International Women’s Day 2019, Mercury Marine provides the following glimpse into the life of Betty Bauman, a strong and remarkably determined woman who has made a positive impact on the lives of many. 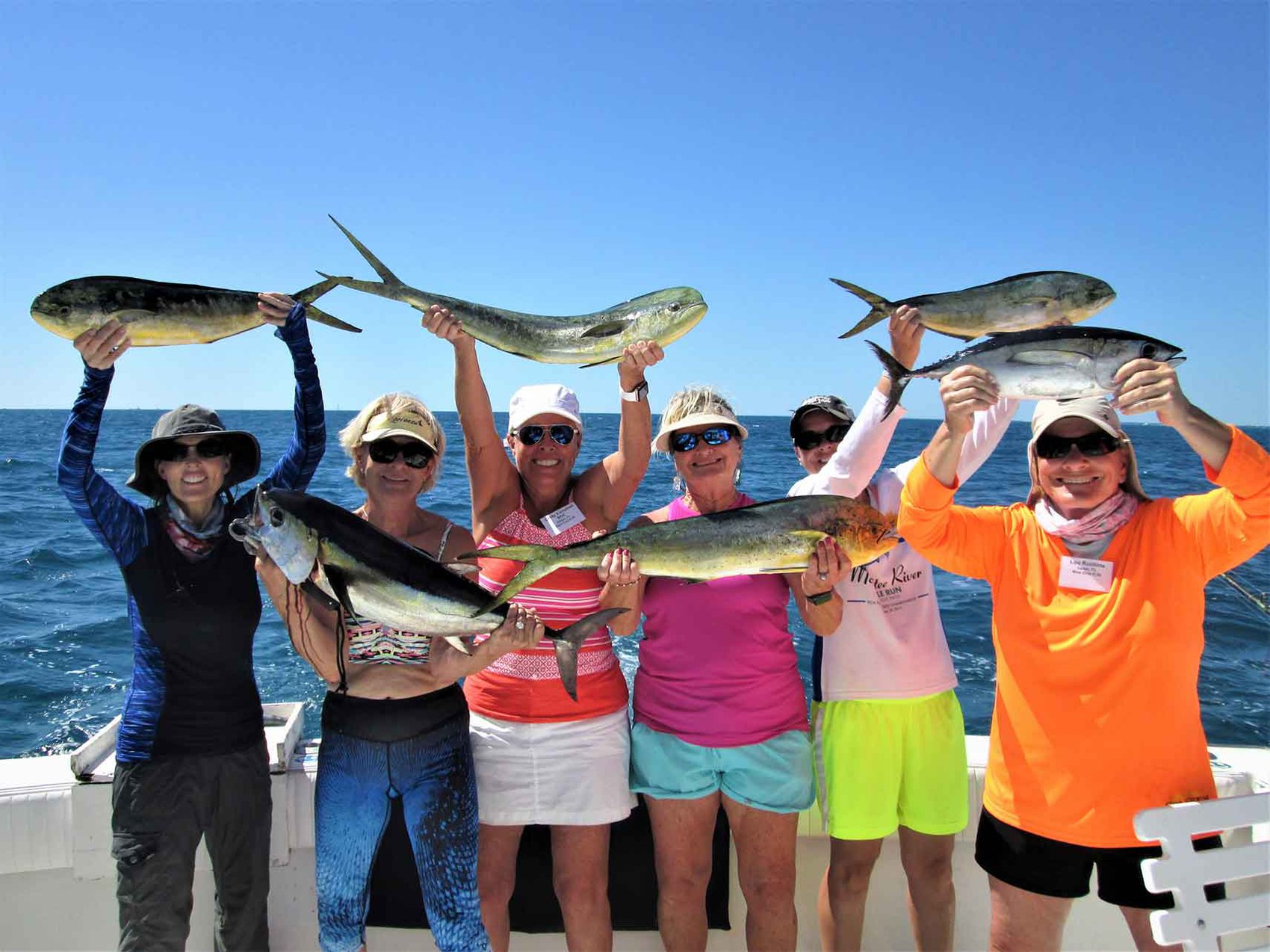 Betty Bauman of South Florida uttered the following three lines while retelling three memorable on-water adventures. Try to guess what her job has been the past 22 years.

“ We had 12-foot seas with the wind so strong it would blow your sandwich out of your hand.”

“I fell overboard at night in a crazy fast current while reaching out too far to catch shrimp.”

Her vocation? Teaching other women how to fish.

Early in her adult life, Bauman occasionally fished with her husband, a tournament angler, but it was semi-miserable for everyone because she didn’t really know what she was doing and he didn’t really know how to calmly teach her. The dilemma made Bauman wonder if other would-be female anglers faced similar frustrations.

Bauman had grown up in Pennsylvania fishing with a stick and a line – her older brother always had first rights on the family fishing rod – but she understood the basics. Later, determined to learn everything about fishing, she studied hard until she not only knew how to fish, she became qualified to teach others.

In 1997, she founded Ladies, Let’s Go Fishing, a seminar-based program for women that provides fishing lessons, information and on-water experiences in what she also calls “The No-Yelling School of Fishing.”

Bauman shares her knowledge and passion for fishing and conservation with other women – 8,000 of them so far, and she’s not done yet.

Her success earned Bauman accolades from contemporaries and the media. BoatU.S. Magazine called Bauman one of “The Top Women in American Boating,” and she was named Woman of the Year in the nation’s sportfishing industry by the American Sportfishing Association. More recently she was listed among Boating Industry magazine’s Top 21 Most Influential Marine Industry Leaders in the 21st Century.

But what about the sandwich?

. . . some clarification on the three Bauman stories mentioned in the opening paragraph of this article.

Story No. 1: Lunch on a boat gone bad

“I’ve been fishing in 12-foot seas with the wind so strong it would blow your sandwich out of your hand before you could eat it. And I once lost a sailfish worth more than $30,000 in a tournament – it pulled the hook.”

“My job was to hold the line and pull the boat over to the dock (once it was launched). The boat came off the trailer fast and I couldn’t hang on to the line. I was going to swim to it until I saw the alligators. There was nobody around to help. When my husband came back from parking the truck, there was some yelling as I sheepishly watched the boat float away in the fog.”

“I fell overboard at night in a crazy fast current while reaching out too far to catch shrimp. It was a cold night and with the weight of my soaked fleece I was scared, especially with only two people left on the boat – one with a broken arm in a sling – as the current whisked me away in the dark. They got me, my six-foot net still in hand with the shrimp in it! I changed into dry clothes and we continued shrimping.”

When Bauman opened her fishing school for women, she had plenty of experience in the marine industry, including time spent with celebrities.

“I had a marketing position at Wellcraft Marine and I needed to learn saltwater fishing,” she said. “Wellcraft sent me on my first offshore fishing experience to fish a tournament with Gary Dunn and (NFL Hall of Famer) “Iron” Mike Webster of the Pittsburgh Steelers. I became hooked on offshore fishing and also wanted to learn about inshore fishing so I could catch fish where I lived in Longboat Key, Florida. I bought a fishing boat but had no clue how to even tie on a hook, so I tried knots I used to tie up horses. Still, I caught fish”

Her Wellcraft position was followed by stints with Donzi and Aquasport boat companies before Bauman put to work her bachelor’s degree in communications and opened her own public relations firm. She also produced publications for offshore tournaments, which is where she met her future husband, a successful tournament angler at the time.

“When he took me fishing, I absorbed as much as I could,” she said. “I wanted to practice the skills before fishing; in the heat of the moment there’s little time for instruction.”

The birth of change

Those were the days and experiences that prompted the creation of Ladies Let’s Go Fishing.

“I felt there were millions of women who wanted to fish but felt inadequate,” she said. “The solution was a program for women to learn, practice and test their skills on the water in a non-intimidating environment. This required sponsors, and we were fortunate to engage those that wanted to build a future for the sport.”

Mercury Marine has been the official engine sponsor of Ladies Let’s Go Fishing since its earliest days and continues to support Bauman’s efforts.

After two decades of teaching others, Bauman said the names and faces have changed a bit, but the people and their motivations remain constant.

“Their reasons for coming to us have stood the test of time,” said Bauman. “We’ve always attracted women from diverse backgrounds, ages and income; when they attend, they are all the same in their quest for knowledge. I love fishing with women because they get so excited upon catching or releasing fish!

“And our teaching methods based on research from our initial offerings are still what people want. Ladies, Let’s Go Fishing offers hands-on training, face to face, plus a chance to fish from charter boats. That’s something you can’t get online.”

While Bauman loves to teach, she might love to fish even more.

“I like fish that show action on the surface versus bottom fishing – fish that leap, such as sailfish, tarpon, mahi, snook, salmon and trout,” she said.

“Catching big fish can be exhilarating and/or exhausting, depending on the line test and fish species. A 50-pound sailfish or even a 100-pound marlin are easier to fight than a 50-pound tuna or shark due to the way the fish behaves. I caught a 60-pound mahi on 30-pound test with a spinning reel. The fish didn’t even know it was hooked . . . only a 15-minute fight. The line broke upon gaffing, but I got it.”

But not everything on the boat works out as planned in the classroom.

“If a shark eats your fish, you could suddenly find yourself fighting a 100-pound fish with tremendous strength,” she said. “We teach women how to leverage their hips and back to fight a fish to save arm stress, plus how to hook a vest to your reel to make the fight easier. Once it’s in the boat or released, it’s a sky-high feeling!”

When it comes to excitement, said Bauman, fishermen and fisherwomen are the same.

“I like the strike the best. That’s when the excitement begins,” she said. “The fight is the challenge when things can happen unexpectedly, no matter the level of skill. If the fish goes under the boat or gets wrapped on a buoy, things can get hairy. Multiple hookups can cause pandemonium. Getting the fish on the boat is the crowning touch.”

Bauman is a huge believer in catch-and-release fishing. Still, every once in a while, a tasty grouper or mahi makes its way back to her kitchen.

”While I like to bring home fish to eat, I release what should be released for conservation purposes,” she said. “We teach ladies to limit their catch, not catch their limit – meaning ‘don’t fill your freezer.’ Catch what you can eat and release the rest – plus, we teach the proper way to release fish so they will survive. There are many ladies like me who like to cook the fish we catch. These fish are fresher than what’s in the store, and fish is part of a healthy diet.”

Few of her 8,000 graduates have faded into the distance never to be seen again. Many stay in touch.

“So many have said that Ladies, Let’s Go Fishing opened a new world to them,” said Bauman. “I have had ladies who took the course years ago who now have important positions in the fishing industry have become charter captains or who send me photos of their fishing adventures all around the world.”

You have to wonder how many have had their sandwich blown out of their hands or had to swim gator-infested waters in pursuit of a runaway boat.