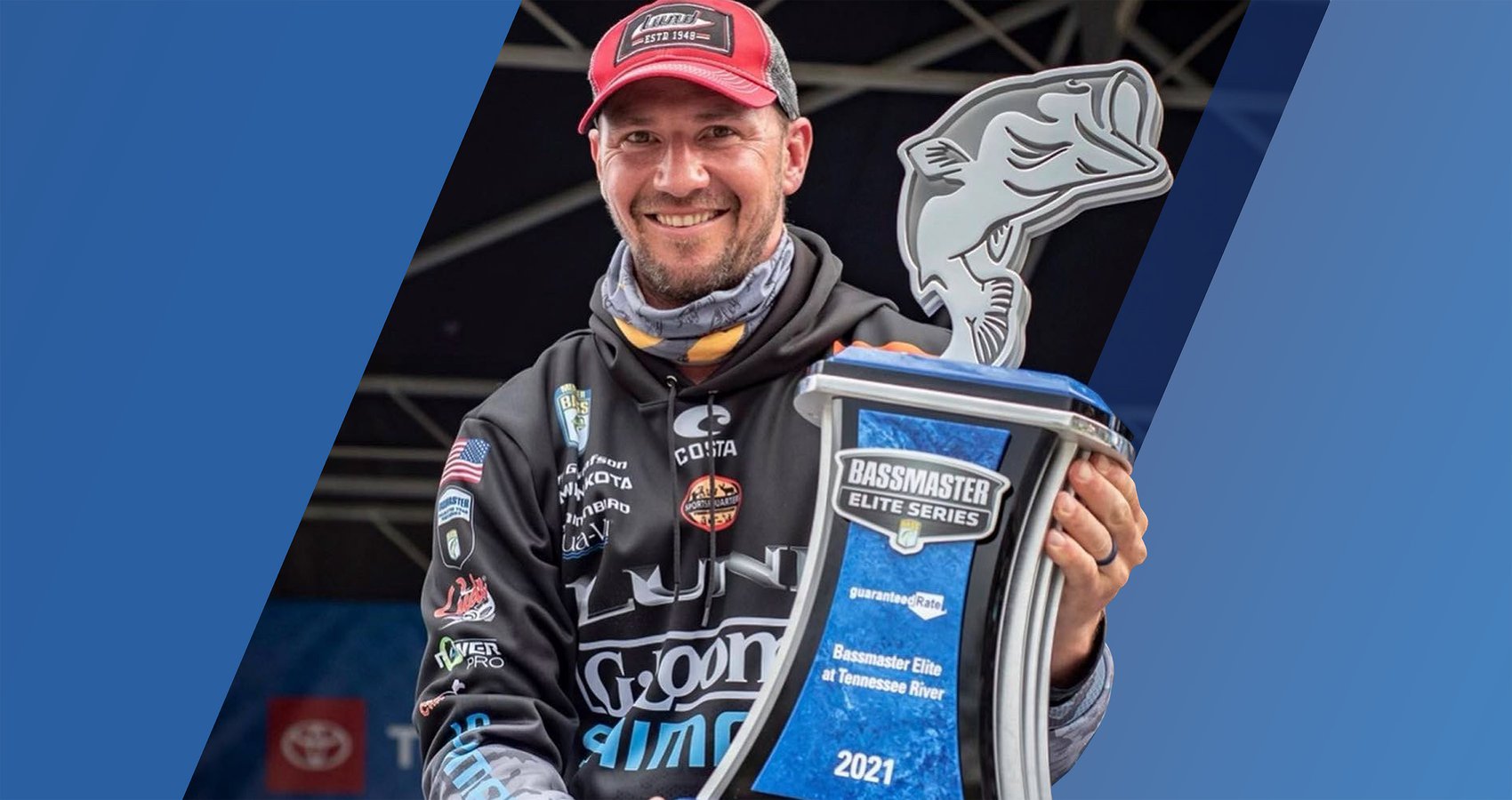 Mercury-powered pros grabbed the top three spots on the podium and eight of the top 10 positions in the finals. 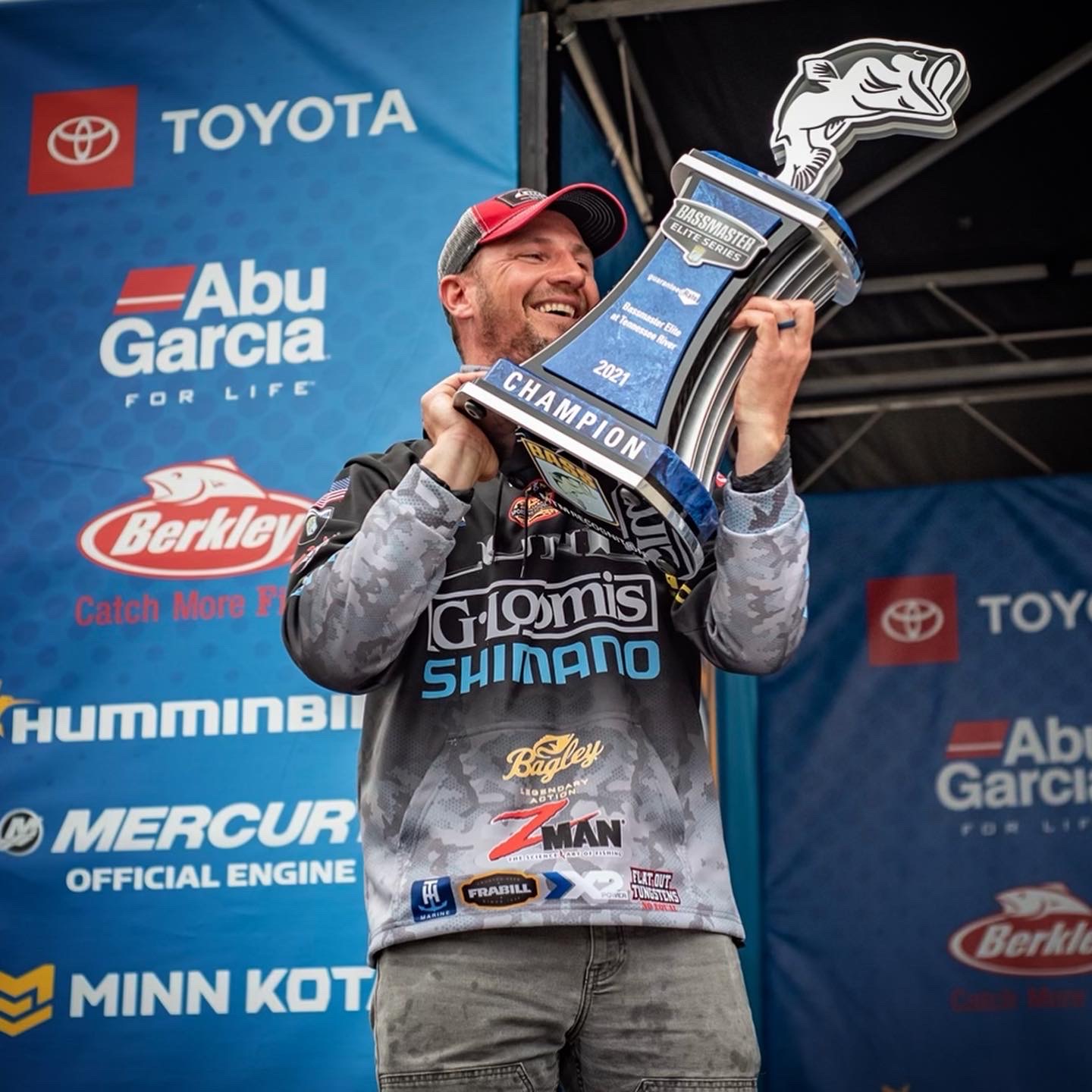 With a coveted blue Elite Series trophy in hand, Gustafson reflected on all of the people who helped him reach his lifelong dream of scoring an Elite Series win.

“My dad took me fishing every chance I wanted to go when I was a kid, and I just caught the bug for it,” he said. “This is my whole life, doing this stuff. It means everything to me. I think about a lot of people that I did it for; my family and I have a lot of good buddies at home that have the talent to do this and just have taken a different direction in their lives.

“They all really support me and send me messages all the time, [whether I’m doing] good or bad. I can’t wait to show them all this trophy.”

Gustafson maintained a steady backlog of a thousand unread text messages during most of the event.

“After the second day, I was replying to messages one by one and looked up and realized it was 11:30 p.m. and I needed to go to bed. Once I get back home, I’ll try and get to all of them,” he said.

But first, Gustafson faced his customary long drive home. His hometown of Keewatin sits in the far western portion of Ontario, a three-hour drive from his border crossing spot in International Falls, Minnesota. Knoxville to Keewatin is right at 1,300 miles, and with a border crossing mixed in, it’s roughly 21 hours of travel.

Due to enhanced border restrictions, Gustafson’s wife and family were unable to travel to Tennessee, which – coupled with the fact that he had been on the road for five weeks – gave him all the more motivation to get home as quickly as possible. He knocked out nine hours of the drive immediately after the weigh-in, with the trophy buckled safely in the passenger seat. He got some rest at a friend’s house, and hit the road again so he could get to the border before his negative COVID test expired.

Gustafson had to quarantine for 14 days twice on two separate occasions during the 2020 season following border crossings returning from Bassmaster events.

“The wrapped boat and truck of a bass pro may look glamorous, but the time away from home and time driving is not for everybody,” he said. 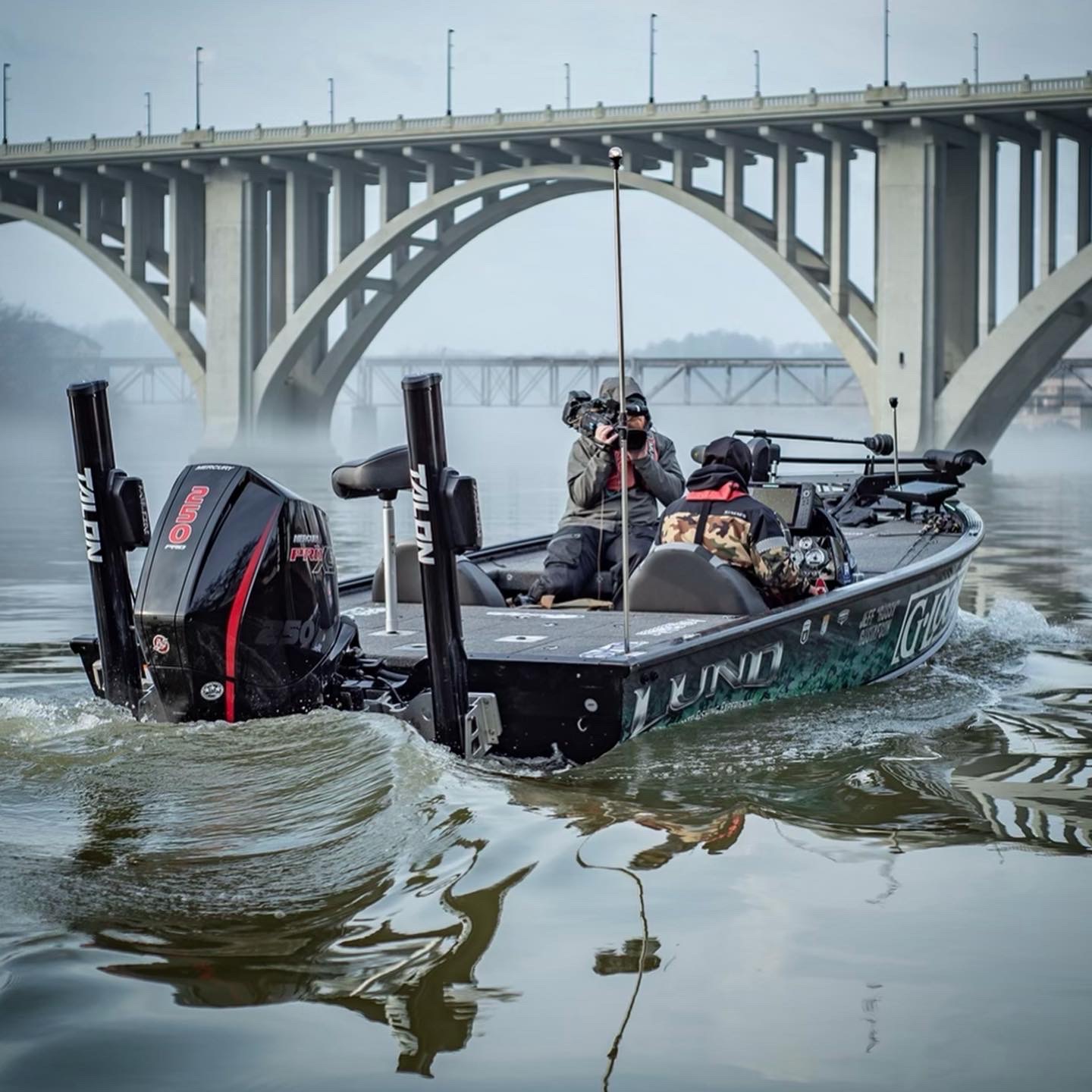 In a tournament where largemouth played for most of the field, all 20 of Gustafson’s bass were smallmouth, something he didn’t expect heading into the event. Nor did any of the prognosticators.

“In my experience on the Tennessee River lakes, if you catch a smallmouth, it's sort of a random fluke,” he said. “With the 18-inch size minimum, I had no interest in trying to target smallmouth.

“I knew the fishing would be tough, and it is crazy how it works out. Some of my good tournaments down here, I’ve had the worst practices. I caught a few in practice and had no idea what was really there until the tournament started.”

His magic spot was around the canal that connects Tellico Lake to Fort Loudoun Reservoir. Gustafson made the 40-mile run each day in his Lund 2075 Pro-V Bass aluminum rig powered by a Mercury 4.6‑liter V8 250hp Pro XS outboard.

Gustafson was the only angler in the field using a vertical-jigging technique he calls “moping.” It is also referred to as a Damiki rig. Positioning his boat directly over the fish, Gustafson enticed smallmouth he saw on his electronics to eat his fluke-style bait fished on a jig head.

With current pushing through the canal, Gustafson said the bass were hunkered down around hard bottom and rocks in 18 to 20 feet of water, so much so he couldn’t see them when he scanned the area with his 2D Humminbird sonar.

“There was a lot of bait, and then you idle through there and put your Humminbird 360 down, you see all the rock down there, and basically it was just a matter of figuring out where they were because they weren’t everywhere,” he said. “I thought it was fairly random, but as the tournament evolved, they were on specific spots. Just hard stuff on the bottom, rocks.

“I’m sure that these fish are hiding behind it. The water is cold. I feel like they don’t love being in the current right now.”

“Ron Lindner was the one who came up with this technique,” Gustafson said, referring to the freshwater fishing icon from Minnesota, who died in November 2020 at the age of 86. “From the mid-summer through the fall, that is the predominant way we catch smallmouth up at Lake of the Woods and Rainy Lake, where I’m from. I’ve caught thousands of bass doing that. I started fishing [in the United States] in 2012 and have been dying to get to a body of water where I could do that.”

The weather changed in Knoxville every day, and on Championship Sunday, fog delayed takeoff by 90 minutes, giving Gustafson some anxiety.

“The fog thing was fairly stressful. What I did learn over the last few days was the first hour was pretty critical. They are set up and biting better in the morning,” he said. “Before I got my boat in the water, I wasn’t that stressed, but [the fog and delay] got the anxiety going. Once we got out there and started fishing, I caught two good ones pretty quickly, and it took the pressure off.” 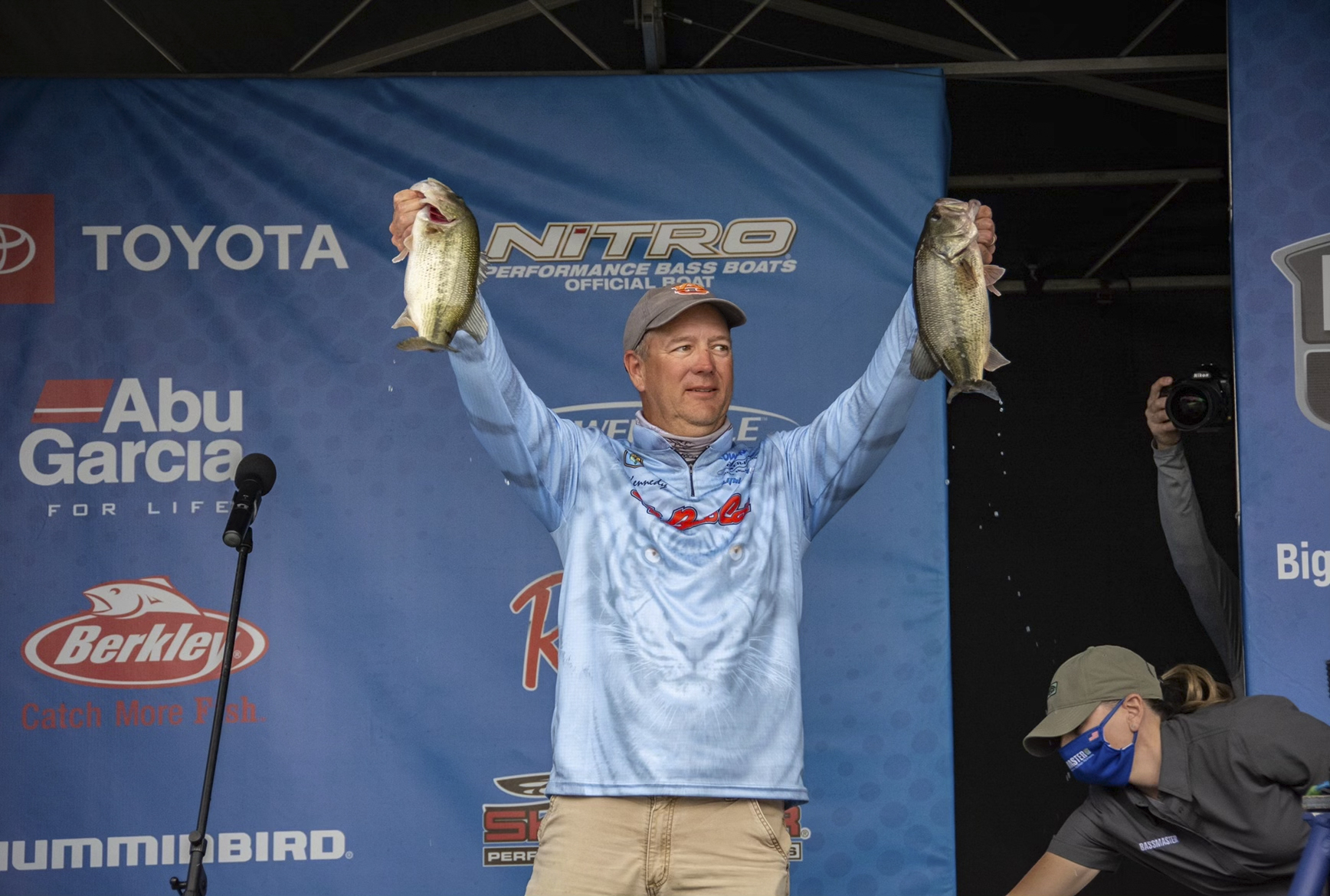 Gustafson finished out his limit and even came back to the downtown Knoxville weigh-in an hour early.

Mercury-powered pro Steve Kennedy followed his 20-pound bag from day three with an even 15 pounds on the final day, claiming second-place with 55 pounds, 15 ounces. The Auburn, Alabama, native notched his 30th career B.A.S.S. top 10 with the runner-up finish. 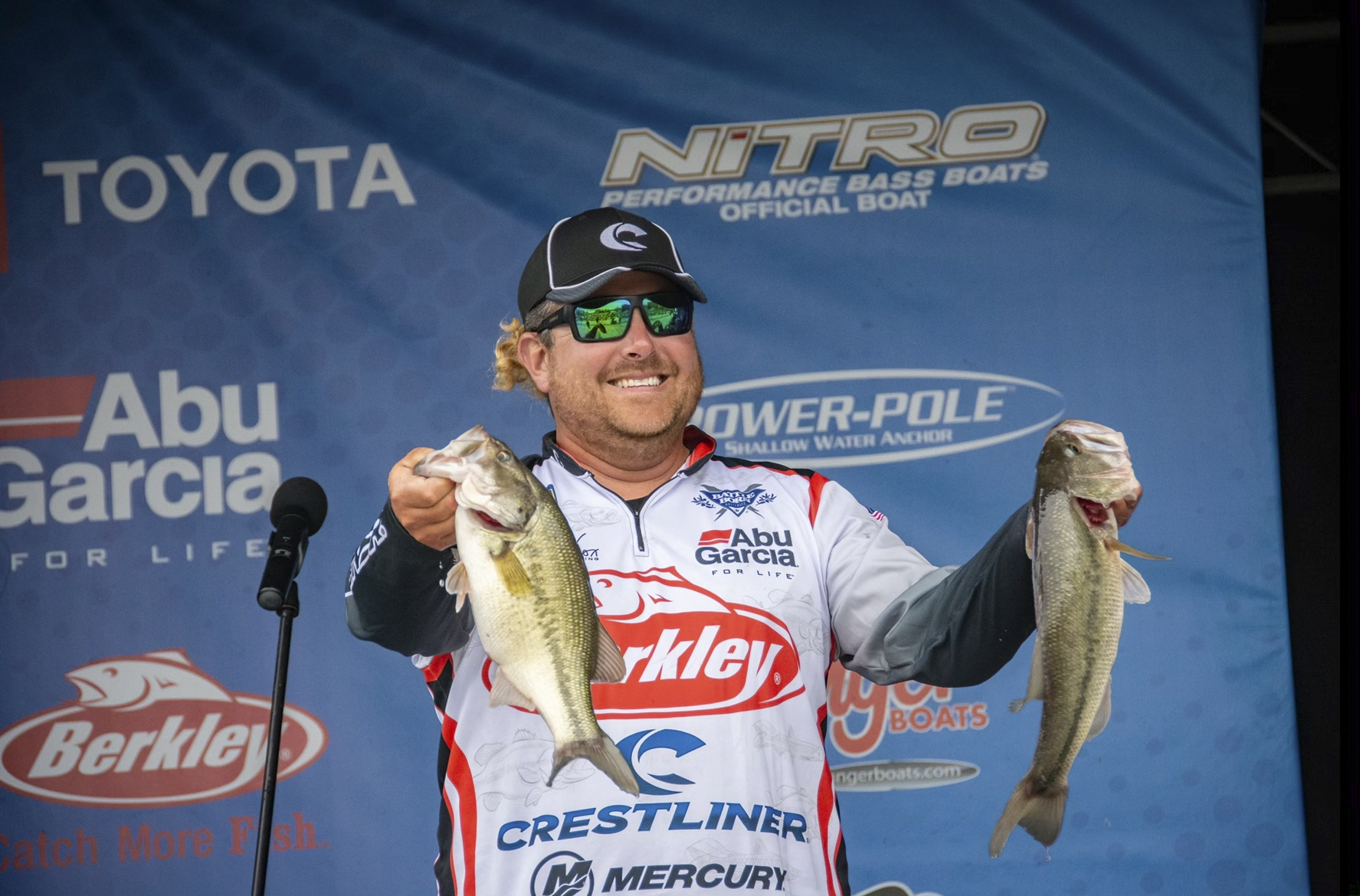 The win moved Gustafson up to second in the Bassmaster Angler of the Year race, behind fellow Mercury Pro Team angler Greg Hackney of Gonzales, Louisiana.