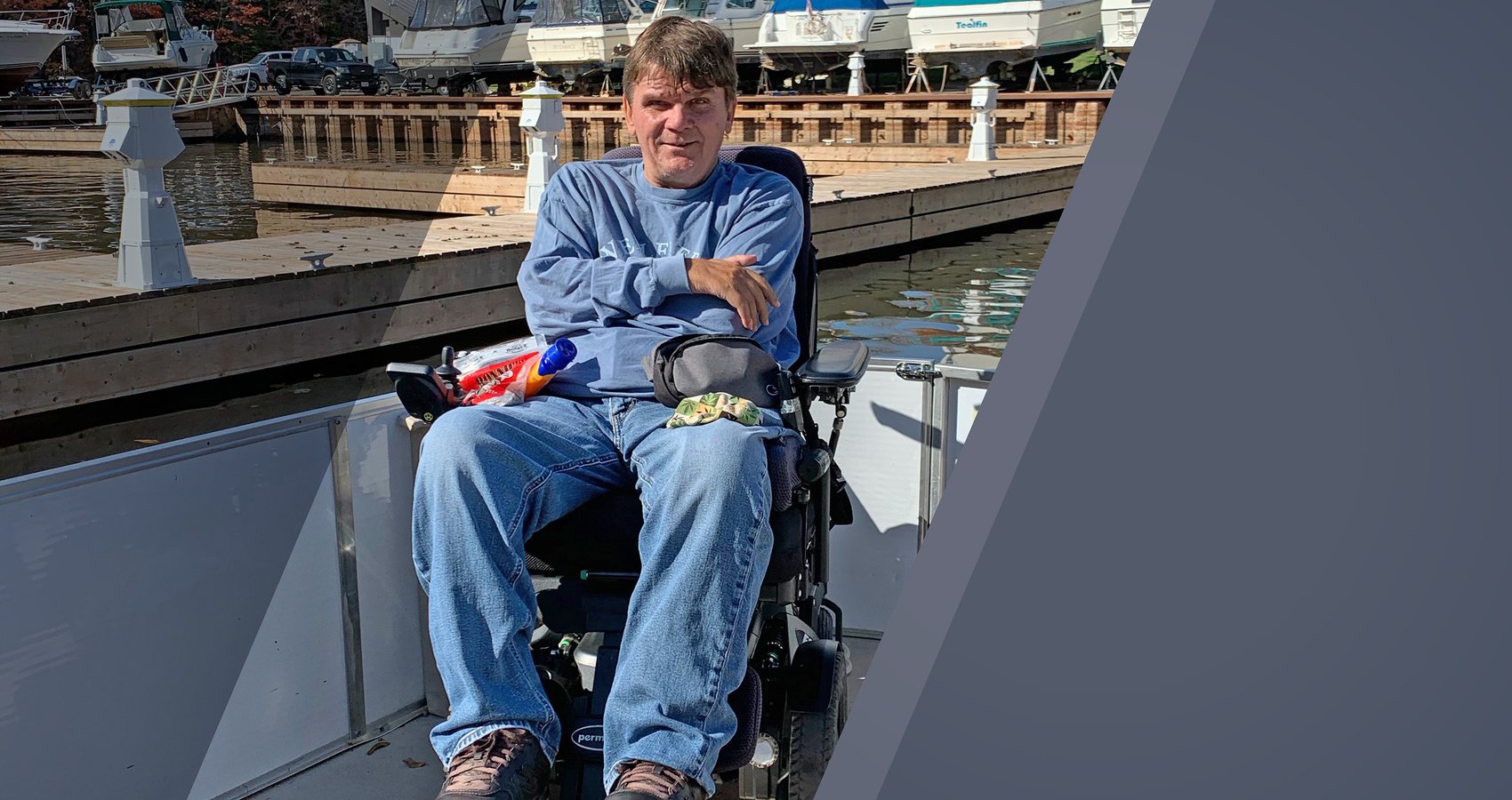 Stephen J. Cull’s goal is simple: He wants to give everyone with a physical disability or challenge the opportunity to get out on a boat.

“To get somebody in a wheelchair or who has a mobility impairment on the water, they love it, man,” he said.

CharterAbility, the volunteer organization that Cull co-founded in Oakville, Ontario, will take anyone who signs up for a free hourlong boat ride on scenic Sixteen Mile Creek in one of its two Harris pontoons – often with a live band on board.

“Our motto is: If we can find a volunteer to take your trip, your trip is confirmed,” he said.

Today, CharterAbility is more than 100 volunteers strong, and growing.

Cull grew up near Lake Ontario, owned a canoe, went boating and fishing with friends, and took getting out on the water for granted. Then, on January 12, 1991, at age 28, he crashed his toboggan into a tree and broke his neck. As a result of his C5/C6 spinal cord injury, Cull is now a quadriplegic who relies on a wheelchair for mobility.

“I can’t feel anything from the waist down,” he said.

Cull spent 38 days in intensive care after the accident. Throughout this ordeal, the patient in the next bed to his at the hospital was Paul Madsen, who had suffered a broken neck in a car accident in Muskoka, Ontario, two days before Cull’s sledding accident. Madsen also went through 11 months of rehabilitation with Cull, and they became close friends. After both men were discharged, Madsen invited Cull and his 85-year-old aunt, Peggy, to visit his home on Lake Muskoka in Ontario. There, the three of them went for a ride on a 20-foot pontoon boat that Madsen had modified to allow more room for wheelchairs on deck. They had a wonderful time on the water.

“I declared out loud on the lake that day, ‘I’m going to start a charter service,’” Cull said.

“He was a mentor, doing ‘charterability’ 18 years ago,” Cull said.

In 2003, Cull recruited a group of volunteers who shared his vision, and they attended the Toronto International Boat Show. “We gave out 10,000 flyers at that boat show for 11 days, with just an idea,” Cull said.

On learning that Randy Caruana, then director of sales for Mercury Marine Canada (now vice president of the Americas and Asia Pacific), was at the show, Cull quickly took the initiative. “I wheeled into his office at the Mercury display with a life ring on the back of my wheelchair. I said, ‘I want to start a charter service. I want to get people with disabilities out on the water, and I want to get Mercury involved.’ He said, ‘Sign me up,’” Cull recalled.

Caruana opened the door to valuable boating industry contacts for Cull and his group. 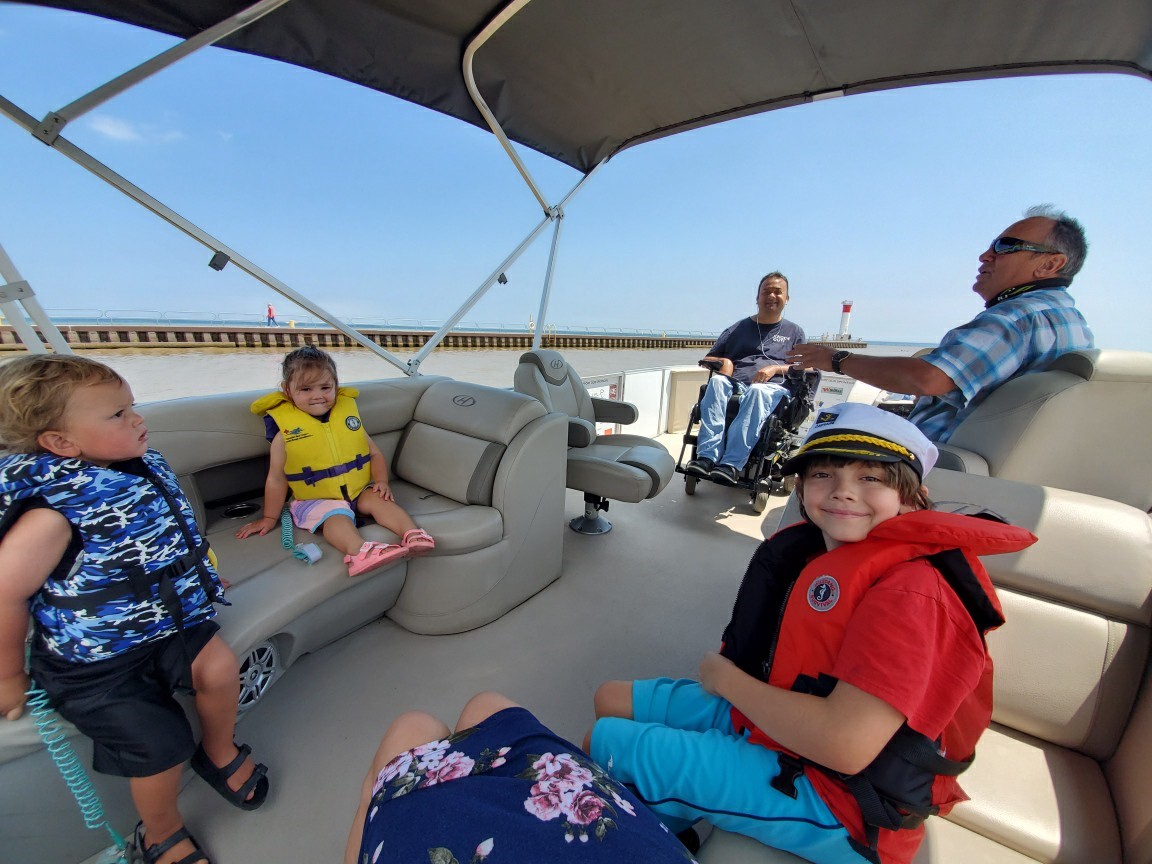 In 2003, Cull formally co-founded CharterAbility with Eric N. Rogers, an experienced captain, engineer and water taxi operator. Along with an all-volunteer board of directors, they launched the charitable organization with a clear mission: “To open the door to recreational boating for people who have been deprived of the opportunity by virtue of their physical limitations and personal circumstances.”

Some of the CharterAbility board members began offering free boat rides to people with disabilities in their personal pontoons, but the organization’s goal was to raise enough money to build a dock and purchase its own boats. Four years and more than $275,000 later, the hard work the team put into fundraising and grant-proposal writing bore fruit. In partnership with the Town of Oakville and local outfitter Wai Nui O Kanaka Outrigger Canoe Club, which offers paddle sports adventures for physically challenged individuals, CharterAbility opened a handicap-accessible dock on Sixteen Mile Creek in Oakville. The dock incorporates a seawall lined with easy-to-navigate EZ Dock custom floating docks and has wheelchair-accessible bathrooms.

“We created a space under a bridge on our river that no one was using. Our community really bought into it. A local landscaper did the stonework. All the stores downtown support us, and the local boat clubs support us. Today, more than 1,000 people a week use that dock,” Cull said. “Everyone knows CharterAbility.”

In late 2007, CharterAbility volunteer John Blakely purchased Madsen’s pontoon boat for the organization. It was the very same boat that had inspired Cull to co-found CharterAbility, bringing his dream full circle.

“We used that boat for 10 years, getting thousands and thousands of people out on the water,” Cull said. 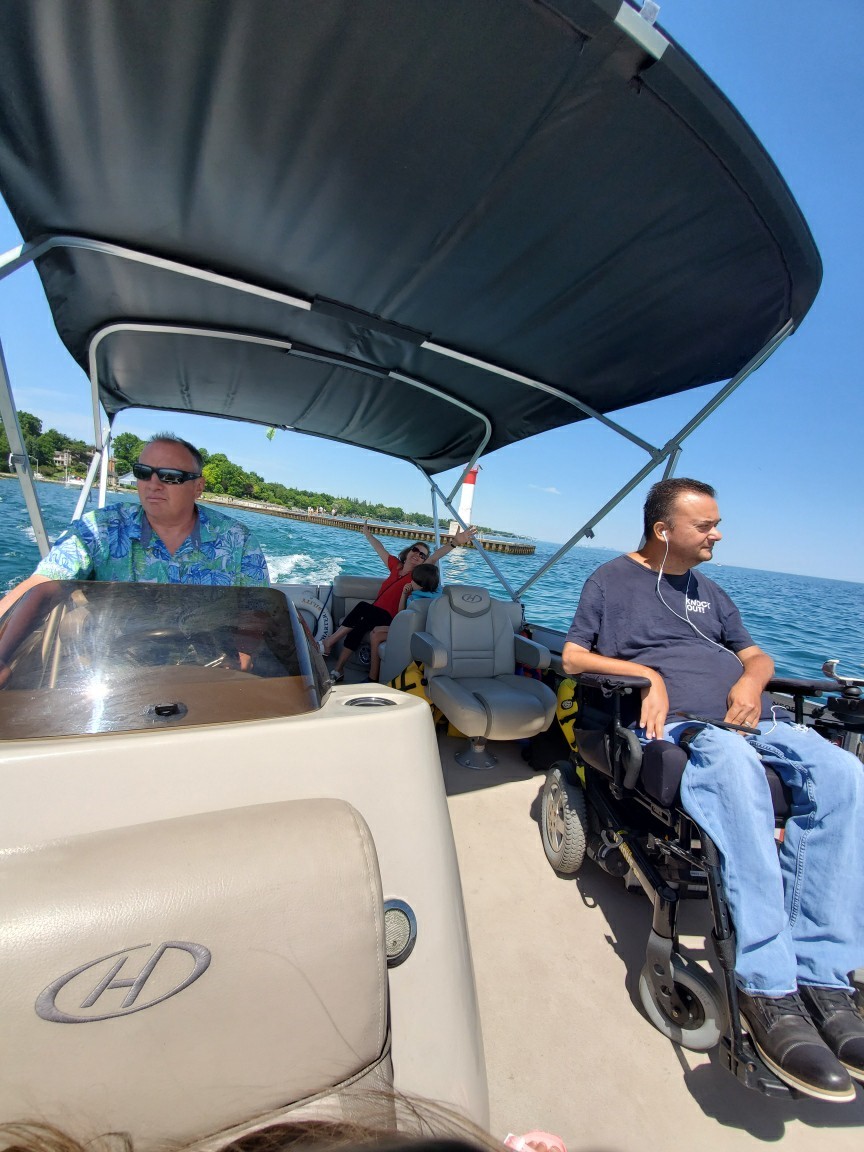 By 2017, CharterAbility volunteers were providing more than 500 free boat rides over the course of the summer season, which added up to more than 3,000 disabled and physically challenged individuals getting out onto the water. That year, CharterAbility finally was able to purchase a new pontoon boat – a 20-foot Harris FloteBote equipped Mercury 60hp FourStroke outboard – from Gordon Bay Marine in Mactier, Ontario.

CharterAbility had the Harris pontoon’s bow gate modified aftermarket to make it 35 inches wide. “We wanted to make it accessible to every wheelchair in the country,” Cull said.

The group also removed the boat’s front bench seat to make space for more wheelchairs. A ramp attaches securely to the bow via two stainless steel pins, allowing passengers to wheel or be wheeled up safely up onto the boat’s deck from the dock.

Two years later, in 2019, CharterAbility acquired a Harris Cruiser 210 pontoon, also powered by a Mercury 60hp FourStroke. That boat, which came with a 28-inch-wide gate, didn’t need any modifications to accommodate wheelchairs.

“They are perfect for us,” Cull said of the two Harris pontoons, adding, “Oakville Harbour Marina has been giving us free mooring for them.”

The new Harris pontoons have enabled CharterAbility to increase the number of free boat rides it offers to a dozen one-hour trips every day, seven days a week, weather permitting, during boating season. The pontoon rides are so popular that some local assisted living facilities even started arranging group outings to CharterAbility’s dock. In 2019, volunteers took passengers out on the boats a whopping 750 times.

“They come by the busloads. If it weren’t for CharterAbility, these people would never get out on the water,” Cull said. 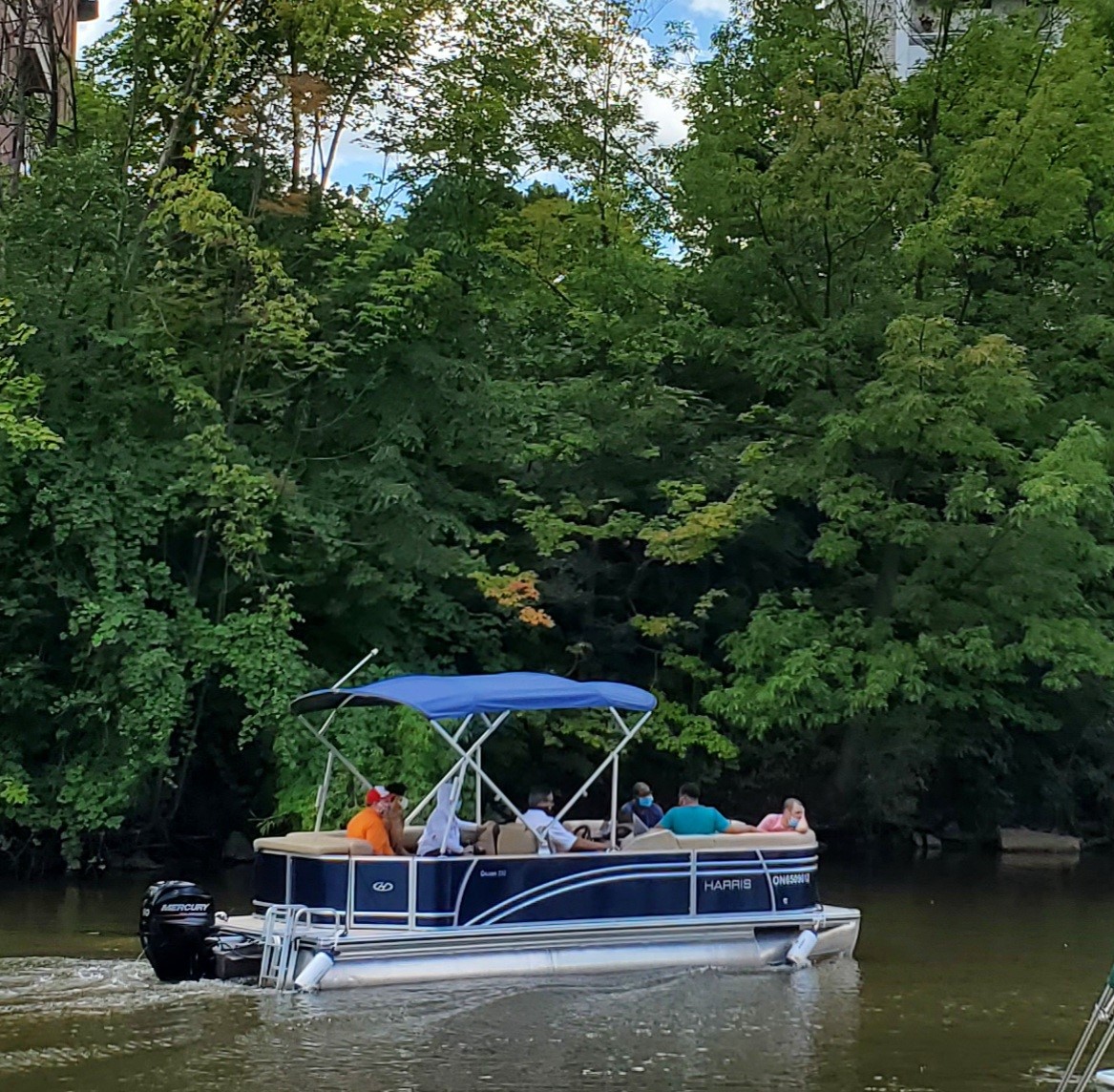 The COVID-19 pandemic and resulting lockdowns severely limited the number of boat trips that CharterAbility could take in 2020, but even so, its volunteers still managed to provide 300 trips and remained busy fundraising for a major 2021 dock-renewal project.

“We are expanding our dock to the tune of close to a million dollars this year. We are breaking ground in September,” Cull said.

The project will include doubling the amount of EZ Dock floating dock, rebuilding the seawall, renovating the handicap-accessible bathrooms, and creating an “activity hub” with an outdoor kitchen and water bottle refilling station.

CharterAbility has grown to be a big deal in Ontario, and Cull would love to see its concept take root in other parts of Canada and the U.S. as well. His reward for all the work he puts into the organization remains the same, however: “Seeing the smiles on everyone’s face.”

He added, “I’m the luckiest guy in the world.”

For more information on CharterAbility and how you can help, please visit charterability.com.