Miami, Fla. — Mercury Marine has announced the launch of the 400hp Verado outboard engine today, the company’s highest horsepower Verado-branded outboard engine in its portfolio. Since the launch of the 350hp Verado and the Mercury Racing 400R four years ago, consumers have been requesting a higher horsepower Verado engine, and today, boaters around the world will have the opportunity to repower thanks to this extension of Mercury’s L6SC Verado platform.

“The acceptance of the 350hp Verado in the marketplace has been incredible and through extensive conversations with our global customers, we have learned that there is an appetite in the marketplace for a Verado-branded 400hp four-stroke outboard engine,” said John Pfeifer, Mercury Marine president. “As boats continue to increase in size, so has the need for more power. This gives us an opportunity to provide an even higher horsepower Verado in the market, providing the durability and reliability that the Verado brand is known for around the world.”

The 400hp Verado is suitable for a wide range of applications, including center consoles, pontoons, bay boats, and larger sport boats. Consumers of these boats will appreciate the added power over and above the 350hp Verado while maintaining the standard for smooth and quiet operation for which Verado outboards are widely known. Weighing just 668 pounds, same as the 350hp Verado, the 400hp Verado is also the lightest outboard in the 400+ HP category by nearly 300 pounds.

The 400hp Verado will be available in all the same model variations as the 350hp Verado. It will exclusively use the 5.44” 1.75 HD (heavy duty) gearcase and will be available in Phantom Black and all three shades of white: Warm Fusion, Cold Fusion, and Pearl Fusion. It is also compatible with Mercury Joystick Piloting for Outboards (JPO).

Mercury Racing will continue to offer the 400R in two different gearcase configurations: the 5.44” 1.75 HD, which is appropriate for lighter, faster (<80 MPH) hulls that would benefit from a 7000 RPM red line; and the SportMaster 1.75, which is intended for high-speed (>80 MPH) applications.

“The introduction of the 400hp Verado is another step in the evolution of the proven L6SC platform that has been successful in the market and we expect to be successful for years to come,” said Pfeifer. “Through extensive consumer research, we have determined that there is a market for both variations of the 400, giving consumers the opportunity to have two extremely reliable outboards to choose from based on their preference.”

The 400hp Verado is available for order today and will begin shipping in the spring. 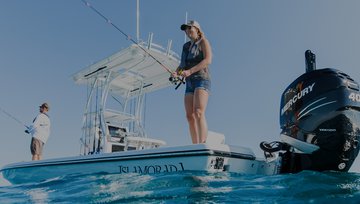 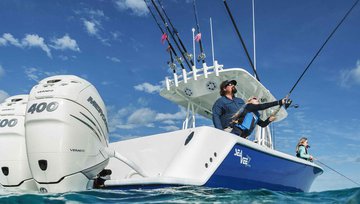