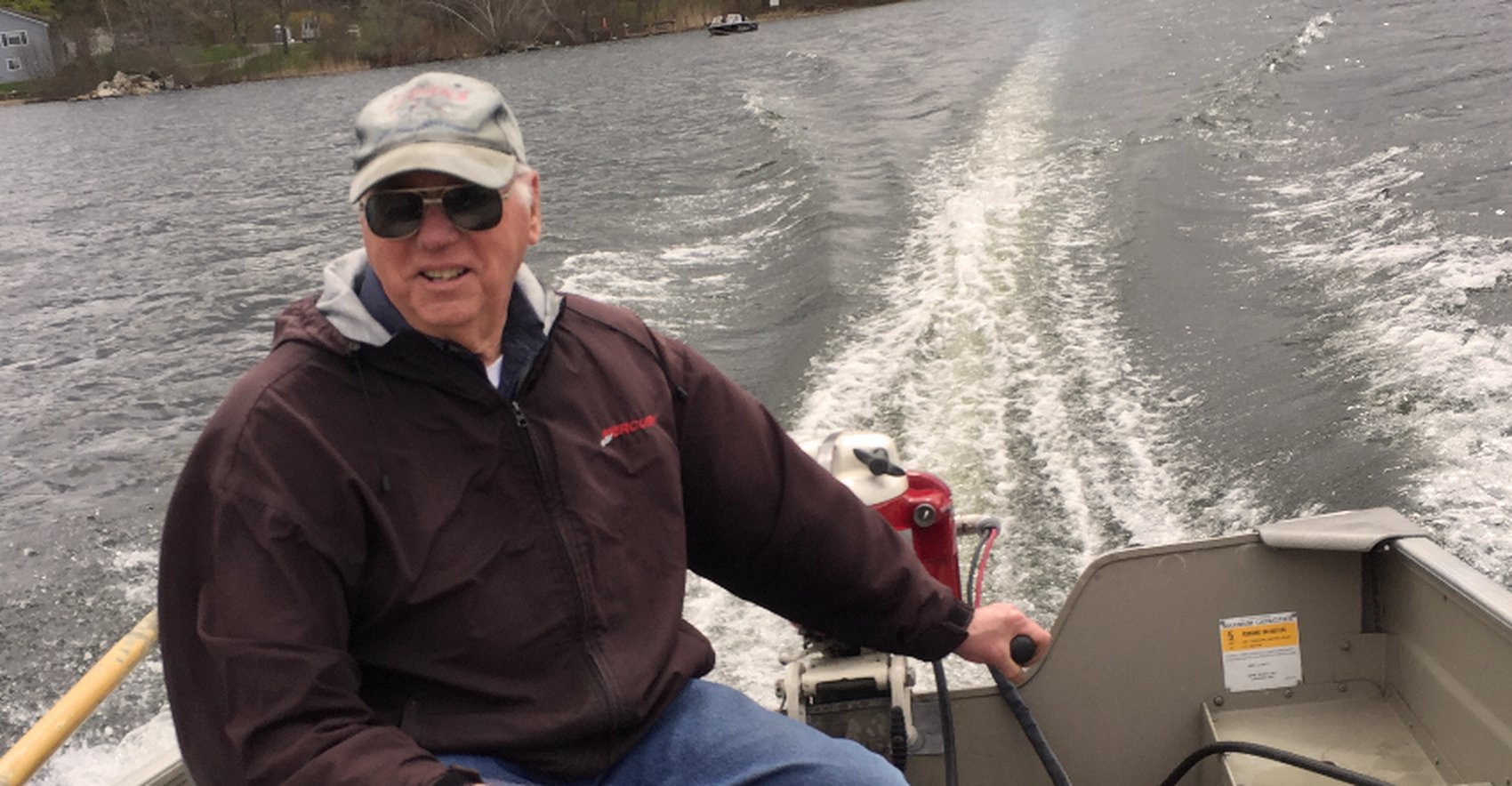 If you’re ever driving through Connecticut and spot a truck with a license plate that reads “MERC,” that’s Walter and Maureen Leniart. There’s a chance their truck will also be pulling a boat, or perhaps hauling an outboard engine, because their life story is directly connected to spending time together on the water.

“My father grew up in Hartford on the Connecticut River shores, and he always loved the water,” he says. “He started taking me fishing and we would rent a boat with oars.”

But rowing got a bit tiresome. So, Walter’s father found an old sailboat, added an engine, and converted it into a fishing boat. That meant no more rentals and no more oars. Then, Walter’s godfather and uncle purchased boats with 1953 Mercury Marine Mark 7, 7.5hp motors.

“My godfather took us on the Connecticut River with that since it had some power,” Walter remembers. “And with the sleekness and the speed, I was already hooked as a young teenager.”

Walter and his relatives began working on the boats and tinkering with the outboard motors. He remembers helping repair his uncle’s Mercury engine after it was damaged. As a youngster, Walter scrounged and saved pennies from his school lunch money so he could eventually buy his own engine.

“I was a featherweight back then, and I stayed that way, because I took that 34 cents a day and started saving.” he says. According to Walter’s daughter, Sheila, if you knew how much he loves to eat, you’d understand this was quite the sacrifice.

Walter graduated from high school in 1961 and enlisted in the U.S. Navy. He returned home years later with a single goal.

“When I got out of the Navy, the first thing on my mind was, ‘I’m getting on the Connecticut River and I need something that’s gonna go,“ he said. Walter saw an ad for a 16-foot wooden Commodore and became a boat owner.

Only a few months later, he’d use that boat to take the woman who’d become the love of his life on their very first date.

“The first thing we did on that Memorial Day weekend was go on the river with the boat,” he recalls. “She had no experience on the water whatsoever until we met. So, it started really going from there.”

Walter isn’t kidding. According to Maureen, who was 18 at the time and is now 72, the pair met May 29th and on June 25th he asked her to marry him. It seems the romance of the water helped accelerate a lifelong love of boating and each other.

“Every Sunday he would come to pick me up and we’d go on the river on the boat,” Maureen says. “I got to absolutely love going out there just for rides. As time went on, in my early twenties I learned to waterski.”

When the Leniarts started a family, they made sure to share the joy of boating with their two daughters, Sheila and Karen, at an early age.

“Sheila was two years old and Karen was 18 months when they first went fishing on the boat. We didn’t take them from shore, we took them on the boat,” says Maureen, adding that the girls were even younger when they took their first boat rides on Walter’s Commodore.

In 1974, the Leniarts upgraded the wooden Commodore to a brand-new fiberglass Sea Ray, which could handle more power. The family eventually purchased an 85hp Mercury engine so the entire family could enjoy waterskiing.

“That got me back to the engines I loved as a kid,” says Walter. “They are so sleek and nice, and boy do they really carry the mail if you got them set up right. We ran that 85 until it’d just had it and wore out.”

After that, Walter purchased a 150hp 1973 straight-cylinder Mercury engine, which he kept on his Sea Ray for many years. It was still on the boat when he sold it to a friend just a few years ago.

Several different outboard engines have played a role in the Leniarts’ life story, but those mentioned so far represent only a fraction of the machines they’ve had their hands on. The couple has also curated an extremely impressive collection of antique outboard engines.

Walter tells another family story to illustrate his dedication to this hobby. Nearly 40 years ago, Karen had a school assignment based on getting a Christmas present for her father.

“She wrote about how I had 14 motors and my favorite was a Mercury Mark 25. And, if she could, she would get a Mercury supply book and kit for her daddy. So, we were already on our way with the antique stuff in 1980,” Walter says.

Maureen says the collection has reached 136 outboard motors (she took inventory just before the interview for this story). Twenty of those engines are hers. The largest of those, which she says she loves, is a Mercury Mark 50 from 1954.

Somewhere in the dozens of classic outboard engines in the Leniarts’ cellar is the Mercury Mark 7 that belonged to Walter’s uncle, one of the machines that caused him to fall in love with boating and motors in the first place.

“What makes it so interesting is the history of the outboard engines and the engineering,” he says.

Helping hands and an open home

In the ’80s, the Leniarts happened to cross paths on the river with members of the local Antique Outboard Motor Club (AOMC). They joined instantly and became very involved with the club, which opened doors to help them expand their collection.

“It was a whole bunch of people just like Maureen and myself,” says Walter. “Now we had the availability of parts, because where are you going to find these parts? You can’t.”

Walter explained there are even machinists in the club who can fabricate those seemingly impossible-to-find antique outboard engine parts.

The Leniarts were co-presidents of the Yankee Chapter of the Antique Outboard Motor Club during the ’90s, and Maureen currently serves as treasurer. The couple attends meets all over the Northeast. There were even many times when the Leniarts hosted swap meets at their home.

“The last one we had in 2005, there were about 200 people at our house,” says Maureen. She fed those crowds home-cooked meals, and the neighborhood street was packed with parked cars. For winter meets, Walter even ran the snow blower over the lawn to make room.

Among the many stories involving fellow members of the Antique Outboard Motor Club is one about the Leniarts’ friend, Dave, who’s been in a wheelchair for several years. Walter helped refurbish a Mercury Mark 25 for his friend to use. But, Dave struggled to get the engine started.

Walter knew the Mark 25 also came in an electric start version. He rallied members of the club to help find and build parts to retrofit Dave’s engine andd convert the Mark 25 into a Mark 25E.

Dave no longer has trouble starting his classic Mercury Marine engine and enjoying the water.

Passing along the passion

The many fond memories and stories that boating brought to the Leniart family will no doubt live for generations.

Walter boasts that Sheila is taking up the torch for him and has become an avid barefoot water-skier. Today, Sheila lives in Florida, a long way from the Connecticut River. But, she owns a boat of her own with an outboard engine that’s a bit more modern than those in her parents’ basement. It’s a 300hp Mercury Verado.

The next Leniart generation is now discovering the joys of boating. Walter and Maureen have two granddaughters, ages 11 and 13. While the Leniarts don’t see the grandkids as often as they’d like (and what grandparents do?) the girls have been on boat rides with grandma and grandpa and would count the many antique outboard engines during visits.

“They love fishing,” said Maureen. “We actually took them to the same place where Sheila and Karen fished and where Walt fished when he was four years old.”

That takes us back to where it all started many years and 136 engines ago. It’s a happy reminder that outboard engines do more than power boats; they bring families and friends together.

Twelve years ago, I constructed my first homemade watercraft – a large raft made of truck tubes and old plywood – and launched it on the longest, fastest river on the continent, the Missouri River. I was equipped with little ...