Win on Sunday, sell on Monday 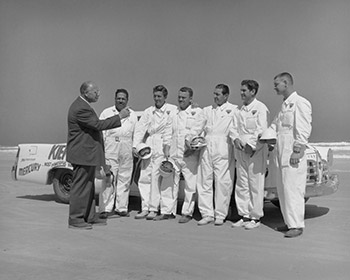 When Team Mercury unloaded its Chrysler 300 touring sedans at Daytona Beach, Fla., at the start of the 1955 NASCAR season, they were greeted by laughter from competitors and fans. But the laughter faded quickly, as the team amassed a 60-percent win record that still stands.

Even the most devout fans may not realize that many NASCAR conventions – practices so routine today they are taken for granted – were conceived in Wisconsin. Kiekhaefer's cars were high-speed billboards, and were the first stock cars to be hauled in enclosed trucks painted to match the cars. The team was the first to don matching uniforms and practice coordinated efforts that led to the first 30-second pit stop. Kiekhaefer was the first owner to have five cars running at Daytona.

Key to his success was a penchant for R&D. Among his innovations were the first roll cage in a production car, the first scientific testing on used racing oil to gauge the effects of contamination on performance, and the first dry paper air filter for an automobile -- now standard around the world.

His stable included two of NASCAR's Top 50 drivers of all time: Buck Baker and Tim Flock. The two combined for the most single-season team victories, and Flock captured 19 pole positions – two records that still stand today. Kiekhaefer pioneered on other fronts, hiring Charlie Scott, the first African-American to drive for a national race team. Kiekhaefer's contributions to auto racing were finally recognized in 1998 when he was named to both the "NASCAR Fabulous 50" and the Motorsports Hall of Fame of America.

Taming the beast: X-Haust creates a hush around the world

Not everyone thinks the roar of powerboats is music to the ears. The European Union (EU) instituted stringent guidelines for exhaust noise while simultaneously adopting strict engine emissions limits.

Mercury Racing answered the EU's concerns about engine noise with X-Haust, a fully integrated sterndrive exhaust noise-reduction system. The patented design flows exhaust through two chambers connected by three attenuating tubes before it exits through an outlet – below the waterline.

Incorporating the X-Haust system brought Mercury Racing's HP600 SCi and the EU662 SCi into compliance with more stringent regulations. These supercharged engines are the highest horsepower certified for sale in the EU and the only engines to meet the EU's exhaust and noise emission requirements.

The EU noise requirement is less than 78 decibels, about the same as waves lapping on the shore.

Back to History
Next
Previous
Atrás
MercuryMarine.com utiliza cookies