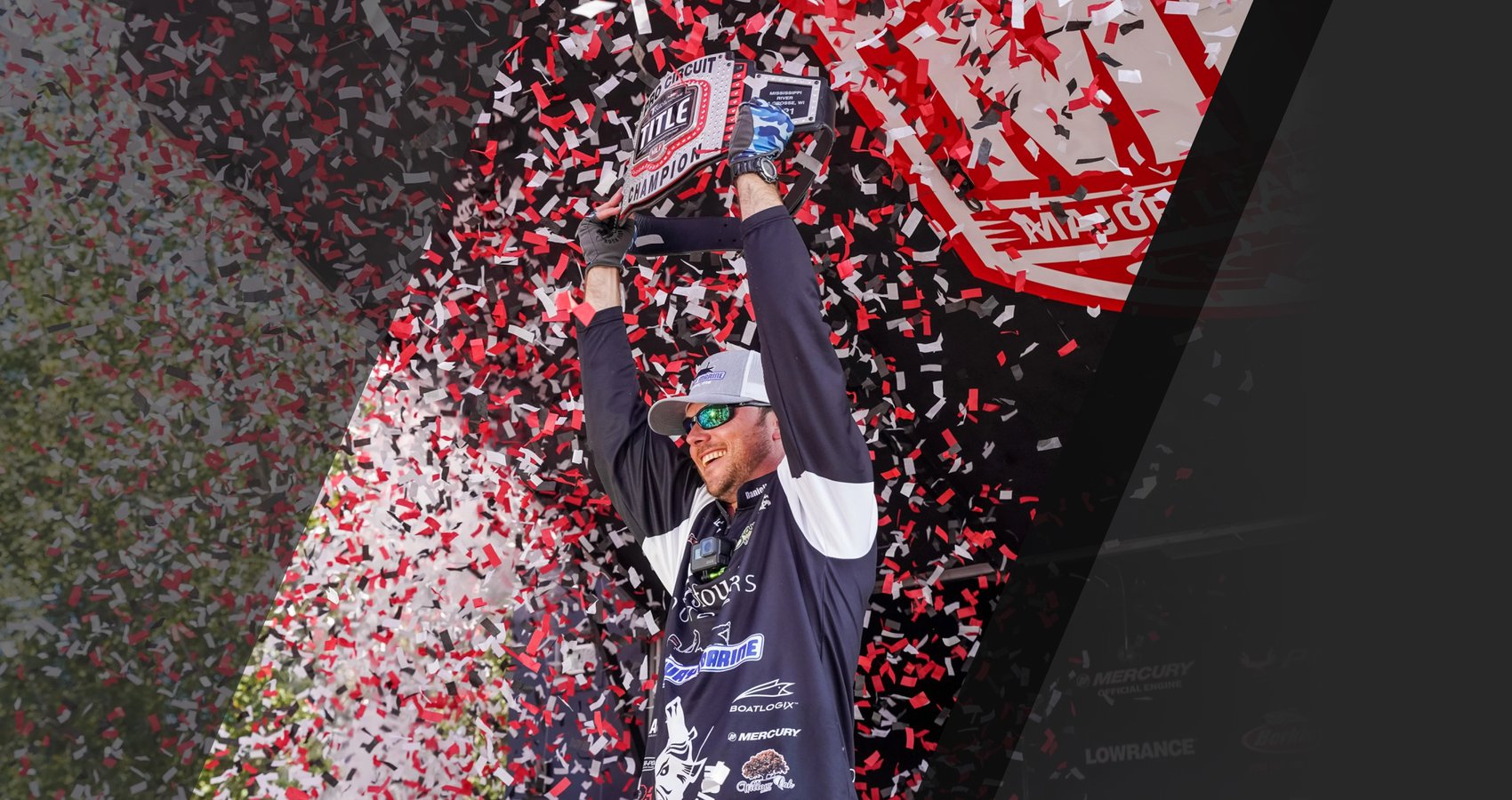 Mercury® Pro Team angler Jimmy Washam, of Covington, Tennessee, brought the biggest five-bass limit of the tournament (17 pounds, 15 ounces) to the stage in the Championship Round to win $200,000 at the second annual Major League Fishing® (MLF) TITLE Presented by Mercury. The event, which is the championship for the MLF BIG5® Pro Circuit, was held Aug. 17-22 on the Mississippi River in La Crosse, Wisconsin.

The Championship Round was the finale of the six-day tournament, which featured the top 48 pros in the 2021 Pro Circuit standings, along with the reigning TITLE champion and 2020 Angler of the Year, all competing for a purse of nearly $900,000. Weights were zeroed going into the final day’s competition, when Washam bested the field.

It was a milestone moment for Washam who, in 2012, began competing as a non-boater in the MLF BIG5 Phoenix Bass Fishing League, a regional series for weekend anglers. He soon transitioned to fishing as a boater before moving up to the triple-A MLF BIG5 Toyota® Series in 2017. Washam qualified for the Pro Circuit through the Toyota Series Central Division in 2019 then qualified for the TITLE championship in 2020 and 2021.

“Five years ago, I bought my first fiberglass boat and decided I’d fish the Phoenix Bass Fishing League as a boater,” Washam said. “Now I’m standing here with a TITLE belt on my shoulder.”

Washam won the event fishing in a Ranger Boats® Z520L powered by a Mercury 4.6L V8 250hp Pro XS® outboard. Mercury has powered all six of his tournament boats.

Moving up through the ranks hasn’t been easy for Washam, who works full time as a deputy sheriff sergeant.

“I’m 34 years old, and I didn’t start as young as I wish I would have,” said Washam, “but I had to earn a living and work, so it was a slow progression to step up to this level. After last year, I knew that I could hang, and this year has been an absolutely incredible year. It’s humbling to know the group of anglers I just joined.”

Washam said that on the final day of the TITLE, he was contemplating going back to spots he had fished previously in the Black River, where he’d located a few places where he could pull up and catch a limit in a few casts. Ultimately, he decided to make a change and visit an area he discovered in practice, which turned out to be the winning move.

“I got to thinking, it’s Sunday, and there are a lot of guys out fishing,” said Washam. “I’ve got a place that likely has the winning bag on it. Why in the world would I not go there first? Literally, as I pulled up, there was a guy in a johnboat that was slinging a topwater, and he was only half a cast away from my fish. I don’t think he knew what was there, but he was really close to finding out.

“He was a total class act,” Washam continued. “I pulled up and said, ‘Good morning.’ Of course, I was going to ask him as politely as I could if he minded giving me a little space for a couple of hours, but I didn’t even have to ask. He picked up the trolling motor and left, then came back later as a spectator. It turns out he works at the sheriff’s office in La Crosse.”

The way Washam discovered his winning area is also noteworthy.

“The way that I found the ‘closing dam’ (also called a wing dam) that ran across the mouth of the slough was during practice. I had my motor trimmed down, trolling motor on high covering water, and I smoked a rock with the skeg of my motor. You couldn’t see the dam, but it was about a foot and a half under the surface (due to the low-water conditions on the river). That’s where I ended up winning the tournament.”

Nerves were not a factor for Washam going into the Championship Round, even with $200,000 on the line.

“I was confident going into the final day,” said Washam. “Any time you find something like that, and you’re able to leave it for Championship Sunday, it’s great. But I’ve played this game long enough to know that there are so many variables. When I made the first cast and didn’t get a bite, the wheels started turning. Then, when I made the second cast and caught a 3-pounder, I was pumped.”

In 2022, Washam plans to compete in the Pro Circuit again, with an eye on qualifying for a coveted spot on the MLF Bass Pro Tour. With the 2021 TITLE win, he also receives an automatic invitation to defend his title in 2022.

Top 10 Finishers at the TITLE on the Mississippi River

A complete list of results is available at MajorLeagueFishing.com.

The 2021 MLF BIG5 Pro Circuit consisted of six regular-season tournaments, followed by the TITLE championship. Individual titles were awarded for the Angler of the Year and the Rookie of the Year.

Mercury-powered pros won all of them: all six tournaments, the TITLE, Angler of the Year and Rookie of the Year.

Angler of the Year – Michael Neal

Rookie of the Year – Clabion Johns