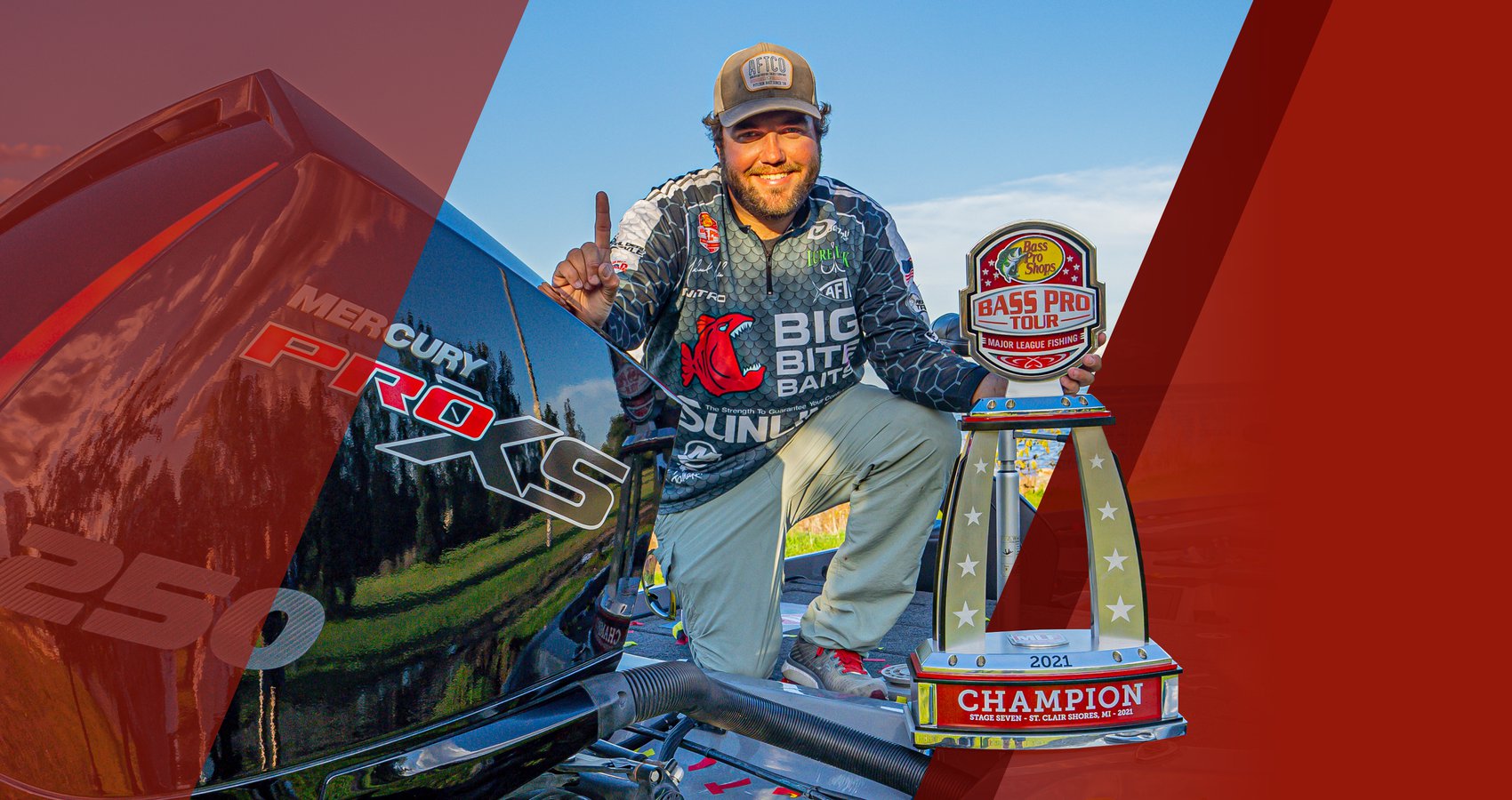 Mercury Pro Team angler Michael Neal has long been considered one of the top professional anglers in the sport, but with an unfortunate caveat: Even after nine years of impressive consistency and repeated finishes near the top of the leaderboard, Neal lacked a major pro-level win or Angler of the Year award.

Finally, in 2021, Neal made it happen. He put together another season of high-level, consistent fishing, and along the way brought home two impressive titles.

First, he won the Major League Fishing (MLF) BIG5 Pro Circuit Angler of the Year award, which was finalized in early August at the St. Lawrence River in New York. Then, competing on Sept. 10-15, Neal won the MLF Bass Pro Tour Stage Seven at Lake St. Clair in Michigan.

Consistency is the underlying theme of both titles. To win the Pro Circuit AOY, Neal had to outperform some of the top professional bass anglers over the course of a six-tournament series. During his Bass Pro Tour win on St. Clair, Neal consistently blew away the field. He recorded more than 100 pounds each of his three days on the water. 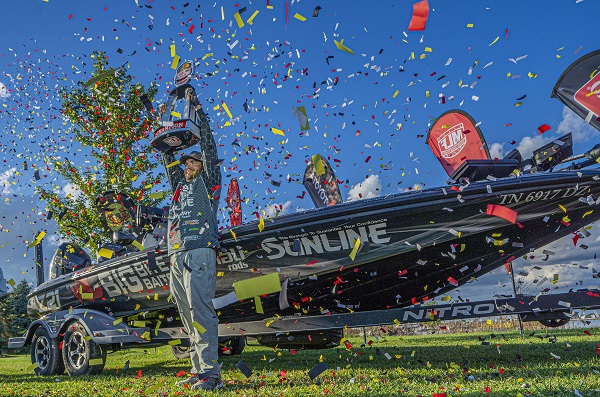 “What a week,” Neal said. “I really am not sure what to say at this point. The first win of my career, and it feels really, really good to get the monkey off of my back. I’ve had so many second-place finishes. I finished second this year at REDCREST (the Bass Pro Tour championship). I never would have expected my first win would be with smallmouth. I’ve never been a ‘smallmouth guy.’ I grew up on the Tennessee River fishing offshore. But I’ll take it.”

Neal caught his winning fish mainly off one key area near the mouth of the Detroit River in Lake Erie. He described the spot as a massive grass flat with some high spots, rock and depressions. Neal estimated that the flat was about three-quarters of a mile long and loaded with smallmouth.

“I came here in day two of practice, really because I was just sick of fighting the wind,” Neal said. “I doubled up on a crankbait, then caught one or two more, then left. I really had no idea what this area really held. On day one of the tournament, this was actually my fourth stop.”

“I got to catch them on a little bit of everything,” he continued. “I caught some on a vibrating jig, a drop-shot rig and a crankbait. The crankbait was by far my No. 1 bait. And it had Gamakatsu G-Finesse treble hooks that were designed by Aaron Martens. Even though he couldn’t be out here with us this week, I want to give a special shoutout to Aaron for designing those hooks. You’re going to lose some fish when you’re fishing smallmouth, no matter what. But I caught the majority of them, and those hooks were key.”

Martens, a fellow Mercury Pro Team angler, was unable to compete at the St. Clair tournament due to his ongoing battle with brain cancer. Yet, his impact on the sport continues even though he’s not on the water with his peers.

For winning the Bass Pro Tour event, Neal earned the top prize of $100,000 and the most important thing to him – the giant red winner’s trophy that he now will keep forever.

“It feels so good to finally win,” he said. “I caught tons and tons of fish, had a great time and broke several records this week. But records are meant to be broken, and I’m sure someone else will break them the next time we go to another phenomenal smallmouth fishery.

“I’ve been remodeling my house for over a year. I have a lot of second-place trophies, but now I have two big trophies that I will have to find a place for,” Neal added with a laugh.

A complete list of results can be found at MajorLeagueFishing.com.

Mercury pro Andy Morgan, also of Dayton, Tennessee, won the $3,000 Big Bass Award for the largest bass of the event with a 6-pound, 5-ounce largemouth bass that he weighed in during the Knockout Round.

Neal wound up fourth overall in the Bass Pro Tour Angler of the Year standings.

More About the Pro Circuit Angler of the Year

Neal was one of 20 Bass Pro Tour anglers who also fished the Pro Circuit, a sister MLF league that conducts tournaments using the traditional five-bass-limit format. The Bass Pro Tour operates with a catch-record-release format where every fish over a predetermined size counts toward an angler’s daily total.

Growing up in a family of Tennessee anglers, Neal started fishing as a pro on the former FLW Tour at just 20 years old. Since then, he’s finished second in the Forrest Wood Cup and REDCREST – both major championships – and has generally been as consistent as it gets in fishing.

Neal beat out Mercury pro Skeet Reese by 17 points for the AOY title and was one of nine Mercury-powered pros in the top 10 in the standings. The champ said he got “lucky” all year, with one good call after another making the season come together. Though, when you do it all year long, it stops being luck at some point. Neal is certainly grateful for the things that went right.

“There’s something from every single tournament that I can look at and say, ‘Wow, that was lucky.’ Either catching a big one or catching a couple off a place or whatever,” Neal said. “At Murray, for one, I went up the river in practice for about three hours and had one bite, and it was a 2-pounder. Then, the first day I had an OK bag skipping docks. The second day, I had to find something else to do. I went up the river and started catching them. On the fourth day, that’s where I caught almost all my fish.

“At the Potomac, I didn’t fish down south all tournament, then I ran back to Aquia [Creek] the last day and caught some fish that were really key to coming in second. Every tournament, there’s something that happened that just helped things go right.”

Even at the St. Lawrence, on his very last day of fishing, Neal experienced a fortunate event.

“I was retying, and I had individual rock piles marked, and I set my trolling motor to go toward the next one, and it actually put me up on top of a grass flat,” Neal said. “As soon as I got done retying, I realized where I was, stood up, picked up a drop-shot, flipped to the edge of the grass and caught a 4-pounder right there. It’s been like that all year.”

In 2021, fishing both the Bass Pro Tour and the Pro Circuit, Neal put together his best year yet. He plans to fish both tours again in 2022.

“Going into the year, I was on the fence of whether I should have fished both,” Neal said. “I wasn’t sure if I would get burned out. But I really think that’s what has caused me to have the year I have had on both sides.

“Winning the AOY trophy on the Pro Circuit really boosted my confidence, which is everything,” he added.

Mercury-powered pros took home the first-place trophy at all nine MLF Bass Pro Tour events of 2021, including REDCREST and the Heavy Hitters tournament, and they also took the top spot in all seven Pro Circuit tournaments, including the TITLE championship.