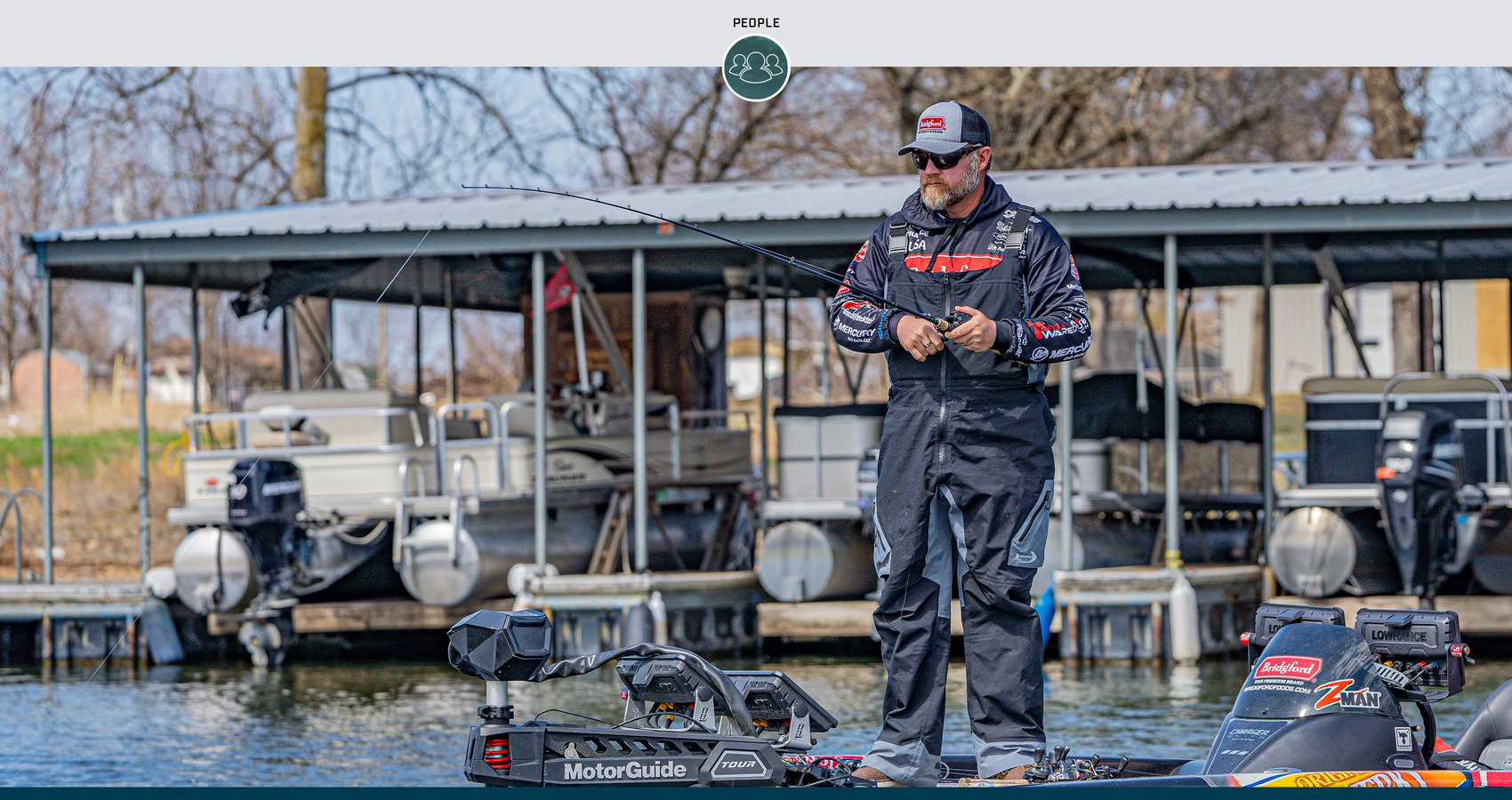 Quick poll: How many fish species have you caught in your lifetime? Three or four? More than 10? A couple dozen?

In the mind of Mercury Pro Team angler Luke Clausen, that number may directly correlate with how close you are to maximizing your fishing skills. Hailing from Spokane, Washington, Clausen has caught so many fish of different species – and big ones of each – that he feels like he has a leg up as a professional angler on the Major League Fishing Bass Pro Tour.

Clausen’s skill level and record of success are unquestioned. He’s won the FLW Cup (2004) and the Bassmaster Classic (2006), one of only five anglers to do so. In March, he came within ounces and just minutes of winning the Bass Pro Tour REDCREST championship. Clausen caught a bass that briefly put him in the lead for a $300,000 payday with minutes left on Grand Lake in Oklahoma, only to have Florida’s Bobby Lane pull ahead at the last moment.

The Classic and FLW Cup wins alone accounted for $1 million of Clausen’s $2,719,142 in professional tour winnings. Not bad for a kid growing up in Eastern Washington, far from the traditional roots of professional bass fishing. He’s admittedly obsessed with fishing, and not just bass fishing, which just might be why Clausen is where he is today.

A Fish is a Fish

Growing up in the eastern portion of the “Evergreen State,” a few miles from the Idaho border, Clausen fished for smallmouth and largemouth bass in both states. He came up fishing the numerous small lakes around Spokane, Banks Lake (where he won his first early tournaments), Sprague Lake, Moses Lake, the larger Lake Coeur d’Alene in Idaho, Potholes Reservoir and the Columbia River. As he got older, he expanded his fishing to the rivers that flow near the Pacific Ocean in western Washington and Oregon, as well as in the saltwater itself.

“Living out west allows me the opportunity to fish for some species that other people don’t have,” said Clausen. “I spend a fair amount of time near the Washington coast, fishing for steelhead and silver salmon in the Cowlitz, Grays and Naselle rivers. Those particular species relate to structure, like bass, and I have caught them with bass gear like square-bill crankbaits, ChatterBaits and jerkbaits.

“We also fish for king salmon, lingcod, sea bass and albacore out in the Pacific Ocean, launching out of Ilwaco. In the winter, we fish the Columbia near Kettle Falls for walleye, and it’s some of the finest walleye angling in the world, as far as big fish go.”

To compete as a professional, Clausen keeps his tournament rig, a Charger 210 Elite bass boat with a Mercury 250hp Pro XS® outboard, back east for tournaments and flies back and forth multiple times each year. He keeps another bass boat at the house for fishing when he is home. Each season after the last tournament, Clausen sells his tournament boat, loads up his truck with all his tackle and drives back home to Washington. He organizes his tackle during the offseason and then drives to Missouri to pick up his new boat for the next season.

Clausen is adamant that multi-species angling helps him sharpen his overall fishing skills. Every species and every situation bring with it lessons that he can apply toward the bass fishing scenarios he encounters on the Bass Pro Tour. It’s also a great way to learn things he might not otherwise experience if he exclusively fished for bass.

“One thing I’ve learned is how fish, so long as they are predatory fish that prey on other fish, set up on structure and relate to current. Fishing for river species taught me that, and it has helped me tremendously fishing in tournaments,” Clausen said. “You see parallels between bass and all of these other species, and it really helps me get better at using my equipment and seeing how fish respond to different scenarios. For example, if there is sunlight in the winter, the walleye will lift off the bottom and react to bait, just like smallmouth will when it is sunny in the summertime. Also, how fish respond to barometric pressures and weather patterns is a big help. A fish is still a fish.”

Conversely, Clausen has learned things while bass fishing he has applied to fishing for other species.

“One thing about bass anglers is how open-minded we are,” he said. “Sometimes people targeting other species just chalk up a bad day of fishing to a ‘the-fish-weren’t-biting-today’ type of mindset. The live scoring system of Major League Fishing is a good indicator that fish are almost always biting somewhere for someone who’s probably being open-minded with their fishing.

“Bass anglers tend to try new, experimental things,” Clausen added. “There’s a lot more trial and error involved, from trying different baits and techniques to using different retrieves. In my opinion, anglers who say ‘they weren’t biting today’ tend to be stuck in the mindset of using the same old, tried-and-true techniques and baits. The more tournaments you fish, the more you realize the fish are always biting somehow.

“This phenomenon of ‘there’s always a way to catch fish’ is one way that innovation and trends in bass fishing come about, and why bass fishing is such a driver in the fishing industry.”

Clausen is one of 80 anglers competing on the MLF Bass Pro Tour, which utilizes a unique, live scoring system called SCORETRACKER™. The anglers’ catches are recorded and logged in real time. Officials in the boat log the species (smallmouth, largemouth or spotted bass), weight, bait used, area of the fishery, cover present, water depth and time for each catch. It is very insightful information for fishing fans to learn and spot trends.

For example, Clausen’s SCORETRACKER from the Championship Round of REDCREST showed he caught all eight of his scorable bass on a medium-running crankbait in the middle section of Grand Lake, around a variety of cover (riprap, stumps, boat docks, natural rock). His last fish, a 4-pound, 2-ounce largemouth, was caught at 3:58 p.m., just two minutes before the end of the round.

Lane registered his final fish at 3:57 p.m., nearly simultaneous to Clausen’s, and when the system logged Lane’s fish, he wound up atop the standings.

So Close to Being the First and Only

Coming close to winning RECREST has intensified Clausen’s desire to earn another championship.

“There were a lot of highs and lows at the end of REDCREST,” he said. “I went from thinking I wasn’t going to win to thinking that I did, then back to losing again. I guess it does prove that the fish are always biting somewhere, and we certainly saw that in those final minutes.”

Had he prevailed, Clausen would have become the first angler to win the trifecta of a B.A.S.S., FLW and MLF championship. As mentioned, only five anglers have ever won the Classic and Cup, and Clausen is the only one currently eligible to fish REDCREST (the FLW Cup has since been shuttered).

That fact alone reinforces Clausen’s adaptability and knack for doing whatever it takes to catch fish and succeed on whatever tournament trail, tournament format or body of water he’s competing on during that particular day, week and season.

The Classic victory came on Florida’s Lake Toho, and the FLW Cup triumph on Lake Logan Martin in Alabama. The runner-up finish at REDCREST occurred on Oklahoma’s Grand Lake. All three are different styles of bass fisheries, and the tournaments were held at different times of the year.

Clausen can’t help but think about the opportunity to be the only angler to achieve victory in all three.

“Winning any event is always a goal, but winning REDCREST would be my main goal to accomplish during my career,” he said. “I really don’t have a preference for where the next REDCREST will be held (as of this writing, it remains a secret). Any place that I don’t have much history on will force me to fish without any preconceived ideas and would be great.

“More than anything, it (almost winning REDCREST) reaffirms my opinion that there is no substitute for following your gut, but it can be challenging to listen to that little voice when there is so much on the line.”

Hank Parker: A Bass Fishing Icon for the Ages

Name a sport, and you can bet that its fans, insiders and pundits have argued about who should go on its hypothetical Mount Rushmore. That is, who are the four absolute best or influential people to ever play the game? ...