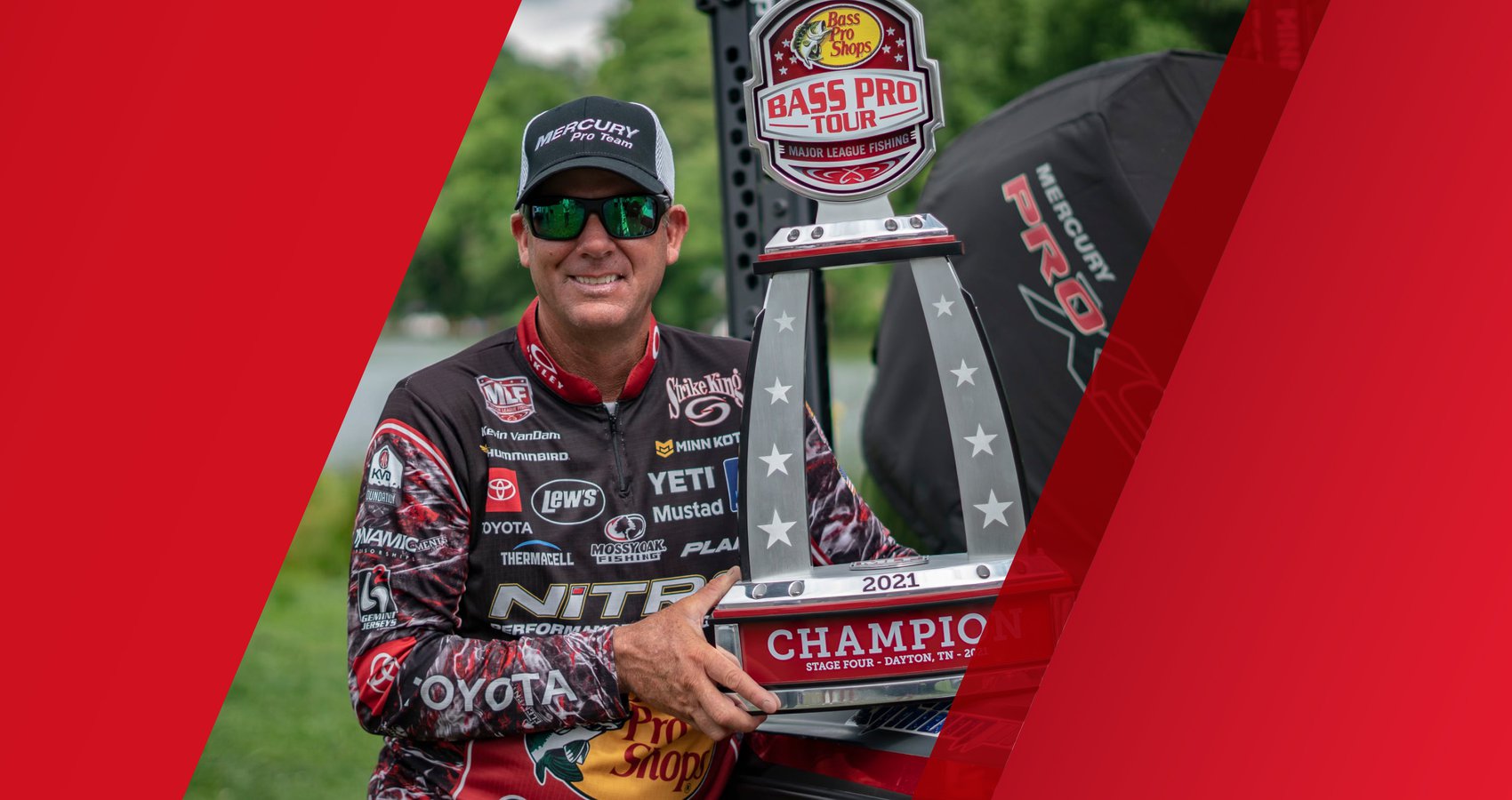 Mercury Pro Team angler Kevin VanDam of Kalamazoo, Michigan, promised that MLF NOW!  live stream viewers would see fireworks in the Championship Round of the Major League Fishing (MLF) Bass Pro Tour event on Lake Chickamauga. The man most consider the G.O.A.T. (Greatest of All Time) of professional bass fishing did not disappoint. VanDam caught 25 bass weighing 70 pounds, 1 ounce to win the tournament, which was held in Dayton, Tennessee, June 3-9. VanDam also earned the top prize of $100,000.

“That last period – to get on a flurry like that – man, that was incredible,” said VanDam, who pushed his career earnings to more than $6.9 million. “Any time you can have that kind of day fishing is special, but to do it on the last day of a Bass Pro Tour event is pretty dang awesome. This (trophy) was something that I’ve really wanted since we started this (tour), so today was a pretty special day for me.”

VanDam earned his victory on Lake Chickamauga doing what he loves to do: fishing deep Tennessee River ledges.

“I found those fish in practice, and when I hit that school, I knew that I’d really found something special,” VanDam said. “I just had to wait for that window when the current gets just right, and when it happened, it was magical.

“I caught fish on a lot of different baits this week, but far and away the Strike King Series 5 (green gizzard) and Strike King 5XD (blue gizzard shad) crankbaits were my money baits all week long,” VanDam continued. “I was fishing the bait real fast and really making the fish react to it, even when they didn’t want to bite.”

VanDam’s career wins have come in many regions and many scenarios, but whenever a tournament lands on the Tennessee River in early summer, he’s a favorite. Interestingly, so are Wheeler, Lambert and Neal. They’re all locals. Yet, VanDam was able to hold them off through diligent prep and execution.

“My confidence was through the roof today (the final day),” VanDam said. “I had all of the tools that I needed. My whole system – my boat, my electronics, my rods, my reels, my hooks – it’s a whole system that I’ve developed over the past 31 years, and I was really able to showcase them today.

“I finished runner-up to (Jacob) Wheeler the last time we were here, so today was really gratifying,” VanDam added. “To go against the field that I did – Wheeler, Jordan (Lee), Michael Neal and Jason Lambert, two Tennessee ledge hammers – and win is just really special. I’ve won a lot of events, and I promise you this: You appreciate every win more than the last because you never know when you’re going to get your next one. And you never know when it could be your last one.”

Mercury Pro Team angler Ott DeFoe of Blaine, Tennessee, finished the event in 17th place and did not qualify for Wednesday’s Championship Round, but his finish was still good enough to overtake the top spot in the Bass Pro Tour Angler of the Year standings. DeFoe’s total of 283 points gives him a 17-point lead over the second-place pro, Mercury Pro Team angler Brent Ehrler (266), with three events remaining in the season. Wheeler is third with 258, followed by Brent Chapman in fourth place with 257. Click here to view the full AOY standings.

The next event for Bass Pro Tour anglers will be the General Tire Stage Five at the St. Lawrence River, June 25-30 in Massena, New York.