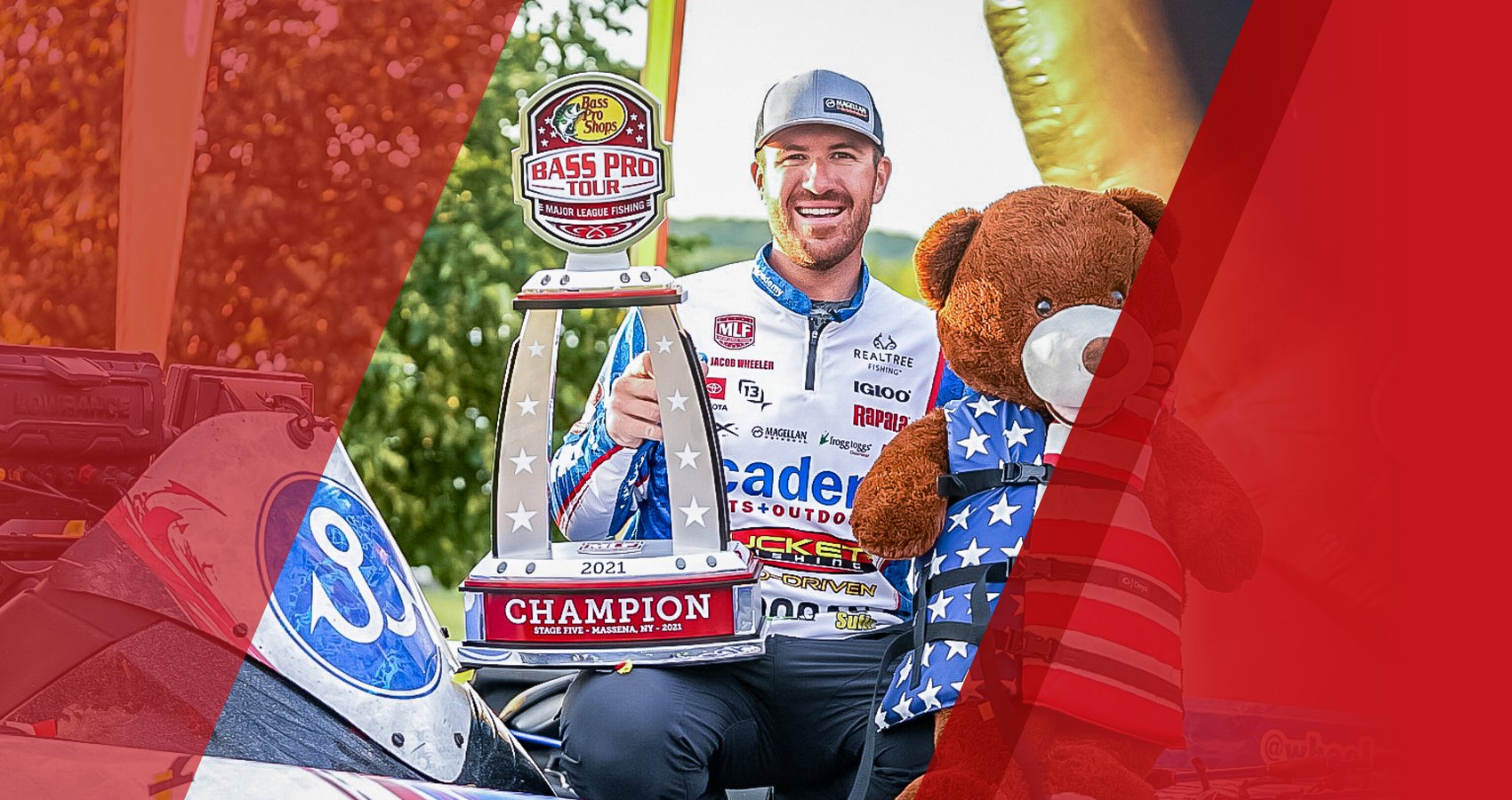 After breaking multiple major weight records for the Major League Fishing (MLF) Bass Pro Tour in the opening rounds of the St. Lawrence River event, Jacob Wheeler, of Harrison, Tennessee, added another accolade to his resume in the Championship Round. Wheeler caught 35 scorable bass weighing 129 pounds even to earn his fourth career Bass Pro Tour victory – the most all-time – and the top prize of $100,000. The event, staged in Massena, New York, was held June 25-30.

Among the Bass Pro Tour records Wheeler set during the week were the heaviest single-day weight (165 pounds, 1 ounce on day one), the heaviest two-day qualifying round weight (222 pounds, 1 ounce) and the most weight ever weighed in a Championship Round (129 pounds). With his latest victory, the 30-year-old pro pushed his career earnings to more than $2.6 million.

“I don’t think I’ve ever won on smallmouth on a natural river system, so this feels unbelievable,” said Wheeler, the No. 1 angler in the BassFan World Rankings.

While the final score might make it seem like it was an easy win for Wheeler, the Tennessee pro found himself in seventh place after a slow start on the final day, with only five smallmouth for 21-8 in the first period. As he prepared to start his afternoon, Wheeler decided to run to an area he found while practicing during his final Qualifying Round a few days prior. He made the trip in his Triton 21 TrX Elite powered by a Mercury 4.6L V8 250hp Pro XS® outboard.

“I was looking for fish in the places that had the most wind because I knew that those areas wouldn’t be fished as much,” Wheeler explained. “I knew that I was going to need to find fish that would be there when I got back in the Championship Round, so I found a spot that was getting beat on by the wind out of the southwest a ton. I knew other guys wouldn’t want to mess with that area because if it was windy like it was, the waves wouldn’t be fun to deal with.

“I’ve been in a handful of situations like this one right here, and there is nothing like a plan coming together perfectly,” Wheeler added. “I cherish every single win, every single top-10. It’s something that you’re never guaranteed, and you have to take a step back and appreciate these moments. This one right here was special. I cannot wait to celebrate with my wife and my little one.”

Mercury Pro Team member Jeff Sprague, of Point, Texas, matched his career-best finish on the Bass Pro Tour with his second-place showing at the event.

“I finished in second, so close once again,” Sprague said in his post-game interview. “One of these days, we’re going to figure out how to win one of these events. But I’m still super excited about my finish this week. We fished extremely hard today. I even ran around this morning and fished new water and tried to make something happen. It was a crazy, amazing week here in New York, and I’m thrilled to bank another top-10 finish.”

On his fishing resume, Wheeler can claim nine career tour-level wins, including a Forrest Wood Cup championship with FLW and a Major League Fishing World Championship. However, a tour-level Angler of the Year title has eluded him to this point in his career. Now, he’s in striking distance with two events left to fish.

“I’m not in the driver’s seat in the AOY race. Ott is,” Wheeler said. “I just need to keep catching bass and try to win the next two events. Even if I win both, it still may not be enough, but I’m going to try. I’d love an AOY win more than anything, but I’m not mad about two wins, a second-place at Stage Four and a third place at REDCREST in 2021.”

A Mercury Sweep of the Bass Pro Tour

Mercury Pro Team members have thus far swept the MLF Bass Pro Tour season. The victory by Wheeler was his second this year (he also won Stage Two at Lake Travis), matching his Mercury teammate DeFoe, who won the first and third Bass Pro Tour events of the season. Other Mercury winners include Kevin VanDam at Bass Pro Tour Stage Four, Dustin Connell at the 2021 REDCREST championship and Alton Jones at the Heavy Hitters event.

The next Bass Pro Tour tournament will be held Aug. 5-10 on Lake Champlain in Plattsburgh, New York.