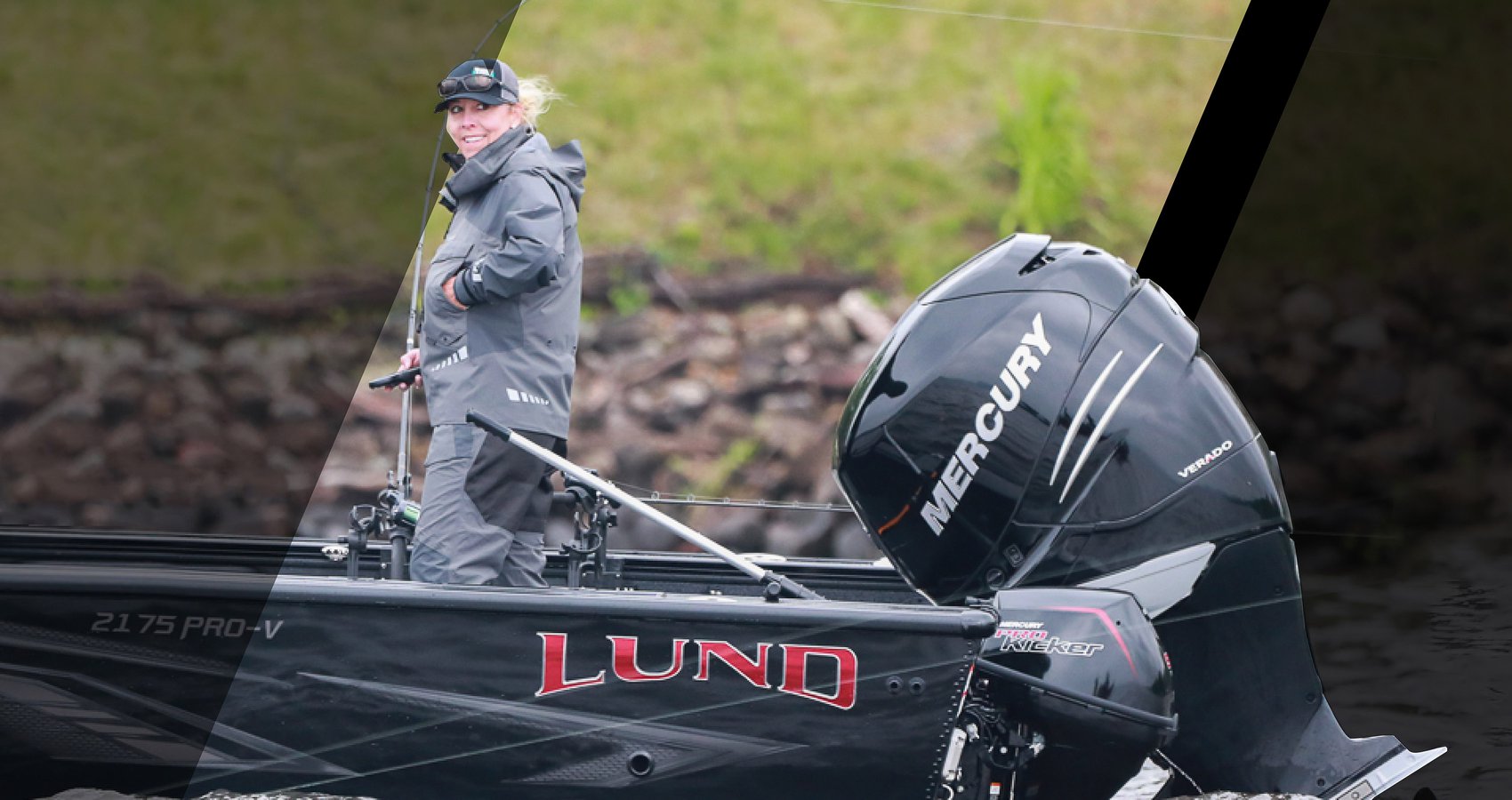 Mercury Pro Team member Marianne Huskey has been blazing trails in the competitive walleye world for a dozen years. While the old adage that the fish don’t know who’s angling for them is true, it’s been historically rare for women to compete at the highest levels of tournament fishing. But overcoming adversity and long odds is nothing new for Huskey, who in 2012 claimed the Anglers Insight Marketing (AIM®) Angler of the Year award. However, her latest achievement at the Head2Head Fishing® Pro Walleye Series may be her most remarkable.

The first-year league features 32 of the nation’s best walleye anglers, and of those 32, Huskey is the only woman. The fourth event of the 2021 season, held July 12-16, took place on Pool 2 of the Mississippi River. With low water levels and a recent mayfly hatch, the walleye fishing on the Mighty Miss was difficult, with several pros likening it to a pitcher’s duel.

When the tournament commenced, Huskey opted to fish a backwater pond, affectionately known as the sunfish hole. The sunfish hole somewhat ironically held a large population of resident walleyes, with a deep basin maxing out at 20 feet. The problem was that this summertime honey hole was nearly impossible to access without the right equipment and some advanced boat control.

“To get into the spot, I had to get a good run at it,” Huskey recalled fondly.

The Wisconsin pro competes from a Lund® 2175 Pro-V with a Mercury® 400hp Verado® outboard. With the boat on plane, Huskey trimmed her engine all the way up to allow the boat to glide through the shallow access point to reach her primary area.

The other issue with Huskey’s program was that she had other competitors nearby. Yet, over two days, she out-fished the others and wound up with the area to herself as the only pro fishing that area who qualified for the Great 8, a three-day bracket-style elimination period. How she got to that point was unconventional, to say the least.

“These were suspending walleyes, and they were hanging near the surface,” she explained. “I started by throwing a 1/4-ounce jig and plastic, and then even downsized to a 1/8-ounce jig.”

Despite having no luck, Huskey knew there were walleyes in the area as she spotted a few, not with her graph, but with the naked eye – a rarity in walleye fishing.

“At that point, I was digging through the tackle box looking for the shallowest crankbaits I could find. I eventually went with a Berkley® Cutter™ tied directly to FireLine® (braided line). I would rip it, and then just let it sit. The pause was long – one thousand one, one thousand two, one thousand three. That got me my first scoreable fish, and then I was able to duplicate it.”

With her eyes glued to her electronics, Huskey noticed that the walleyes shifted deeper – about 3 feet under the surface. She then switched to a Walleye Nation Creations® Shaky Shad crankbait.

“There are gizzard shad in the system, and the profile was almost perfect,” Huskey said. “It’s a tiny little bait, but it has a loud internal rattle, and I think the noise helped in the dirty river. The other boats in the area weren’t catching fish with jigs. I think the key was having the bait there longer (in the top portion of the water column) and more often than the other anglers. I wasn’t moving around; I was casting, casting, casting.”

In bracket competition, Huskey individually bested fellow Mercury Pro Team member Mike Gofron, then veteran pro Paul Meleen and finally young gun Isaac Lakich. In the end, the only woman in the field, which included renowned river rats such as Brett King, Bill Shimota and Jarrad Fluekiger, ended up atop the standings.

“On the Head2Head website, the Mississippi River is labeled under my name as my least favorite body of water,” added Huskey with a snicker. “I understand wing dams and current seams; I just don’t like the Mississippi. It’s small, and I’m a big-water angler. I was never thinking that this was going to happen.”

When time was called on the final afternoon and Huskey was declared victorious, she earned $35,000 and officially became the first woman to win a major walleye tournament.

“At first, I didn’t even realize the historic significance. I was just so focused on what was going on,” she added. “The more I reflect on it, the more I think this is more meaningful than winning Angler of the Year. It’s great when you do it once; it’s a feather in your cap. But when you win a second time, there’s more significance. I think this is a stronger victory, and the exposure I received from this event was unreal. I’ve had so many messages from families telling me that I’ve paved the way or that their daughter loves watching me compete. It’s a big deal. I’m honored, and I’m humbled.”

“Other sports have separate fields based on gender. Even baseball becomes softball, and then rules are tweaked. Basketball uses a smaller ball for girls. When it comes to fishing, it’s all the same. You don’t have a different boat. There are no advantages or disadvantages to being a woman. Fishing is the one professional sport where you can have both (genders) compete together. I think this week just proved it.”