If Korey Sprengel lacks anything in the way of fishing skills, he makes up for it with confidence. It wasn’t always that way, though. 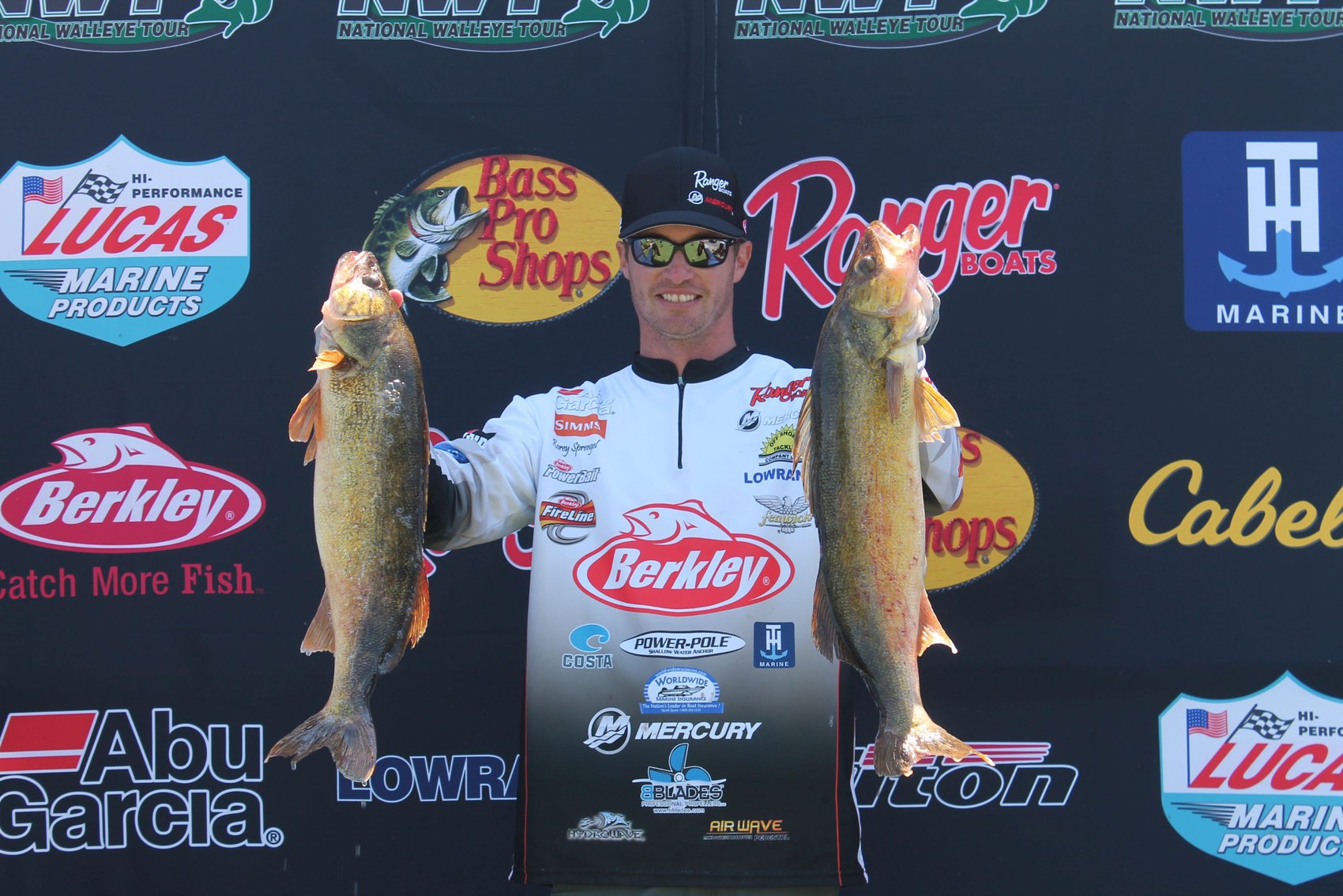 If Korey Sprengel lacks anything in the way of fishing skills, he makes up for it with confidence. It wasn’t always that way, though. Sprengel of Beaver Dam, Wisconsin, has been one of the top competitive walleye anglers in the country since 2012, the year he won the FLW Walleye Tour event on Michigan’s Bays de Noc.

That 2012 season was a pivotal one for Sprengel, not only because he won $50,000 at Bays de Noc to help him quit his job as a mason and become a full-time pro the following season, but because that’s the year the then-24-year-old finally started to trust his fishing instincts. You might say it’s when he found his confidence.

It all came together during a key moment with just two hours left to fish on the third and final day at Bays de Noc, when, still needing one good bite, Sprengel shelved the crawler harnesses he’d been trolling very successfully to that point and clipped on a spread of crankbaits. To switch with so little time was gutsy, but it resulted in Sprengel catching the winning walleye.

Winning that tournament proved to Sprengel that he was ready; that he could make the kinds of tough, on-the-fly decisions that real pros must make in order to stay successful in the long term.

“I started making decisions just based on confidence and gut feeling,” Sprengel said of that event. “It wasn’t stuff I’d learned in practice. It was just based on previous knowledge. That’s when I started to break free and just go fishing in tournaments versus focusing only on what I’d seen in practice. When you start to gain that confidence and trust, you start to put things together on the water.

“Most of the time, a tournament isn’t won based on practice,” he added. “Generally, it’s won based on a decision or adjustment that was made during the tournament.”

With newfound confidence and trust in himself, Sprengel went on a tear. He tallied five pro-level wins from 2012 through 2019 and has never finished outside the top 10 in the National Walleye Tour (NWT) Angler of the Year standings in any of his seven seasons on the trail.

There’s been no drop-off in Sprengel’s performance, including during the 2020 season. Following delays due to the COVID-19 pandemic, the NWT opened its 2020 campaign July 23-24 at Green Bay. Green Bay is Sprengel’s home fishery, and he dominated the event from start to finish with a 42.13-pound limit on day one followed by 35.35 pounds on day two for a total weight of 77.48 pounds. The Mercury Pro Team angler earned a $92,130 prize package that includes a new Ranger 620FS PRO with a Mercury 250hp Pro XS engine.

At Green Bay, Sprengel’s confidence and decision-making were on display. Due to a cold front and persistent northeast winds that pushed chilly water into the bay, Sprengel made the decision to limit his practice time. Instead of overpreparing, like he admits he would’ve done when he was just starting out, Sprengel anticipated changing patterns and wagered on his ability to figure out the puzzle during tournament hours.

“I have a lot of confidence in this bay,” he said. “A lot of it isn’t so much about spots. It’s about understanding how the currents are working and water temps and things like that.

“I’d pre-fished before the tournament, but as the tournament started getting closer, the forecast for the wind was just horrible – a north wind and cold front. That north wind brought a lot of cold water down and dropped the water temperature 15 to 20 degrees. I knew at that point a lot of what I was going to figure out in practice wasn’t going to matter. It was all going to change in the tournament.”

Sprengel spent the day before the event resting and making final preparations, such as tightening the hardware on his Ranger 621FS PRO. When he cranked his Mercury 400hp Verado on the opening morning and planed off into the teeth of the wind, Sprengel had no specific waypoint in mind and no pattern. Instead, he ran 40 miles to a boulder-strewn pocket on the lee side of an island where he suspected he’d find warmer water and a break from the wind-driven currents that he says usually dictate walleye patterns on Green Bay.

It only took a few trolling passes with his crawler harnesses to prove his hunch right.

“That’s where I got the first bite,” he said. “That fish bit three times. I kept feeding it, I missed it and it came back again after maybe a 10-second delay. It only ended up being a 20-incher, but I knew right away that if that fish bit three times it was going to be right. From there, it continuously got better. I got one fish every pass. Then we were doubling; then tripling. That spot only ended up being 3 degrees warmer, but that’s all it took. There was literally only a 100-yard stretch where I could get them to bite.”

Tournament regulations restricted each boat – with a pro and co-angler sharing fish weight – to six fish in possession and no culling. Anglers could weigh their best five at the scale. After catching three fish that all weighed more than 6 pounds, including a 9 1/2-pounder, Sprengel saw an opportunity. Instead of shooting for his initial goal of 35 pounds, he raised the bar. He started throwing back quality fish that normally would go in the livewell in an event plagued by a cold front and challenging conditions. Even his co-angler that first morning questioned Sprengel’s call, but bold decisions stem from confidence and experience, and the walleyes proved Sprengel right once again.

“I told my co-angler, ‘We can make mistakes with that 9 1/2-pounder in there,’” he said. “’The fish are biting, we’re catching them and we can keep going.’ I knew if there was an opportunity, I was going for it. It’s Green Bay. There’s a possibility for 45-pound bags.”

Though he never hit the 45-pound mark, Sprengel’s call to throttle down earned him a commanding lead of more than 8 pounds on day one. By the end of the event, his two-day total was more than 17 pounds heavier than the runner-up angler’s.

It was an impressive performance and a sign that Sprengel’s success isn’t likely to taper off anytime soon. Eight years after his first major win, he’s as confident as he’s ever been, living out his life and career as a professional angler.

“A lot of that confidence comes from time on the water,” he added. “I just live for fishing. Ice fishing or summer fishing, I’m constantly on the water.”

Mercury Pro Team member Marianne Huskey has been blazing trails in the competitive walleye world for a dozen years. While the old adage that the fish don’t know who’s angling for them is true, it’s been historically rare for women ...

Mercury Pro Team member Chase Parsons says there’s just something about the Missouri River system – particularly in South Dakota – that he likes. And it’s pretty easy to see why. In 2011, Parsons, of Denmark, Wisconsin, earned his first ...