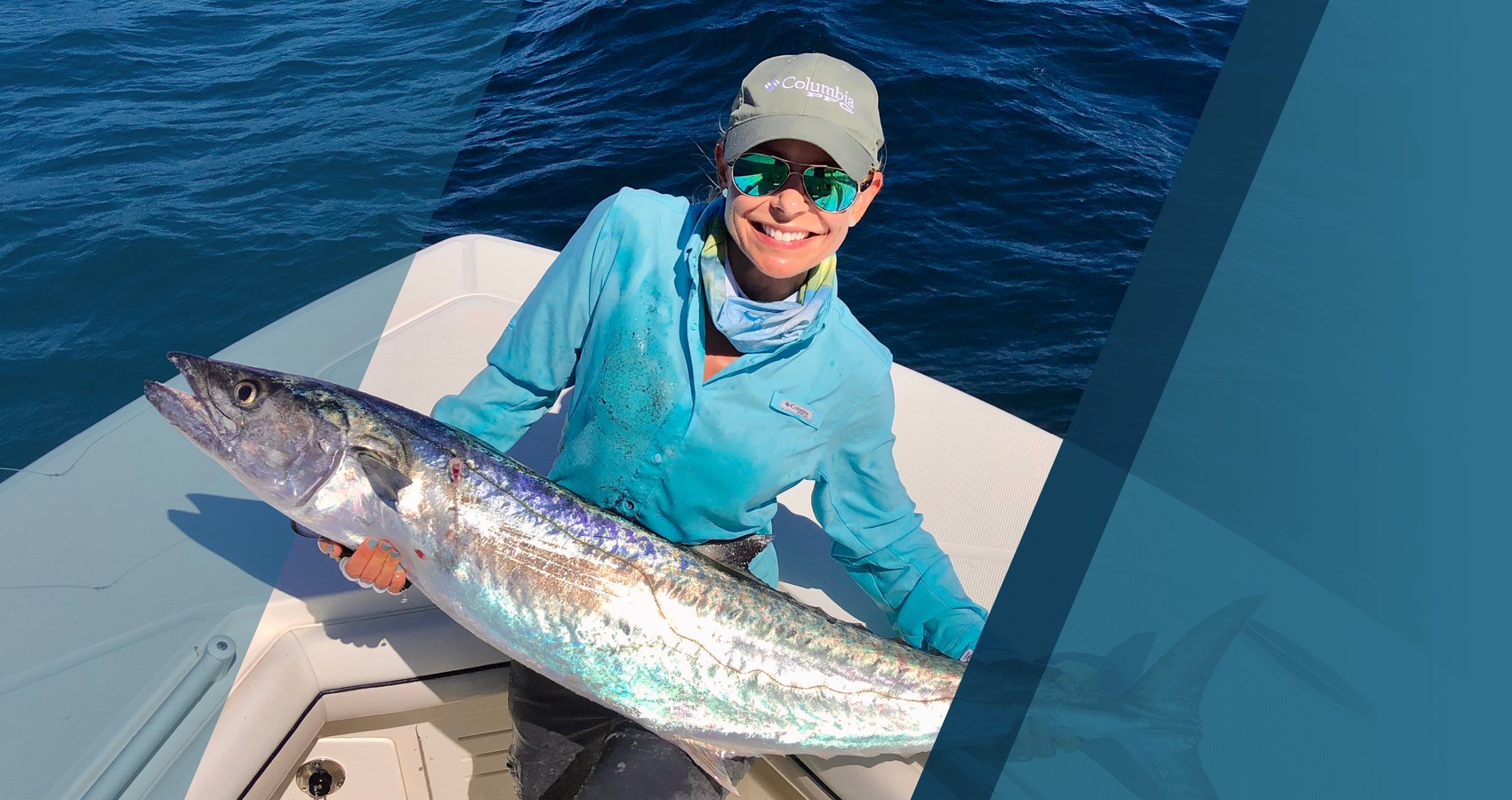 Living an extraordinary life often requires extraordinary hustle and determination, especially if it’s a life you never set out to live.

Capt. Debbie Hanson didn’t grow up dreaming of being a licensed captain and respected fishing guide, but that’s where she finds herself. And for most of her life she never saw herself as a fishing advocate, dedicated to empowering and enfranchising women to take up the sport, but that’s exactly what she’s doing today, and doing it at the highest level.

While it’s true that some of the events that put her on the path to success were fortuitous, the success itself and the extraordinary life that she has were most certainly hard-earned. 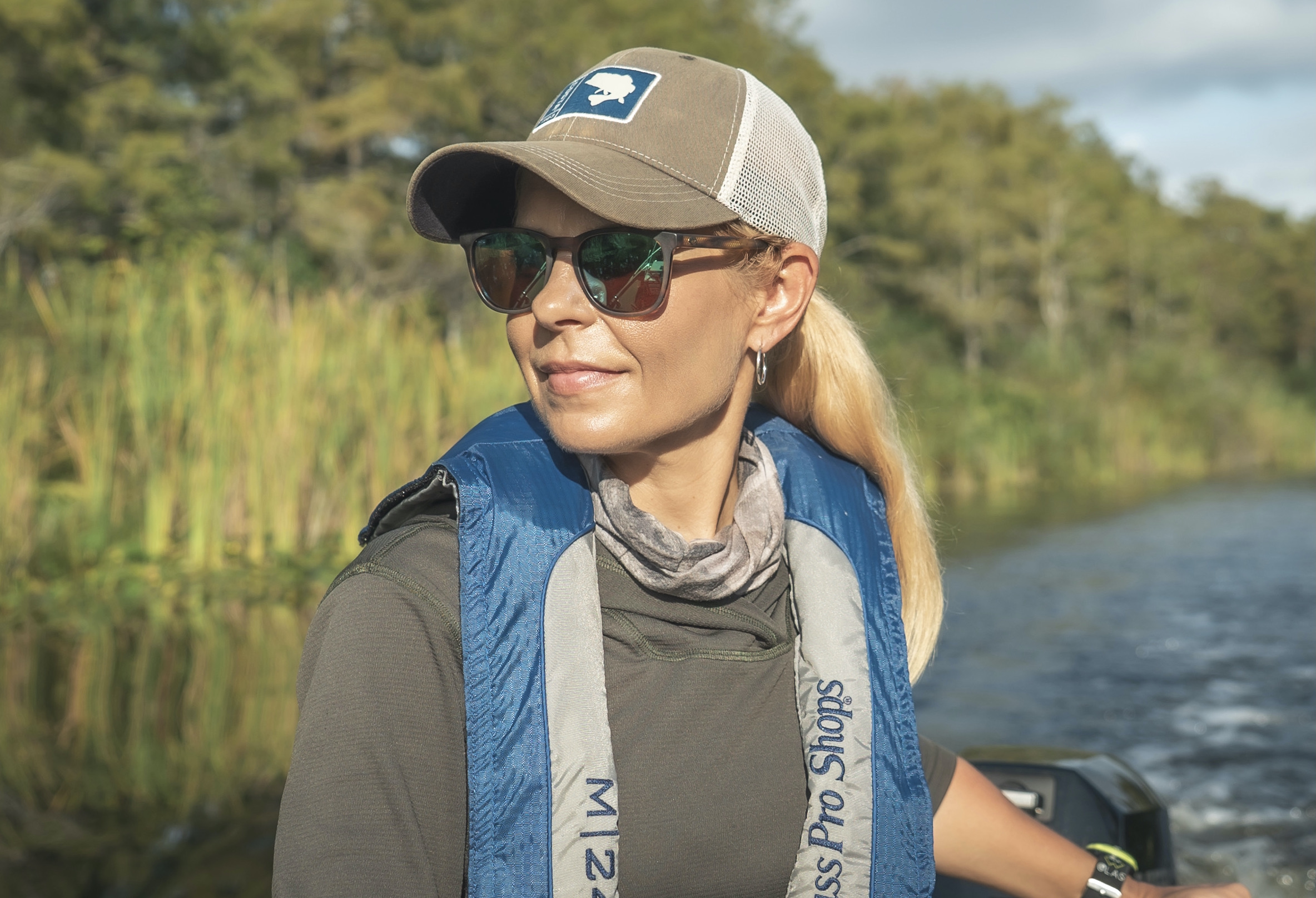 Hanson was raised in Illinois, but spent summers with her grandparents near Iron River, a small town in Michigan’s Upper Peninsula. She started fishing when she was 5 years old, chasing bass and panfish with her grandfather on Stanley Lake. She grew up with a love of the outdoors, with a strong work ethic and with resilience that’s prevalent with people who spend time in that beautiful yet unforgiving region. After obtaining an English degree from Western Illinois University, she started working at an advertising agency in downtown Chicago, and her traditional corporate career was off and running.

But life often doesn’t follow a straight line, and in 1999, life circumstances eventually led Hanson to relocate to southwest Florida where she could enjoy fishing, boating, hiking and exercising outdoors year-round. She started selling online advertising for a digital marketing firm, and life in her new homeland was good. The next year, eager to learn more about saltwater fishing, she took part in a Ladies, Let’s Go Fishing seminar, not knowing that it would be the start of her journey to a completely different life than she’d ever imagined.

Founded in 1997 by Betty Bauman of Fort Lauderdale, Florida, Ladies, Let’s Go Fishing (LLGF) is a series of fishing seminars held around the state each year in conjunction with the Florida Fish and Wildlife Conservation Commission. LLGF was founded specifically to address the lack of opportunity for women to learn fishing and conservation skills in the state and has since helped thousands of women gain a greater knowledge of fishing. The typical LLGF seminar consists of a day of demonstrations, skill building and speakers, followed by a day of fishing. 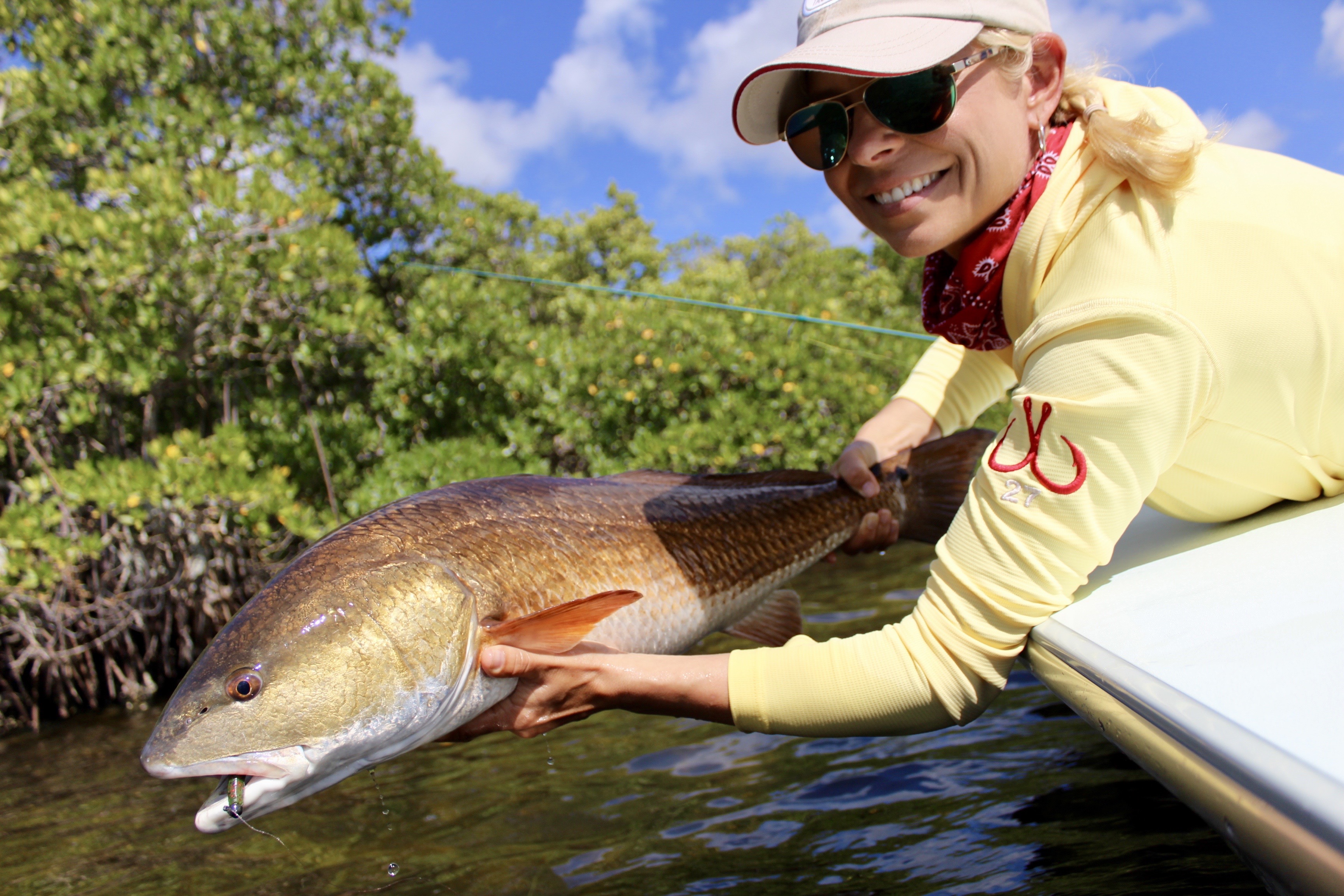 “I had come down to Florida, and I had just a little bit of saltwater experience with guides and friends,  but I wanted to become more self-sufficient and knowledgeable about saltwater fishing,” Hanson said. “I had a freshwater background from being a kid, learning from my grandpa. So this was just a great way to connect with other ladies and learn more about the saltwater side of the fishing world, which turned out to be fantastic. I made some wonderful connections with women as a result of attending that seminar. Some of those ladies I'm still friends with 20 years later.”

From then on, Hanson worked to develop her saltwater skills, while continuing to build her freshwater bona fides as well – all recreationally while still working in online advertising. But then a family crisis about 10 years ago gave her a wake-up call that would make her re-evaluate her career and priorities.

“Both my parents were diagnosed with different cancers,” she said. “They worked so hard at jobs that maybe they didn’t love so much, but they were really loyal and dedicated to building their careers. To watch them unfortunately not be able to do a lot of the things that they wanted to do in retirement because of medical issues they were going through brought about an awakening in me, and I decided to change careers.

“Being in online advertising, I was seeing a lot of people who were blogging about their passions. So I decided to start a blog to serve as a resource for women who are looking for fishing information online. I thought, ‘Why not start something where women could go and feel supported and feel like they had a special online resource for fishing that was dedicated to them?’”

The blog – today located at shefishes2.com – caught the attention of takemefishing.org, a grassroots initiative of the nonprofit Recreational Boating & Fishing Foundation, and she was asked to start writing for their site as well. Her building body of work led to writing assignments from other sites and publications also. 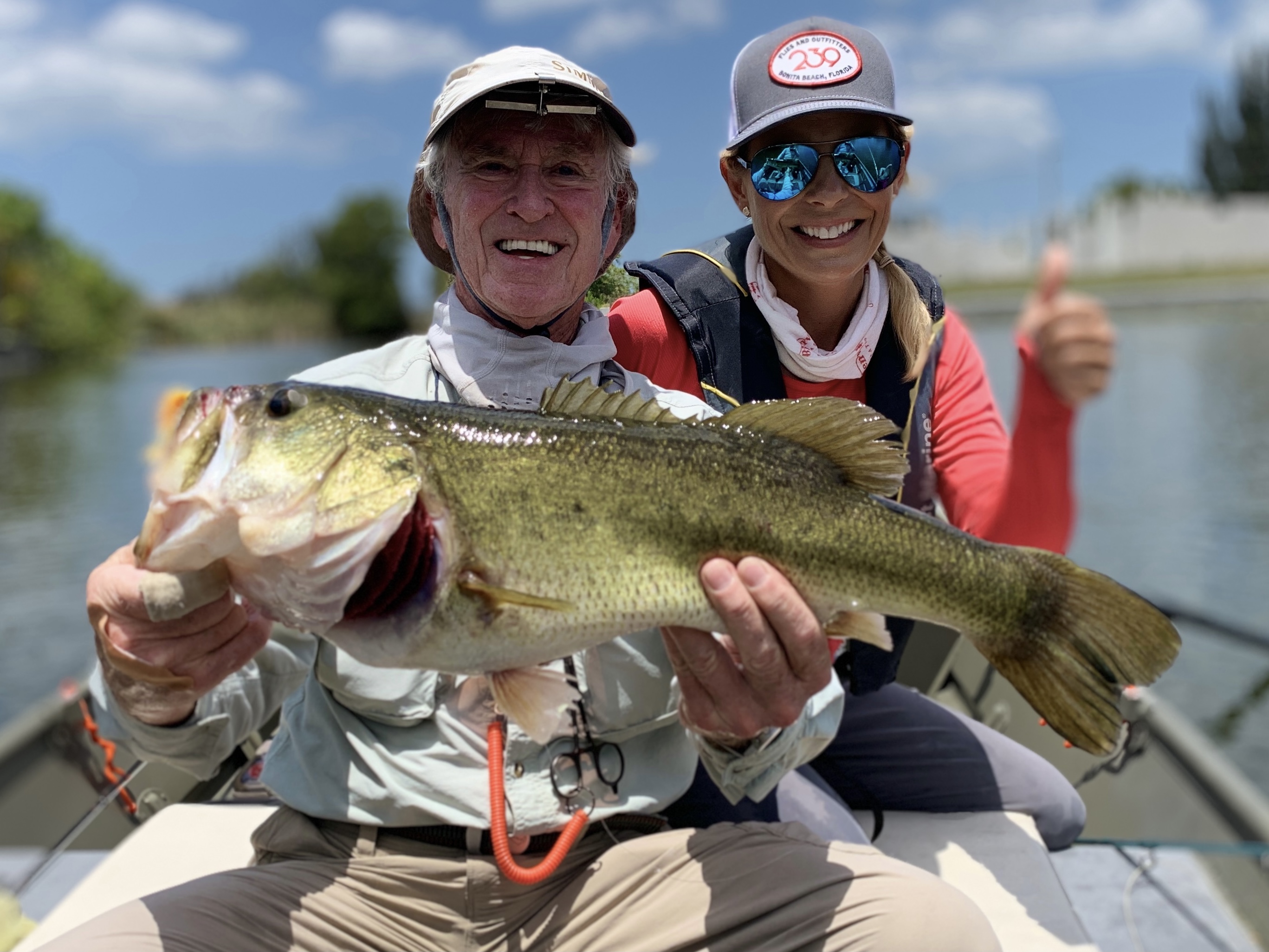 In 2018, at the urging of friends and fellow anglers, Hanson earned her captain’s license and now books approximately 100 freshwater charters per year, principally targeting largemouth and peacock bass. Her clientele is roughly equally divided among women, men and couples, but she especially enjoys the occasional opportunity to guide mother-daughter duos.

“It’s wonderful to see,” she said. “It’s so encouraging to see moms passing on a love of fishing to their daughters. It used to be mainly grandpa or dad that would take the kids out, but now we’re seeing a lot more moms that are taking their kids out and introducing them to the sport. It’s great to see moms setting that strong example and a love of the outdoors and passing it down to the next generation.

“When anglers are introduced to the sport at a young age and feel supported, they're much more likely to stick with it throughout the course of their lifetime. So I think for any newcomer it's important that they find that sense of camaraderie and that, for example, when women are getting out there they have other women to fish with.” 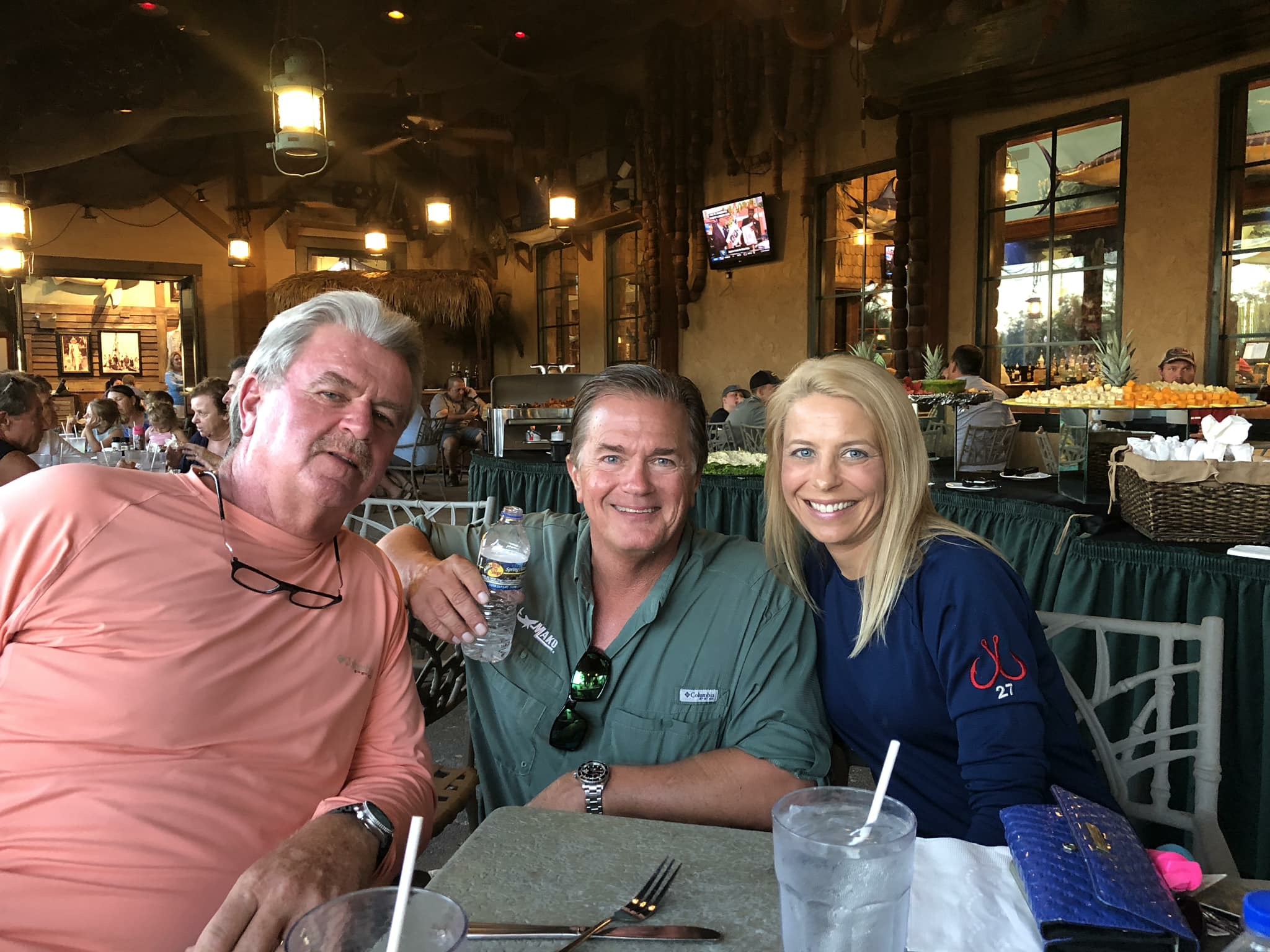 In 2018, she caught the attention of none other than saltwater legend and Mercury Pro Team member George Poveromo, who was looking for a guest panelist for the Fort Myers edition of the Salt Water Sportsman National Seminar Series.

“I was trying to find a female angler from the area to serve on the panel, so I put a wide search out, and a lot of the roads led back to Debbie Hanson,” Poveromo said. “Anyway, I looked her up, and I saw that she did a lot of freshwater fishing and some inshore saltwater. So I called her up and had a talk with her. During the call, I'm getting the feel for her personality, but also sort of feeling her out on her skill level to see if she really knows what she’s talking about – asking about some of her techniques and things like that. I do this with a lot of the prospective faculty members that I don't know before I bring them on board to make sure they’re worthy of being up on stage. I have to do that to make sure they can walk the walk. I was impressed; she came across as very, very knowledgeable.”

Hanson accepted Poveromo’s invitation to serve on the panel, and “she handled herself brilliantly,” Poveromo said. “She had solid information about where to find fish locally, great tackle tips, and she was really forthcoming and knowledgeable.” 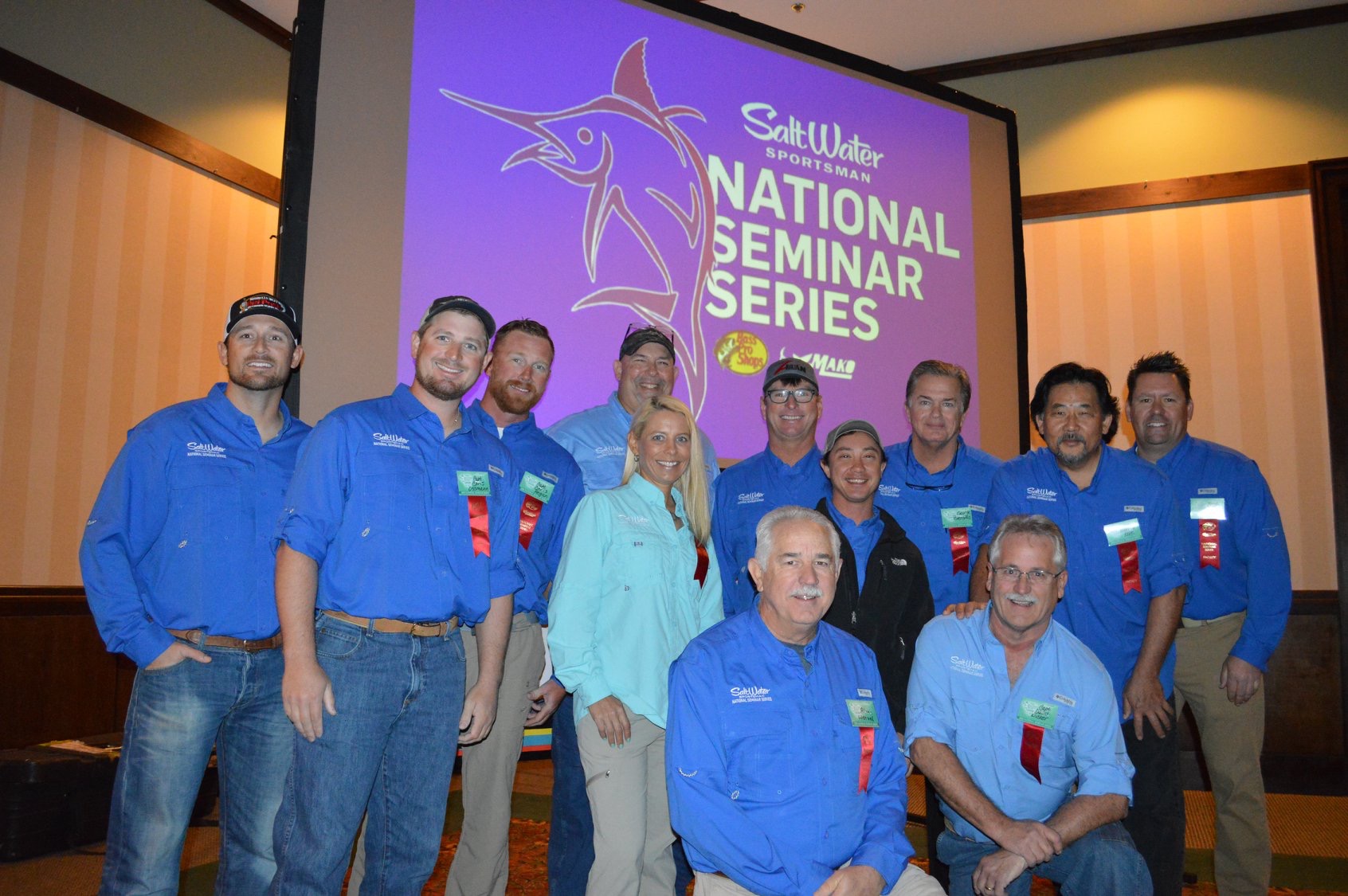 Hanson made such an impression that she’s been part of the seminar series ever since. Her performance at the seminars also led Poveromo to extend her an invitation to be a featured guest on his television show, “George Poveromo’s World of Saltwater Fishing,” in 2019. The episode was filmed on the waters surrounding Treasure Cay, Bahamas, and it culminated with Hanson reeling in a nice white marlin – her first ever.

Hanson lists Poveromo – along with her grandfather and Betty Bauman – as a mentor, and the two talk or exchange texts almost every week. Poveromo is unabashedly a fan of Hanson’s as well.

“She is without a doubt a leading educator and is steering more female anglers into the sport of fishing,” he said. “She is not only a great role model, but also an educator and advocate in terms of hyping people up and showing them the excitement of getting involved in fishing, as well as providing a lot of the how-to instruction. She makes it easier for less-experienced anglers to jump into it.”

Hanson lives in Estero, Florida, with her husband of six years, saltwater guide Capt. Greg Stamper. And she’s still got the hustle: When she’s not guiding, writing, filming a vlog or putting on a seminar, she can be found teaching spin (cycling) classes at a local gym. But make no mistake, her passion remains achieving even greater mastery of fishing and helping other women learn and embrace the sport.

“We're all concerned about how we're going to be perceived by our peers, but when women are on a boat together and learning something new, it can be a less-intimidating experience,” Hanson said. “It's the same reason why I think Betty's (Ladies, Let’s Go Fishing) seminars have been so successful: Any question is a good question, and we're all learning along the way – even those of us who have been fishing for decades.

“It's about finding the right resources, surrounding yourself with other supportive anglers and learning something new every time you're out on the water.”