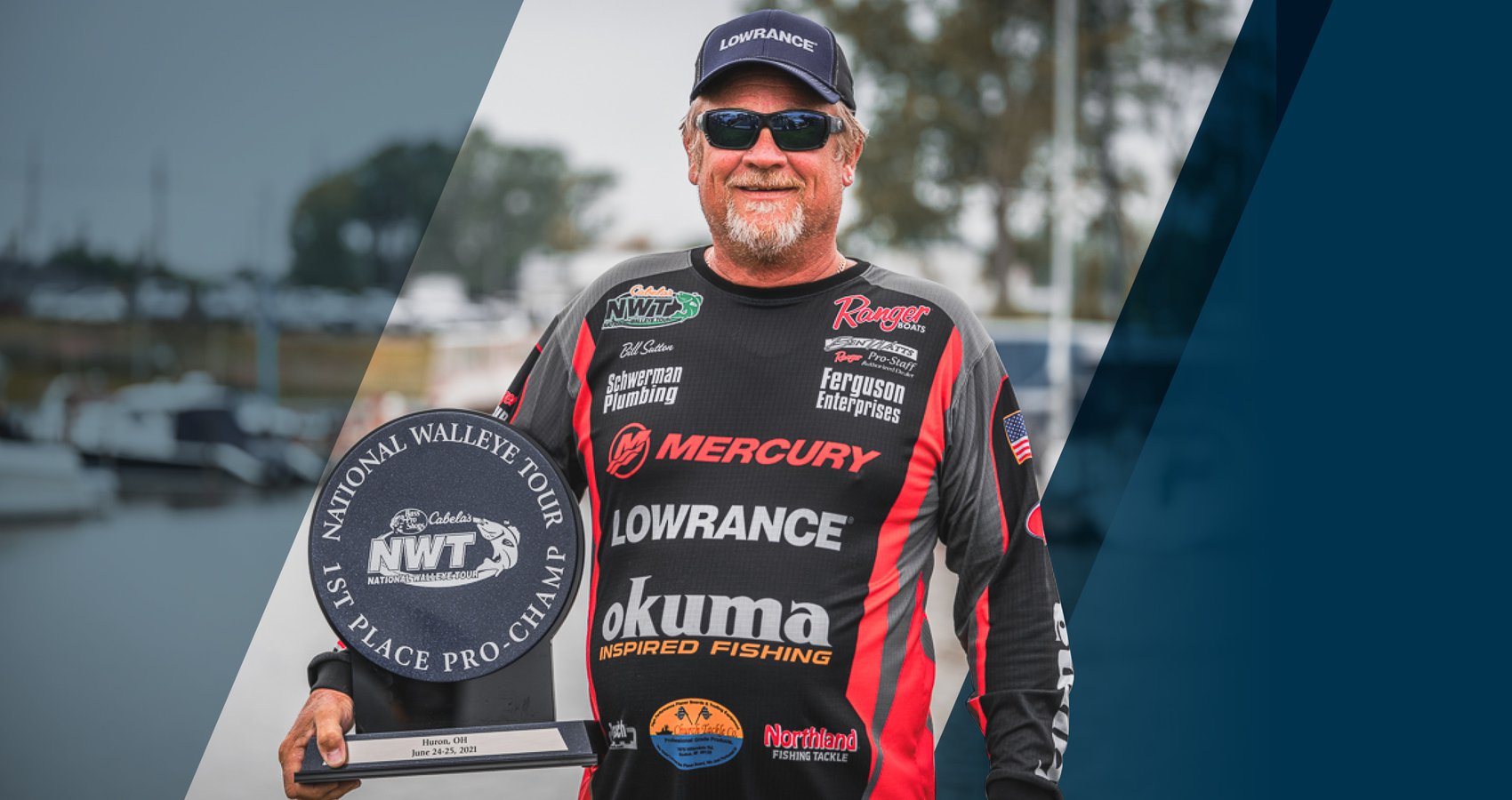 Tournament fishing, especially at the highest levels, often is a game of risk versus reward. Heading into the third National Walleye Tour® (NWT) event of the 2021 season, held June 24-25 out of Huron, Ohio, most pros knew the bigger Lake Erie walleyes were migrating east as they followed baitfish out to deeper, cooler water. The drawback is boat travel on Lake Erie is incredibly time consuming and, in some instances, can be treacherous in the windswept waters.

With favorable weather conditions the first morning of the tournament, Mercury Pro Team member Bill Sutton made a bold decision, opting to run 80 miles east of Huron to an area he’d never fished before.

“The key for this one was trusting my teammates,” said Sutton, who also won an NWT event in 2015 on the Mississippi River. “I went to an area that I had only seen on my Lowrance® units. Not only did it carry a heck of a fuel bill, but points for the championship were on the line, too. I have to give a lot of credit to Matt Kleis and Brian Chandler (his teammates), who found the spot. I wasn’t worried about my equipment in the least. The only thing I questioned was whether my body could handle it.”

After running 55 miles, Sutton would opt to fuel up in the morning rather than waiting until he was headed back, knowing the afternoon weather could be unpredictable, and that every minute was crucial for the return trip.

“With the fuel stop, it took about an hour and 45 minutes on the way there,” he recalled. “Coming home I was allowing over two hours.”

The wind and waves did kick up in the afternoons, especially on the second day. At times, the strong southerly winds created 3- and 4-foot swells.

“The conditions were not easy,” added the 57-year-old Sutton. “The southern winds were pounding us pretty good, but my Ranger 621 and 350hp Mercury Verado® outboard handled them beautifully.”

The long runs cut Sutton’s fishing time nearly in half, but the risk was worth it. With 10 minutes of fishing time left the first day, the Salem, Wisconsin, angler landed a 28-inch walleye that put him in the top 10 with a limit worth 26.20 pounds. On day two, he caught a 30-incher and a 31-incher before noon, but he was anxious in the morning.

“The first three fish were rapid fire, but all were under the 15-inch mark,” he said. “That made me extremely nervous. I was almost in panic mode. After the second big fish, I decided I wasn’t leaving in the last little bit of time I had. We (Sutton and his co-angler) ended up upgrading two of my three smaller fish, but I still didn’t think it was enough. I figured I needed that third big fish. Low and behold, I didn’t.”

Sutton’s official day-two weight for five walleyes was 29.62 pounds, giving him a tournament total of 55.82 pounds.

His winning program was trolling crankbaits over a deep trench. Sutton kept his trolling speed at 2.8 to 3 mph. With either a Luhr-Jensen® Dipsy Diver® or 2-ounce snap weight on each line, he was able to troll his crankbaits down 24 feet over water that was between 38 and 42 feet deep.

“I was using the kicker for propulsion, but the electric trolling motor on the front for steering,” Sutton added. “I was also using the Power-Pole® Drift Paddle® to help me steer. It was all three at once to stay on the contour. With the kicker, I would get my speed up to 2.5 or 2.6. Then I would fire up the front electric (motor) and dial it up that last little bit. There were times I would have to increase or decrease the speed on my kicker. I keep one of my Lowrances in the back for that reason – so I can get that speed dialed. I’m always looking at my Lowrance while I’m on the kicker.”

For his second NWT win, Sutton earned a Ranger Boats® 620FS Pro with a Mercury 250hp outboard plus more than $17,000 in cash prizes, for a total purse worth more than $93,000. More importantly, he proved once again that he has the skills to win at the highest level in the ever-evolving sport of competitive walleye fishing.

“After a while, I felt like the first one was kind of a fluke,” said Sutton of his first win. “In 2016, I finished high in the points standings, but after that, I started second-guessing myself and my fishing career, if you will. To come out and compete with these guys and then come out on top, that’s what feels the best. Knowing I can compete with this younger generation is gratifying.”

Mercury Pro Team member Marianne Huskey has been blazing trails in the competitive walleye world for a dozen years. While the old adage that the fish don’t know who’s angling for them is true, it’s been historically rare for women ...

Mercury Pro Team member Chase Parsons says there’s just something about the Missouri River system – particularly in South Dakota – that he likes. And it’s pretty easy to see why. In 2011, Parsons, of Denmark, Wisconsin, earned his first ...