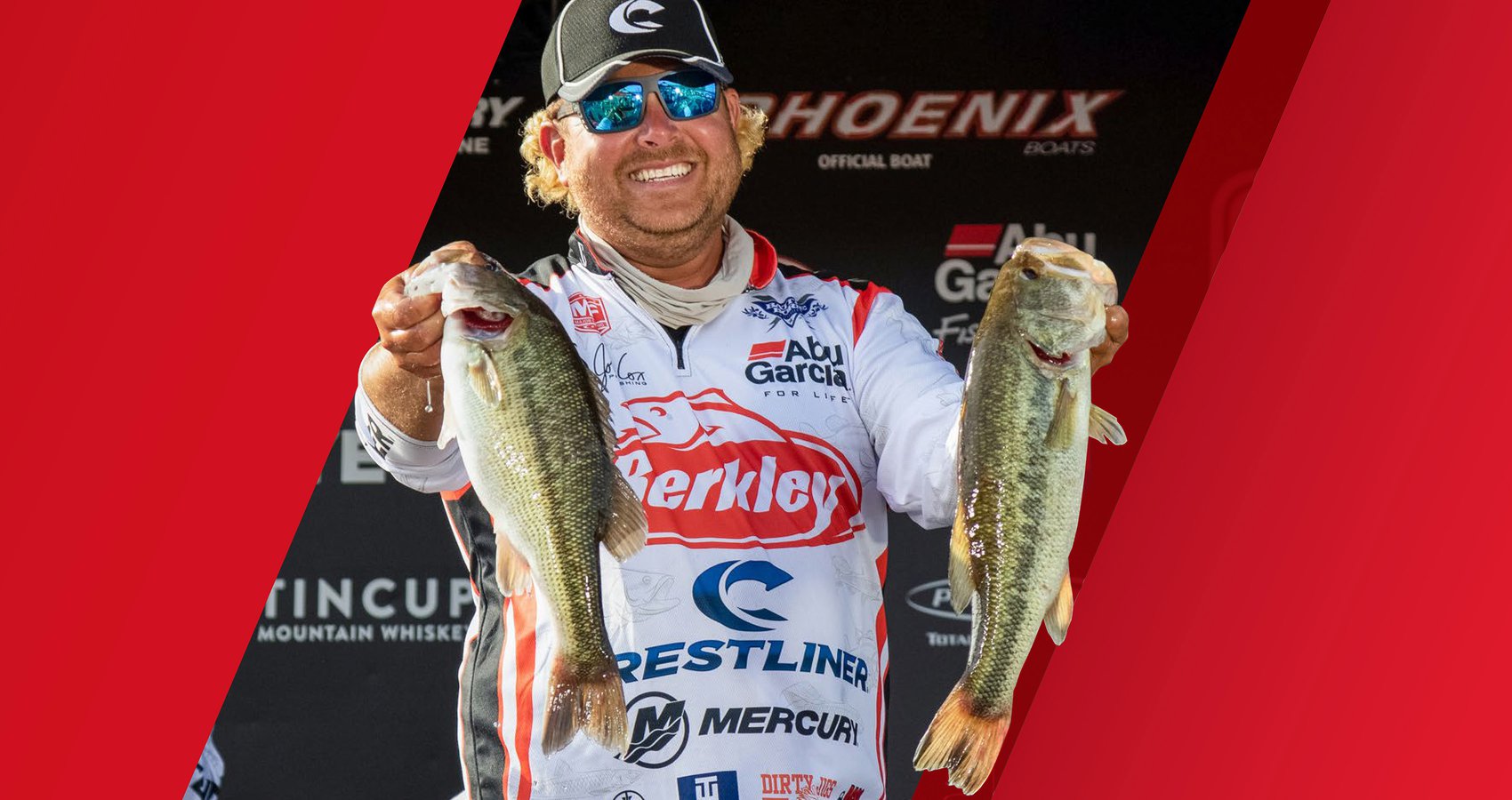 No professional bass angler is fishing more events with a $100,000 top prize this season than John Cox of DeBary, Florida. Cox is one of only 20 anglers competing on both the Major League Fishing (MLF) Bass Pro Tour and MLF Tackle Warehouse Pro Circuit. And he’s the only one fishing both MLF circuits plus the Bassmaster Elite Series. Cox’s commitment to high-stakes competition paid off on Sunday, March 14, when the Mercury Pro Team angler won one of those $100,000 tournaments – Pro Circuit Stop 2 on Lewis Smith Lake in Cullman, Alabama. 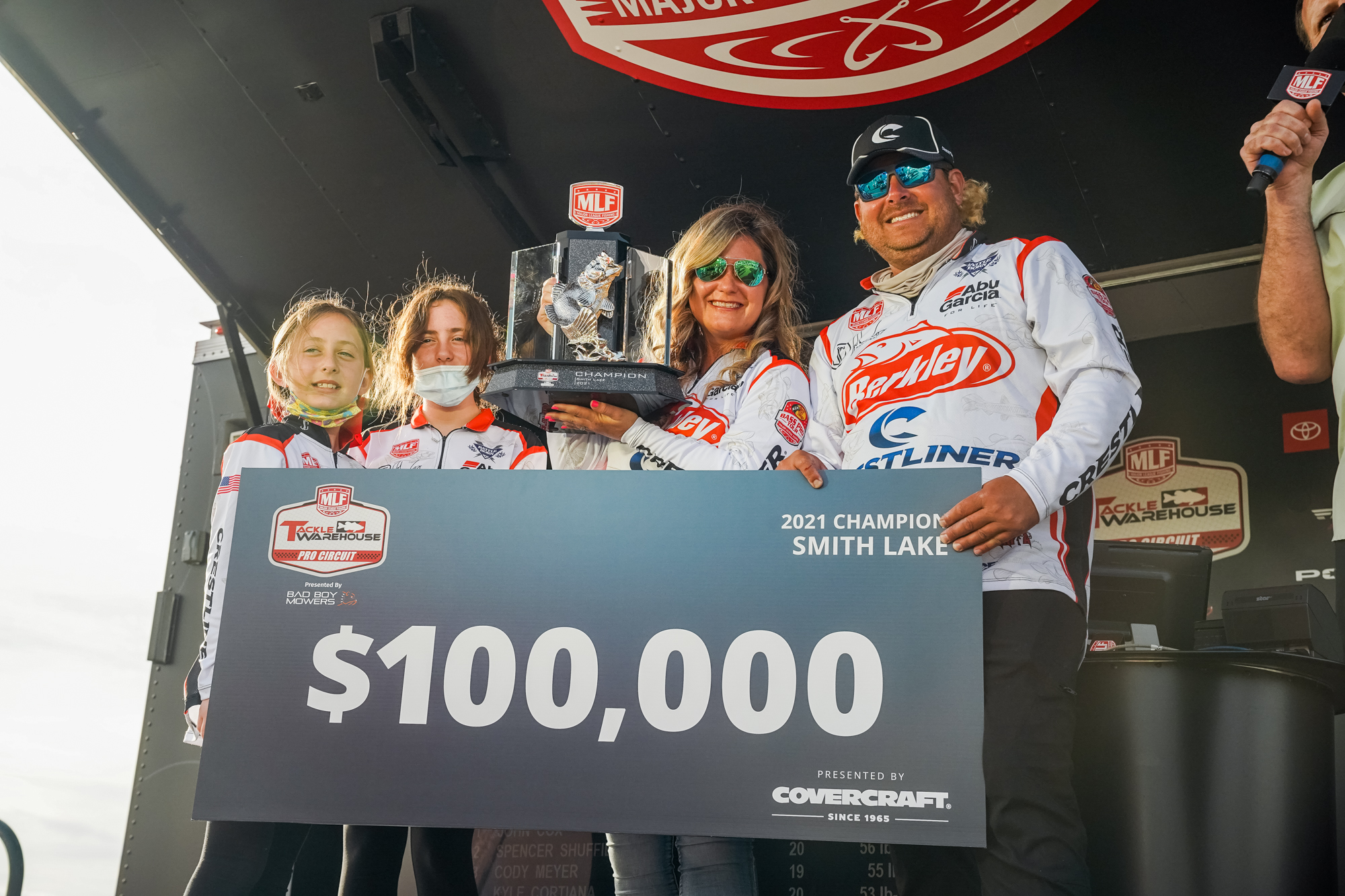 Cox took over the lead on day two then sealed it with 16 pounds, 10 ounces on the final day. His four-day total of 62 pounds, 4 ounces earned him the win by more than 5 pounds. It was an impressive performance, woven into the early stages of what might wind up being one of the most impressive seasons of Cox’s career.

Fishing from One Event to the Next

On Monday following the Lewis Smith event, Cox fulfilled the requisite post-tournament video interviews and filming session following an MLF win and then hopped in his truck to pull his Crestliner rig to his next tournament, the Bassmaster Elite Series event on Pickwick Lake in Florence, Alabama. He arrived in time to get in a few hours of practice during the first of three official practice days.

Making the short 70-mile trip from Smith Lake to Pickwick and arriving in time to practice might end up seeming relatively easy and laid back compared to several of the mad dashes Cox will make in 2021 to pull off this three-tour season as best as he can.

“Getting nearly three days of practice for this one will be nice,” he said from behind the wheel. “But, I’m kind of looking forward to the ones where I will just show up and fish without practice.”

Competing without practice fits Cox’s style. Always relaxed, the Florida pro is at his best when he’s figuring out a fishing pattern on the fly. He’ll certainly have opportunities to do so this season. Fishing all three tours is an undertaking never attempted in professional fishing, and conflicting schedules will make the logistics challenging at times. 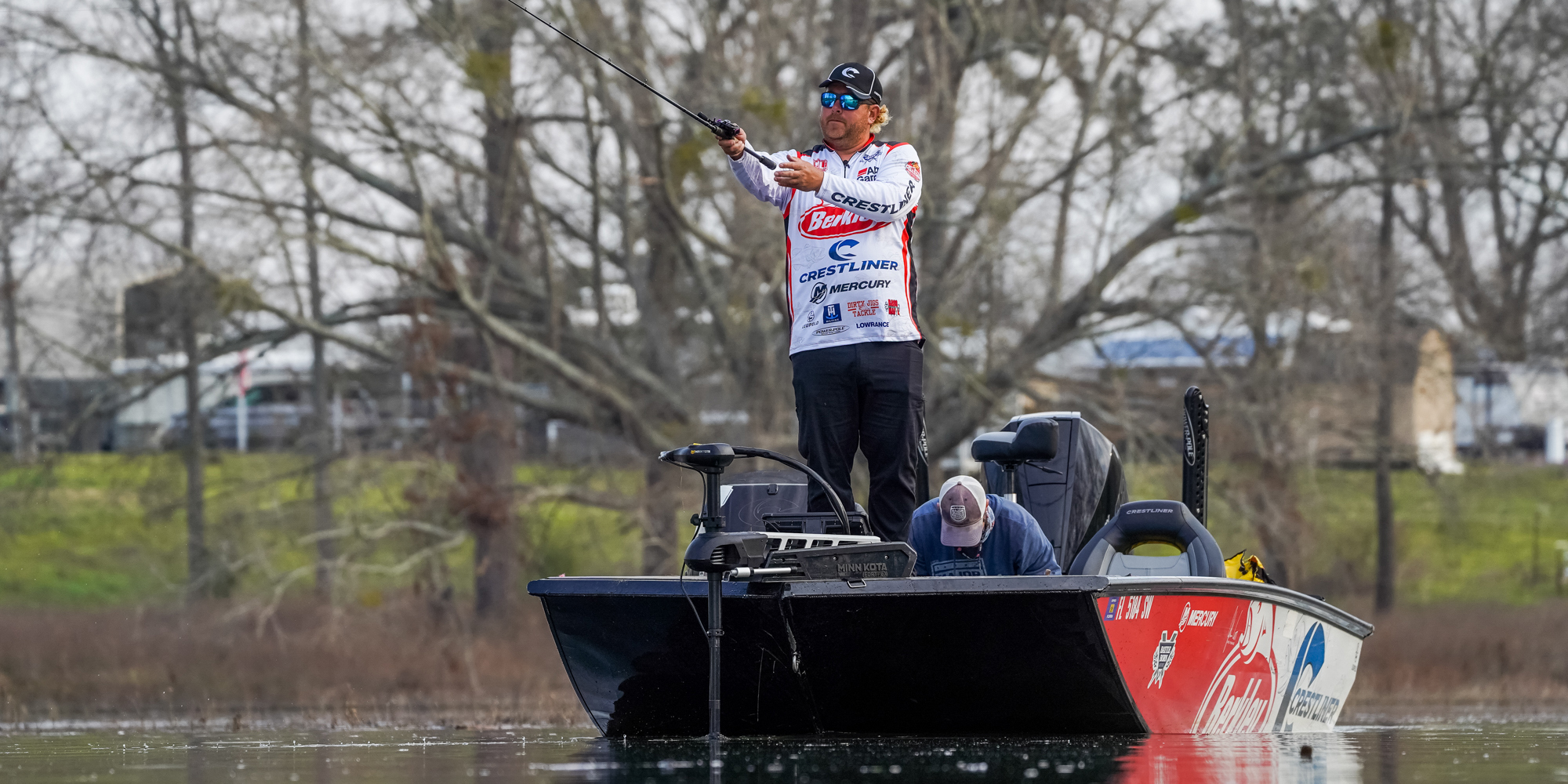 In four instances this season, if Cox makes the championship day, he will have to drive straight to the next event and compete without the benefit of any practice. The first such instance could occur following the Pickwick Lake event. The Bass Pro Tour season-opener begins in Jasper, Texas, 600 miles to the west, just as the Pickwick event concludes. In April, Cox will drive 850 miles from Austin, Texas, to Gadsden, Alabama, to compete the next day.

Scheduling conflicts where two events occur simultaneously will cause him to miss a couple of tournaments this season. Yet, to guarantee his spot in all three trails, Cox had to fork out the $5,000 entry fee to every tournament, whether he can make it to each event or not. The situation already occurred once this season, when Cox missed the Pro Circuit opener on Lake Okeechobee because he was fishing the Elite Series opener on the St. Johns River.

While the Elite Series field was waiting out a fog delay on day one on the St. Johns, Cox was pondering the four-hour drive down to Lake Okeechobee.

“If I could have caught a fish or two on Okeechobee in that short time, I could have earned some points toward the championship,” he explained.

Ultimately, the fog lifted, and Cox’s decision to wait it out was the right one. He competed three days and earned a 37th-place finish on the St. Johns.

Later this summer, the Elite Series and Bass Pro Tour will visit the St. Lawrence River in New York within three weeks of one another. Off-limits rules designed to keep anglers off tournament waters for 30 days prior to a tournament could prove challenging for Cox.

“We will have to wait and see on that one. The tournaments launch out of different parts of the river, so maybe there’s a chance I can compete in both,” he said.

Ultimately, scheduling conflicts and travel headaches are to be expected when fishing three major circuits, but for Cox, the potential payoffs are worth the sacrifice. 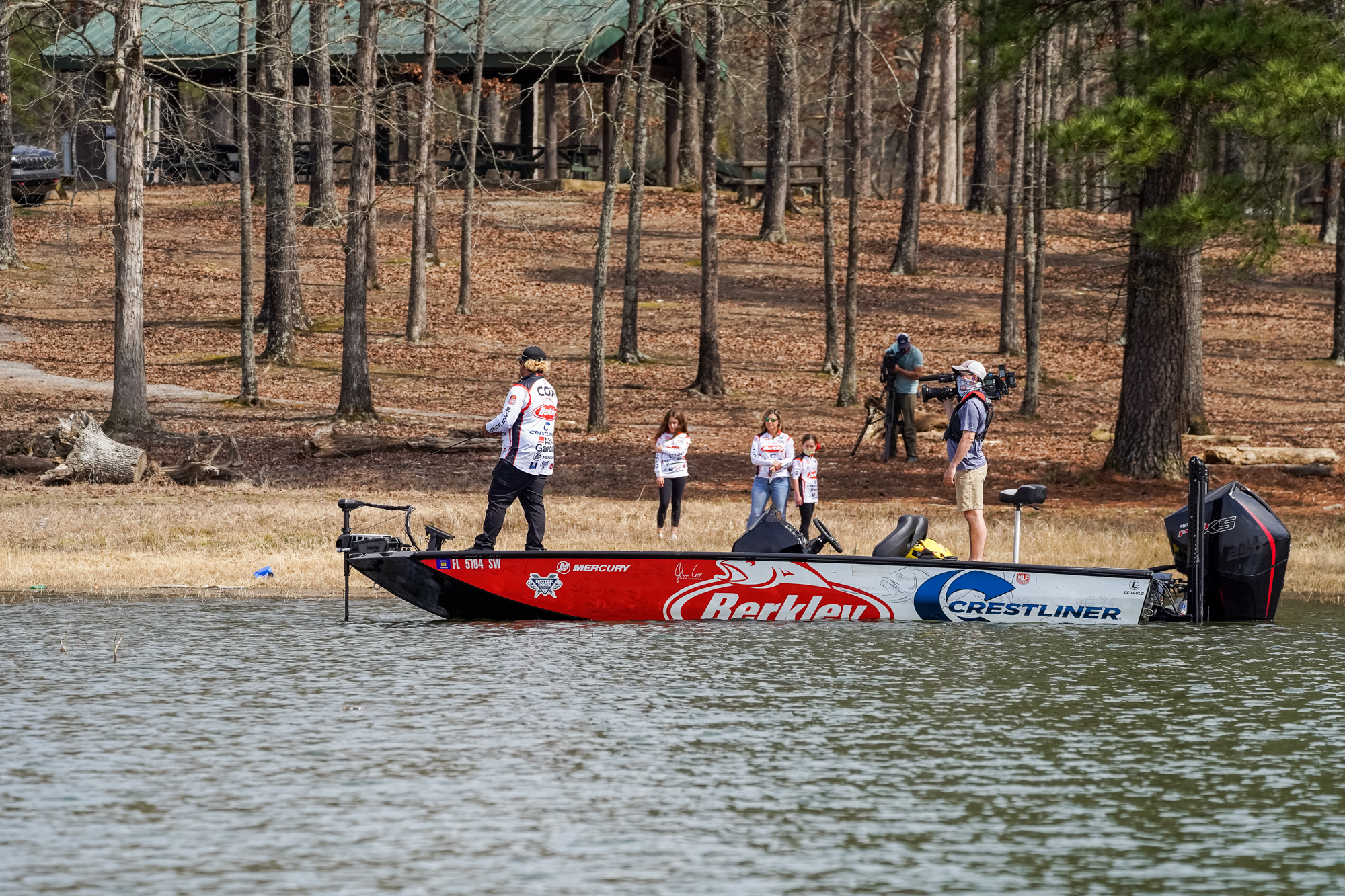 With a whirlwind schedule ahead of him, Cox declared three simple goals that, if achieved, would make the year a success.

“I want to cash a good check in every event I fish, I want to qualify for the championship of each trail and I would love to win an event on each trail,” he said.

So far, he is doing his part to achieve those goals. On the Elite Series, Cox finished 37th at the St. Johns and third on the Tennessee River in Knoxville, Tennessee, which has him sitting ninth in the standings. Sunday’s win on the Pro Circuit moved him up to 115th place from last place, where he wound up after missing the Okeechobee event.

The season is starting as if it might just be Cox’s year. His win at Lewis Smith Lake came on a fishery that has antagonized Cox for nearly a decade. The 2016 FLW Cup champion made the top 10 on Lewis Smith several times in the past with the Pro Circuit, including two runner-up finishes, but he had never been able to seal the deal – until now.

Cox maintained a familiar strategy all week, refusing to allow himself to do what he does best – sight-fish. Ultimately, that proved to be the right call for the event, but Cox said a gut check late in the final day is what sealed his victory on the northern Alabama fishery. 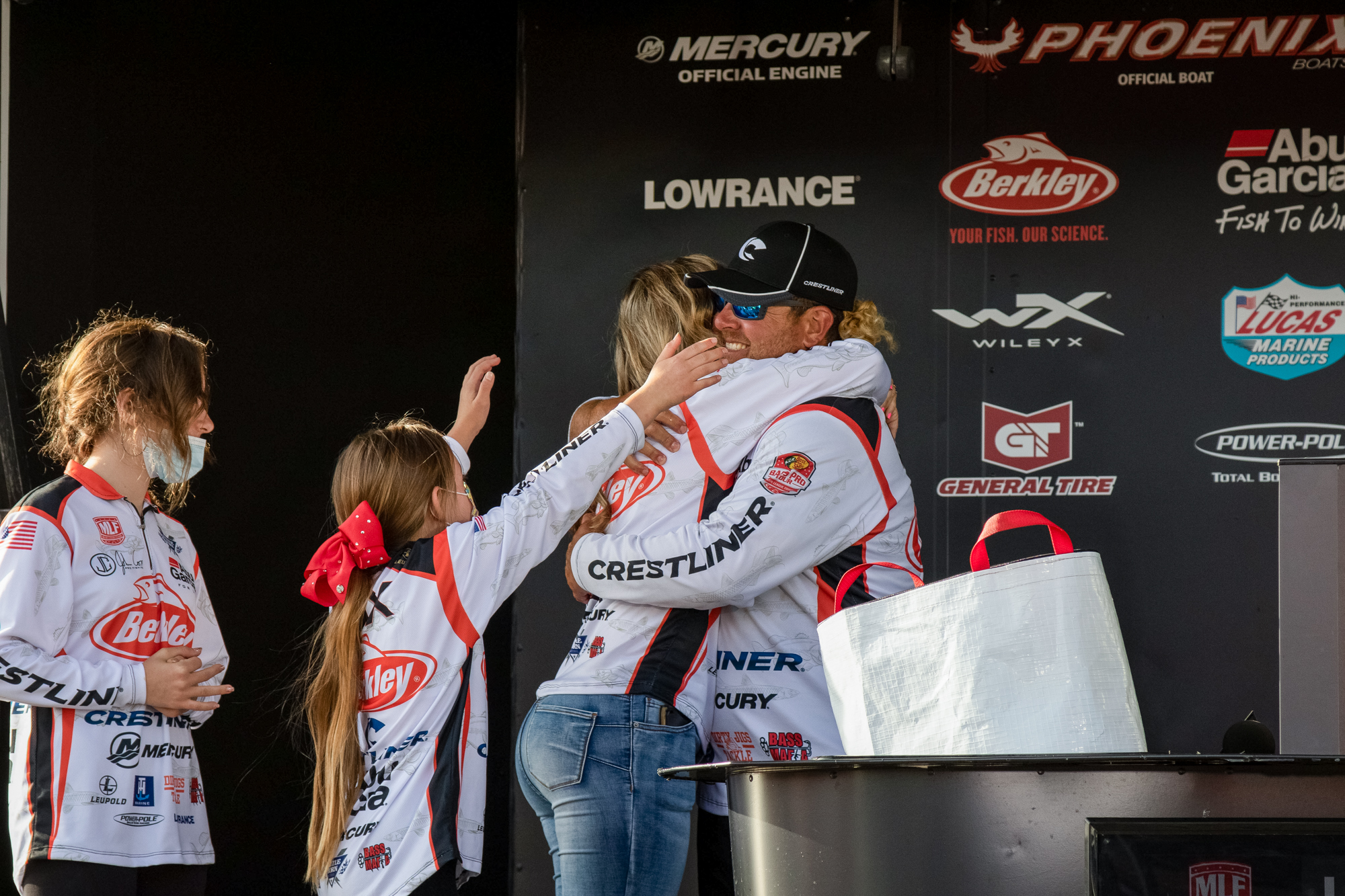 “I was idling to check-in when I realized I still had seven minutes left to fish and called an audible. I was feeling sick because it felt like it just wasn’t enough [weight],” said Cox. “I knew someone was catching them. So, I pulled over to this pocket and fired my jig right down the drain. A 4-pounder came out and hit it but didn’t take it. So, I killed it for a second, and she ate it.”
The last-minute catch capped an impressive week of fishing.

“This has been a really special week in so many ways,” said Cox. “I love this place and love fishing on Smith Lake, even despite my history. So, this win is incredible.”

To see more from Mercury Pro Team member John Cox, check him out on Facebook and Instagram.