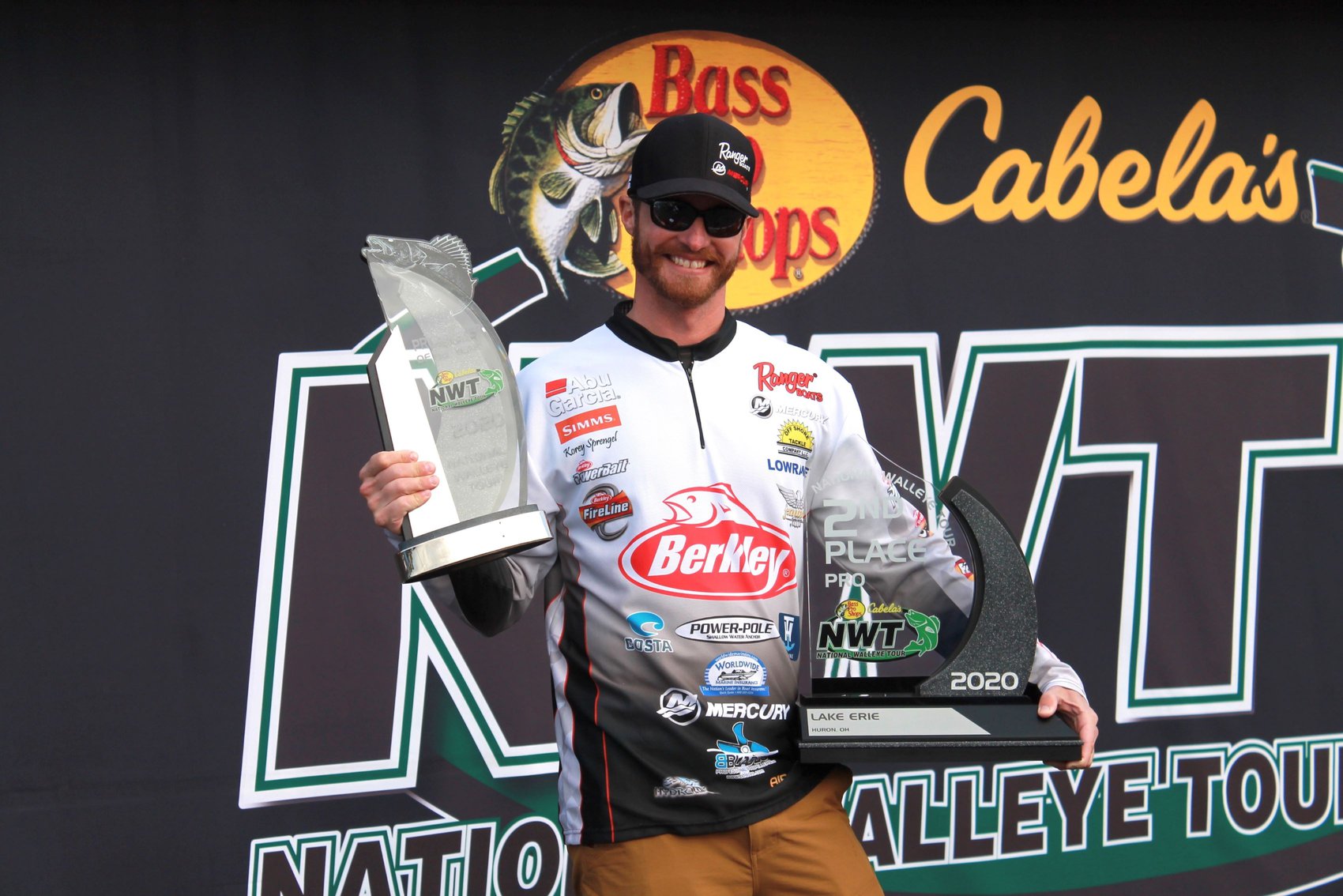 Korey Sprengel’s dominating performance on the National Walleye Tour (NWT) in 2020 was one of the least-surprising, most-normal aspects of a season that was otherwise wrought with change and uncertainty. The Mercury Pro Team angler from Wisconsin has never finished below 10th place in the NWT standings since the tour launched in 2013, and he’s only finished below sixth once in that span. This year, after the season’s start was delayed from April until mid-July and the entire schedule was revamped due to the COVID-19 pandemic, Sprengel breezed to his first NWT Angler of the Year title. His 28-point margin ahead of second place is the largest in NWT history.

While the season will be remembered by fans for the impacts of the pandemic and for Sprengel’s AOY dominance, the anglers who competed might recall 2020 as the year of long runs. At Green Bay, where Sprengel finished in first place, several pros ran 70 miles in each direction. At Sault Ste. Marie, champion Peter Schaefer ventured 86 miles each way to reach key waters of Lake Huron. Likewise, on Lake Sakakawea, pro winner Cody Northrop executed 60-mile one-way runs. Some anglers also explored mega-runs during practice for last week’s NWT Championship at Lake Erie, but in the end, even running 20 miles proved plenty daunting in October’s fickle conditions.

Sprengel was no stranger to long runs himself this year. With his Ranger 621FS PRO powered by a 400-hp Mercury Verado outboard, Sprengel confidently ran 40 miles each way to win the season opener on Green Bay. That trend continued at Sault Ste. Marie, where he finished 39th thanks to a long-distance strategy that incorporated horsepower and clever planning.

“At Sault Ste. Marie, a lot of guys were focused on being super fuel efficient so they didn’t have to get gas,” explained Sprengel. “They were backing off on their engines and conserving. I took the opposite approach. I went out as boat 15 on day one, and I ran 63 or 64 mph and passed every boat on the way down. Yes, I got gas, but that only took me eight minutes, so I was actually more efficient. At the end of the day, I also had the peace of mind to know I could ride wide open.”

Sprengel traveled 40 miles each way en route to finishing 11th at the regular-season finale on Sakakawea. At the championship on Erie, his farthest spot was only 20 miles out near the Canada border, but Sprengel did considerably more running as he pinpointed schools of walleyes that eventually earned him a runner-up finish.

“On Erie, just because you were there, that didn’t mean you were done driving. You had to drive around for 20 minutes or a half-hour to find the school that was just right,” Sprengel said.

Once he found the right school of walleyes, Sprengel used his 15hp Mercury EFI ProKicker to troll crankbaits.

“I would troll ‘troughing’ the waves,” said Sprengel, referring to trolling in the trough that forms between two parallel waves. “I push the boat with my ProKicker, and then I steer with my bow-mount trolling motor.”

Speed is key in any walleye trolling scenario, and Sprengel’s system gave him the best combination of speed control and steering. He set his ProKicker to troll between 1.6 and 2 mph and mixed in occasional bursts to 2.5 mph to try and trigger fish. Once the speed was set, all he had to do was steer using his bow-mount electric motor’s remote control.

This style of trolling is equipment-intensive, and Sprengel said the reliability of his equipment was a constant in an otherwise haywire year. That’s huge for winning Angler of the Year, but that’s not something exclusive to just this season.