Missy and Kyle Lukey sail across the open Atlantic to island-hop the Caribbean ‒ until the coronavirus halts their progress in the Grenadines. 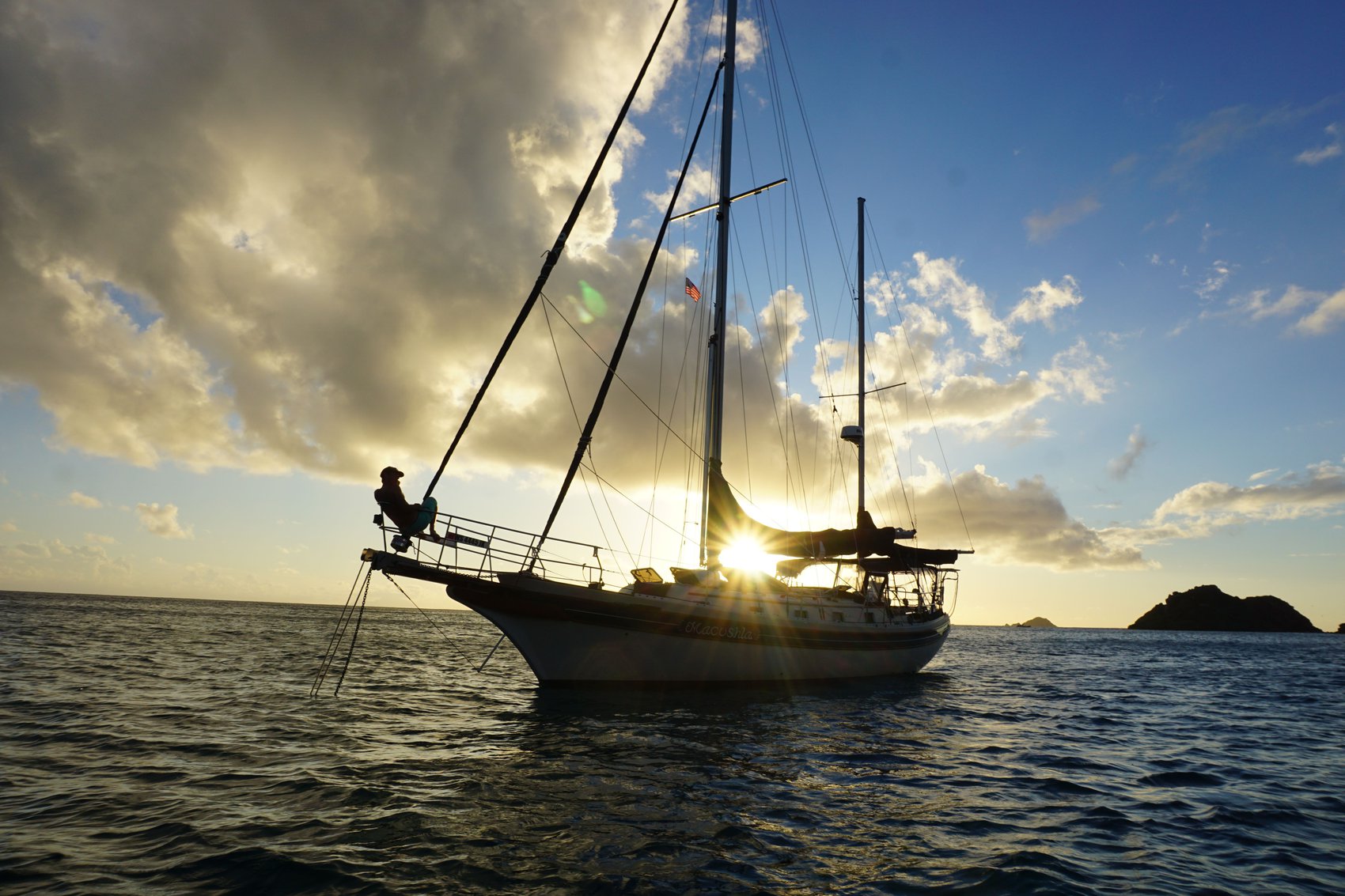 “Hello from the middle of the Atlantic!”

Missy Lukey wrote that greeting in her log last November when she; her husband, Kyle; and their friend, Matt, were surrounded by nothing but sea and sky nine days and 1,100 miles into their voyage from Beaufort, N.C., to St. Martin in the Caribbean on the Lukeys’ 40-foot sailboat, Macushla.

“I am struggling with just how to encapsulate all that this great sea is,” she continued. “It is unbelievably incredible in the sense that you are living in the middle of the vast open ocean . . . really living.”

Although the Midwestern couple had sailed through the Great Lakes and down the Erie Canal on the first leg of this adventure of a lifetime, they found the ocean crossing to be difficult at times.

She describes being onboard the sailboat at night during a squall: “Pitch black and ominous. You cannot see where you are going, or where you came from. You know you are moving because of the noise: the screaming wind, the eerily creaky boat, the waves pounding against the hull. You find yourself falling into a fitful sleep, only to feel like you are having that terrifying falling dream ‒ but it’s real. As the boat surfs down a wave, your stomach feels like you’ve just crested the giant drop of a rollercoaster ride.”

She was grateful Matt had joined them for this leg because he kept things light onboard. “He not only is a seasoned sailor, but he’s also hysterically funny,” she said.

Despite their rigorous preparations, the trio had experienced several problems during the ocean crossing, ranging from serious issues, such as the autopilot breaking down, to minor frustrations like finding a batch of fresh-baked brownies soaked with seawater in the galley. 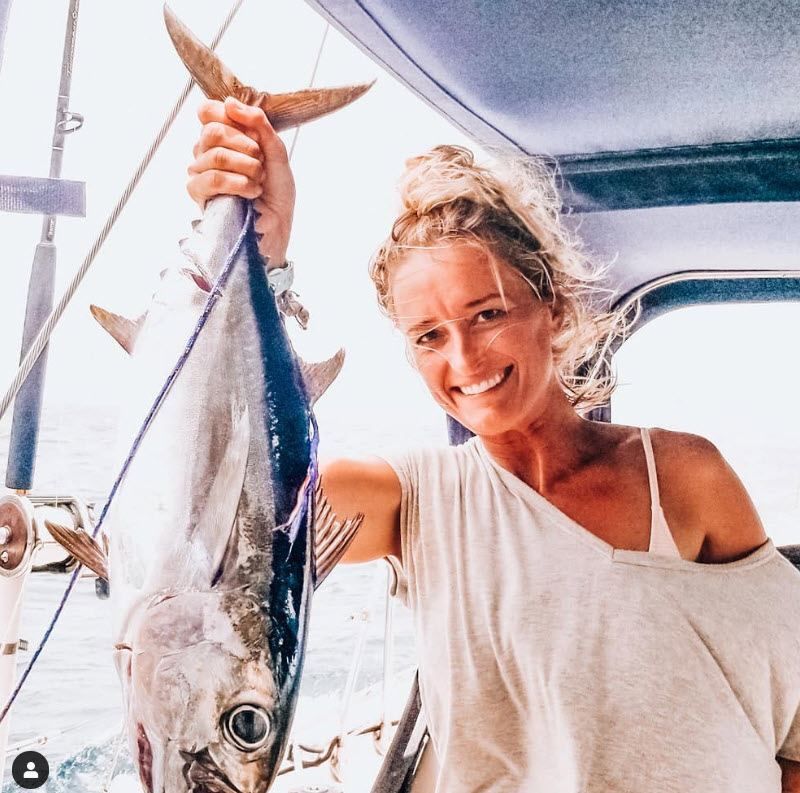 “Just when you think you mentally cannot take one more challenge, suddenly it becomes stunningly, breathtakingly beautiful,” Missy wrote. “You are surrounded by the most pristine blue water. Deep royal blue ‒ a color I had heard about but could not believe was this beautiful. Then you hear the unmistakable sound of the click of the reel and the shout, “FISH ON!” A mahi … a tuna … and, you’ll never believe it, a marlin! Each fish more vibrant than the last, surfacing to exuberant cheers from the now-ecstatic crew.”

Other highlights of the crossing included “Sunsets that go on for miles and miles; just when you think they are done, another wave of neon amber sky appears ... Perfect beam-on sailing, four sheets to the wind, in awe as you watch the becalmed sea slowly drift by.”

In mid-November, Macushla finally made landfall on the French side of the dual-nationality island of St. Martin/Sint Maarten.

“We had quite a few projects to complete after the crossing and needed to stick around to wait for some parts to come in,” Missy reported. But, by Thanksgiving, they were ready to head out on the next leg of their voyage, island-hopping down through the Caribbean island chain.

“The passage was such an incredible journey. It was what we had talked about since buying the boat,” she said. “I thought that was going to be the ‘big challenge’ ‒ the hardest part of our trek. Not until we got down here did I realize that the learning had just begun. Learning how to live anchored off new foreign lands … how to live with each other in confined spaces … how to embrace the unknown. Learning so much about yourself.”

As they sailed southward, they enjoyed experiencing the many sights, sounds and peoples of the Caribbean, along with the exotic flavors of the provisions they gathered ashore with their Mercury RIB dinghy.

“The islands are all so vastly different, with their own unique offerings,” Missy said. “So many of them are part of Europe in some way or another. This has a huge influence on the history, heritage, tourism and culture of each island.”

In mid-December, the Lukeys anchored Macushla in Jolly Harbour, Antigua, and quickly fell in love with the former British colony.

“Walking through English Harbour in Antigua feels like you are in downtown London but with palm trees,” she said. “To top it off, it’s a hub for mega-yachts. As a Great Lakes girl, I don’t think I will ever stop being mesmerized by these enormous floating palaces. The dinghy dock where we tied up our RIB was just feet from their bows, and we whipped back and forth in our little grocery-getter between their hulls.”

Barbuda was only a short sail away, and the couple went there often. “An island with endless white and pink sandy beaches,” Missy said. “A snorkeling and kiting paradise. A favorite of Princess Diana, and there is no denying why.”

In early February, Kyle had to fly home to Sheboygan, Wisconsin, for a week. “So, my amazing girlfriends booked last-minute tickets and joined me for an incredible girls’ week in Antigua,” Missy said. 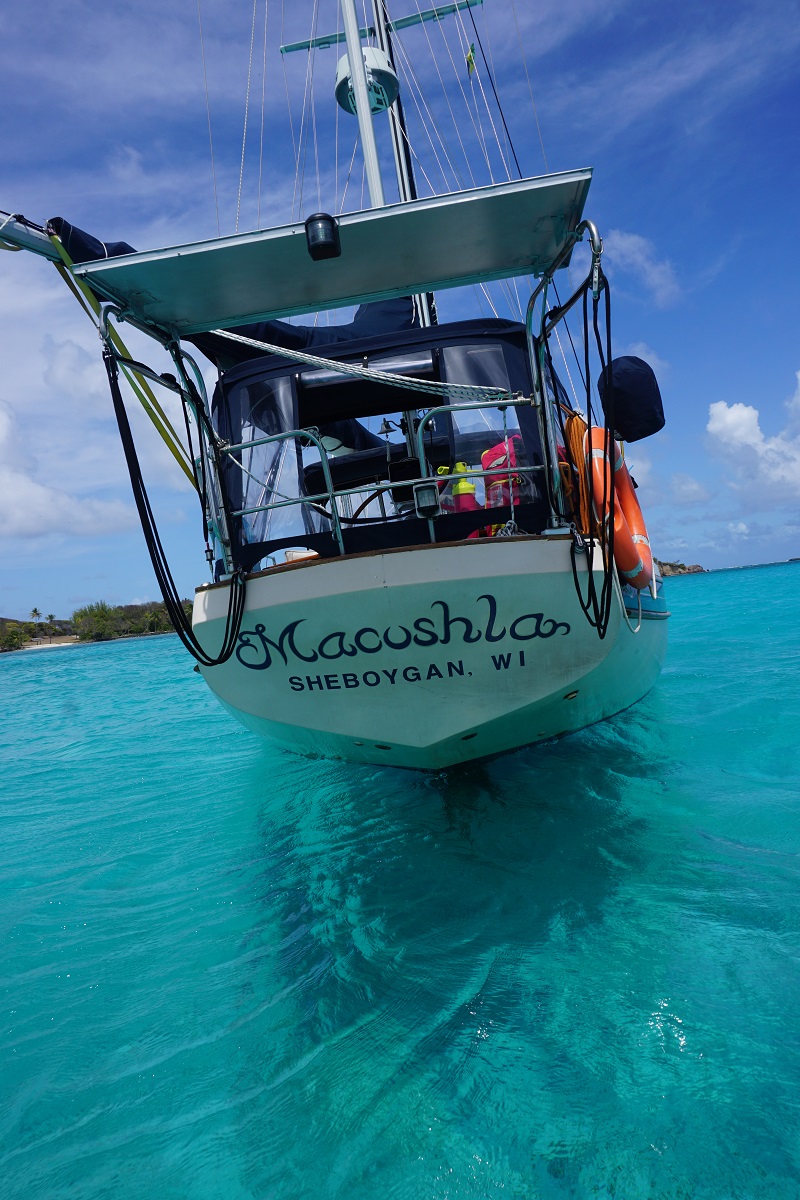 The Lukeys resumed their voyage south in mid-February, stopping in Guadeloupe to wait for the arrival of Kyle’s Aunt Marilyn and Uncle Bob. The foursome sailed on to Dominica, where Missy and Kyle took scuba lessons and earned their dive certifications, adding another adventure sport to the long list of others they enjoy.

“The reef system in Dominica is stunning. Kyle’s aunt and uncle both celebrated their 100th dive while we celebrated our first,” Missy said. “The people in Dominica are so welcoming … it’s a hard-working and hard-partying nation. The island is lush and vibrant in so many ways, with towering waterfalls and natural hot springs.”

Little did Missy and Kyle know that within a few weeks, the COVID-19 pandemic would completely alter the course of their sailing adventure. But first they enjoyed a short “calm before the storm” in Martinique, where they found “An entire east coast left virtually untouched by cruisers; a place where we were able to seek shelter in mangroves, kiteboard by day and watch sunsets from our secluded bay at night,” she said.

St. Vincent and the Grenadines, where Macushla landed in early March, are a well-known sailor’s paradise.

“The Caribbean blue everyone dreams about, and the site of many scenes in ‘Pirates of the Caribbean,’” Missy said. “Marine parks and anchorages with brilliant blue water like I have never seen before.”

One day, when they were anchored off a little isle in the Grenadines, a man in a small rowboat pulled up to Macushla selling fish out of a cooler.

“After purchasing our selection, Kyle, being Kyle, started asking all sorts of questions,” Missy said. “’Where did the fish come from? How far out do you have to go to get it? What kind of bait or lures are you using? Can I come with?’ 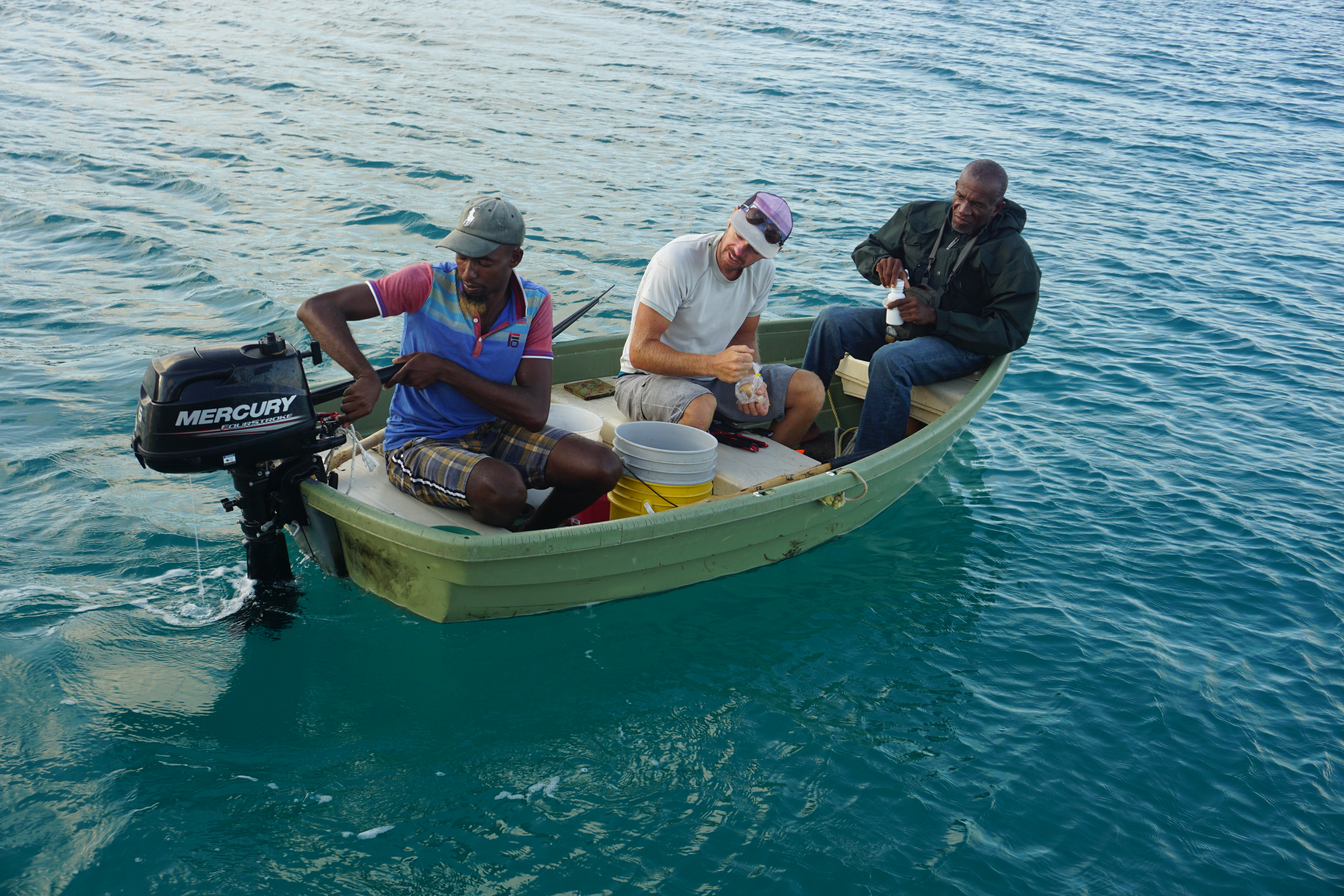 “The next day, long before the sun began to shine her rays, Kyle was off. Three men squished into the tiny plastic rowboat heading out to sea. He came back exhausted but ecstatic. Fresh fish, a wealth of new fishing knowledge, and two new friends. Before passing out on the couch he declared with a huge smile, ‘We’re going again tomorrow, but were bringing the Mercury.’

“The next morning, we loaded our dinghy’s 6hp Mercury FourStroke outboard onto their boat. Then it was three men in a tiny rowboat motoring out to sea.”

Not long after, fears about the spread of the coronavirus seized St. Vincent and the Grenadines.

“We watched wide-eyed as most of the boats in a busy anchorage pulled up anchor to flee south,” Missy said. “Since the outbreak in Europe and the States, most of the islands have had to act swiftly and accordingly to try and keep the people here safe. Like so much of the world, this brought a screeching halt to businesses … a bustling community fueled by tourism became suddenly and eerily vacant. There are various levels of lockdowns and quarantines currently in place for cruising boats.

“Some islands are just asking you to maintain a reasonable distance from others if you need to go to shore, but most are mandating you stay on your boat, sheltering in place for the time being. This leaves cruisers sitting on their boats staring at ‘the beach they cannot reach.’”

For now, Missy and Kyle are taking it one day at a time.

“Although we originally planned on heading back to Wisconsin before hurricane season, we are now here for the time being, just grateful to be happy, healthy, and safe, and grateful to get daily updates from our friends and family, knowing they too are happy, healthy, and safe,” she said. “Our foreseeable plans have gone with the wind, but new opportunities may emerge with the change in tides. Who knows what tomorrow may bring? As they say… ‘Fair Winds and Following Seas.’”

In the second installment of "Love in Adventure," we check in with Missy and Kyle Lukey as they continue their journey from Sheboygan, Wisconsin, to the British Virgin Islands. To get caught up on the first installment of their story, ...