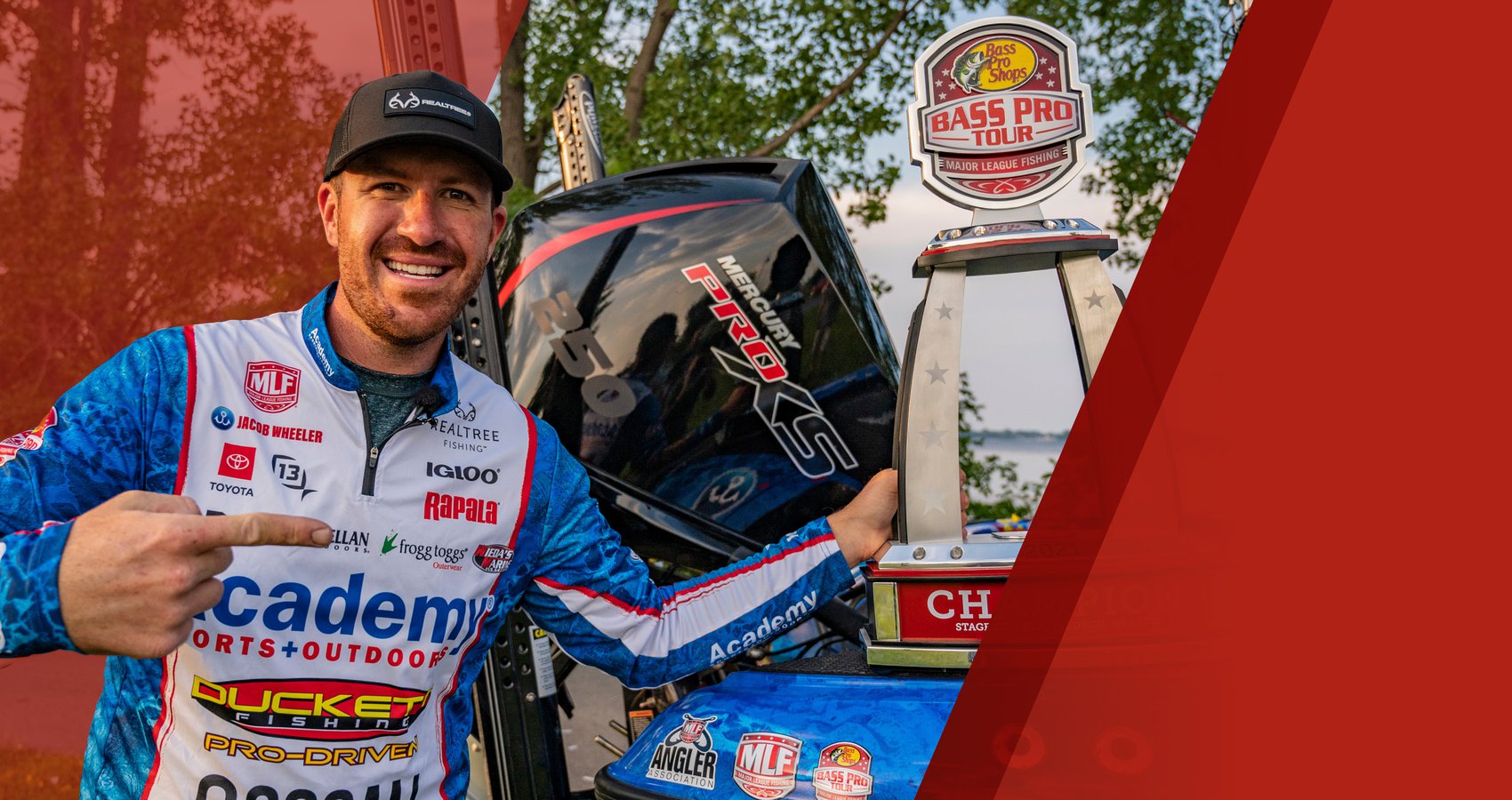 It’s getting hard to contextualize just how well Mercury Pro Team angler Jacob Wheeler of Harrison, Tennessee, has competed in 2021. His recent stats are beyond impressive. 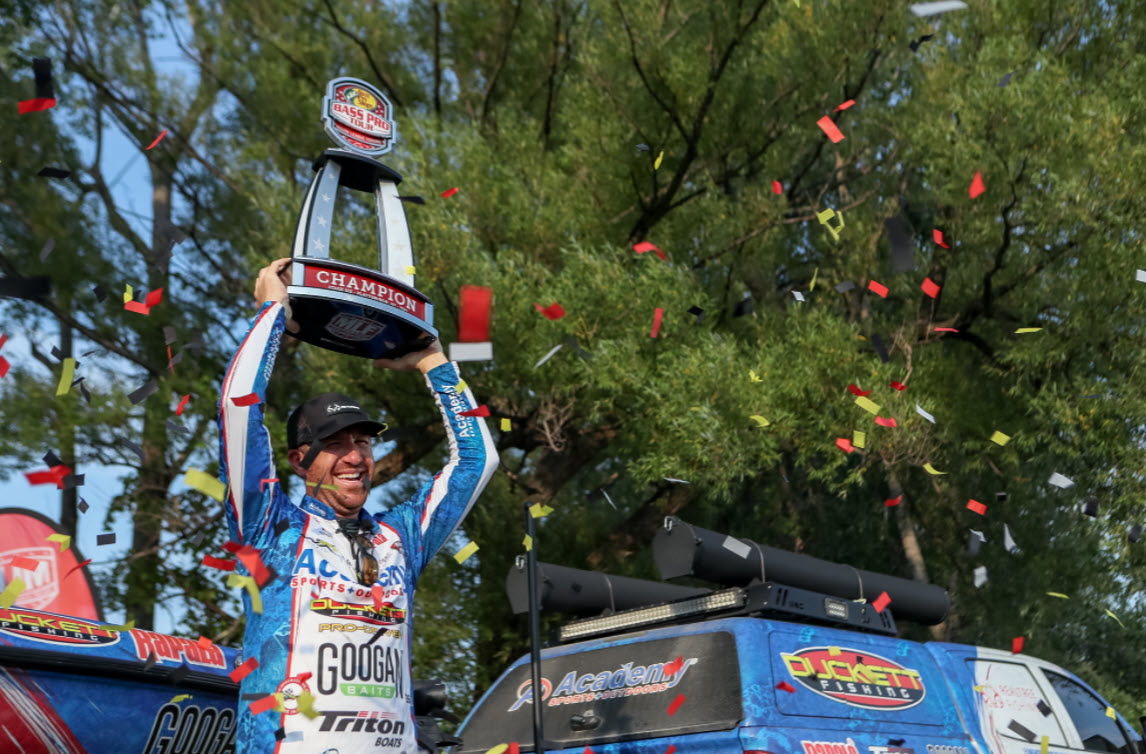 Prior to his latest win, Wheeler had the record for most career victories on the Bass Pro Tour, and he’s now extended that record to five. Plus, he’s finished first or second in four of the last five events on MLF’s top circuit.

“It’s crazy to think – three wins this year. Absolutely crazy,” Wheeler said. “It’s been an unbelievable year. I just try to have that mindset of don’t ever give up, don’t ever give in. Just constantly working and preparing for the next one. There is so much hard work that goes into these events. And it still takes a lot of things to go right to come out on top against this group of guys.

“It takes so much time out here on the water,” Wheeler continued. “I just love this sport. I love competing. I love preparing for events. I love competing against this group of guys. These guys right here that I’m fishing against are the best in the world, hands down – the absolute toughest group of guys to beat. You have to bring your ‘A game,’ day in and day out. Fishing against the best pushes me to become better.”

“It was just typical smallmouth stuff,” he said. “Most of them came on a drop-shot rig, and some on a Ned rig. It came down to several different Ned-style baits.

The top-10 field at Stage Six on Lake Champlain included nine pros powered by Mercury. Here’s the top 10, along with their Championship Round catch totals:

Despite Wheeler’s already incredible season, he still has one goal left for the year: the Bass Pro Tour Angler of the Year (AOY) title. Fellow Mercury Pro Team member Ott DeFoe of Blaine, Tennessee, who finished the Lake Champlain event in third, has had an incredible season in his own right. DeFoe has a 12-point lead over Wheeler in the AOY race, with only the Sept. 10-15 finale at Lake St. Clair in St. Clair Shores near Detroit, Michigan, remaining. 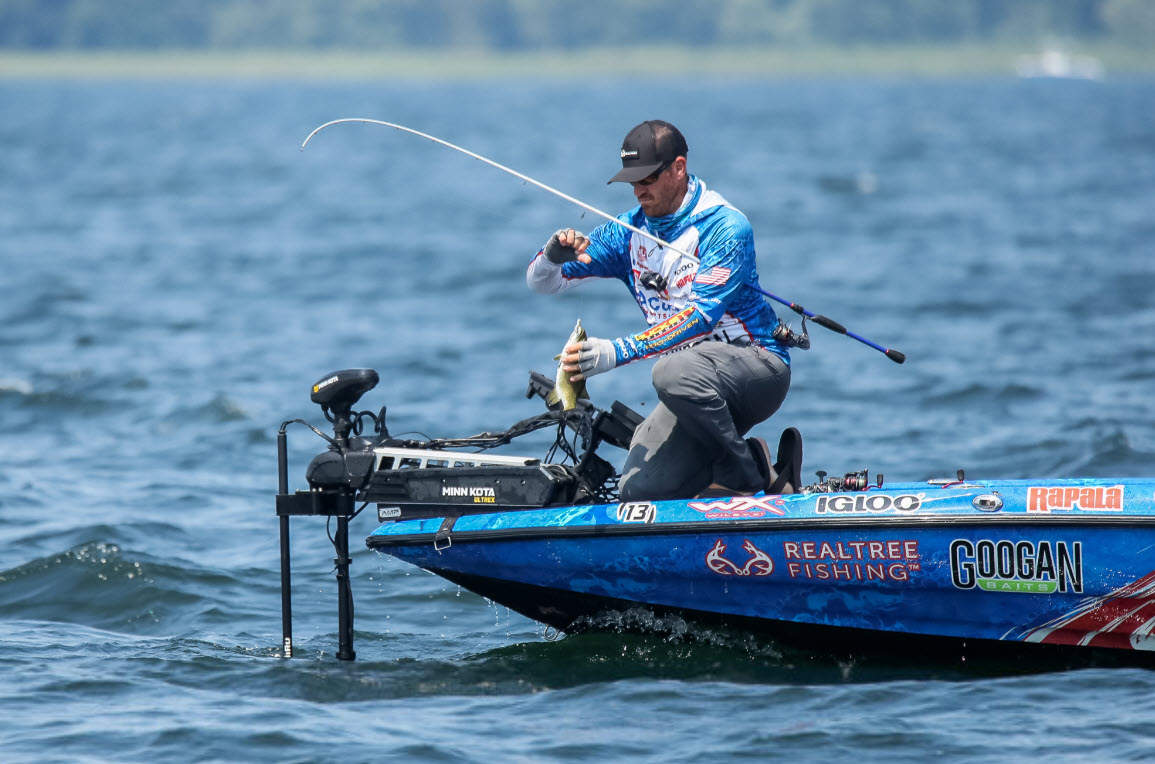 “I love Ott to death. He is unreal everywhere we go,” Wheeler added. “It’s going to be a battle. If either of us slips up one time (at Lake St. Clair), one day, it’s over. Whoever wins is going to have to make a top 10 at Stage Seven in Detroit, and we’ve got our work cut out for us. Realistically, I could have a phenomenal finish and still get beat. I’m just going to worry about winning another tournament, and if it works out, it works out. I don’t have any AOY pressure. I’m going to prepare for that tournament to win it.”

DeFoe’s solid season includes two Bass Pro Tour wins amid remarkable consistency. His lowest finish was a 22nd-place result at Stage Two on Lake Travis in Texas. Between them, DeFoe and Wheeler have won five of the six events contested on the tour this year. Mercury Pro Team member Kevin VanDam of Michigan won the only other tournament, Stage Four on Lake Chickamauga.

DeFoe now has his sights set on the season finale at Lake St. Clair as well.

“In my mind, I keep going through tournaments I have fished on St. Clair and how many fish I caught each day,” DeFoe said. “MLF’s catch, weigh and immediate release format is a lot different than a five-fish tournament. In the past, I might have caught 11 to 12 fish in a day, and the best five would weigh 19 pounds. Now, with no limits and a 2-pound minimum, I have to figure out how those areas will work. The size of the fish definitely matters, but quantity is important, too.

“One difference between Wheeler and me is that he likes to put himself around the biggest population of fish on a lake,” DeFoe added. “He’s really good at it, too. I would rather fish in an area with fewer fish but a lot less boats around. He’s good at fishing in areas with other boats if that’s where the most fish are. I want to find a place where I don’t even see another competitor and not have to share an area and out-fish someone.

“Jacob’s preparation is impressive. He always seems to be thinking two or three steps ahead. For example, we all look at forecasts and wind directions to some degree, but he’s always trying to find places where the wind is working for him or places he might need to get out of the wind.”

Lake St. Clair is a massive fishery at more than 400 square miles. However, the fish do often group up, and fishing around competitors is often a factor.

“The biggest factor there may be the wind. It plays a big role on a large body of water like that,” concluded DeFoe.

Mercury Pro Team member Brent Ehrler sits in third place in the Bass Pro Tour Angler of the Year race. He finished 10th at Lake Champlain but still lost some ground to Wheeler. Ehrler is 17 points behind DeFoe, and will undoubtedly push the top two pros in the final event.

Despite the multiple career wins and championships by Wheeler and DeFoe, neither angler has achieved an Angler of the Year title at the tour level. Now, they both have a great opportunity to add a coveted piece of hardware to their mantle and another entry on their fishing resume.

Mercury Pro Team member Jacob Wheeler is the 2022 Major League Fishing (MLF) Bass Pro Tour Angler of the Year (AOY). After a remarkable season in which he finished no lower than 11th over seven events, he claimed the title ...