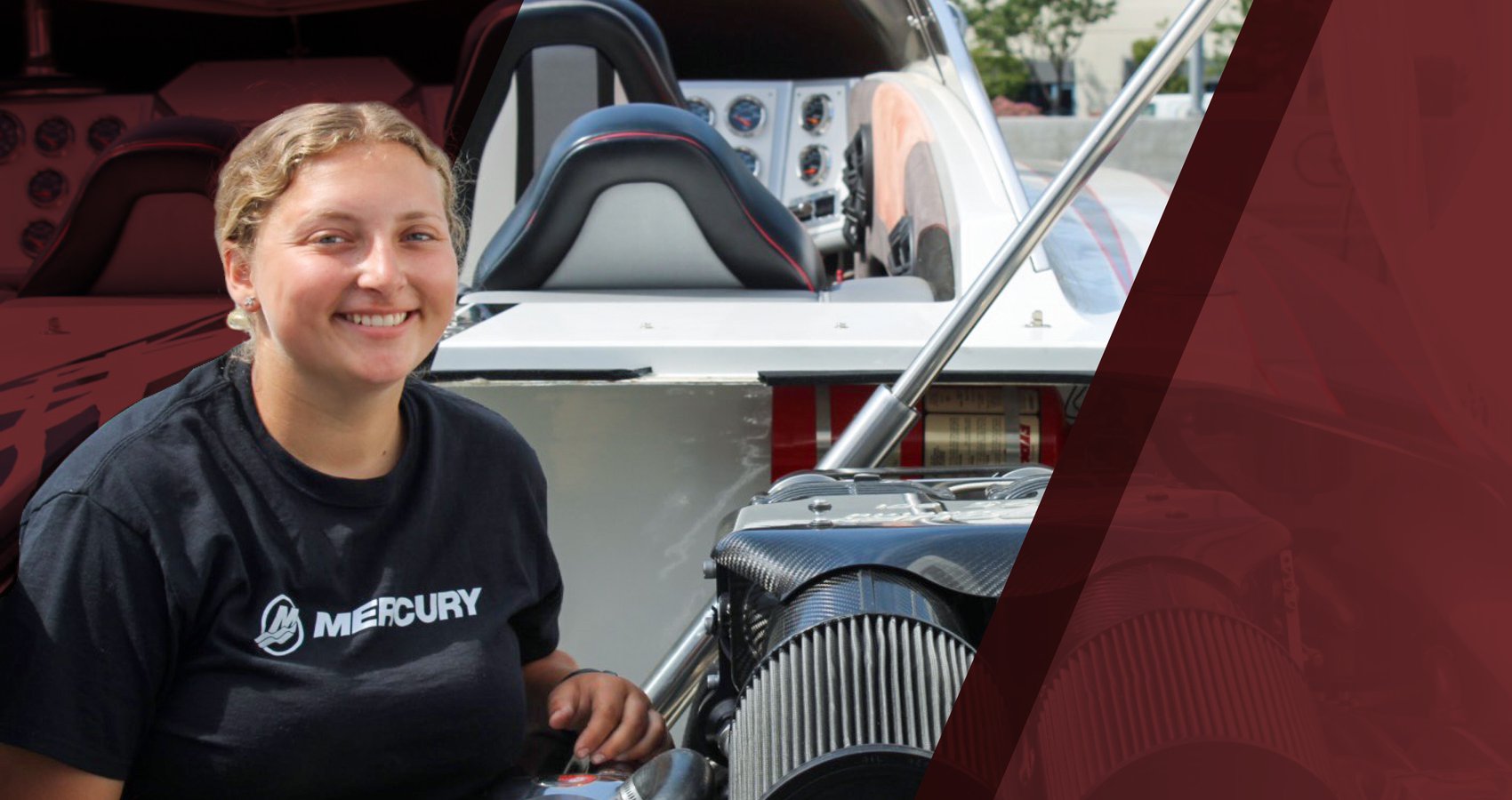 It’s 1 p.m. and Jordan Price is headed to work thanks to a ride from one of her older sisters. Fresh off competing in the Baja 500 desert race – a thrilling off-road gauntlet on one of the world’s most famous circuits – the 17-year-old marine technician has a job to do. In the back of West Coast Offshore Unlimited, just north of San Jose, Jordan grabs a wrench and pops the cowling off a Mercury outboard engine. 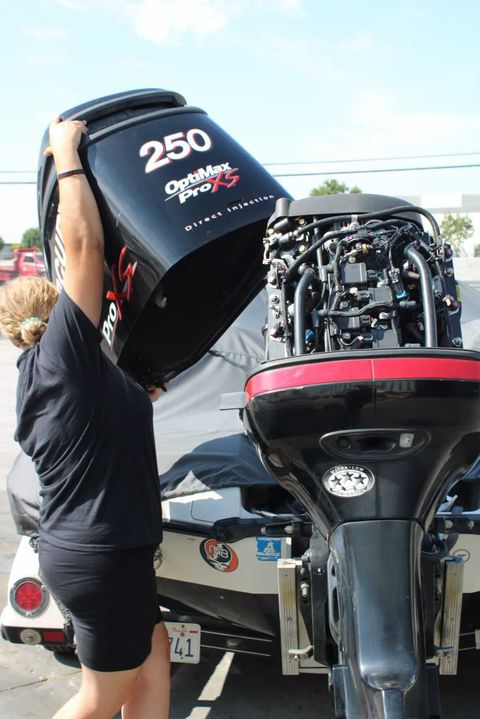 “I do a lot of services,” she said. “This week, I’ve changed the prop shaft on a drive, and I’ve had to plug into the computer of some new engines because they were having issues. We had a boat come in with twin engines, and I had to replace both of them. When we finished, we had the biggest smiles on our faces because that job was so tough, but the customer was so happy to have that boat repowered.”

“The customers are amazed at how much she knows,” said shop owner, father and veteran desert racer Kevin Price. “They listen. Once she starts talking about engines, they never question what she says.”

West Coast Offshore is a family affair. Kevin founded the Fremont, California, boat dealer in 2000 after his father, Jerry, closed his own shop. Jerry soon hopped on board with his son and, for a few precious years, labored to build what has become a well-known destination for Bay Area boat repairs. Generally, they handle watercraft ranging from 17 to 33 feet long. And today, the family’s daughters carry on the tradition. Jordan, 17, and Kaitlyn, 27, are both integral in day-to-day operations. A third Price daughter, Madison, 24, also pulls shifts at the family business. But while others manage business operations, Jordan handles the wrench.

“One day, she told me that she wanted to be a mechanic,” said Kevin. “I said, ‘Are you really serious? OK. Well, you need to be in the shop every day, and I’ll show you how to do things.’”

That initial conversation took place about three years ago, when Jordan was 14. By 15, she was turning the head of Mercury Marine Technical Account Manager Steve Graddy. In house for a shop visit, Graddy watched the young Jordan servicing a sterndrive and was blown away. By the time he left, he was making plans to issue her a Mercury technician ID number and a spot at Mercury University.

“I actually really enjoy the classes,” she said. “I like how I can work at my own pace; how it’s not something on the clock. The instructors are great. You might feel like you have a dumb question, but they’re pretty quick to assure you that every question is important, and I always have a great time learning from them.”

Three years into her career, Jordan is one of four mechanics employed at the shop. She’s responsible for on-the-water tests, service work and the usual gophering while juggling high school and online courses at Mercury University. She takes bass boats into lakes, bay boats into San Francisco Bay and constantly monitors her inbox for new coursework from school and Mercury.

Jordan said both outboard and sterndrive engines require unique skills. Mastering the methods to maintain and repair them can require hours of attention to detail, learning and patience. 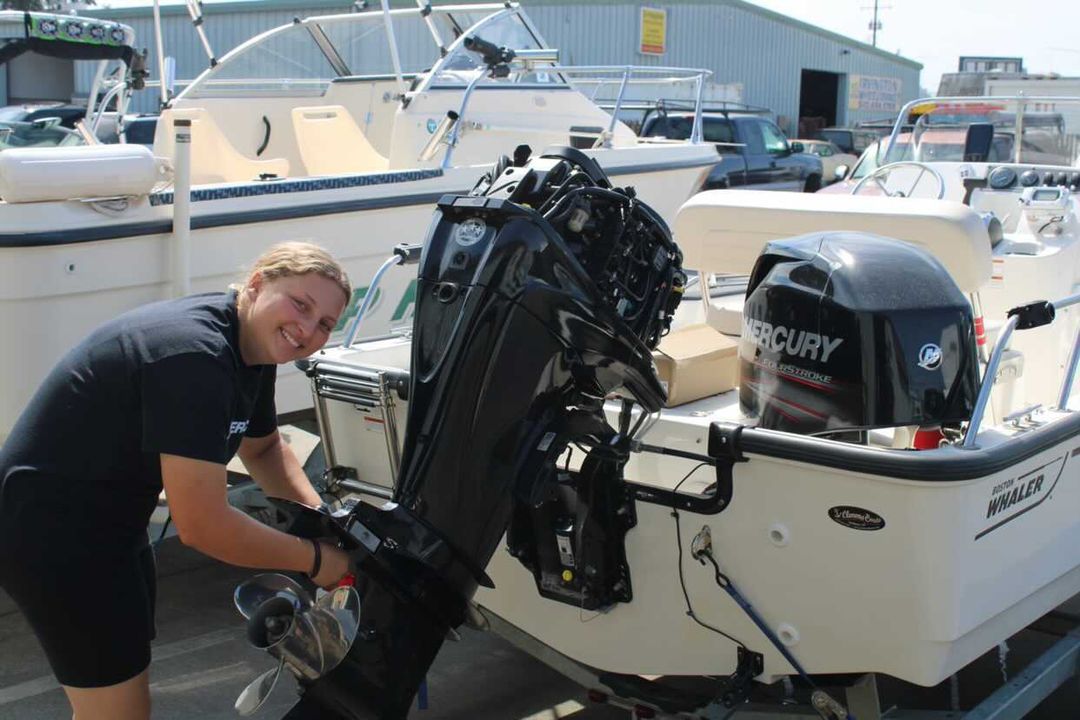 All of that hard work, she said, doesn’t just make her a better mechanic in the shop. It pays off on the off-road racecourses of the desert, too.

“The last race, I noticed my car was not running right. I came into the pit and told my dad that it was misfiring, that something internally was broken in the engine,” Jordan said. “Part of knowing that comes from working on boats. I know on boat engines that a misfire is likely the ignition system or the plugs, and it gives us a place to start troubleshooting.”

Her experience in the shop also makes her safer on race days. In the world of desert racing, the Baja 500 – a 500-mile loop through the Mexican desert outside of Ensenada – is just a warmup for the hallmark race, the Baja 1000. That world-famous race blisters through the Baja Peninsula for about 1,000 miles from Ensenada to La Paz. Motorcycles, ATVs, dune buggies, production vehicles and custom trucks all compete to take home a racing crown that’s become an off-road equivalent to Daytona or Le Mans.

This year, the youngest Price sister plans to take on the entire 1,000-mile route alone, behind the wheel of a race buggy.

If she succeeds, she’ll be among off-road racing’s “Iron Women,” an elite group of trailblazers that battle some of the toughest race conditions on the planet alone. Her goal? Follow in the footsteps of Polaris pro Kristen Matlock, who’s not only competed in Baja, but also the infamous 9,300-mile Dakar Rally through the Arabian Desert.

“To be honest, sometimes it’s hard to take in,” added Kevin, himself a former Baja 1000 winner. “I think, ‘Wow, I can’t believe she wants to pursue this.’ She has this never-give-up attitude that pushes her on and on.”

But before she heads back to Baja and before she, hopefully, finds herself following the paths of Lawrence of Arabia and Matlock in the Middle East, Jordan plans on completing her Mercury Marine education in person. Soon, she’ll head to Texas, where she plans to immerse herself in hands-on training from Mercury University experts.

“I don’t get a free pass,” added Jordan. “I have to work on the racecars. I have to work on boats. Just yesterday, we pulled the engine out of the car, but knowing how the car works makes you a better racer. You don’t want to sit out in the desert for hours waiting on your support team if you don’t have to.”

To tag along with Jordan’s journey to the Baja 1000 and her adventures in the marine shop, follow her on Instagram.