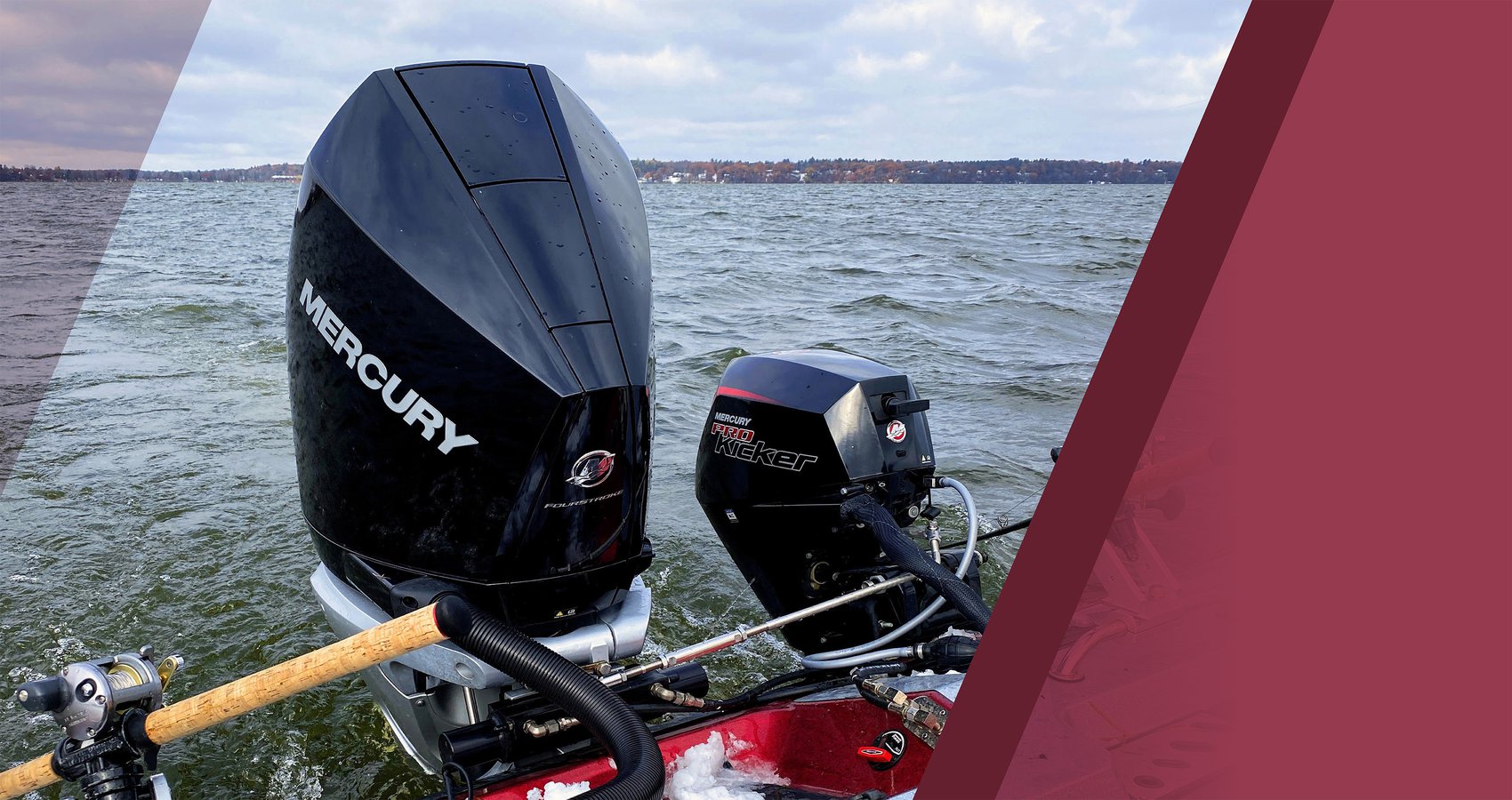 Whether you fish for fun or for competition, trolling is one of the most effective techniques to optimize your time on the water. The key to doing it successfully is precision boat control, which can be accomplished with a variety of propulsion systems based on your desired speed, your bait or lure, the area you’re targeting and the way your boat is rigged. 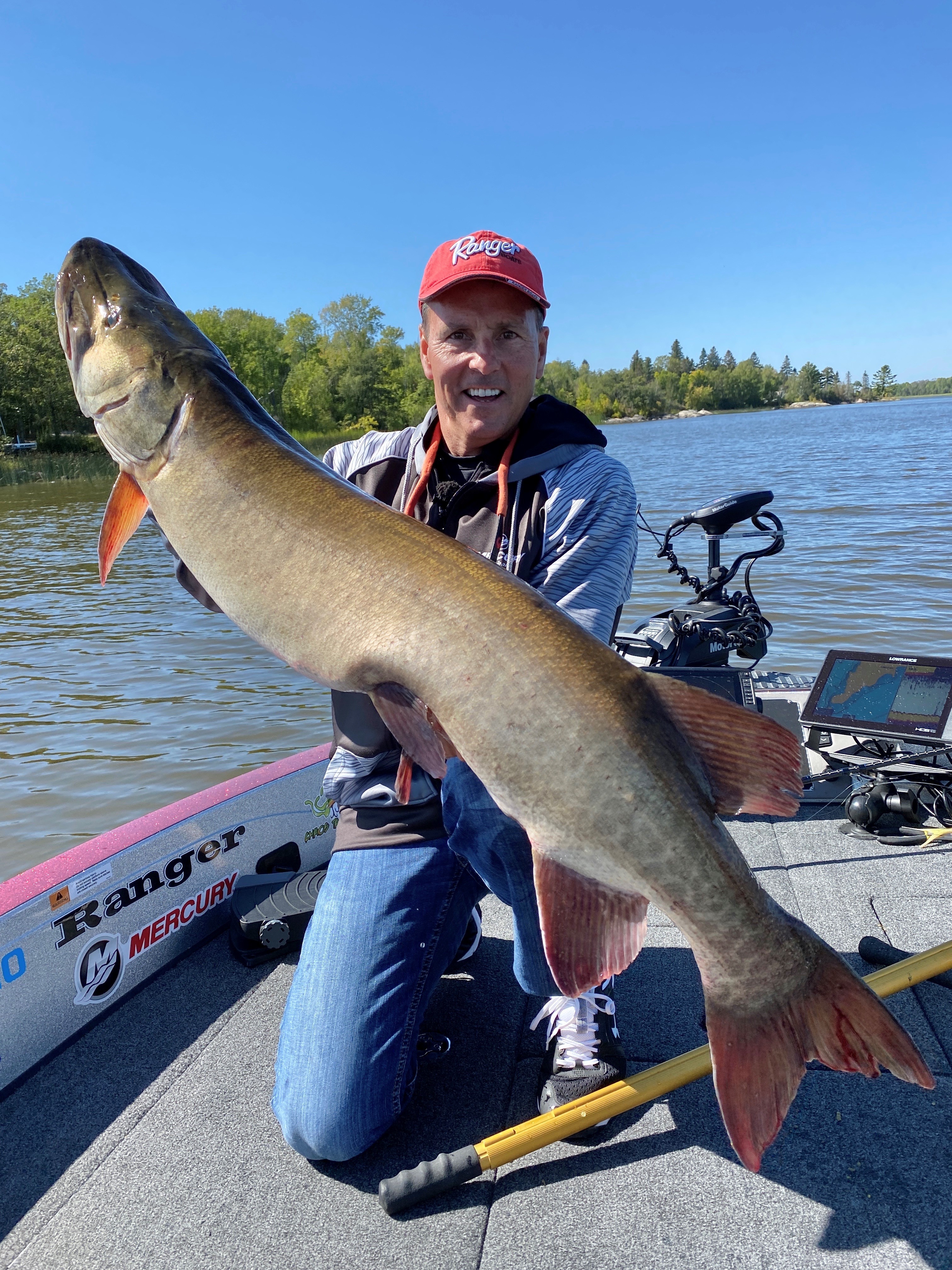 Legendary Midwestern musky angler Jim Saric understands the ins and outs of trolling better than most. The Mercury® Pro Team member and host of “Musky Hunter TV” has been showcasing cutting-edge multi-species freshwater fishing tactics for decades. He relies on multiple sources of propulsion – sometimes in combination with one another – to power his Ranger® 620FS Pro while trolling. His strategies for using each one can help you improve your odds of success.

Saric’s primary source of power on his 620 is a Mercury 4.6L V8 300hp Verado® outboard. Like a lot of multi-species anglers, he also has a smaller kicker engine on his boat. Though the kicker gets used most often for trolling, Saric still trolls with the main engine when extreme weather conditions kick up.

“A lot of people don’t think of trolling with a big engine, but there are some situations where it’s the best choice,” Saric said. “When I’m trolling for muskies in big wind and trying to stay relatively tight to structure, it’s the most precise method. If you’re trolling from a console (as opposed to using a tiller-steer engine), you can use your wheel to get in and out of cover very quickly.

“It can also be safer than a kicker. In many cases when I’m fishing muskies, having heavy wind blowing on a structural element or into a rocky shoreline can be really key. So, I’m on that edge of wanting to make sure I can catch fish close to the rocks, but I don’t want to get too close to the rocks for safety reasons. With the big motor, I can turn away really quickly.”

The biggest drawback to trolling with a high-horsepower engine is the inability to troll at extremely low speeds. With his 300hp Verado outboard, Saric can troll as slow as about 2.5 mph in calm conditions and a little slower if he’s moving into wind or current.

Despite that issue, Saric points out that anglers shouldn’t hesitate to troll with the main engine. Incorporating drift socks and other tools that create drag can help slow the boat when necessary. If you’re outfitting a boat and plan to not have a kicker, you should consider a primary engine model with inherent or add-on features that can improve trolling performance.

For instance, Saric’s 300hp Verado engine includes industry-leading technologies that isolate engine noise and vibration, which helps minimize the likelihood of spooking fish. And its Digital Throttle & Shift controls allow smooth, effortless shifting when making repeated throttle adjustments. Similarly, the Mercury SmartCraft® suite of digital technologies is compatible with most Mercury outboards down to 40hp and includes helpful tools such as Troll Control, which can lock in engine rpm and allow for minute 10 rpm adjustments. 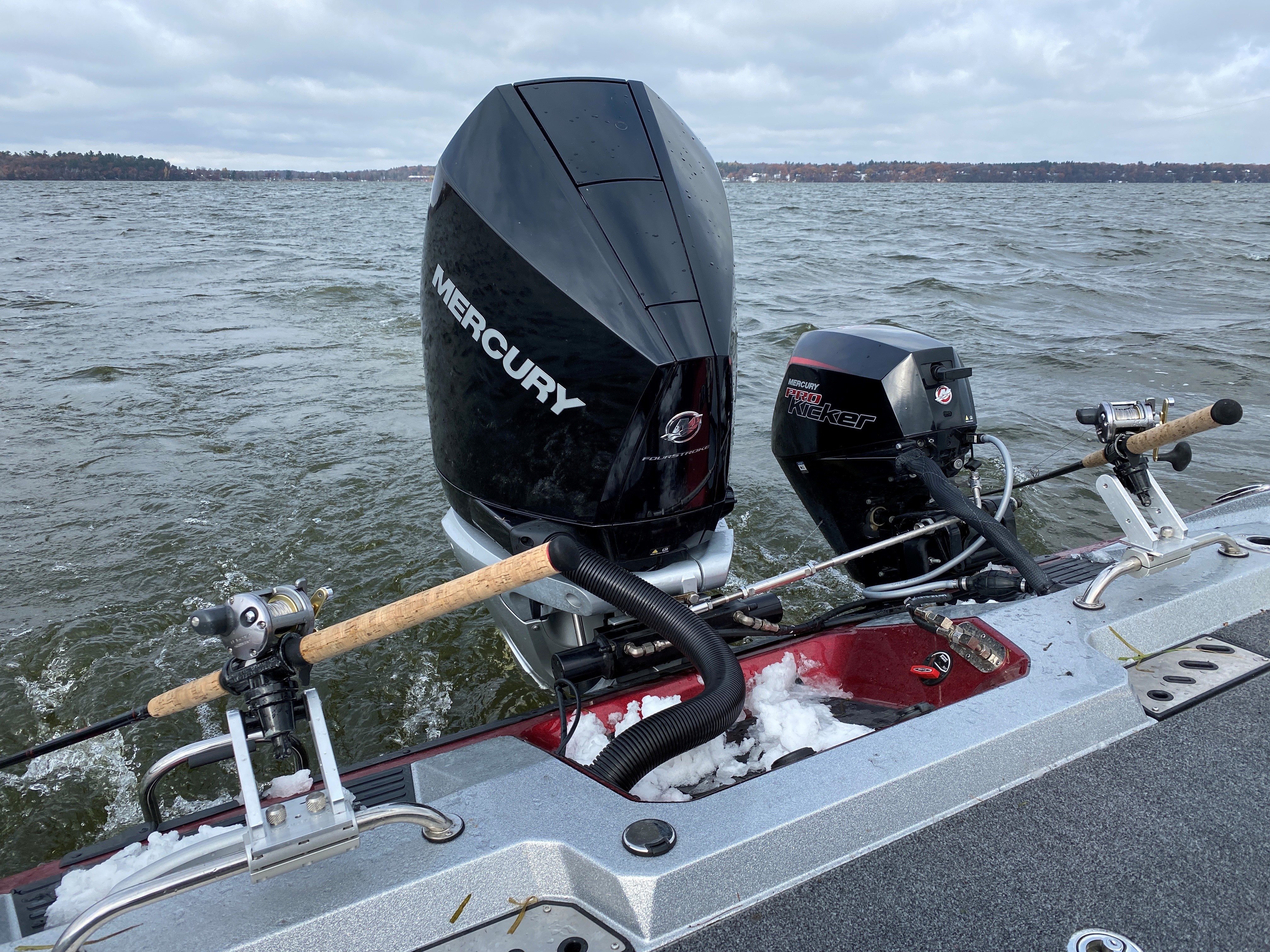 Saric, who uses a Mercury 15hp EFI ProKicker outboard, connects his main engine to the kicker with a tie bar so he can steer both engines from the console with his wheel. A second remote throttle just for the kicker controls the speed.

This setup is his go-to choice for all but extreme conditions because of the kicker’s versatility.

“Even though the kicker is offset (from the center of the transom), by having a separate throttle I can still maximize control because I can power in and out of turns,” he said. “I trim up my big engine 20 to 30 degrees, but it’s still in the water so it acts as a rudder. I use that setup to troll when musky fishing probably 80% to 90% of the time. I can handle going super-slow, down to less than 1 mph even in calm conditions, and I can go fast with it. I can troll a lot of things.”

It’s worth noting that many anglers prefer a tiller-steer kicker, since the tiller handle allows for instant directional changes. A tiller is also highly effective for slow-trolling along precise contours. Saric prefers remote steering because he can stay at the console and watch his electronics more easily. Plus, because he often trolls at high speeds and with multiple lines, he’s not concerned about giving up a small degree of precision.

Saric’s boat is rigged with a MotorGuide® Xi5 trolling motor. It includes integrated GPS functionality so he can “digitally anchor” the boat, maintain a heading or lock in the speed. He uses solely the Xi5 motor whenever he needs to troll at extremely low speeds, like when creeping along a precise contour or weedbed with live bait.

More often, he uses the bow-mount in combination with his kicker. The kicker provides consistent thrust, while the bow-mount motor is used to steer and counter crosswinds or current.

“I’ll take my kicker motor and put it in gear pointed straight forward and use the bow-mount to control my direction,” Saric explained. “When you’re going at a slow speed and kind of pulling the boat where you want to go as opposed to pushing it, you get a little bit more control from there.

“How you use it also depends on which way the wind is blowing. If it’s really calm, I can just kick the trolling motor on or off to steer right or left. If the wind is coming harder at an angle, I keep the bow-mount skewed in a certain direction (into the wind) on constant speed to maintain a straight line.”

Though transom-mount electric motors are becoming less common due to advancements in bow-mount technology, they still work great for slow-trolling with small johnboats or tiller-steer boats without kickers. One can also be purchased at a substantial cost savings over wireless bow-mounts.

It doesn’t take much to persuade a curious “fish head” like McKeon Roberts to dabble in a type of fishing that’s not exactly in his wheelhouse. Roberts, who lives in Minnesota and is part of the Wired2Fish editorial team, is ...

The new lightweight, tournament-grade Mercury 9.9hp EFI ProKicker has it all: Fast, reliable starting; controlled throttle response in all weather conditions; quick and easy no-mess engine oil and filter change; reliability you can count on and a whole lot more. ...

How to Choose the Correct Size Dockline

Peruse the Mercury Dockstore and you’ll find that among the boating accessories and gear you’ll see an assortment of docklines in different diameters and lengths. Since you depend on those lines to keep your pride and joy safe and secure ...