For the Plautz family, fishing is in the genes. 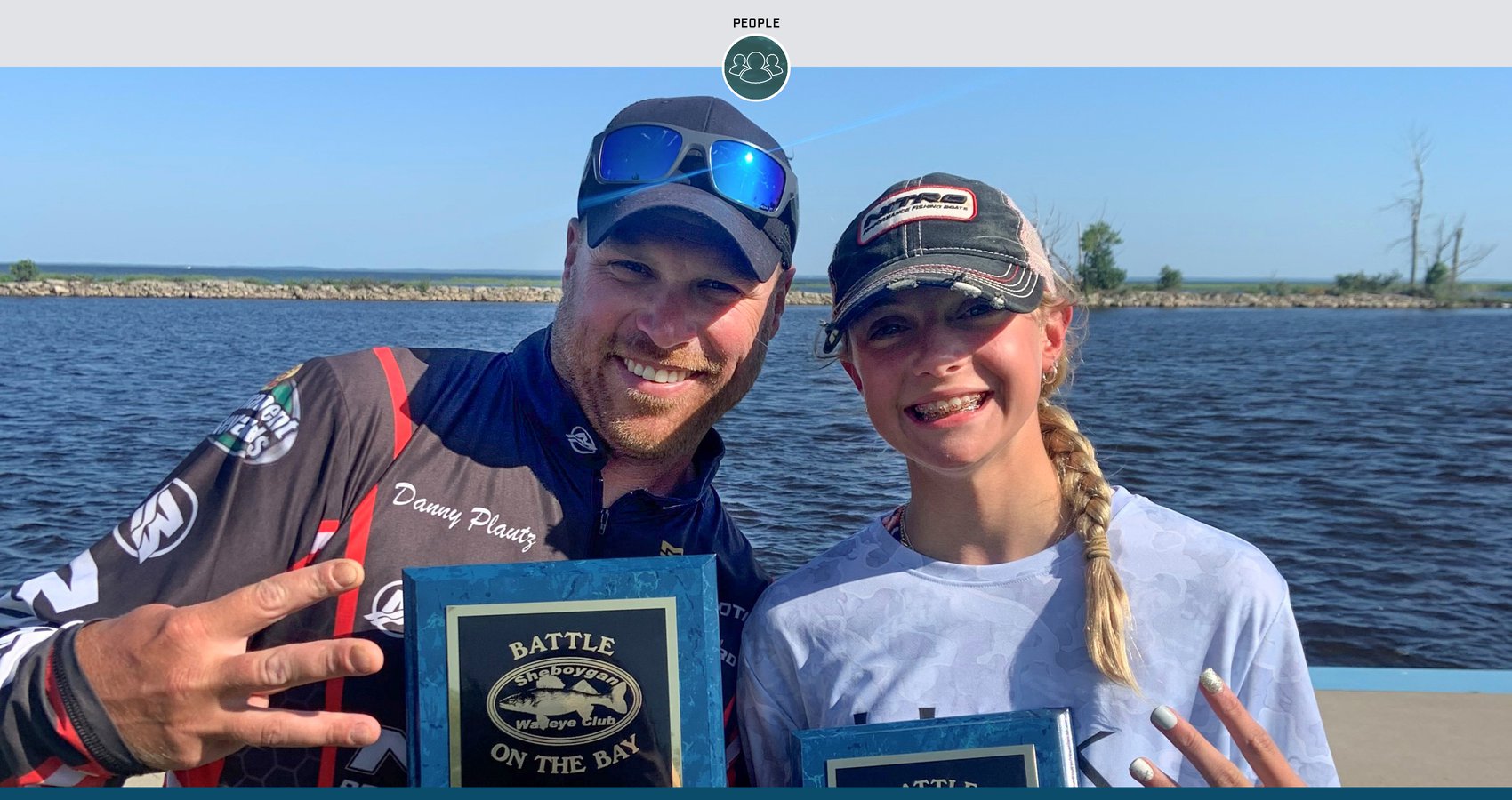 Like a lot of young ladies, 12-year-old Maggie Plautz has a lot on her plate.

For much of the year the rising eighth-grader from Lake Mills, Wisconsin, has dance classes up to six days a week, and, in season, also has a full slate of basketball practices and games. Not to mention keeping up with her schoolwork, an area in which she also excels. And like many kids from the Upper Midwest, she enjoys deer hunting and loves to go fishing with her father whenever she can.

But that’s where the similarities end between Maggie and the average tween. Sure, it’s fun when she goes fishing with her father, professional walleye angler and Mercury Pro Team member Danny Plautz, but they’re playing on a whole different level than the average father-daughter outing. Danny and Maggie have been fishing area walleye tournaments for about two years now, and the pairing is certainly not just a novelty. In fact, they’ve more than held their own in one of the most competitive walleye fishing regions in the country. However, it’s just another extracurricular activity for the youngster, with the added bonus of getting to spend time with her father.

“It’s really just for fun,” she said. “I don’t think of it as anything but fishing with my dad. I love doing it, and it’s just an activity. And I like the experience of standing next to him in front of an audience on the stage.

“And then it’s like, wow, is this really happening?”

While it may be just for fun as Maggie says, the fun has come with a fair bit of success. In fact, the two have earned a place in the Bass Pro Shops and Cabela’s National Team Championship (NTC), Aug. 4-6 in Mobridge, South Dakota. The tournament is one of the most prestigious grassroots-level walleye tournaments in the country, and the Plautz duo will be fishing against a full field of other qualifying teams for a share of an estimated quarter-million-dollar purse, with approximately $100,000 in cash and prizes going to the winning team.

Danny, 40, and Maggie qualified for the NTC by virtue of their third-place finish at the 2021 Battle on the Bay, a large annual Sheboygan Walleye Club tournament on Wisconsin’s Green Bay. There the team boated 10 fish weighing 43.66 pounds, including a 9-plus-pounder. Maggie reeled in every single fish while Danny manned the net. She said her dad was extremely proud when she got the lunker to the boat, but he also had just a touch of envy.

“It was really fun to outfish my dad because he gets a little jealous and very competitive,” she laughed. “But then he started tearing up a little bit.”

Danny is the son of longtime professional walleye angler Dan Plautz, and Danny started out much the same way his daughter did: watching his father at tournaments and getting alongside of him in the boat whenever he could. Right out of high school, Danny scrimped and saved until he had enough money to enter his first professional tournament in 2001.

“I borrowed a boat from a guy for an event on the Detroit River (in Michigan),” Danny said. “I ended up taking second place and winning 25 grand in my first pro tournament, so from there I started fishing professionally.

“Then from there sponsorships started opening up, and I’ve been fishing for walleyes ever since.”

For several years after that Danny fished a dozen or more pro tournaments per year, and has the hardware to prove it. In 2012 he won the FLW Walleye Tour Championship on the Mississippi River in Iowa, and he’s won two prestigious team events fishing with his mother, Barb, with whom he still regularly competes. But like his father before him, Danny eventually decided to focus on family over full-time pro fishing.

“When I finished full time, I was fishing 12 to 15 tournaments a year, and gone away from the family a lot,” he said. “When they were young, they didn't know any better, but I was also missing out on a lot of stuff. Then as my daughter got older, she got interested in hunting and fishing. So then I'm like, ‘I've won championships, I've won tournaments and I've been at the top.’ Now it's kind of like I’m doing what my dad did and introducing the next generation into the sport of walleye fishing.”

He still fishes five to six tournaments a year, but he tends to stay close to home most of the time and spend time with his wife, Rachel, daughter, Maggie, and 6-year-old son, Mason, who is also eager to fish tournaments with his father in a few years. For his day job, Danny manages day-to-day operations for his family’s commercial janitorial service.

And while there are a lot of top anglers who would jump at the chance to fish a major team tournament with a partner like Danny, he said fishing with Maggie has its own advantages as well.

“I can teach her the right way to do things,” he said. “Some of the people I get paired up with are older, of course, and they have their own habits and way of doing things. With Maggie, I can mold her exactly how she needs to perform and teach her exactly what she needs to do at any particular time. She doesn’t know any different, so I get to train her, and that’s made us work as an awesome team at these events.”

Fortunately, Maggie has proved to be an apt pupil with a thirst for knowledge and improvement.

“When he tells me to do something a certain way, I usually remember it and try to keep making sure I don’t make any mistakes,” she said. “And if I do, he doesn’t yell at me. He might get a little bit upset, but we don’t really care. I mean, we take it seriously, but it’s really just for fun.”

For her part Rachel is amazed at how well Maggie juggles schoolwork and all the activities she participates in, and how she is mostly oblivious to the pressure the average person fishing a high-level tournament would feel.

“Honestly, I don’t even know that I could handle her schedule, but she does it so well,” Rachel said. “She loves to dance and play basketball, but also loves to hunt and fish. She’s very, very organized, very determined and very well-rounded.

“When (Danny) asked her to fish a couple of tournaments with him, she was like, ‘Sure, no big deal.’ She doesn’t even know how important what she’s doing is, but we’re super proud of her.

“But for her it’s just fishing with her dad.”

Danny, however, fully recognizes the magnitude of being able to qualify for a major event with his 12-year-old daughter. And while he’s gone head-to-head with the best anglers in walleye fishing and has fished for big money more times than he can count, he simply can’t wait to blast off at the NTC.

“I’ve fished a lot of big tournaments, but this is one I’m so looking forward to,” he said. “I’m putting a lot of time in scouting and preparing for this event. Maggie knows what the prize money is going to be like, and she knows what first place would mean, but I’m still going to make it fun.

“But I’m also going to put a little bit more pressure on myself to give us the chance to do well. That would make it even more special.”

To learn more about the Bass Pro Shops and Cabela’s National Team Championship, or to follow Danny and Maggie in the tournament, click here.

Two years ago, in the midst of a pandemic, Mercury Pro Team member Tom Huynh entered his first walleye tournament on a whim with friend and campground neighbor Nate Wolske. While Huynh considers many traditional walleye methods to be monotonous, ...

Walleye and bass are two of the most popular freshwater gamefish, but often anglers operate in two distinct silos. Bass anglers like to poke fun at the slower deep-V walleye boats and the walleye anglers’ frequent use of live bait, ...