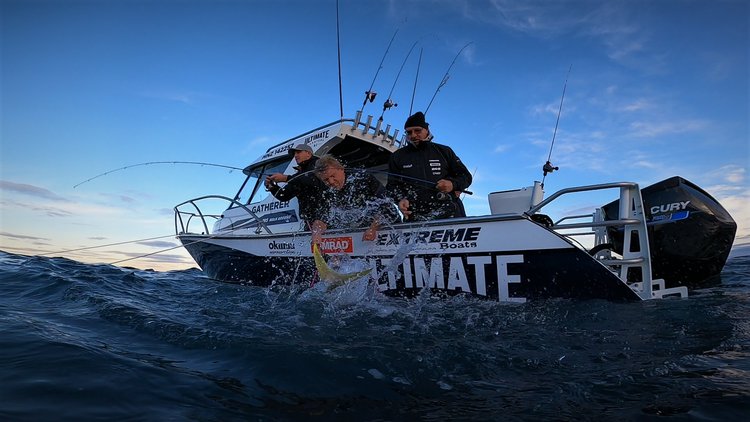 Ultimate Charters’ fleet of four boats is clocking at least 6,000 hours a year.

So, when it came to choosing engines for two brand-new boats to add to the fleet - it wasn’t a decision to take lightly.

But for Auckland-based Simon Brady, the Mercury SeaPro range became an easy choice to settle on.

And now that the freshly built Gatherer is equipped with her 300hp SeaPro Commercial Outboard, there’s one thing every charter passenger is impressed by…

“The first thing people comment on when they jump on board is how quiet the engine is,” Simon said.

“They’re big engines, pushing around six to eight people, the boat and the skipper. But it’s usually a fraction of the noise that our passengers are used to.

“When you’re out on the water powering for a couple of hours to get out to the hunting grounds, the quietness and speed of the engine is significant in creating a good atmosphere for our passengers.

“From our skipper’s perspectives the engine is effortless, it’s smooth and it’s powerful. We’re pushing around a three-tonne boat, plus 900kgs of gear, and the engine does it without missing a beat.”

Ultimate Charters caters for novices through to experienced anglers to embark on a fishing charter experience in Auckland’s outer Hauraki Gulf, chasing big snapper and kingfish all year round.

Having the most up-to-date technology is essential in maintaining smooth sailing for the company, which is why Simon is now working to update his entire fleet.

Using the New Zealand-based boat builder Extreme Boats, Ultimate Charters is now in the process of replacing some of their older boats.

“It’s actually on Extreme Boats’ recommendation that I use Mercury,” Simon said.

“They told me that Mercury is constantly innovating and setting the standard for modern outboards.

“Since equipping the 300hp SeaPro on the first new boat I’ve been stoked with the outboard’s performance and the technology, not to mention the fuel-efficiency.

“In September, the brand-new Hunter will be built and rigged with twin 225hp SeaPro Commercial Outboards. Then we’ll continue to update the fleet and I’m hopeful that I’ll be able to fit them with the new V12 500hp SeaPro.

“I am fully satisfied and confident in my decision to settle on Mercury to power each boat. It’s a well-established, reliable outboard brand that continues to prove itself.”