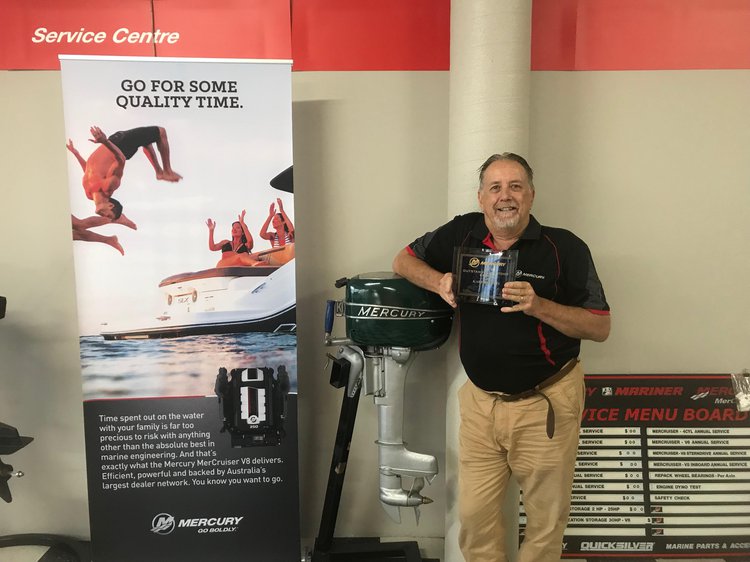 From island hopping on sea planes in the Pacific, to monitoring the police boats in the 2000 Sydney Olympics, when it comes to Mercury and engines – Karl Roberts has seen it all.

Karl was the youngest service rep to ever be employed by Mercury in 1985 as a 26-year-old with a mechanical background in automotive service management, service training and dealer development.

Now, 36 years and many cherished memories later, Karl is ready to take a step back and enjoy a well-deserved retirement with his family.

At home, he has a combined family of seven children, his wife Virginia, and 12 grandchildren.

And at Mercury, the thing he’ll miss most is the work ‘family’ he formed with his co-workers throughout the years.

“Through Australia, New Zealand, Asia and the Pacific I’ve become very close with a lot of the other Mercury service reps. It has been a privilege to be associated with them,” Karl said.

“They are the most dedicated, passionate people that you could hope to work with on a day-to-day basis. They bleed black.”

Karl started at Mercury using spanners to fix the outboard two stroke and MerCruiser models of that era.

“And at the end of my career I was using software to fix the newest V6, V8 or V12 outboards,” Karl said.

“Mercury is a constantly evolving and innovating company, so to provide technical support I had to evolve too.”

“I worked through all of it – from two stroke carburettors to electronic fuel injection, to digital engine management/control systems and Joystick Piloting.”

Working on the engines isn’t the only fond memory that Karl will be left with, in fact – he’s got quite a few to choose between.

“I was a service rep for the Pacific for some time, specifically in Fiji, Vanuata and Tonga. It was the biggest education I’ve had in my life,” said Karl.

“We would host Mariner Outboard clinics for the villagers. They would come from dugout boats from various islands, and we would check their engines, tune them and replace parts.

“For those villagers, without their engine they couldn’t have food. At night they would take the engine off the boat and put it to bed in a little hut. Being able to work with them was a privilege.”

In more recent years, Karl had the immense responsibility of providing close support for Mercury products being used by the military, water police and NSW Roads and Maritime.

Back home, Karl described the frequent experience of being involved with the Mercury Marine Dealer Expos as a presenter and organiser as “unbelievable”.

“But by far the best thing about working for Mercury was the people and the ethos. No other engine manufacturer has boots on the ground like Mercury.

“I’ve had a long and great career, I consider myself to be lucky to have worked with the Mercury team.”

It’s with a bitter-sweetness that Mercury says ‘goodbye’ to Karl.

“It’s been a pleasure to have Karl around for these years. He’s good a great understanding of the technology and an even better understanding of people,” said Mercury Senior Director of Engine Product, Aftersales and Marketing, Nicholas Webb.

“His philosophy as a service rep was to treat people like he would hope to be treated. And given how beloved he is by everyone, it’s safe to say it’s worked a treat.

“We’ll all miss Karl at Mercury, but wish he and his family a long time of happiness and health in retirement.”