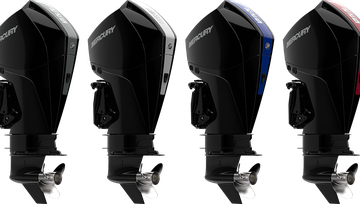 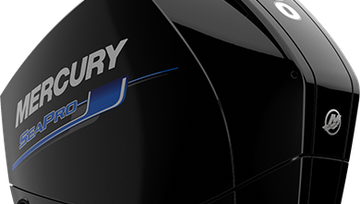 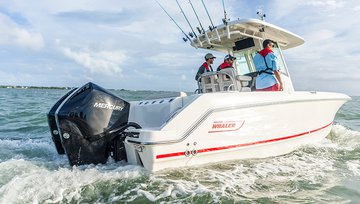 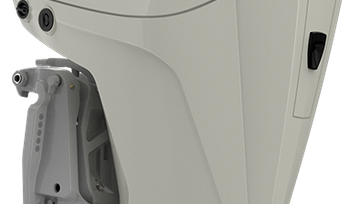 The new Mercury FourStroke and SeaPro outboards are built on Mercury’s new 3.4-liter V6 platform, which is designed to be powerful, light, compact and fuel-efficient. The new V6 engines are precision engineered from skeg to cowl.

“This new platform will position Mercury to advance product leadership in the 175-225hp outboard category, and deliver across the board on consumer needs,” said John Pfeifer, Mercury Marine president. “These new outboards address applications across recreational and commercial applications, strengthen our core product lineup by building off the success of our recent programs and delivering on the requirements of our global customers.”

The 3.4L V6 employs a large displacement, naturally aspirated powerhead and proven mid-section and drive-system designs. Additionally, the 3.4L V6 outboards are exceptionally versatile, offering the option of mechanical or digital controls, hydraulic or power steering, and black or white cowls on FourStroke-branded products.  This versatility makes the new V6 an ideal engine for repower applications.

“These outboards set a new benchmark in the marine industry,” said Pfeifer. “They are the quietest, lightest, smoothest, quickest and most fuel-efficient engines we have produced in this range.”

The new FourStroke engine not only provides large displacement at 200hp, but is also exceptionally light weight at 475 pounds – the lightest weight in its class by more than 10 pounds. Lean and mean, the 3.4L V6 FourStroke boasts Mercury’s best acceleration and 20 percent more torque than the closest four-cylinder competitor at cruise. Fuel efficiency is also unmatched – the new 3.4L V6 FourStroke is calibrated to maximize fuel economy at cruise, yielding an advantage of up to a 15 percent compared to the closest four-cylinder competitor.

Other innovations that further differentiate the 3.4L V6 are:

“Based on what I’m hearing from our customers, we feel like we hit a homerun with the new V6 FourStroke outboard lineup,” said Randy Caruana, Mercury Marine vice president North & Central America, and Asia Pacific. “What a great addition to the portfolio. These engines are light and quiet - to have a V6 that’s lighter than a four-cylinder is just incredible.”

Mercury’s 3.4L, 200hp FourStroke is the company’s largest displacement in 200hp class. At 475 pounds, the engine is also the lightest in its class, and is 35 pounds lighter than current product in this range. With its performance-inspired dual overhead cam (quad cam) and four- valve design, the engine will reach higher speeds, faster. In addition, this outboard is the only one of its kind that maintains rpm regardless of load or condition changes and provides a “sportier” feel to the drivers.

In addition, the new engines provide fuel savings to the consumer. At cruise and at WOT, the new four-stroke outboards take advantage of Mercury’s proprietary “Advanced Range Optimization” (ARO) calibration to generate greater fuel efficiency than the engine it is replacing and the closest four-cylinder competitor.

In addition to Mercury’s legendary black engines, this new lineup offers three shades of white available for the 200hp and 225hp outboards.

The Mercury SeaPro 200hp 3.4L V6 four-stroke outboard sports the company’s largest displacement in its class. It’s also is the lightest engine in its class and is approximately 25 pounds lighter than the engine it is replacing. Like all Mercury SeaPro outboard engines, the 3.4L V6 four-stroke is built for durability and reliability and is calibrated for commercial usage.

Like the 3.4L V6 175-225hp FourStroke outboards, the new 200hp V6 SeaPro outboard features "Advanced Range Optimization/ARO" calibration, which was developed by Mercury engineers to optimize cruise fuel economy. The ECU will adjust fueling automatically when conditions are right.  It does this so seamlessly that the operator won’t feel or hear it.  ARO allows for optimal fuel efficiency, giving consumers the confidence to stay out on the water longer.

“The quick-access door on the top of the cowl gives the customer the access they need,” said Rob Kaidy, SeaVee Boats vice president of engineering. “There’s nothing else like that on the market today. When you open that door, in order to disengage the cowl, you hit a button and that turns into a handle; that’s brilliant – a simple idea executed well, a tremendous asset to the customer.”

“This will give us an opportunity to hit a unique price point and offer high-horsepower ranges that we weren’t able to offer in in the past,” said Shane Torzy, Crest Boats director of sales and marketing. “It’ll give us an edge when we partner with you guys and get it into the market.”