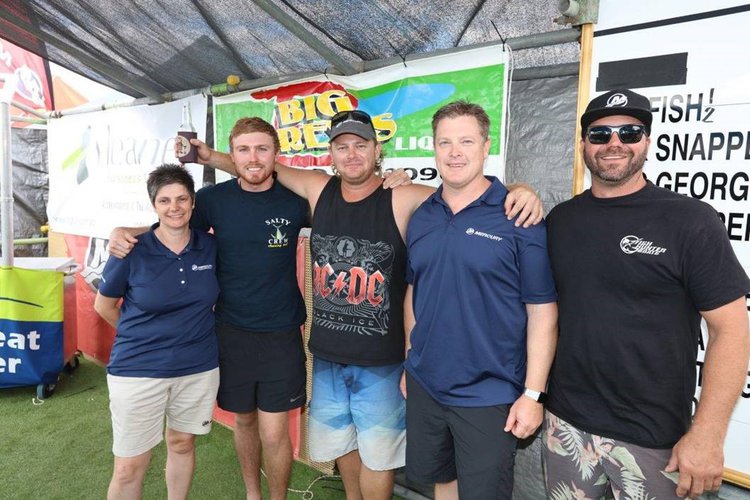 With 136 boats, some 350 competitors and 400-500 people attending the weigh-in, this year’s Hinds-Kitchen Classic was another huge success for the Mangles Bay Fishing Club, just south of Perth.

But it wasn’t all about the event’s great atmosphere and terrific location, there was also some $75,000 in prizes up for grabs, headlined by two brand new Mercury motors – 6hp and 15hp FourStroke portable outboards!

With competitors chasing 15 listed fish species, and with special categories for heaviest speared fish and heaviest crayfish caught by a diver, there was something for everyone, and everyone got stuck in over the two days of competition.

Local Mercury Dealer, Midway Marine, has been a key sponsor of the the Mangles Bay Fishing Club for a number of years and had a big presence during the tournament – putting three boats on display and providing the two FourStrokes for the prize pot.

“It’s a really, really good fishing club,” said Warwick Rann, Principal at Midway Marine, “and the competition this year just went off. It was a big hit and we’re really happy to be a supporter.”

To ensure the two Mercury engines could be won by anyone – young or old, experienced or not – they were awarded based on social media pictures which had to include a competitor, a fish and a Mercury logo.

“It was a bit of fun and it opened up the competition which we though was important,” Warwick said. “We scrolled through the images and just picked the ones we liked!” And the winners were more than happy.

Chad Stewart, who was the tournament’s overall winner, collected the Mercury 15hp FourStroke with his big Dhufish, while Lee Sampson took home the Mercury 6hp FourStroke after catching a very nice Queen Snapper.

“Mercury has been involved for four years now and this event just keeps getting bigger and better which is a win all round,” she said.

“It was a really vibrant, fun weekend so congratulations to the Club for a great event and let’s make next year even better!”