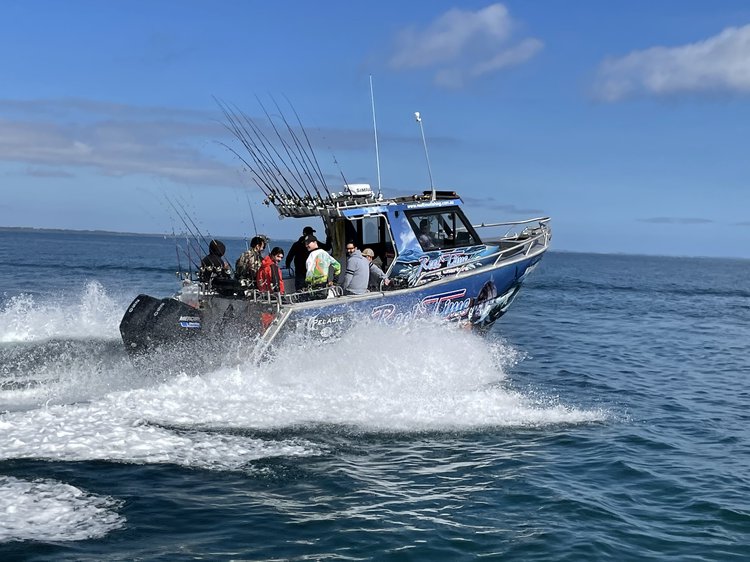 For Matt Cini’s Victorian-based Reel Time Fishing Charters, COVID has been good news for him and bad news for fish.

“We had a pause when people couldn’t go outdoors, but around the middle of October when we reopened our doors it was just chaos,” Matt said.

“We’re struggling to keep up with demand for people wanting to go fishing and enjoy the outdoors. It’s crazy,” said Matt.

Now, both his two charter vessels are being powered by Mercury SeaPro V8 engines.

The Mercury SeaPro is engineered from the skeg to cowl to withstand the rigors of commercial use. Built using heavy-duty components, SeaPro engines are backed by a dedicated commercial warranty that includes protection against corrosion.

The latest upgrade to the SeaPro V8 has just been made on Jeffrey, named in honour of his grandfather’s favourite nickname. The engines on Jeffrey need to push four-tonnes through the water – and that’s before you add up to eight customers and gear.

The sister vessel Undercover is already powered by two 250hp SeaPro V8s and, having just hit their 1500-hour service, it’s fair to say he’s thrilled with the results.

“It runs like a sports car. When Mercury came out with the SeaPro with the bigger gearbox, lighter engine and more torque, it was like a dream come true,” said Matt.

“The change to the SeaPro V8 was just phenomenal. I had always been pretty happy with the L4 Verados, but when I looked at the SeaPro it just ticked all of the boxes I needed for a commercial engine.”

Averaging 1250-hours a year per engine across the waters of Port Phillip Bay and the Mornington Peninsula, Matt needs good power, good reliability and good economy.

“I’ve had three different engines on the Jeffrey over the 9000 hours of use the vessel has had. You can tell when you have the right engine, because you can hear that it’s not working, it’s not under any load.

“It cruises at 25 knots at 3800rpm, and that’s awesome for a charter boat because that’s not usually the type of speed you can do every day.”

And that extra power is translating into better fuel economy.

“At 3800rpm it’s using about 36 litres per hour per engine. On a normal charter hunting Kingfish with the Verado L4s engines we were averaging up to 260 litres per day and now we average between 170 and 200 litres.

“For a four-tonne vessel, I’m exceptionally happy with that economy.”

Matt does most of his fishing between October and April in Martha Cove and Carrum, looking for King George Whiting, Squid, Snapper, Yellow-tail Kingfish and Southern Bluefin Tuna. He also participates in the yearly Southern Bluefin Tuna hunt in Portland on the Southwest coast of Victoria. While he’s fishing, he finds SeaPro’s adaptive speed control works well in his favour.

“I love the way they hold their revs in the turns and in the waves, I’m never on and off the throttle. I can just set it and forget, and it doesn’t matter what I do it just holds the revs. And that’s of a real benefit to me. I drove a boat without it the other day and it just did my head in!”

To watch Matt give an in-depth review of the 250HP Mercury SeaPro V8, check out this video on the Mercury Marine YouTube channel.